REPLY & QUOTE
outlaws (Kevin) said
Does anyone make a 1/24 or 1/25 scale model of the Adam-12 police cars? (specifically the 1972 Matador or the later Plymouth)

Try a company called policemodels.com, I have gotten kits and parts from them and they are very good and quick, good luck

AMT made a few Matadors back in the day, but to my knowledge none of them were the correct years for the Adam-12 car. I do know that there was a kit of Bobby Allison's Matador, but it was a '75 and kitted as a race car.

You might have better luck with the '71 Satellite. Over the years, Monogram/Revell has released the '71 as both a Satellite and a GTX, with the GTX currently listed in their catalog. This kit would need a good amount of scratchbuilding to turn it into an accurate police cruiser, but it would be a place to start.

As previously stated, Policecarmodels.com has a lot of good police stuff, but they don't stock the Revell GTX kit. If you can't find it locally, Model Roundup has it in listed in their online catalog.

REPLY & QUOTE
YesVirginia (Yes Virginia) said
There is a Santa Claus. I cannot make out the manufacturer of this kit, but it did, indeed, exist. There was also a cox engine model that was made in the 70's.

REPLY & QUOTE
YesVirginia (Yes Virginia) said
After a bit more research, I am pretty certain that this is a MPC (manufacturer) model kit, based on the logo in the lower right corner of the box. However, it's an early kit so I cannot be for certain.

REPLY & QUOTE
viper29_ca (Scott Millican) said
It is an early kit, and no longer in production.

However it may not hurt to throw Round 2 an e-mail (they own the rights to all the AMT, MPC, Polar Lights and Ertl molds for the next 10years), and see if:

2. What the likely hood of re-releasing it might be 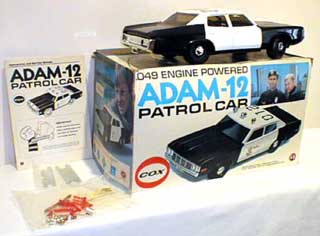 REPLY & QUOTE
kay7015 (Deborah Hughbanks) said
I am having a hard time finding this Cox Adam 12 Patrol Car. I tryied Policemodels.com any other ideas on where to find one? None on ebay at this time.

REPLY & QUOTE
old-dragon (Bob Chawgo) said
Technicaly this should be in the "cars" section..but hey, while I'm here-
Ok, 1st off, there's really no similarity between the '71 coupes and sedans and the best bet is to look for a promo car to build up...I'd bet you'll spend roughly $60-$80 on it at a guess..? I'm not sure there ever was a model of the '71 satellite - but that doesn't mean there wasn't...I just have no recollection of one. If there was think 3 digits for the kit for it's rarity...look for a promo since it'll be cheaper!
2ndly...ok, you know what a '71 satellite/roadrunner/gtx "coupe" looks like right, so here is a video of what the sedan{4 door} looks like;
'71 plymouth sedan
Sorry, not trying to burst your bubble here, but this is one of those cars that really never got to be a mainstream model. My wanted kit would be a 1/25 '76 Pontiac Grand Am.......none ever made.

REPLY & QUOTE
-I say I have two kids- one son & one daughter...my wife says she has three- one son ,one daughter and one husband.

...and don't tell yourself you can't do it....it'll just take longer then