REPLY & QUOTE
ltb073 (Sal) said
Some nice work by everyone here I hope to get started soon on my built but I have a question for the Campaign Leader.
Will a Krupp Protze

be considered a Workhorse? There was over 7000 units produced and was heavily used to tow artillery, especially the PaK 36, and transport motorized infantry.

If approved that will be my entry 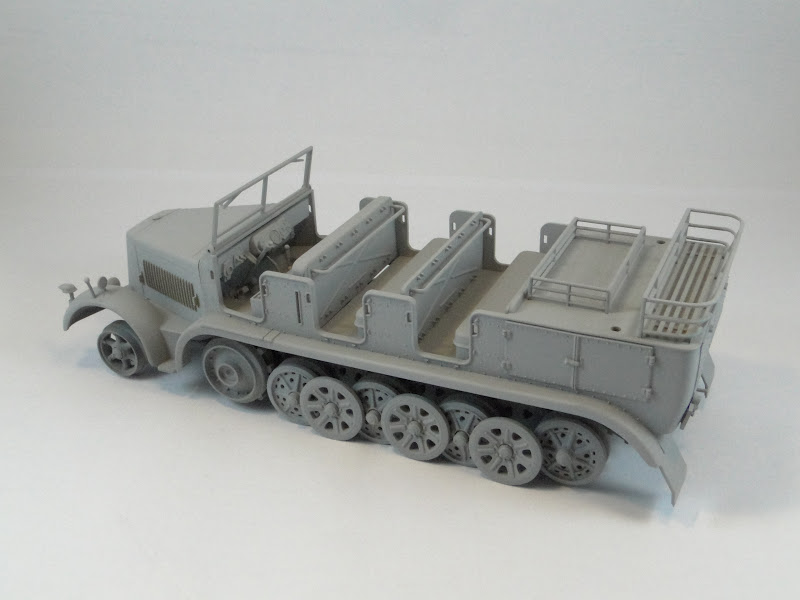 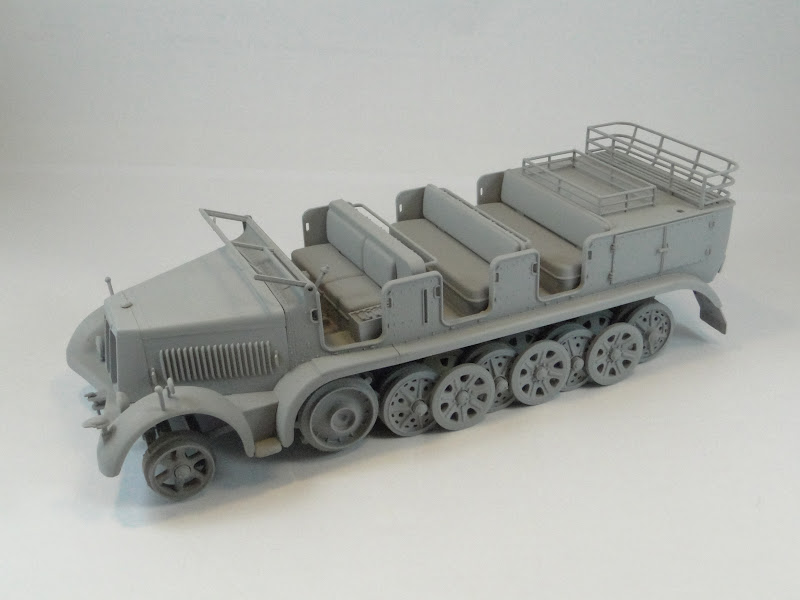 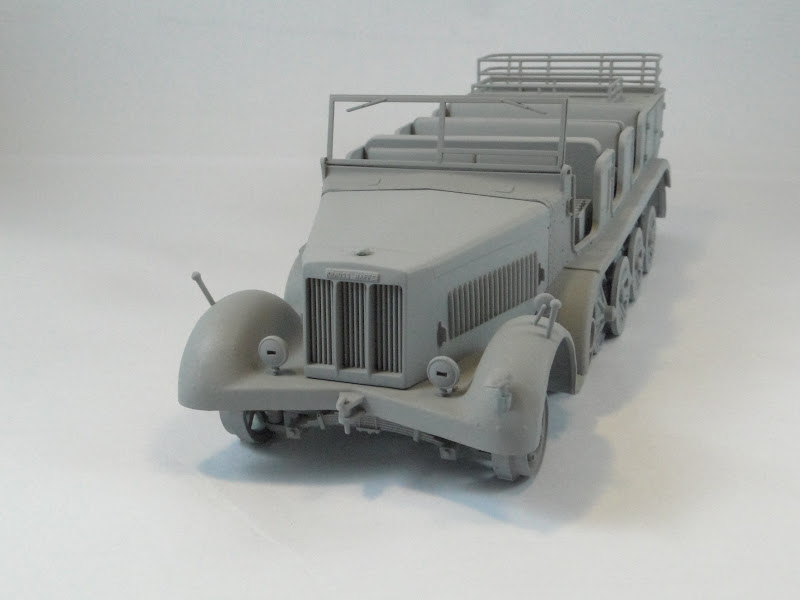 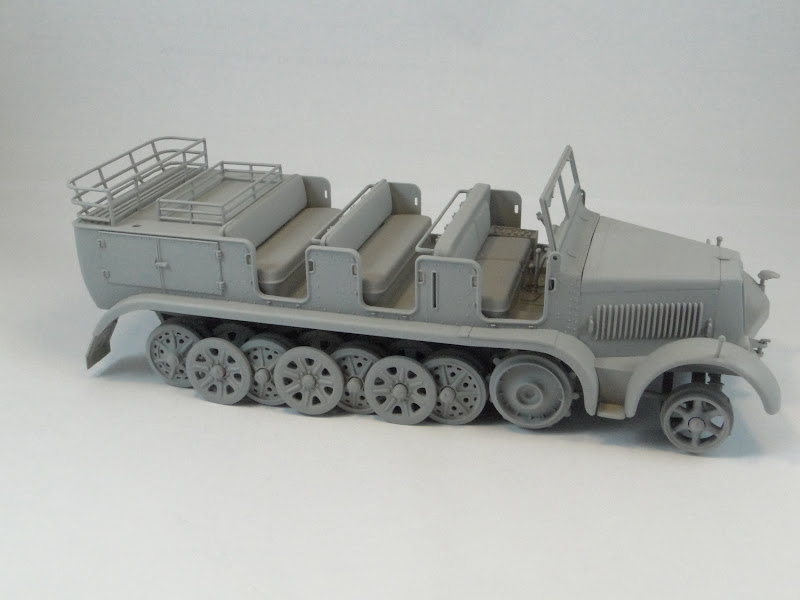 REPLY & QUOTE
pablo_g (Paweł Grzondziel) said
Hi,
Mark, your Quad looks cool. I like details that you've done on front bumper. It is some pics of progress on my Sd.Kfz 7, next will be washing and primer. Model is not assembly, so I'll have easier task with painting. 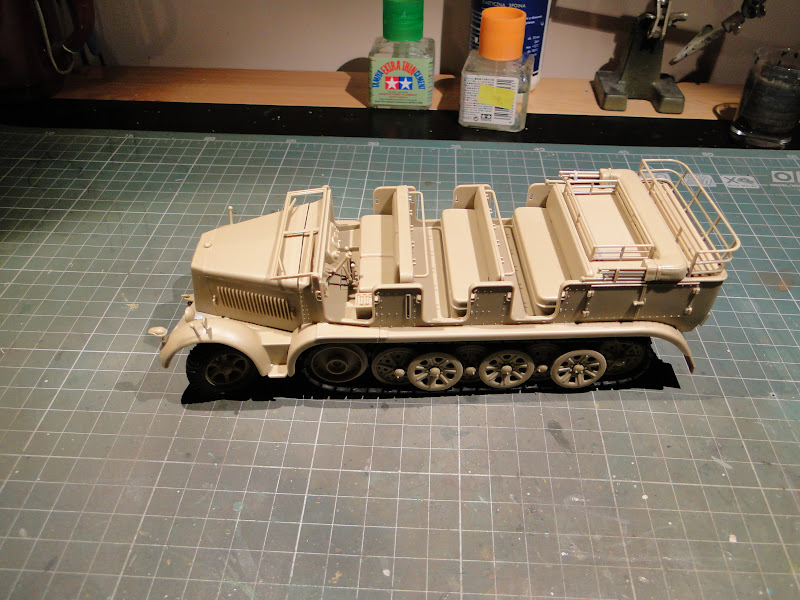 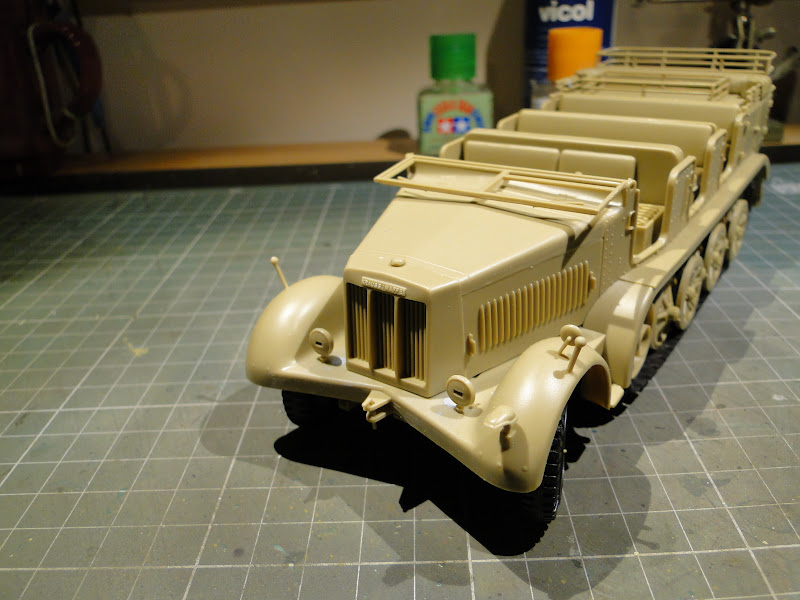 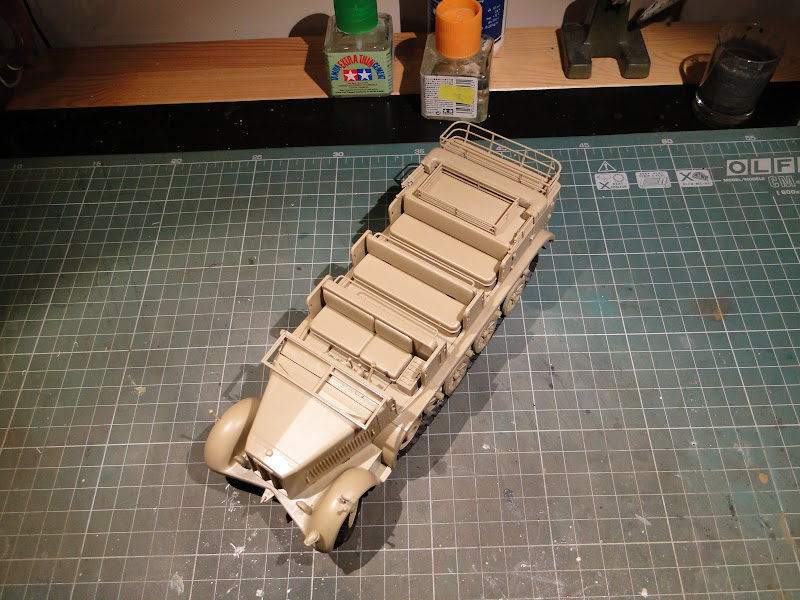 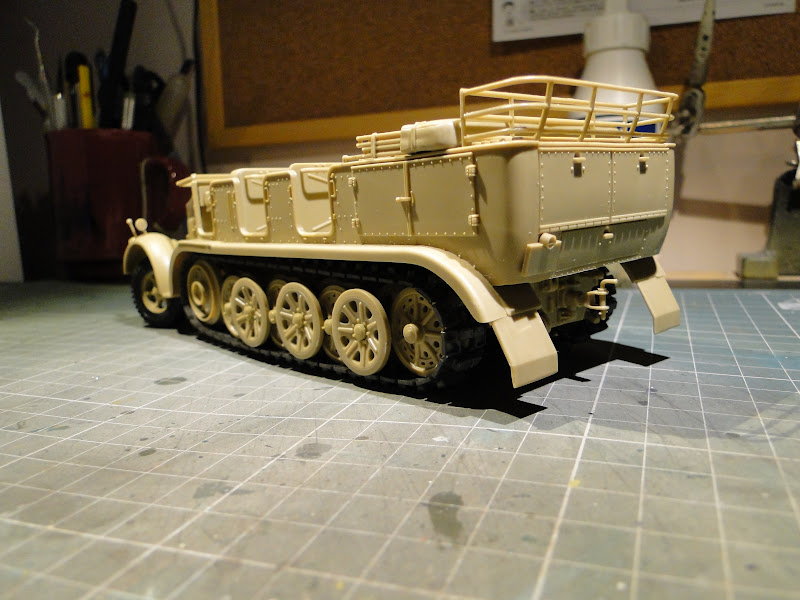 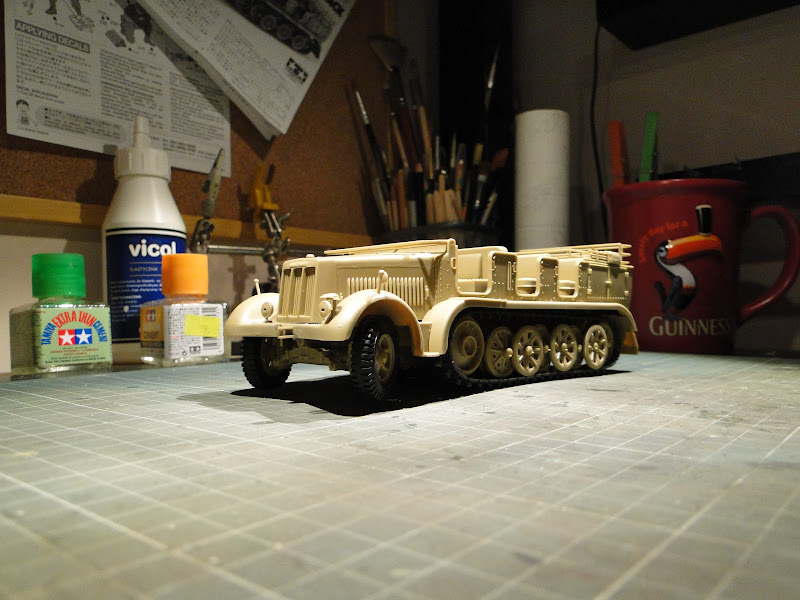 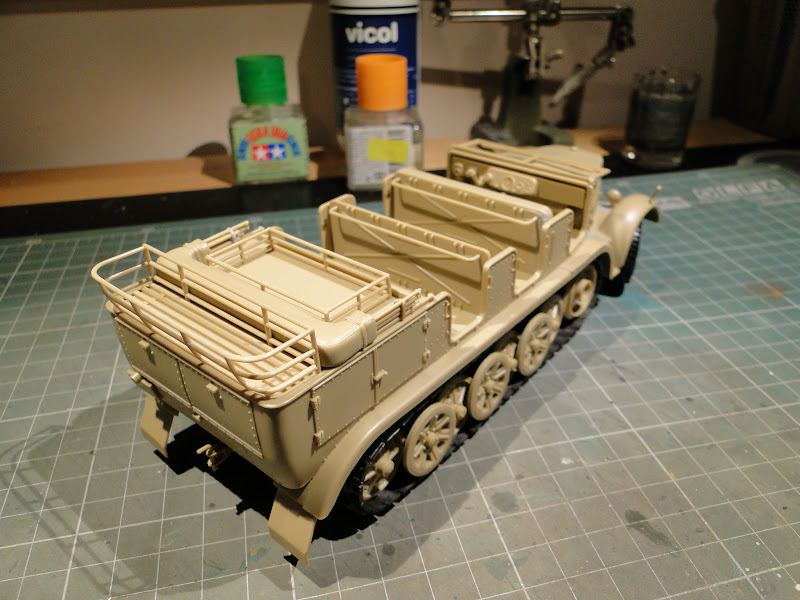 The motor and exhaust are just dry fit until the whole thing gets re-primed then will be painted separately. Re-worked the front bumper to replace the molded-in tow shackles and open up the front winch guide rollers:

REPLY & QUOTE
erichvon (Karl Flavell) said
I wish I'd noticed this campaign earlier. I've just finished two Krupp Protzes, the cargo version not AT! Buggar! Fortunately I have two Mercedes Benz L3000's to build. Would they be okay? If so I'm in with one of those as at the moment I'm building stuff for a dio I've got planned and I plan on filling one of these with fuel drums for a fuel and ammo dump that will be part of the dio.

REPLY & QUOTE
Nothing is so exhilarating in life as to be shot at with no result.
- Winston Churchill

REPLY & QUOTE
pablo_g (Paweł Grzondziel) said
I have both models and looking for opportunities to build it together. Initially, also wanted to build a Quad Gun Tractor but changed his mind, I can see that he is very popular here.

I have a version with a gun.

REPLY & QUOTE
pablo_g (Paweł Grzondziel) said
Hi,
I start build this model, I want to build to him 88mm AA gun in "Flak you to: The Flak is back!" campaign. 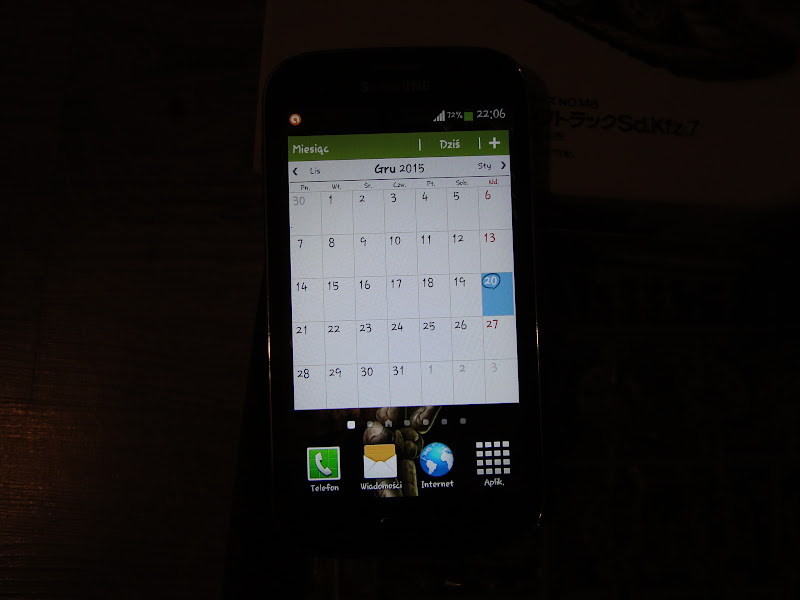 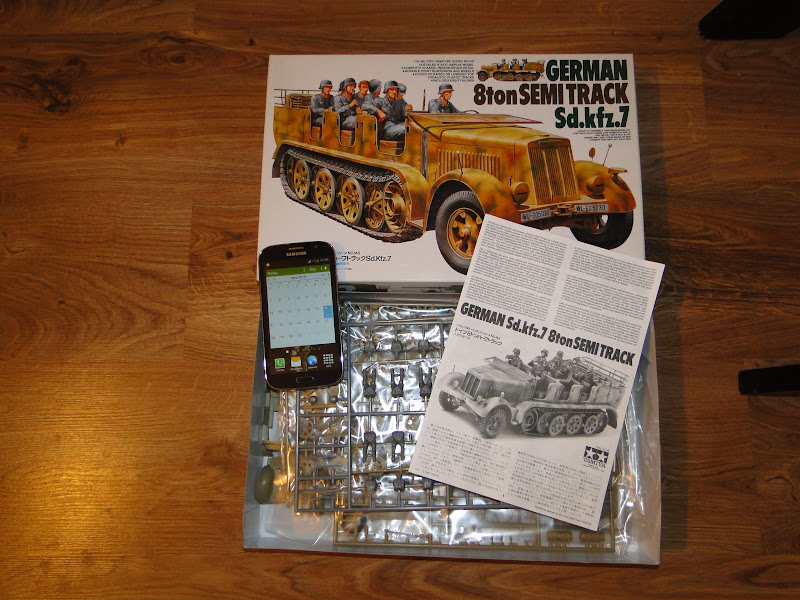 REPLY & QUOTE
Namabiiru (Mark C.) said
Oops! I had been working for about an hour when I realized I never posted my starting photo. Hope I don't get disqualified! Picked up this kit still in plastic at a second-hand store just before the movers packed us up in August. Just now getting around to starting it after finishing up another campaign build.

As you can see in the picture, I'm also adding DEF Models resin wheels.

Couldn't find any actual photos but heres a screenshot that I pulled from YouTube of a scratch-built 1/6 scale Opel Blitz showing the exhaust pipe hanger detail (3:27 into the video).

This is to make sure I get on and do this!

REPLY & QUOTE
spongya (Andras) said
I have a miniart US Armoured Bulldozer to review; I'd like to build it for a feature as well. So I'd go with that one.

REPLY & QUOTE
CaptCrunch81 (Dillon) said
My build on this campaign will be this US Armour ed bulldozer by miniart. I looks like a great kit

This will be my build:-

REPLY & QUOTE
Naseby (Jacob) said
Well since the campaign is already well on the way Id better not waist any more time. I have started to work on AFV Clubs Kfz.11. I guess this vehicle would be eligible since it was designed to tow guns. The kit looks good so far, but contrary to what numerous review say it DOES have pin marks, they are visible and theres a lot of them.

REPLY & QUOTE
Naseby (Jacob) said
I know Im a bit late to the party, but would it be possible to enter this campaign with a Kfz.11 ?

Couldn't find any actual photos but heres a screenshot that I pulled from YouTube of a scratch-built 1/6 scale Opel Blitz showing the exhaust pipe hanger detail (3:27 into the video).

Q. Any actual pics of how the exhaust tube hangs under the chassis I means the support of the tube at aft . ? Regards from the south
Alvaro

Johan, you got me going with your PE work. So along with a resin wheel set, I went and ordered a PE upgrade for the CMP Chevy C60L GS Truck Cab 13.  Out of the box gone out of control!

Simon: Looking good! You are speeding ahead!

REPLY & QUOTE
scribbles101 (Simon.L) said
I have been working away on the Albion at quite a rate this week, and so it is pretty much finished, I still need to do some more weathering and apply the decals, but so far, I am pleased with the result!

The cab, now the handbrake here is a little heath robinson as my scratch building skills are somewhat lacking to put it kindly, and the original was lost to the dreaded carpet monster, so I did what I could with a piece of sprue, an off-cut from an old guitar string, and a little filler

Weathering in progress underneath

here is the basic Albion AM463 as used in a multitude of roles by the British armed forces during the second world war pretty much completed.

Getting a little more role specific with the addition of the fuel tank and pump.

Nothing more right now, but more soon, sorry this has been a bit of a long one but this is a much more simple build than I was expecting, Airfix have seriously stepped up their game recently and their new tool kits are very impressive, especially compared to their older offerings! I still wouldn't compare them to to likes of Tamiya, but the new releases are really nice kits!

REPLY & QUOTE
justsendit (Mike Freeman) said
Johan, you got me going with your PE work. So along with a resin wheel set, I went and ordered a PE upgrade for the CMP Chevy C60L GS Truck Cab 13.  Out of the box gone out of control!