REPLY & QUOTE
jasegreene (Jason Greene) said
Just impressive!!!Still remember watching "Stripes" when I was young and there was the one that was suppose to be Czechoslovkian.

Thanks for very encouraging feedback, much appreciated!

Jacob, after gluing all those pc strips, I think I already have one foot in the asylum, buddy. :-)

Gary, now wouldn't that be something: a fully functional engine in 1/35? I'll bet somebody will do it one day (not me, haha!)

Jason, I had no idea Gama Goats were used in Czechoslovakia, I must look that up. Perhaps a cool paint scheme.

REPLY & QUOTE
young_sven (Sven Young) said
Thank you very much Brent for your kind comments and for wanting to follow the build. I am very pleased that you like it.

Just impressive!!!Still remember watching "Stripes" when I was young and there was the one that was suppose to be Czechoslovkian.

REPLY & QUOTE
Looking to meet other MN Armor modellers. I live in Buffalo.

REPLY & QUOTE
young_sven (Sven Young) said
Thanks for posting that Dan. I am embarrased to say I thought Stripes was a more reality based program, hence my interest in a Gama Goat used by Czechoslovakia.

I decided to take a break from the tractor and engine build, and get started on the shelter.

My first intention was to use the Plus Model S-250 shelter since it provides a bit of an interior, and the door can be mounted in the open position. Sadly, after purchasing it I discovered that it does not fit the Gama Goat trailer, and also - as far as I can understand - depicts a later version of the shelter than I want.

So, what other choice is there but to scratch build one?

Fortunately, I was able to find some good drawings with measurements on the internet, which were of great help.

After the engine, this felt pretty simple, just some slab-sided walls to cut out and glue together.

The door, however, is a fairly complicated affair in "real life", so I have tried to capture this detail as much as possible.

Other than that, the only time-consuming part has been to add slats to the "windows" and door. Not quite done, after doing all those slats on the engine hatch I am taking my time so I don't burn myself out on the boring bits :-)

Nothing too exciting in other words, but to keep this blogg moving forwards here are some pics.

Those with sharp eyes will notice that I glued the two side walls, and then had to remove one to give me access to the windows to mount the slats - oops! :-)

As far as the interior is concerned, I am very tempted to deck this thing out with communication equipment (AN/GRC-122 or AN/GRC-142 setups). We'll see how much energy I have for this when the time comes, since none of this equipment is available in 1/35 scale (as far as I know). 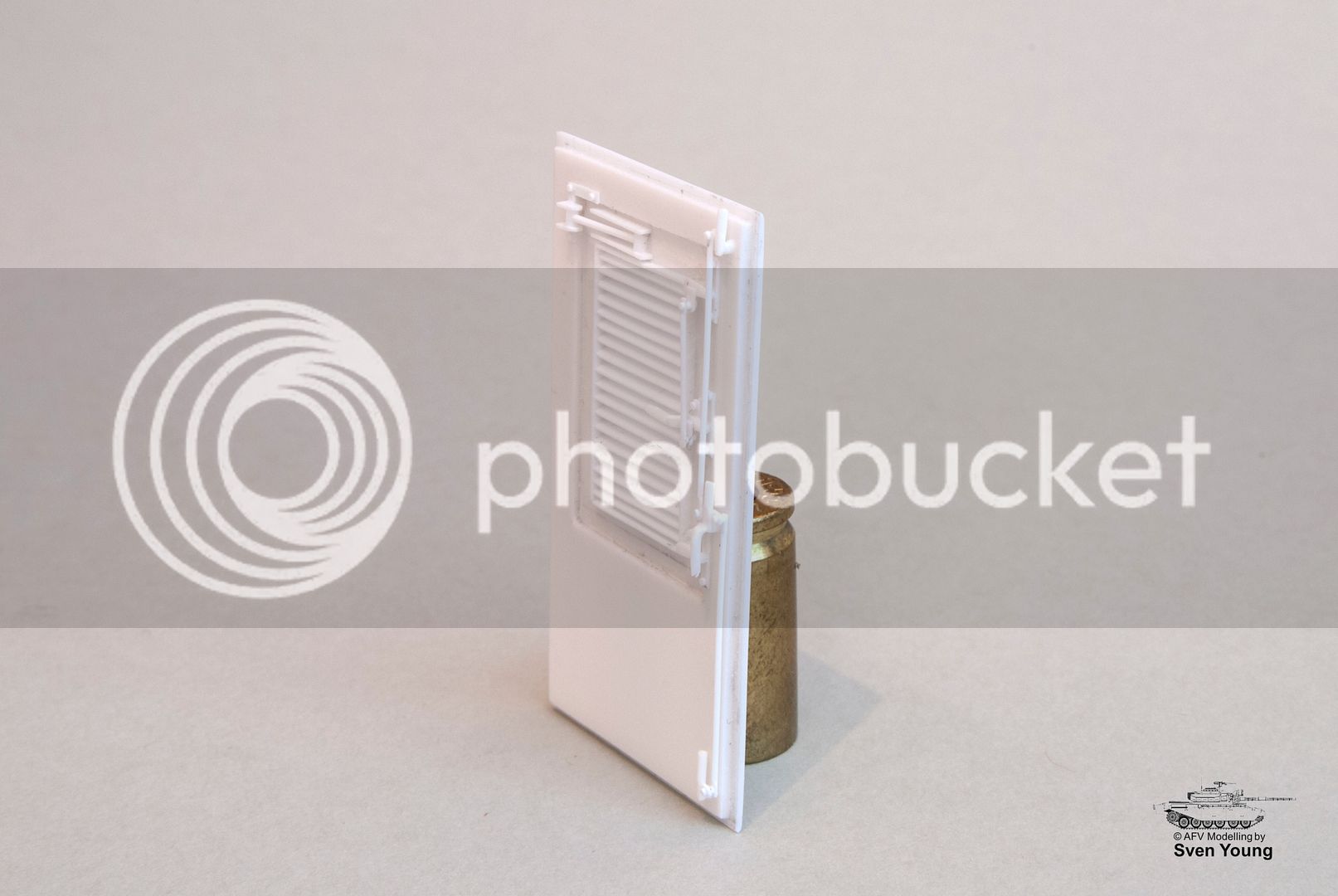 REPLY & QUOTE
young_sven (Sven Young) said
This is becoming slightly slower work now as I work on the interior of the shelter. There is a lot of coms kit which needs to be built, and as I mentioned in the previous post, none of it is available in 1/35.

The interior work is still only in the beginning stages. All the "boxes" in one of the pics below will eventually be one piece of equipment (radios, teletypes, junction boxes etc), so lots more to do - and then of course all the wiring. Remember, this is the 80's so there will be no laptops and other slim and ultra portable equipment here :-)

The door is now almost complete, just the door handles and a couple of other details to add on the outside.

REPLY & QUOTE
sgtsauer (Brent Sauer) said
I'm loving the interior work. It will be a shame to cover that up. You need to use something clear for the top of the shelter so viewers can see through it.

Is your communications equipment scratchbuilt or from a set?

What are your tools for scratchbuilding? I remember seeing chopper for working with styrene.

Brent, I am hoping that the interior will be visible enough through the front door, and plan to add lighting as well. However, a clear roof (at least partially clear) is a thought (or perhaps a removable roof).. :-)

The communication equipment is all scratchbuilt. Unfortunately there are no commercial sets that I am aware of in 1/35.

Mario, haha, you are not the first person to call me crazy, and by the time I am done with this interior and all the coms kit I am sure I will be.. :-)

The only "special" tools I use are my trusty punch and dies (I have over the past couple of years invested in all four of the RP Toolz punches for rivets, circular and hex bolts -not cheap, but absolutely fabulous equipment. I could not do without them). My trusty Historex P&D was pretty much worn out. Other than these and the chopper, I mainly use an X-acto knife, steel rulers and various files and sanding sticks to cut and shape the parts.

REPLY & QUOTE
young_sven (Sven Young) said
Hi Richard, thanks for your comment. Please do accept my apology for me being a little slow on the uptake, but I am not sure what you are referring to. Could you elaborate? :-)

REPLY & QUOTE
Hederstierna (Jacob Hederstierna-Johnse) said
Hi Sven
I'd go for the removable roof instead of the see-through. Personally I don't like these see-through parts on models, but that's just me.
Jacob

I am inclined to agree with you , a removable roof would be the best way to go, as long as I can manage to make it look good.

The challenge with removable roofs (or hull tops, or turret roofs for that matter) is to make them look as if they are actually fixed in place. Sometimes they simply look "loose" which detracts from the overall.

I don't think I am able to make a transparent roof look convincing either, so perhaps the best route is as I did with my M113 - interior lighting and having the interior visible through the existing hatches (in the case of this shelter that would be the main door)..

I agree. Your point on removable or transparent roof is valid and I'm pretty sure interior lighting is the way to go. You already did a spectacular job on the M113, so I know you can do it again.

Thanks for your kind encouragement.

Interior lighting was my initial intention, and I think I will stick with that.

The door is fairly wide and allows for good visibility inside, only the rear corners of the shelter are more or less invisible.

Not sure if any of these shelters had a roof hatch, otherwise an open roof hatch could have been a way forward as well (in addition to the interior lighting).

So as it stands now its all wall and roof panels glued in place, door open, and interior lighting fitted. :-)

REPLY & QUOTE
Maki (Mario Matijasic) said
Sven, have you considered making masters of your stuff? I'm sure some aftermarket companies would be interested in producing these...

Thanks for asking! Interestingly enough, that question has come up a couple of time just these past few days.

I have never really thought about it in the past, mainly because my time is pretty limited so when I am building I just make the parts I need so I can use them immediately, instead of considering the long term possibilities by making masters instead.

Also, I am not sure I am capable enough to make masters for a moulding process. Its one thing constructing one-off arts for a build, but I think it takes a completely different way of working to make masters that can be used for moulding..

I am nearing the end of building the coms equipment now, the shelf is starting to look suitably busy.

Still a lot of wiring (well, all of it) left to do, and some smaller distribution boxes, shelter heater, drawers etc to add, but these are the main elements.

(Yes, I spelt teletypewriter wrong, and now I can't edit that pic - I guess Photobucket is not the best text editor on the planet :-) )

REPLY & QUOTE
Hederstierna (Jacob Hederstierna-Johnse) said
Well Sven, I'm sure this will look great through the open door with the light and all. Are you going to do the same red/clear light, as you did in the 113?
AND, at this pace, I'm sure I'll see the finished model in October

Yes, I plan to do the clear/red light again just as on the M113. However, I think I will settle with one of each this time instead of 3+2 as I had in the M113. that was WAY to much wiring to fuss with, haha.

Haha, yes lets see if this can be done by October. I'll do my best :-)

Well when can I expect the casts from these? LOL

Sorry for the slow response, I totally missed your post.

Casts probably won't be forthcoming, I'm afraid, I lack the knowledge and skill for it.

Thanks for the encouragement, though, perhaps one day