Campaigns
Where Armorama group builds can be discussed, organized, and updates posted.
Hosted by Darren Baker, Richard S.
Once More Unto the Breach

Entering in with Meng's BMR-3M. 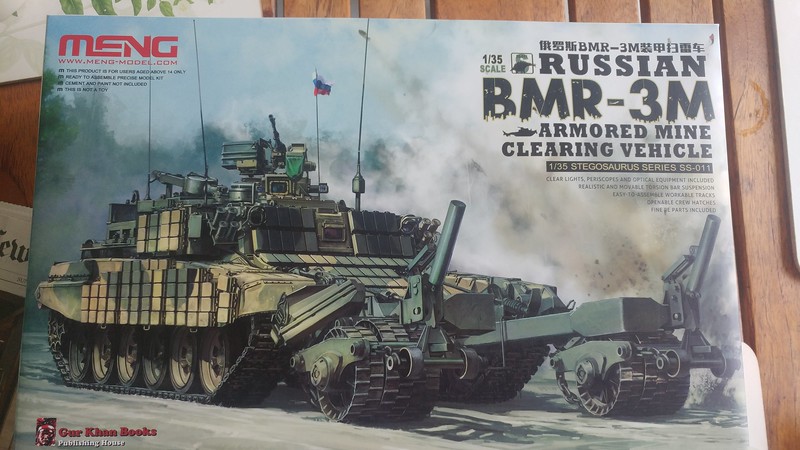 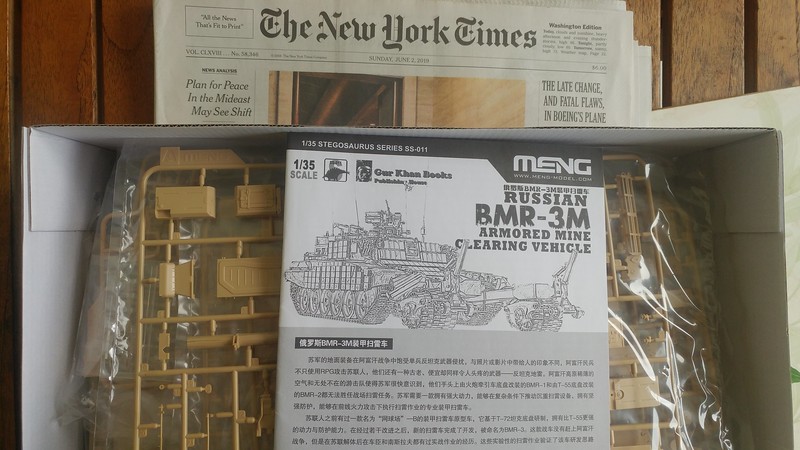 REPLY & QUOTE
GulfWarrior (Richard S.) said
Wow! That looks awesome, Nate! We'll definitely be watching your work on this one!

Welcome to the campaign! 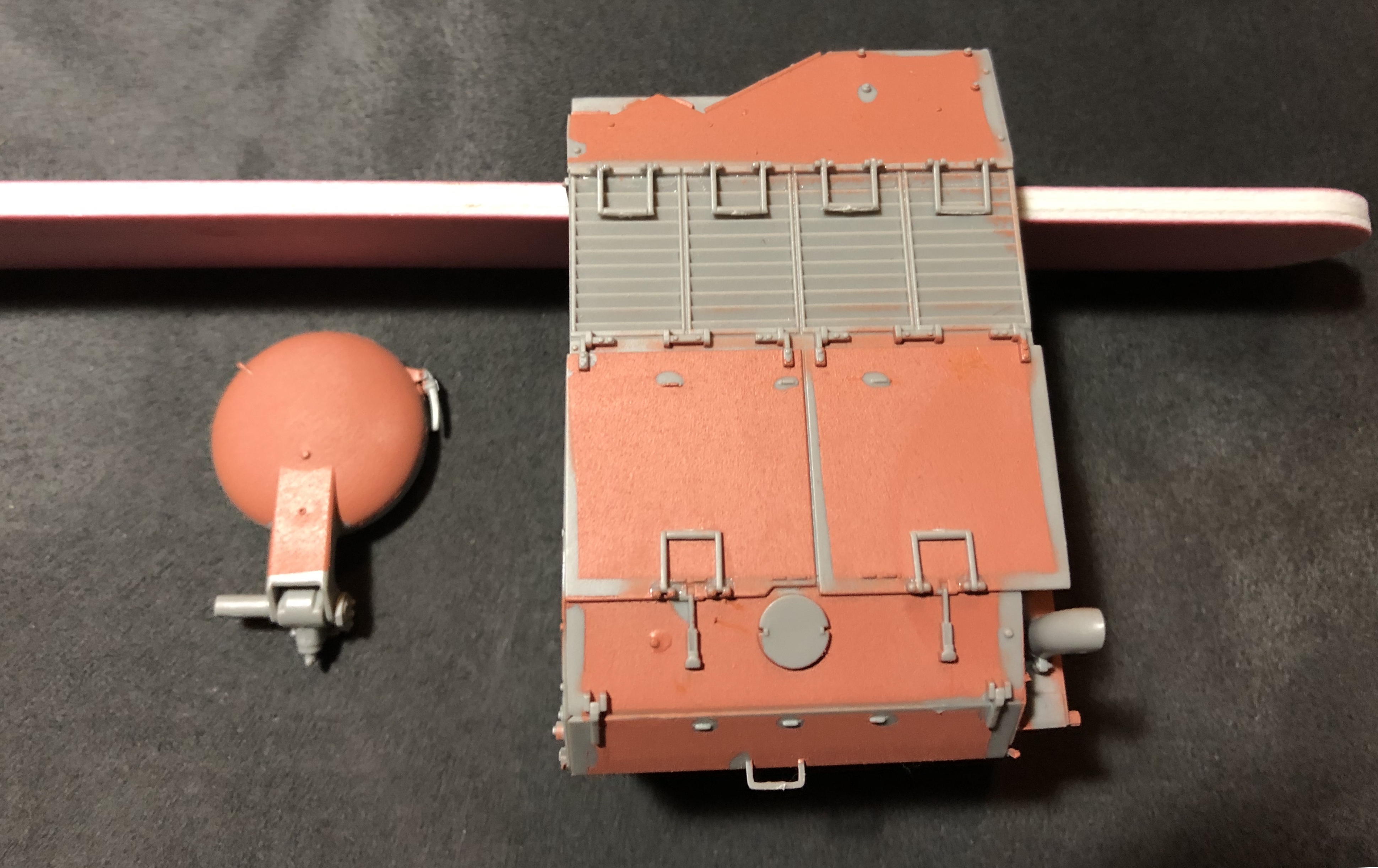 Hopefully this weekend I'll get to sling some paint...

Should have applied the sun block Richard, the lil Dozer got burnt.

REPLY & QUOTE
Illini (Dave Shick) said
recent progress. It's getting really finicky, and most of it ends up hidden

REPLY & QUOTE
ayovtshev (Angel Yovtchev) said
With another 6 months till the end of this Campaign, I decided to start another build.

I felt like building some Bulgarian engineer vehicle, based on T-54/55.
Studied some refferencies and this is what I found:

The BLG-60(BrueckenLegeGeraet-60) was an East German tank bridgelayer, mounted on Czechoslovakian T-55 chassy.

Should you already think this is a bit complicated, wait to read the following:
Bulgarian People's Army 24th Tank Brigade received tanka bridgelayers as follows:
in 1972- MT-55(Czechoslovakian tank bridgelayer, used also by the Soviet Union);
in 1984- all available MT-55's were upgraded to BLG-60M2 in East Germany.
I found a Bulgarian Manual for BLG-67, printed in 1974(unfortunately I cannot get my hands on it right now-the seller seems to be on vacation): 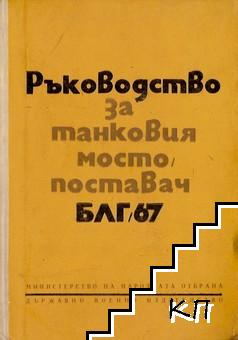 which proves the Polish tank bridgelayer was also in the inventory.

In other words- my country bought bridgelaying equipment from all possible WP suppliers...What exactly was I supposed to build?

After spending 2 days collecting information, I decided I'll build an East German made BLG-60M2 in service with the Bulgarian Army: 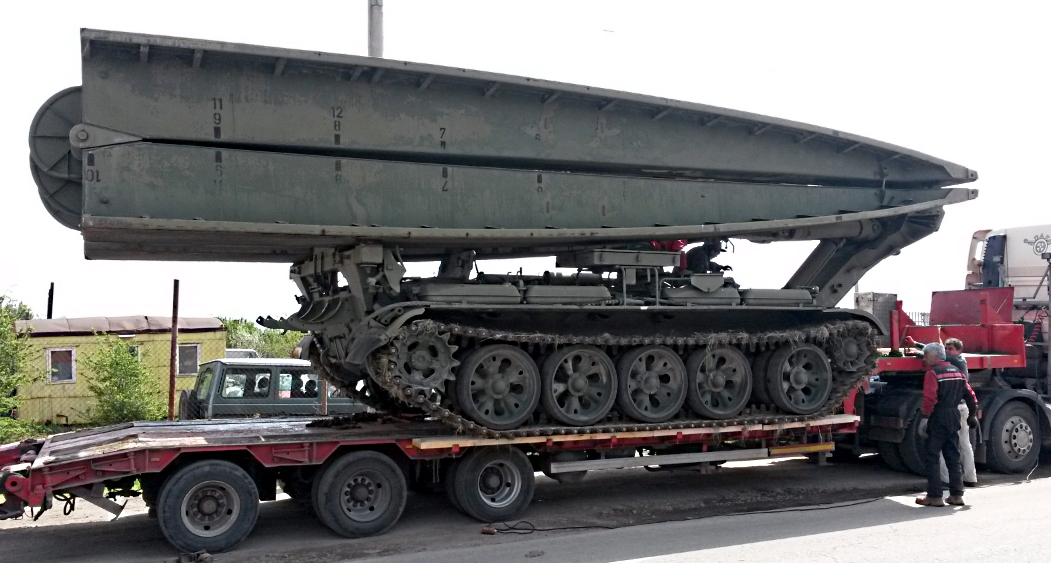 I'll use the super old Trumpeter's T-55 kit as a starting point, will install some leftover parts from the Takom's T-55AM2B, I built as a Soviet T-55AM with Kladivo FCS(another Bulgarian People's Army hybrid), and hope to make good use of some optional parts from MiniArt's T-54B interior kit.

The scissor bridge, its laying arm and some parts/components on the upper hull will be scratchbuilt.

Here is my starting picture: 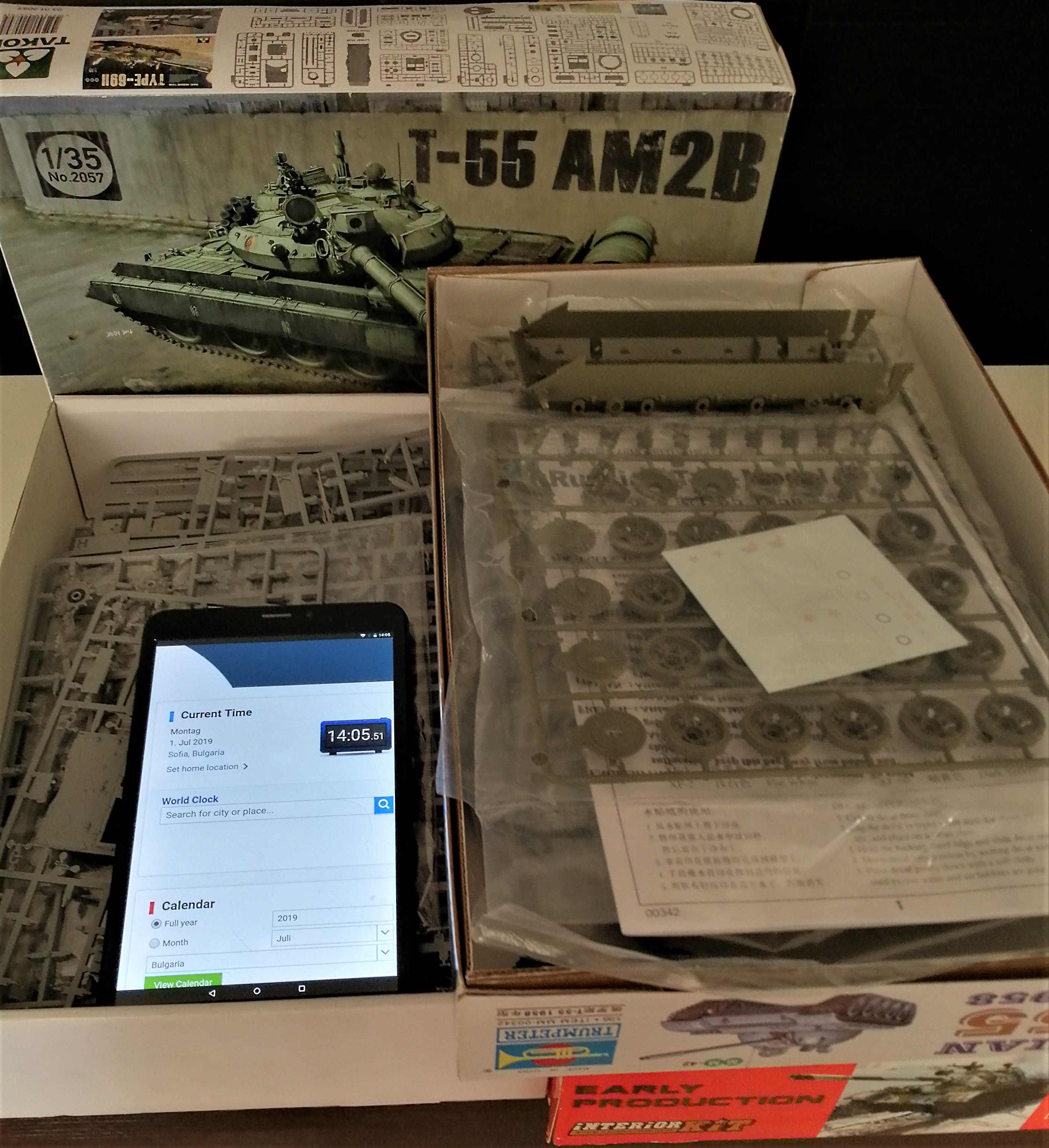 I'm sure we'll all be watching this one really closely.

REPLY & QUOTE
GulfWarrior (Richard S.) said
And for those who have been watching, yes the campaign is now extended until the end of 2019. I had to do it! Otherwise, I wouldn't have been able to complete a build in my own campaign before the deadline passed!

I'm also tossing around a couple ideas for a couple different campaigns.

Two weeks ago I had the opportunity to climb all over and photograph this: Australian Centurion Bridgelayer. The only example in the world that is fully operational. It is at Tankride at Tambourine Queensland,
http://tankride.com.au/
and yes I watched the bridge being laid... and have video.

I have the reference photos I need, but forgot to bring a tape measure so I could do plans for a scratch build project. Tim the owner will let me do that next time I visit. It won't be my build here as I am not as fast scratch building as you!

Thanks Kalin!
Will keep you posted-including some previews.

Thanks Peter!
What a piece of machinery, isn't it?
Hope my build inspires you to scratch this mighty beast one day

REPLY & QUOTE
k_mero4 (Kalin Merodiiski) said
Yes, Peter. Angel's idea is not bad. You would get a great model.
Angel, I'll take advantage of it.

REPLY & QUOTE
petbat (Peter Battle) said
I am in the process of doing rough drawings to put measurements on. It is a project I want to finish next year....

REPLY & QUOTE
ayovtshev (Angel Yovtchev) said
I have some progress to report.

I also found the Czech version PE mesh-was quite happy about it, because I was spared at least an hour of soldering in the hot weather we have here now.

So, these were the main ingredients: 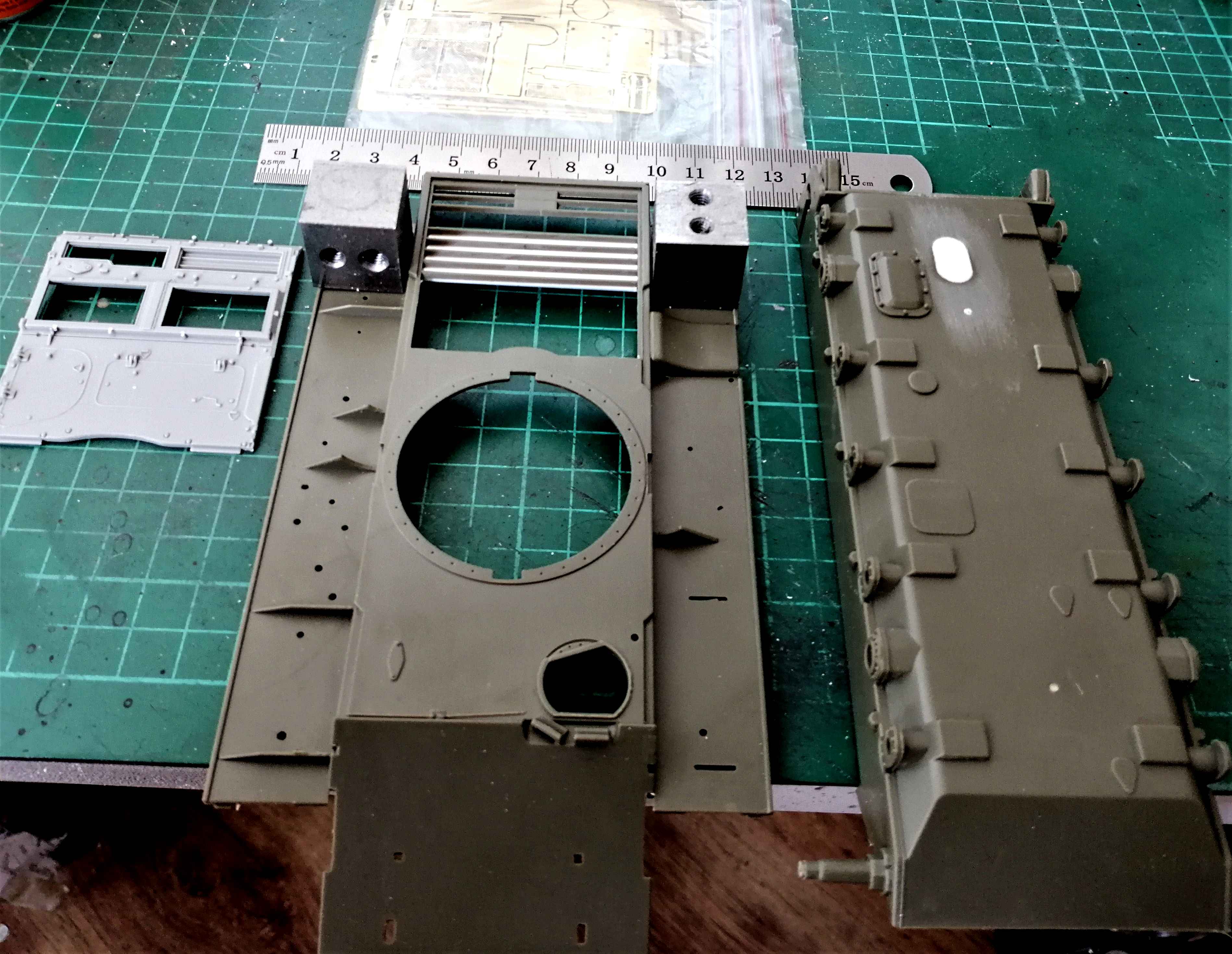 Upper hull was also reworked, some hatches and a lot of bolts were added.I'm dealing with the OPVT deep wading snorkel now: 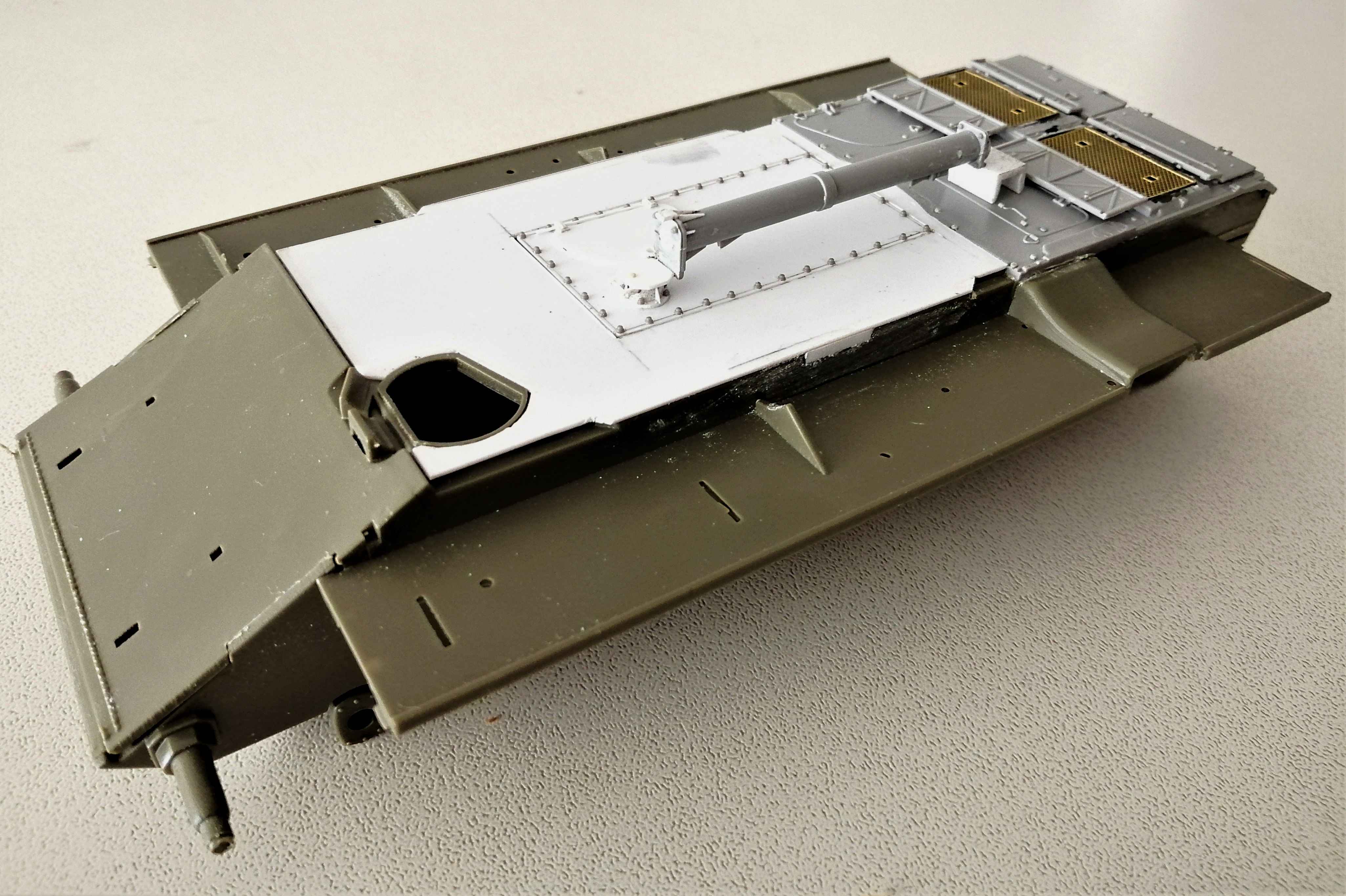 I spent some time building the commander hatch.
It has a Trumpeter base, a Takom's hatch, some scratchbuilt parts and the Tamiya anti-radiation hatch cover.

Then I worked on the fenders, replacing all supports by copper sheet cut ones.
Managed to collect all required storage boxes and fuel tanks-except 2 small boxes, that I'll build from scratch.

This is how my build looks now: 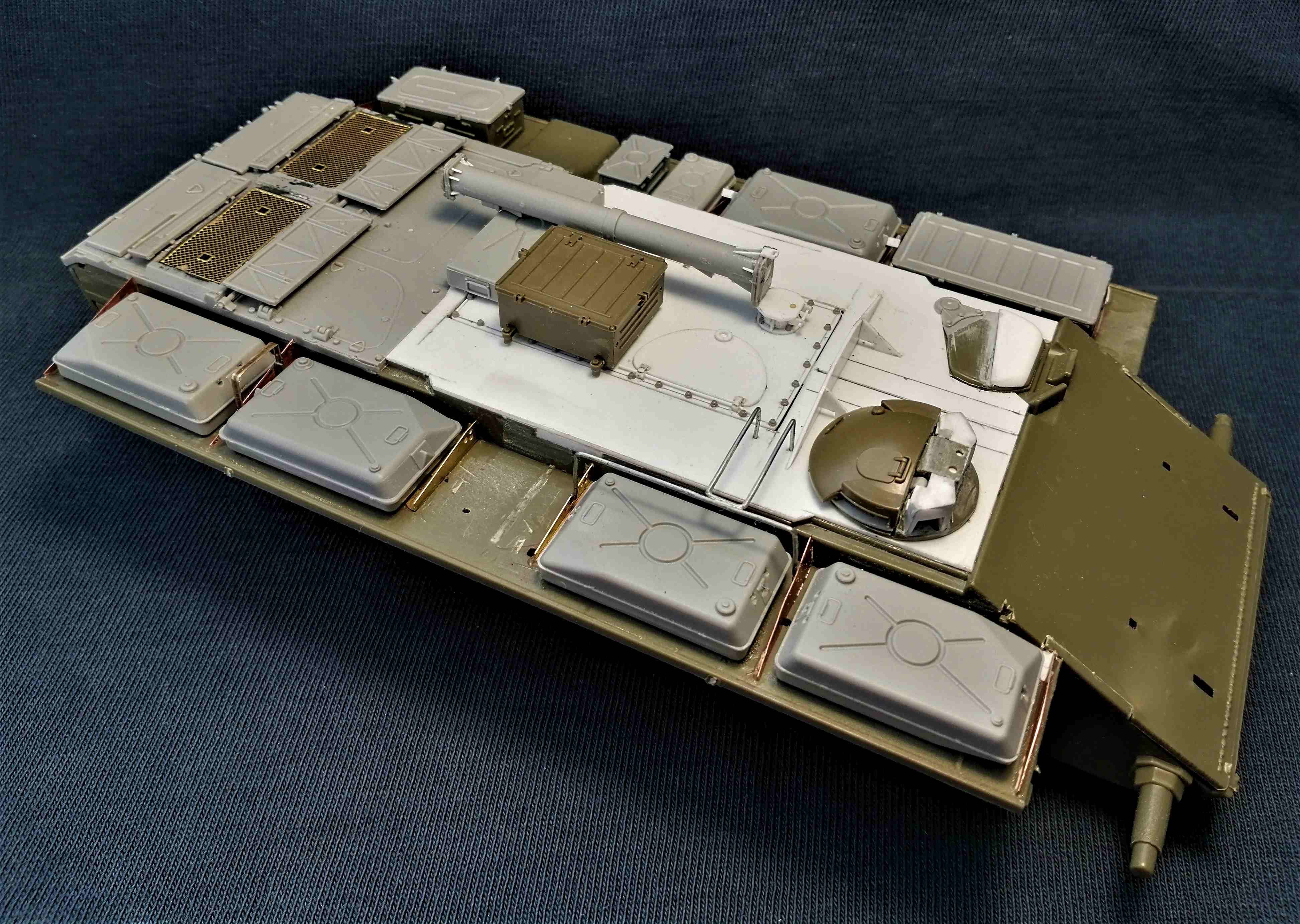 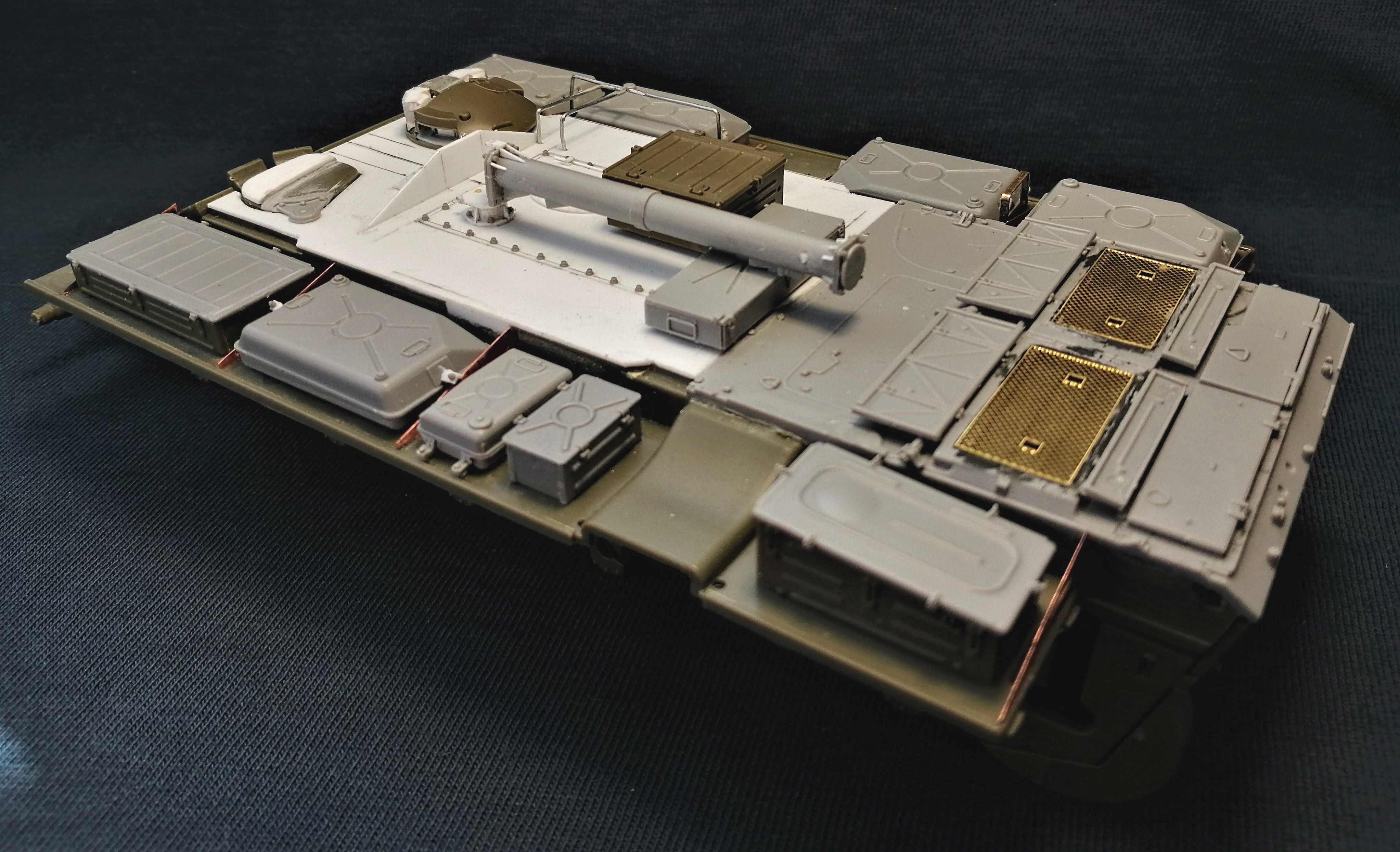 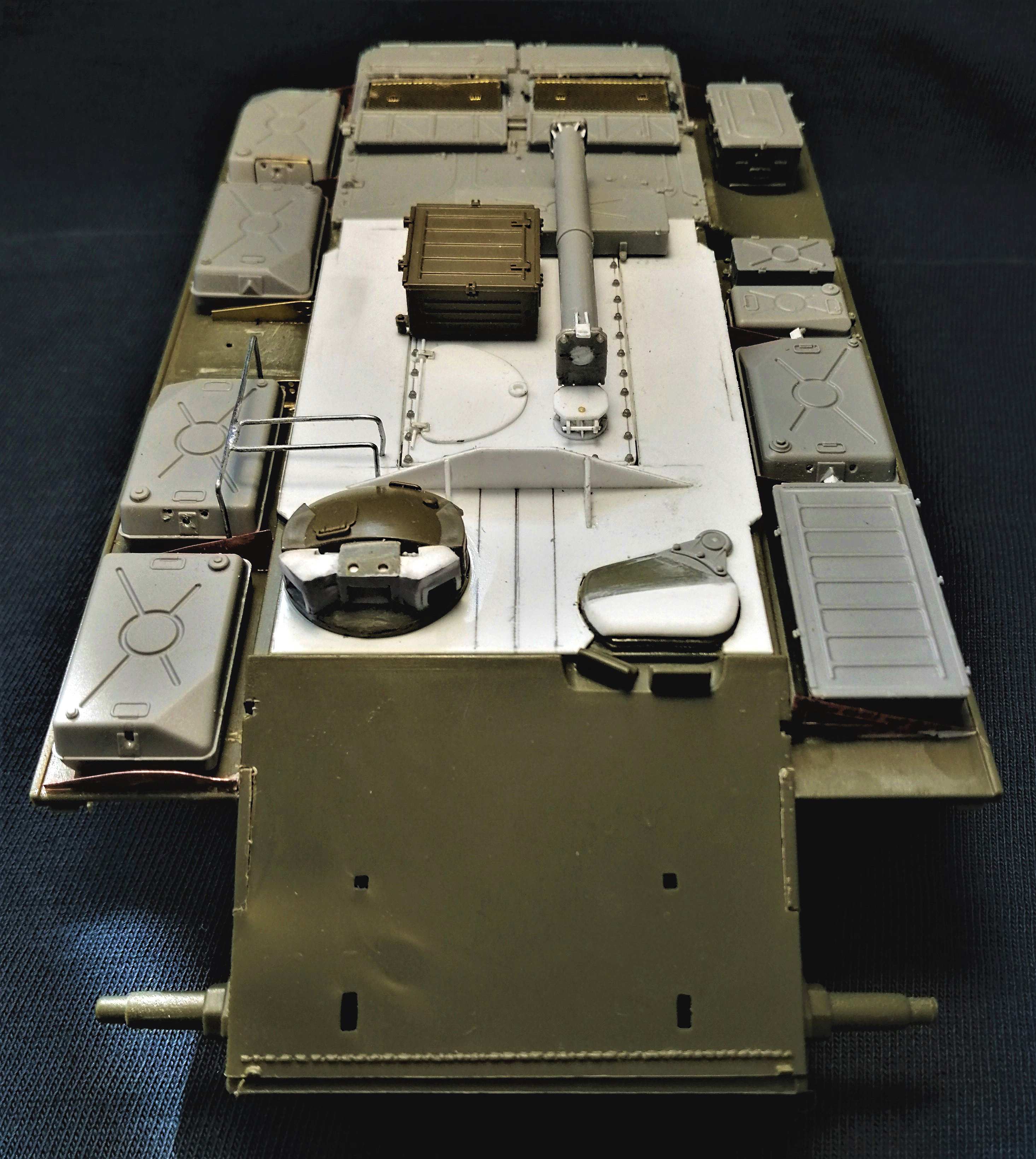 Great to have friends that let you raid their spares box hey!

Yeah, it's good to have friends (with spare boxes) you can count on!

Update on my BLG-60M2:
I have added the fuel piping with a fuel switch, a box with parking blocks, 2 boxes with accessories for OPVT(deep wading snorkel) and 2 bridge mounts for railway transport: 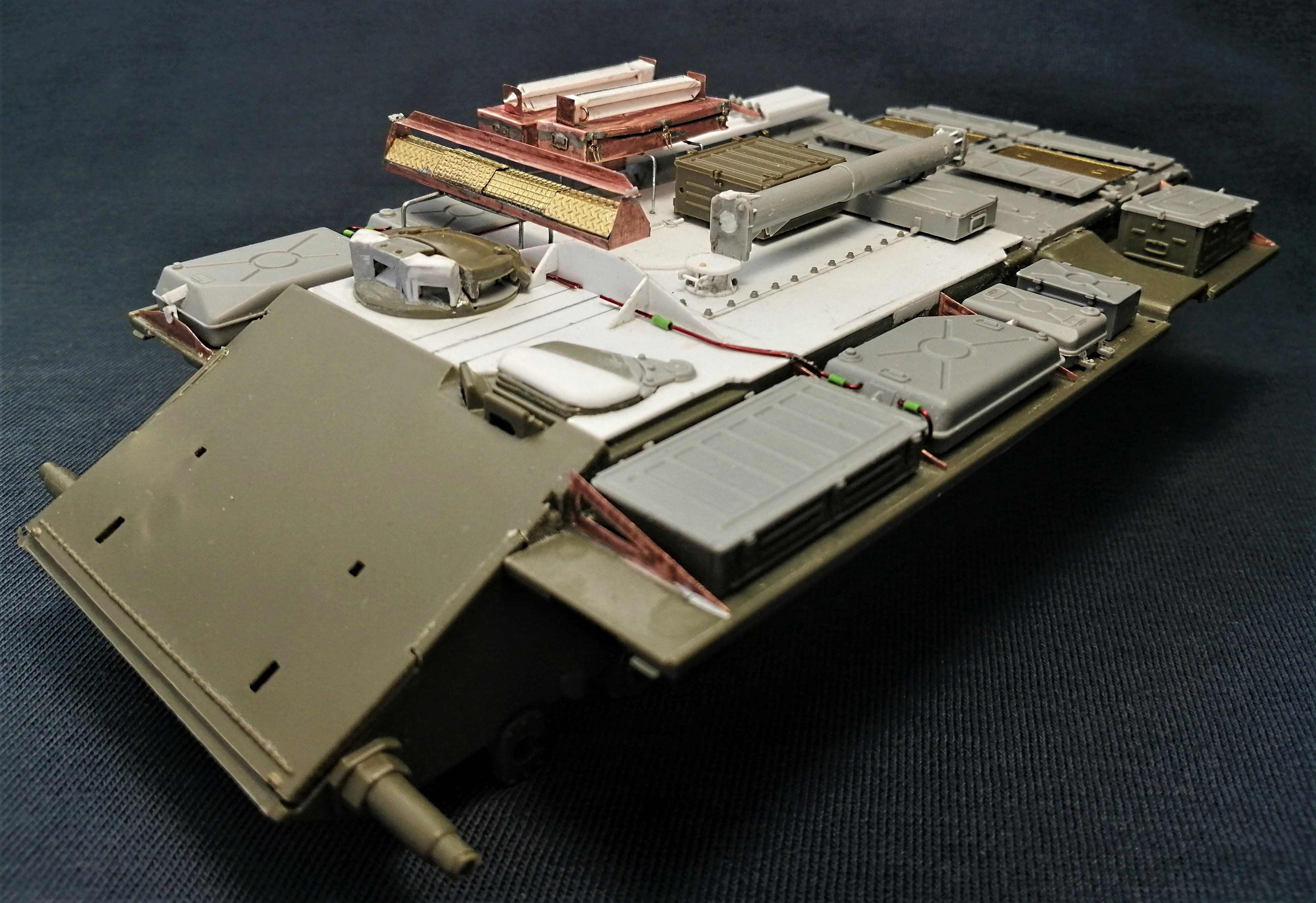 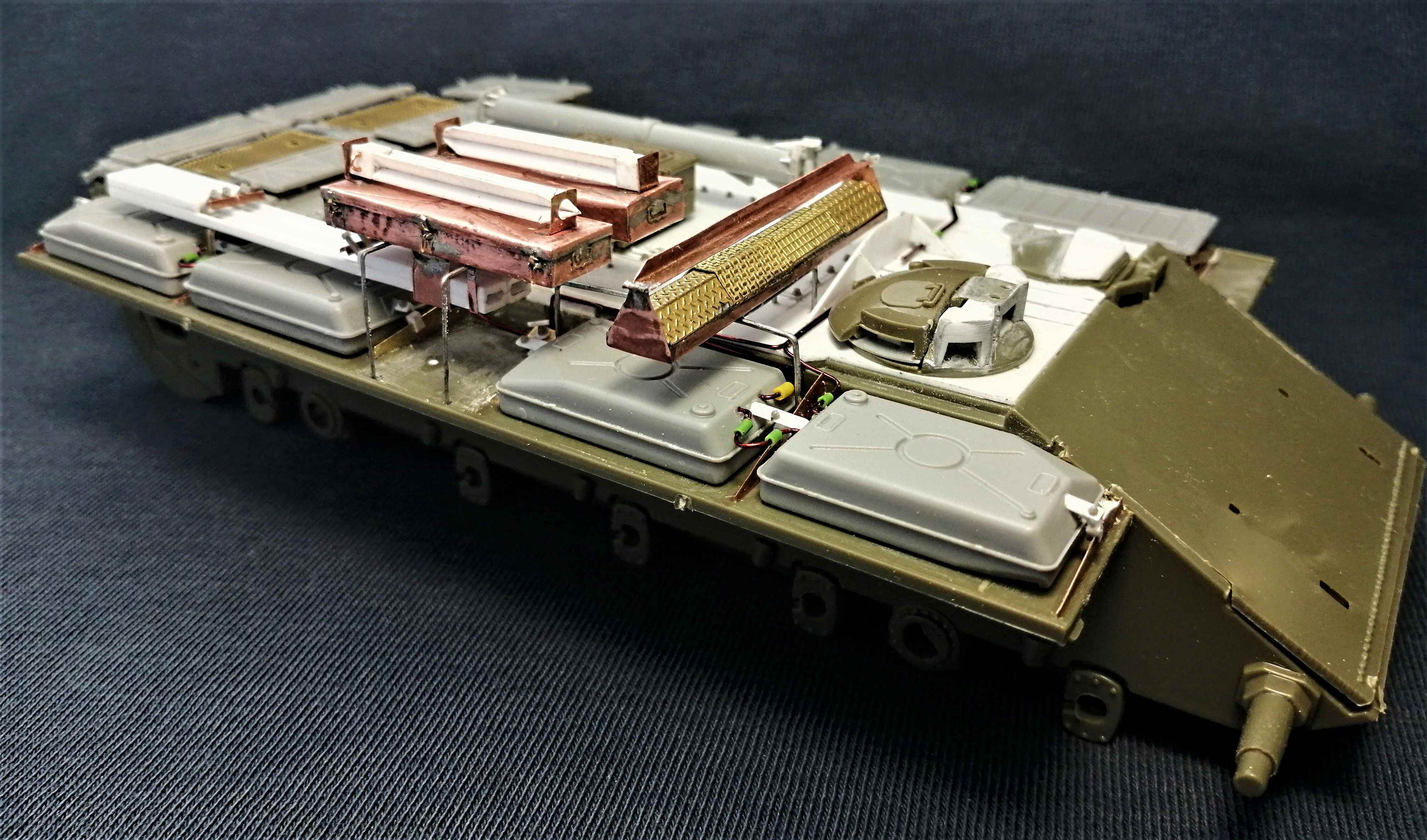 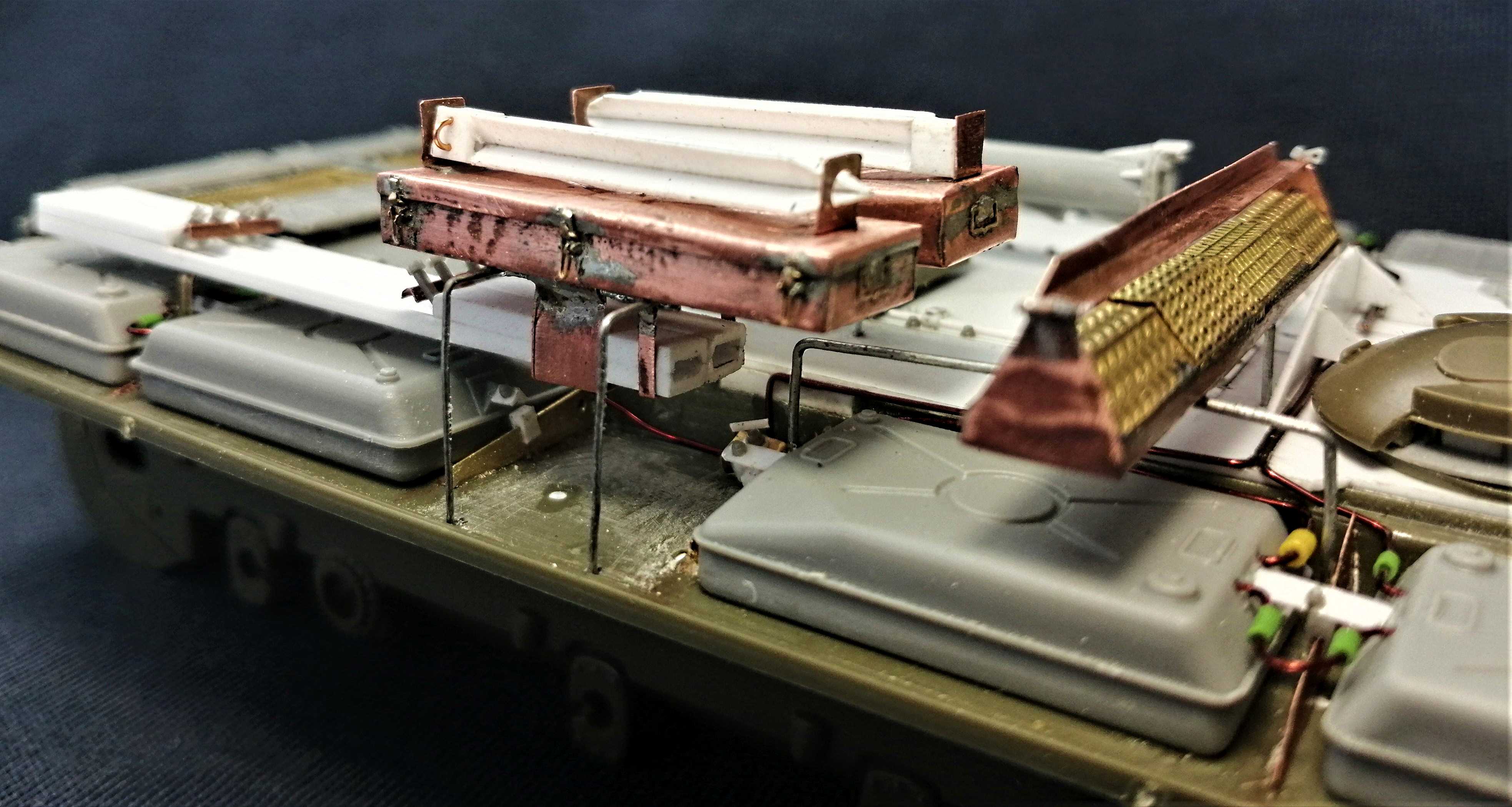 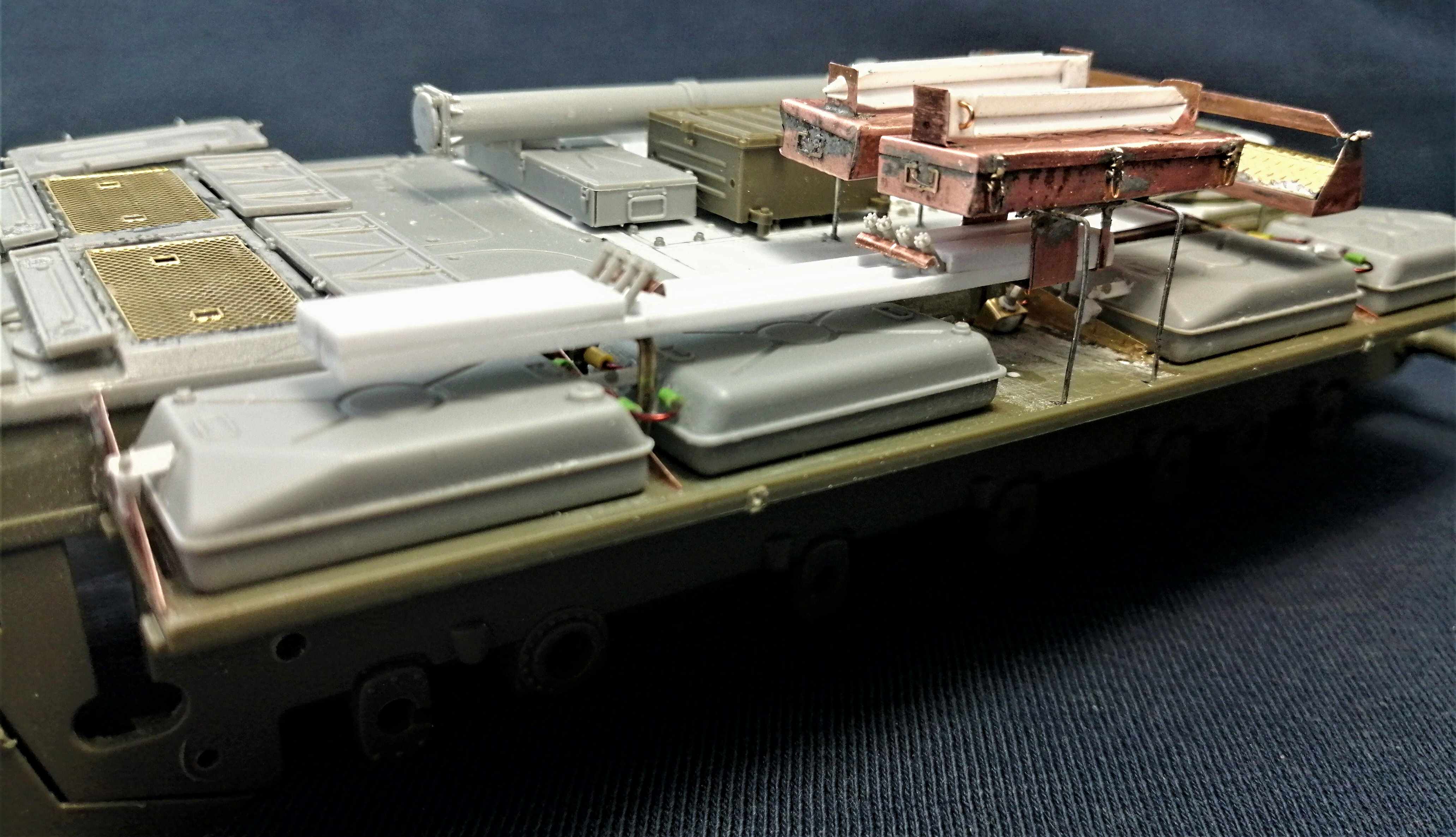 Next I need to make 2 shackles-1 for each towing rope.
Then I'll start building the rear bridge support.

Rear bridge support is ready.
I worked on the suspension-tracks, wheels, idlers e.t.c.
Used mainly MiniArt parts-besides a Trumpeter wheel hub on both idler wheels.
MiniArt wheels did not match Trumpeter axles so I had to find a way around.
I also scratchbuilt the housings of the idler wheels- what Trumpeter offers(because of the motorization of this old kit) had nothing to do with T-55 idler wheel housing.
Some pictures: 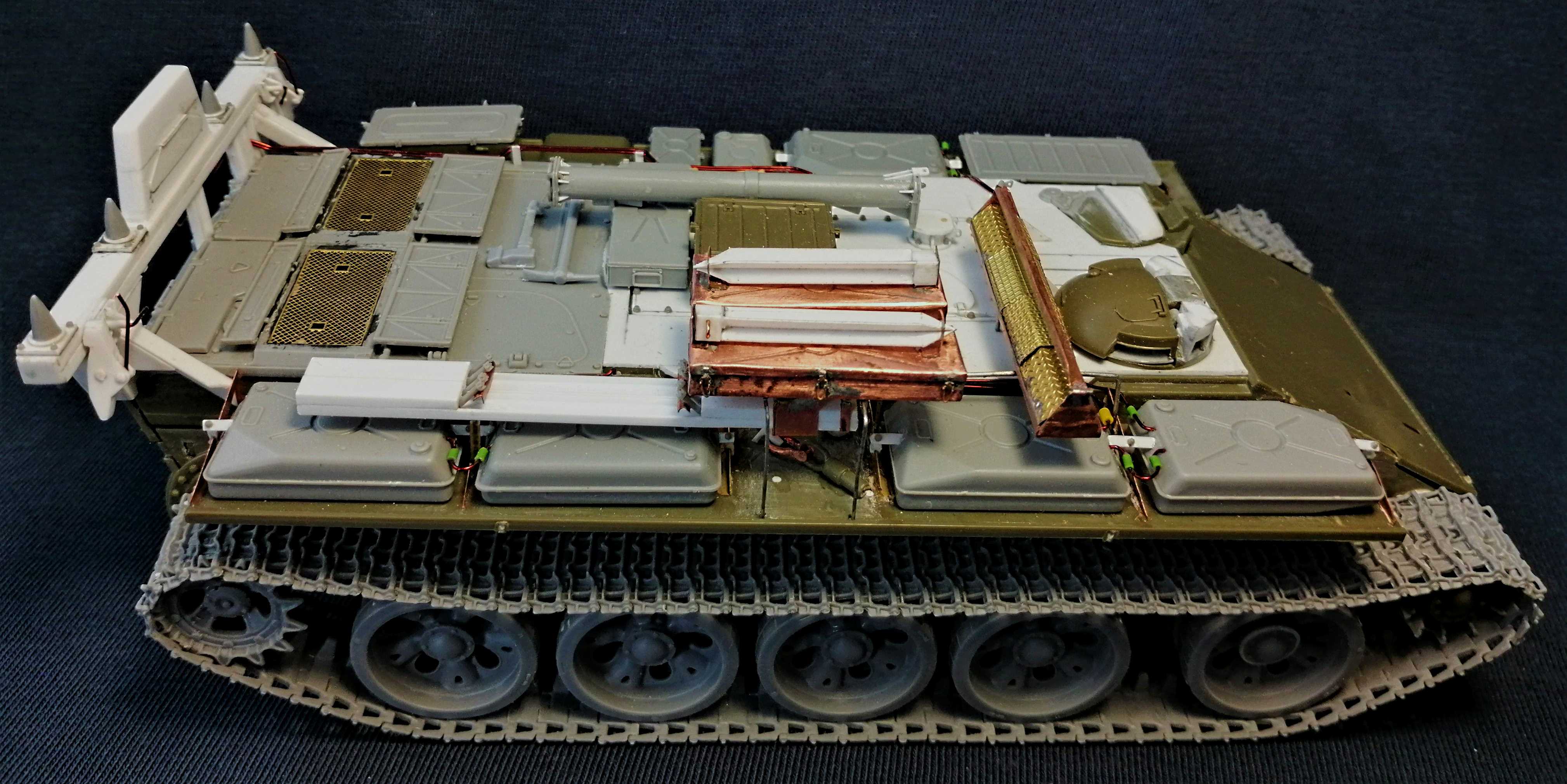 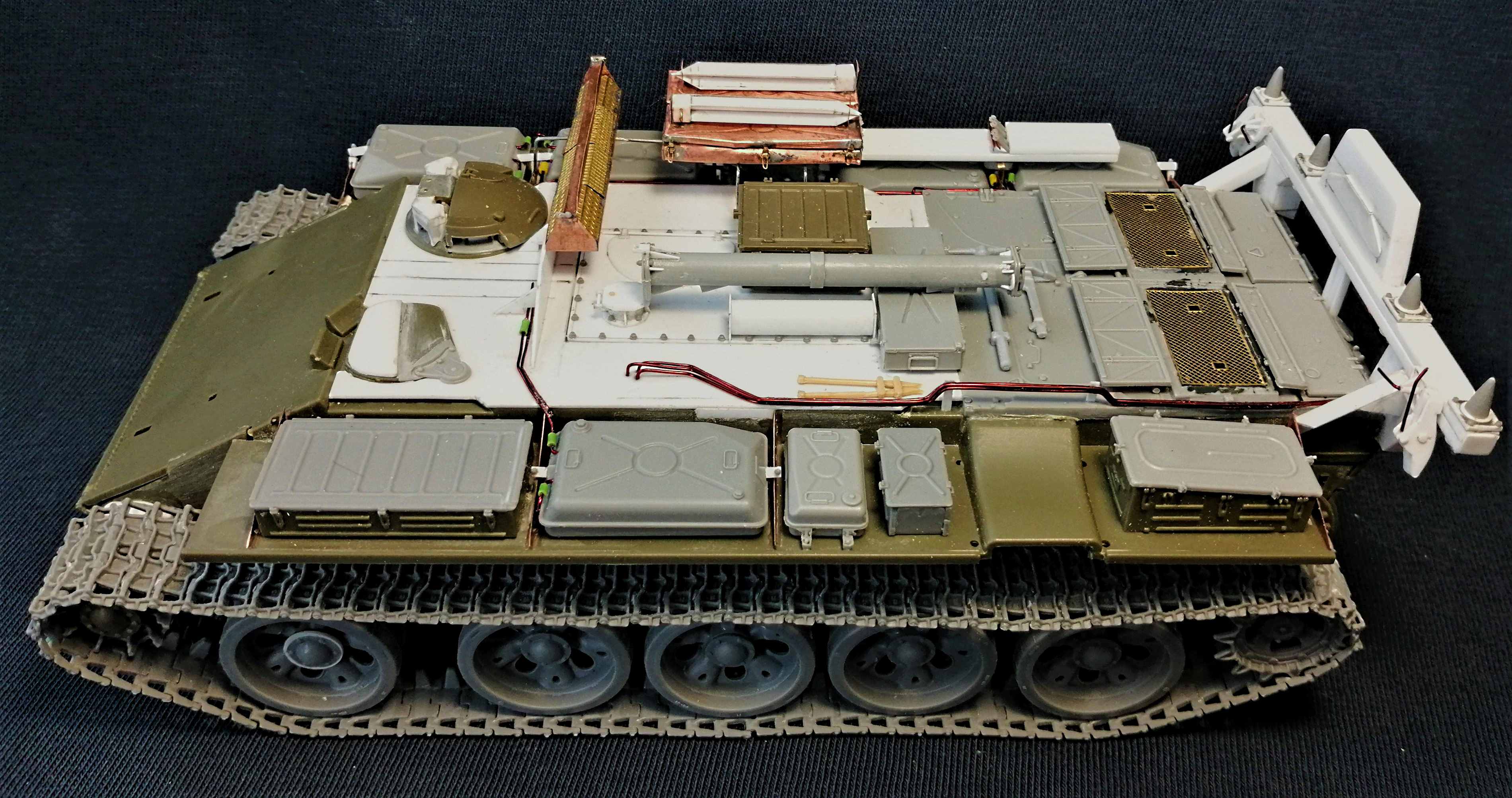 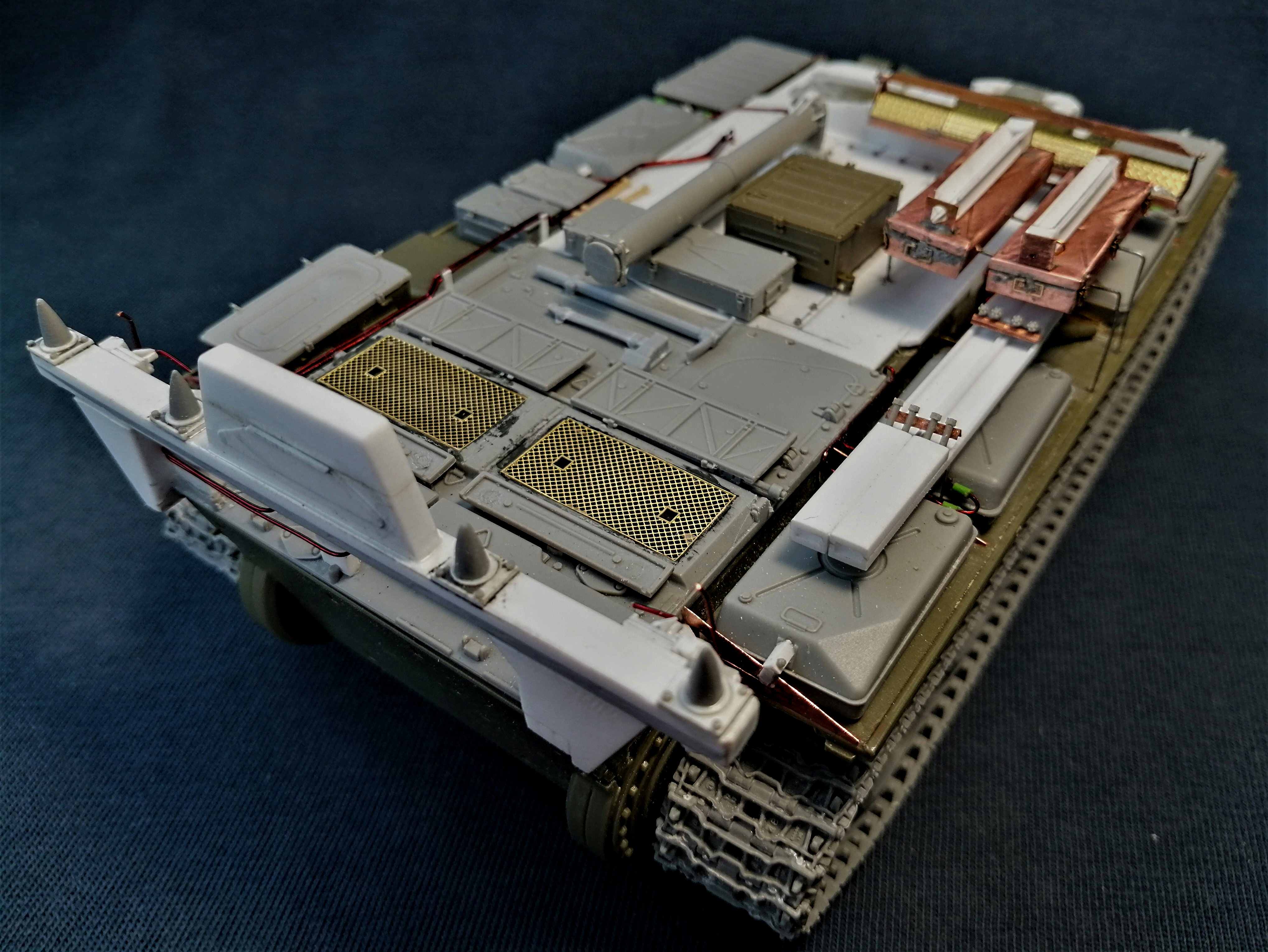 Next I'll build the bridge laying arm base,

I've been working on some of the sub-assemblies for the M9 ACE. Hopefully I'll have some pics up tonight or tomorrow.

Some more progress-anchor rope reels were installed, laying arm base was built and some minor details were added: 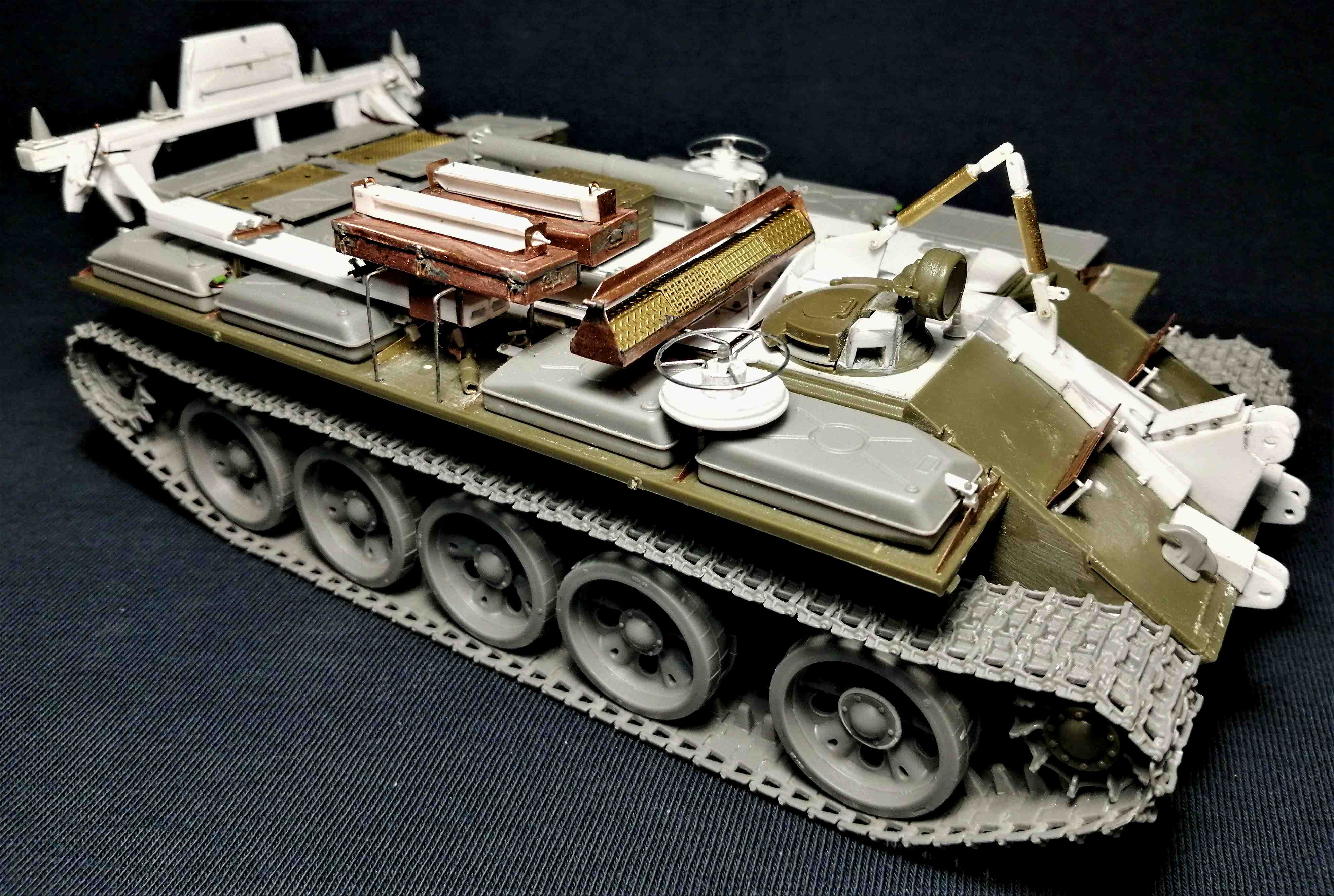 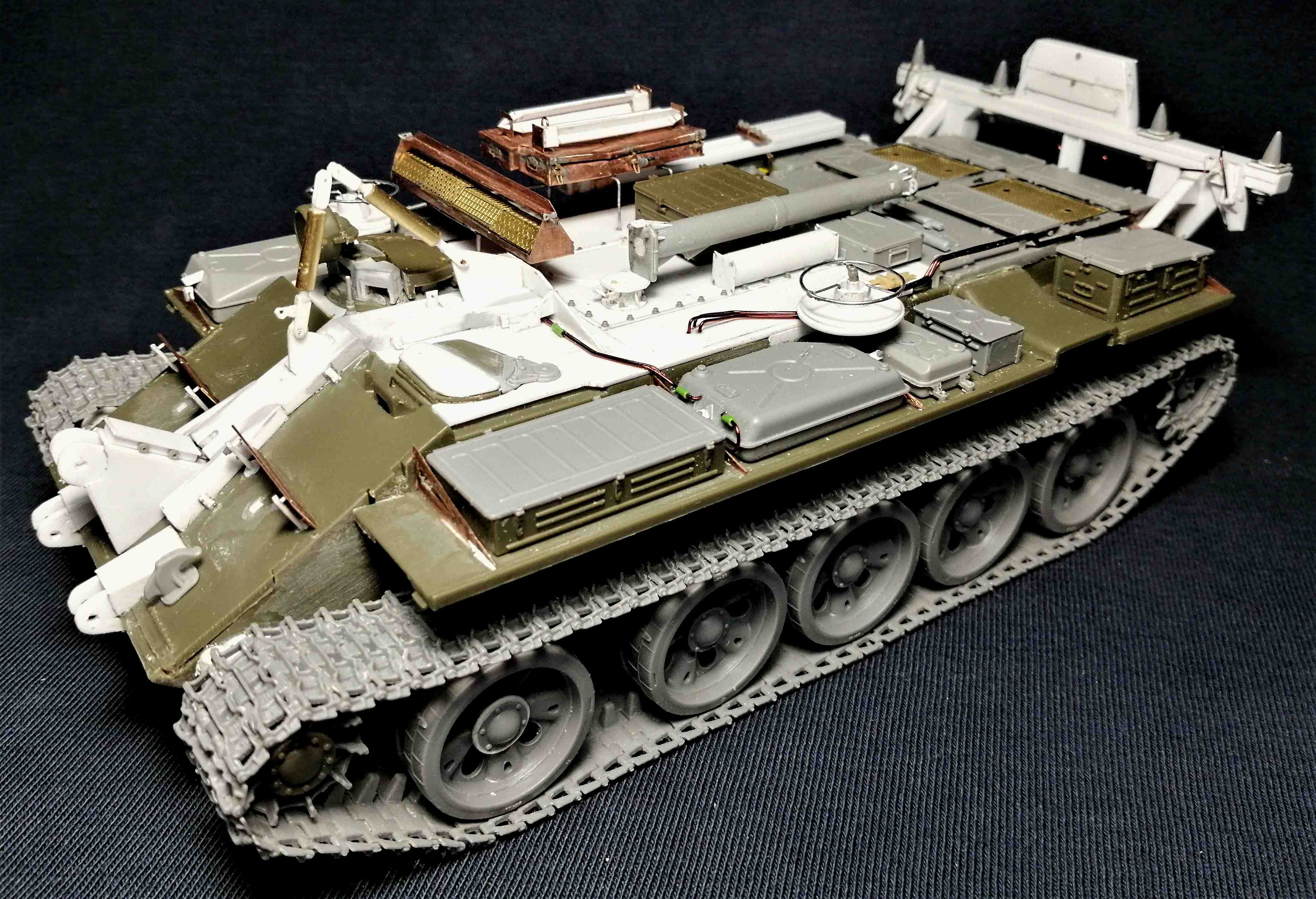 Next will be the laying arm...or the scissor bridge...
I haven't decided yet, but I must build both parts very precisely- I want the bridge of my AVLB to be deployable.