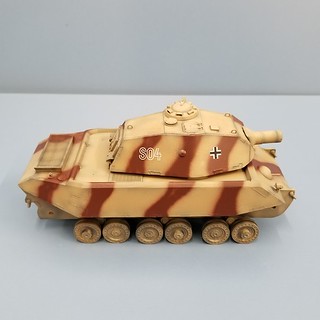 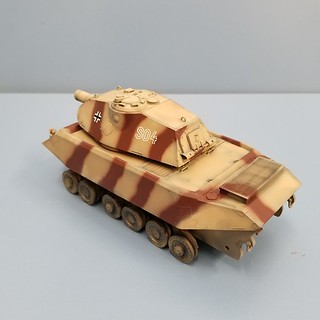 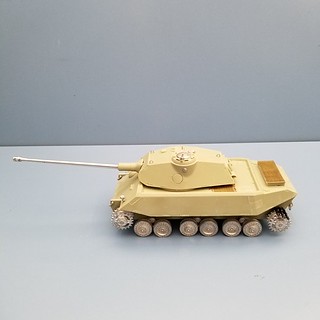 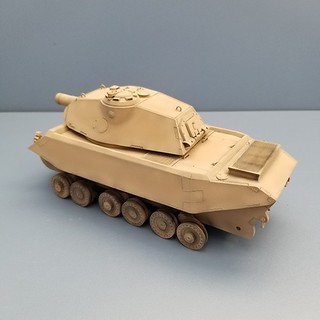 Dick, I hope things get back to normal.

eMan, welcome to the campaign. I'm sure with your building speed you can get it done.

As for 2020, I won't be running any campaigns, just participating in them. Hopefully, someone else will pick up the baton.

Whoops. Forgot to add the state of the campaign!

Various issues have kept me from my project, and now it's the holidays.

REPLY & QUOTE
Charlie-66 (Guy DeYoung) said
Calling this one done. Glad to finally get it off the bench. Hope everyone has a great Christmas and New Year! 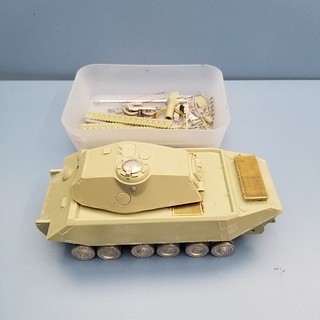 One of these two builds LOL !

REPLY & QUOTE
Mrclark7 (kelly) said
Well I have two builds I might throw into this campaign. One Abrams and one King Tiger.

I have stalled on both because of various reasons. The King Tiger I am just not sure if I want to leave in primer or three tone camo. And the Abrams I didnt have any extra to put on it until recently. So one of them if not both will get done.

REPLY & QUOTE
MLD (Mike D) said
A dozen or so additional pieces none of them intended for this kit later, 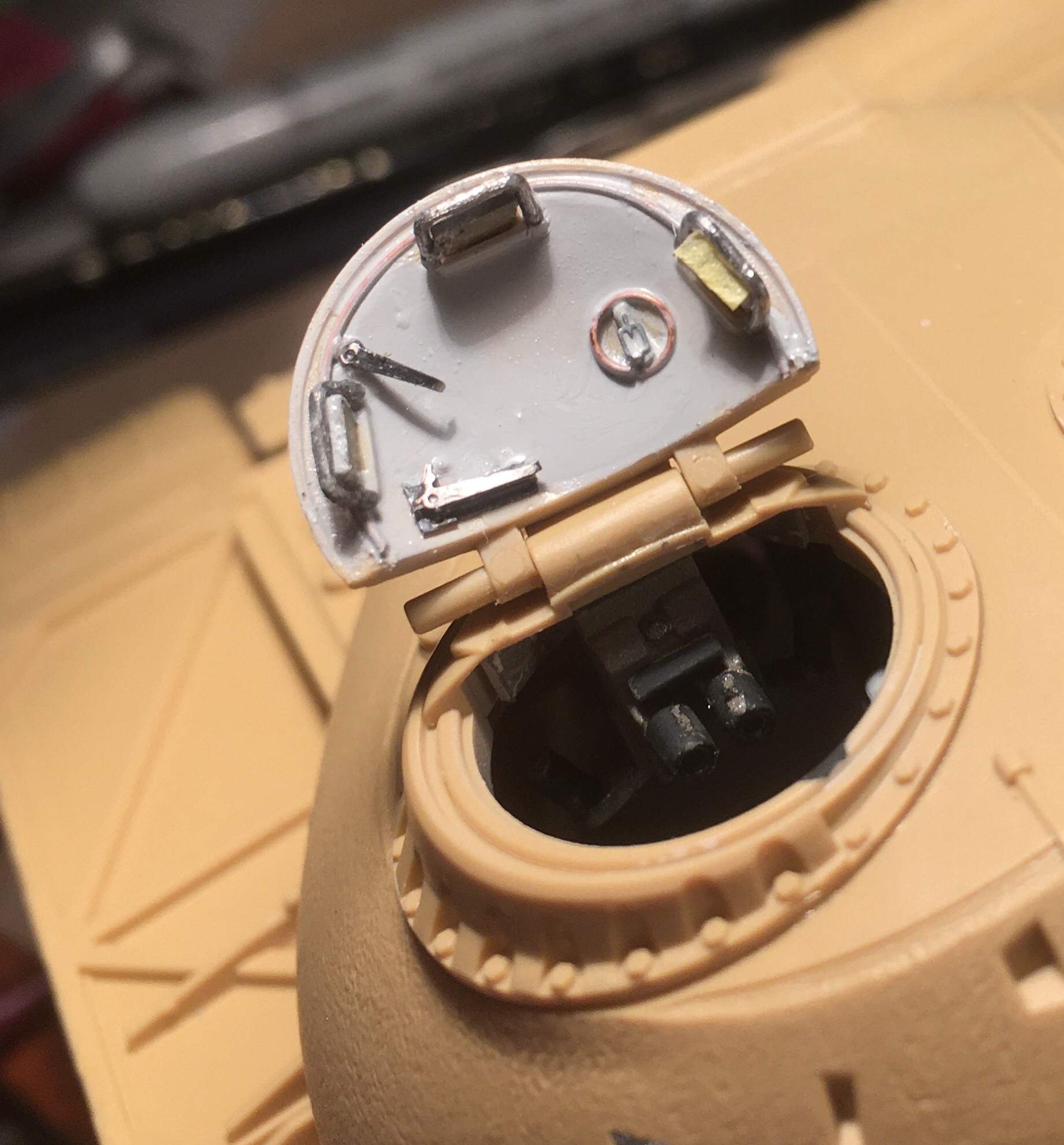 A coat of Tamiya NATO Green and some still wet oils. 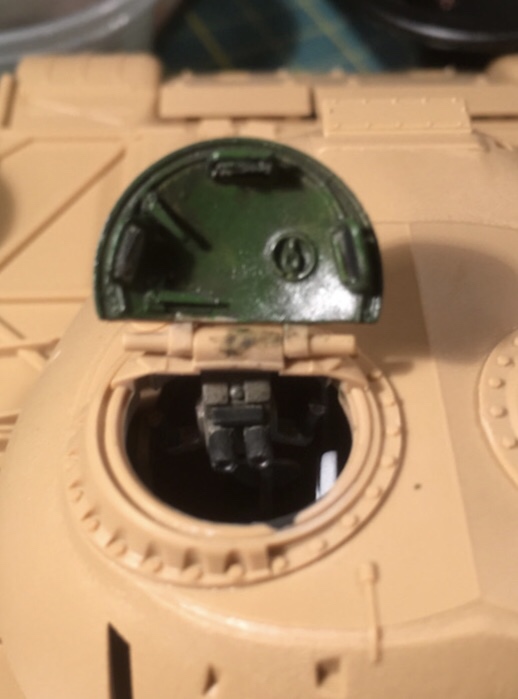 not the most 'in focus picture'

But that hatch is smaller than a quarter. 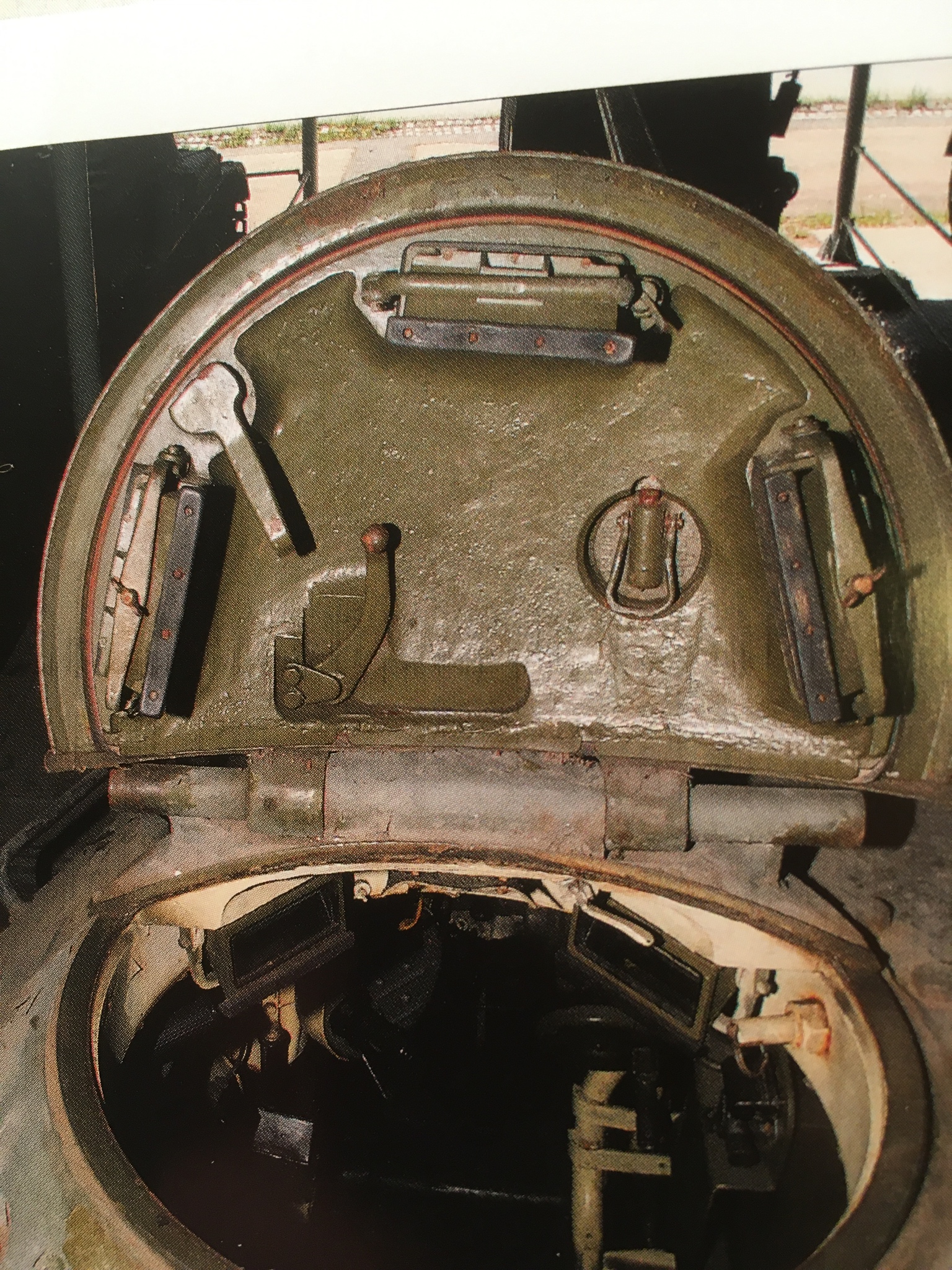 Should have built up the Mr Surfacer more around the wire ring there.. might still.

At least you're building! Keep it up.

My modeling mojo has yet to return.

Thanks for the beer.. I feel better already.

Looks like I've still got to scratch up some periscopes and take care of those e-pin marks in the commanders hatch.

Keep with it man, you'll get back to the bench. I appreciate you running this thing year after year.

Have you thought of knocking off a project in another scale or genre to get your mojo up and get back into it?
Until the fire Marshall got peeved I was hanging 4 lbs of plastic from HIS sprinkler pipes in MY classroom, I knocked out 1/72 historic and record setting aircraft for a visual timeline of powered flight when my mojo got low.

REPLY & QUOTE
GaryKato (Gary Kato) said
At least you're building! Keep it up.

My modeling mojo has yet to return.

REPLY & QUOTE
MLD (Mike D) said
Not shooting turkeys this Thanksgiving with the local club (build an entire unstarted kit start to finish from midnight Wednesday until Misnight Sunday).
I spent my time working at polishing off shelf queens and making more work for myself. Tamiya T55 Enigma ( turret halves already glued together for added degree of difficulty) plus Skif ( boo-hiss) T 55 interior bits, and because Im not enough of a masochist, 50 or so Eduard-ey bits.
From below, its not completely painted, from above its all but invisible.
I am NOT a well man. I need a beer. 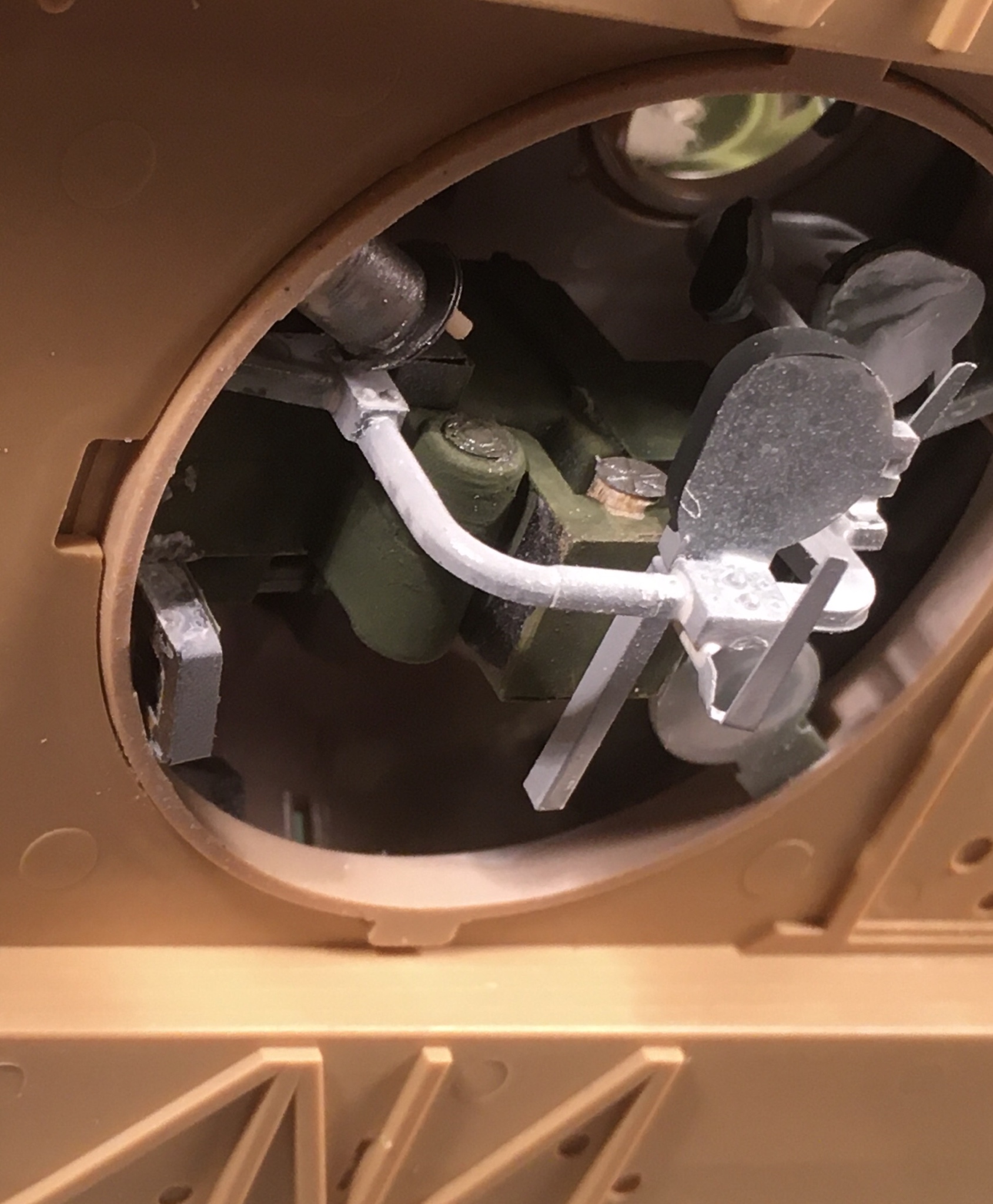 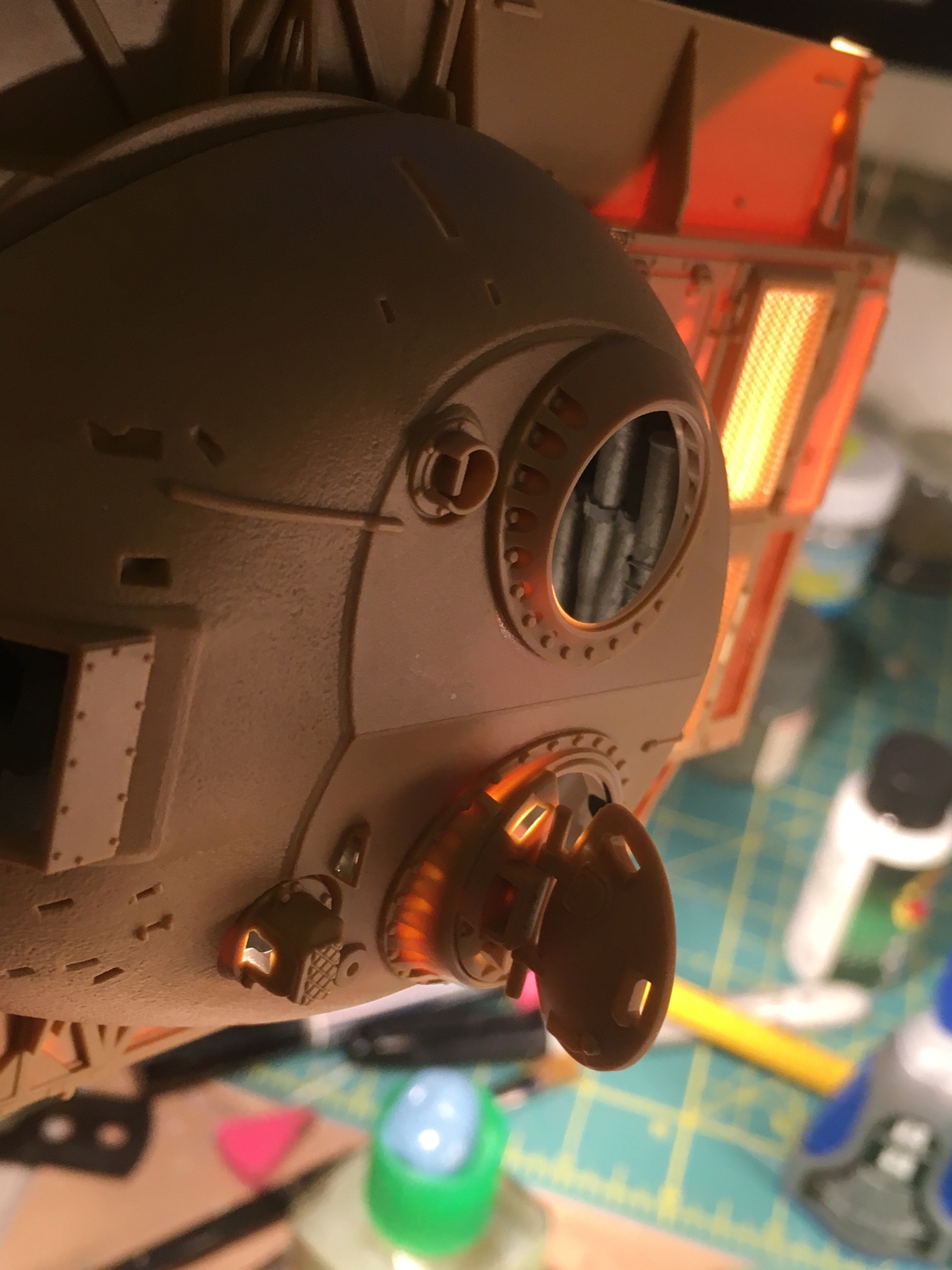 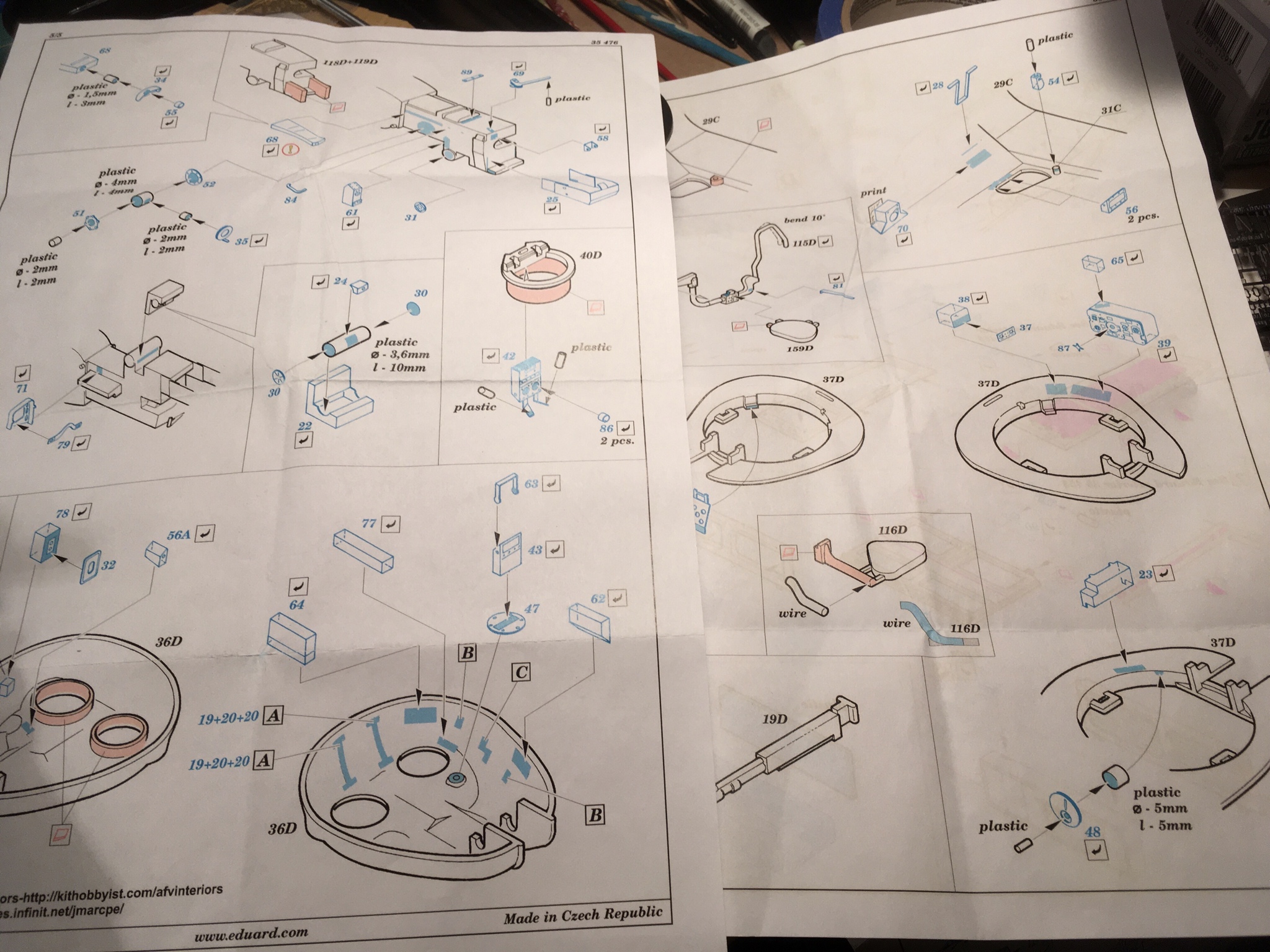 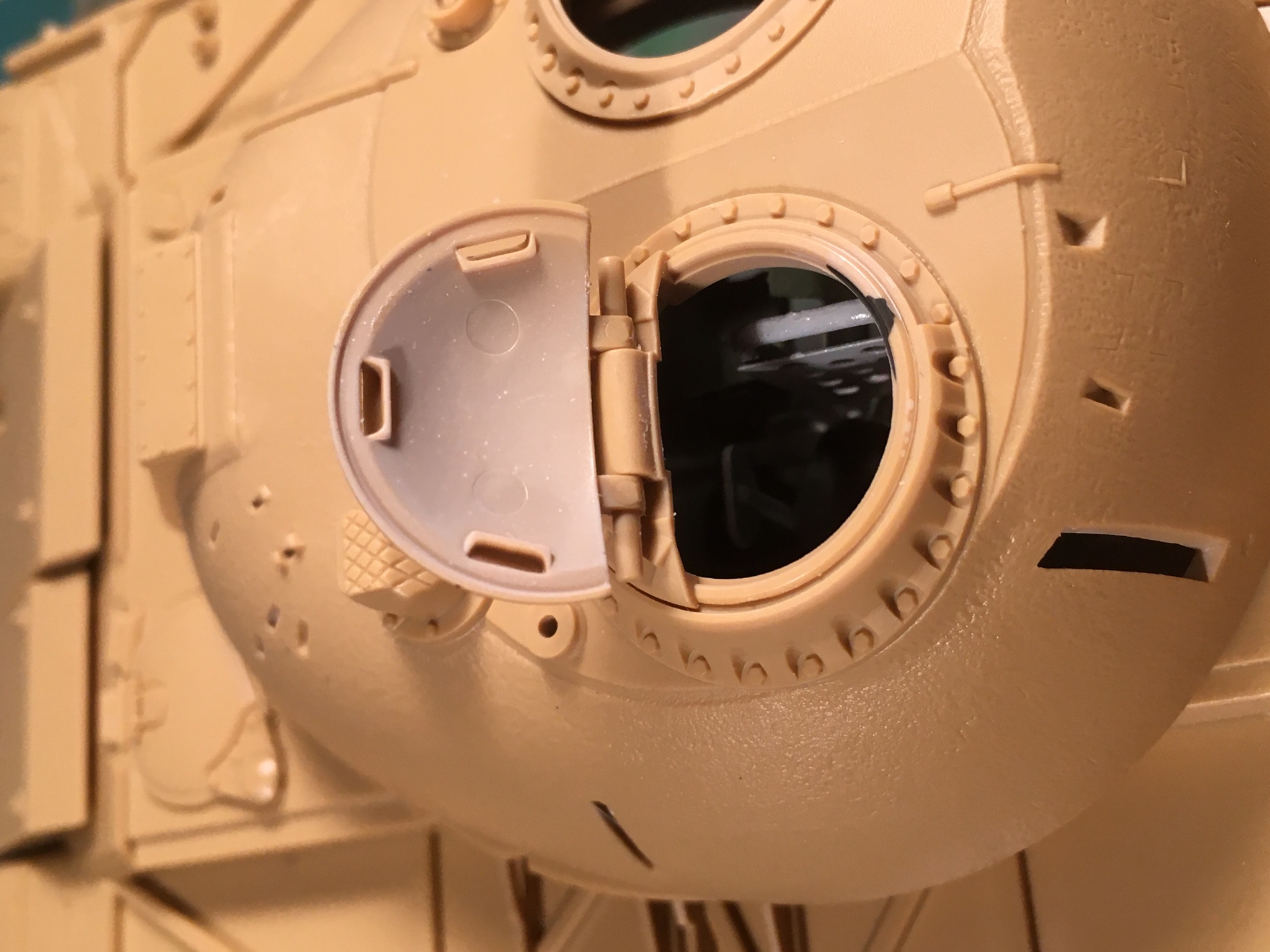 REPLY & QUOTE
ComradeMP said
So I was doing adding welds here and there on the hull, so I thought I should start working on the turret while the epoxy hardened. Good thing Dragon kits usually end up with a bunch of unused parts. Grabbed a spare copula and trimmed it down a bit, but it still overhung on the side. I decided to cut a piece out of it and bend it in on itself a bit. Then I used Testor's liquid cement (I love this stuff for when I need a strong bond) and glued it down. New copula fit perfectly on the top of the turret and I filled it with more epoxy to keep its shape and give me a platform to place the new hatch. 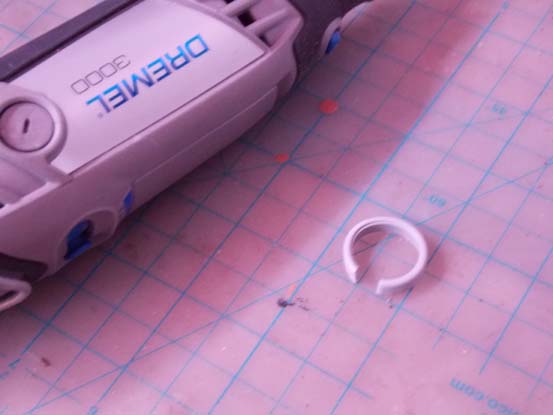 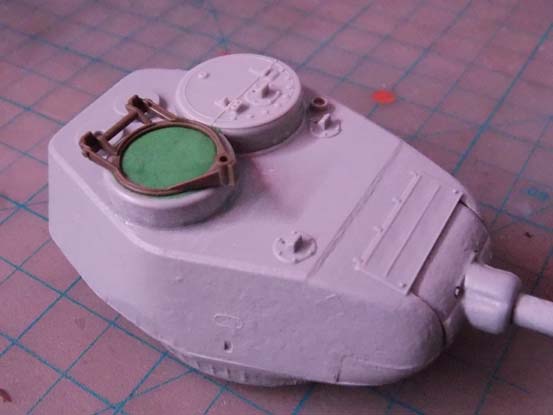 The new hatch with the AA mount came about my work on my OT-55 project which I had misplaced the hatches and ended up buying some Resin replacements. While looking for a spare Dshk, I came across the lost hatches. 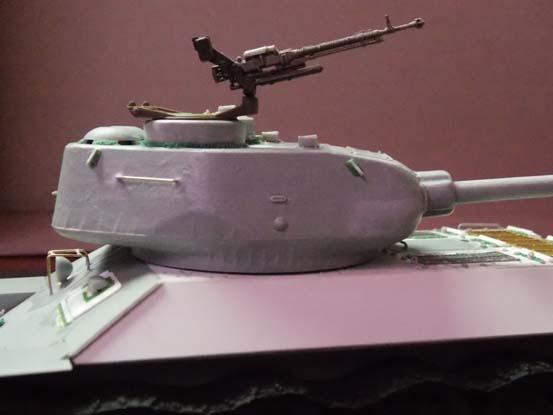 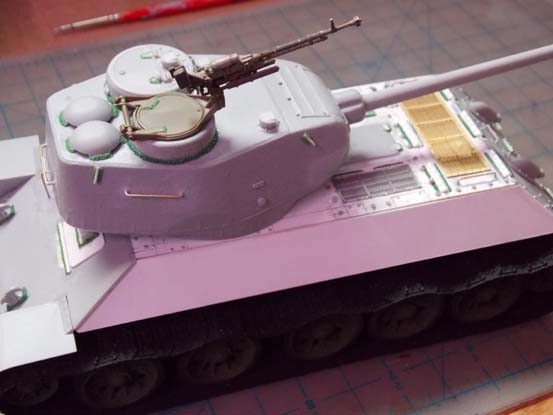 I also glued the front fenders on, I would have liked to have used the later style ones, but these were the only ones I had spares of. 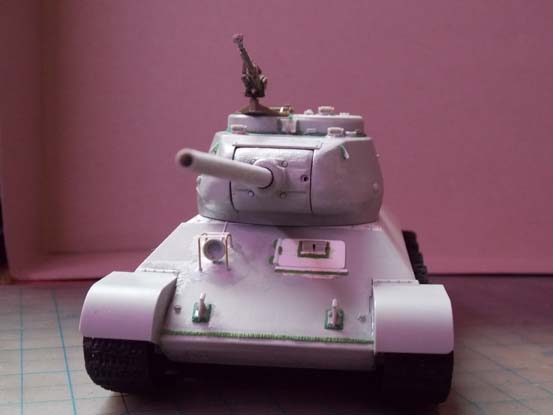 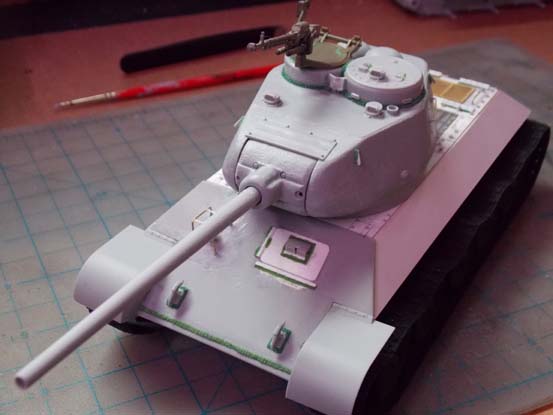 The hull is almost done, need to add some more "armor" to the sides along with the fenders and rear mud guards and all the tid bits including the fuel drums.

Sweet! Thanks for giving us another tip for the toolbox.
Take care,
Don "Lakota"

Feels good that I've been able to put in a lot of bench time on my vacation. I'll leave an update, as I'm making my way to a day at Disneyland.

Pre assembled and painted wheels/tracks. I'm holding off on the suspension arms until I'm almost done. 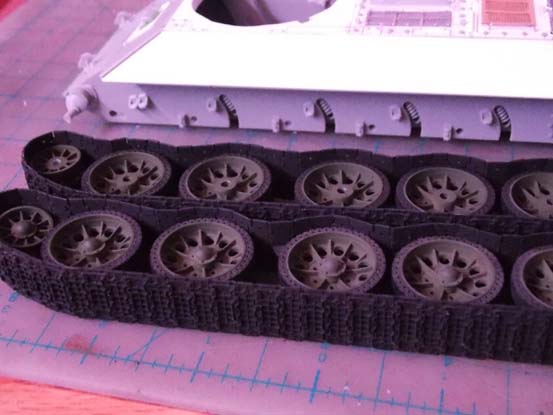 Front is mostly done now, also had some time to start some of the welds. Driver's vision blocks made out of spares and kit parts. 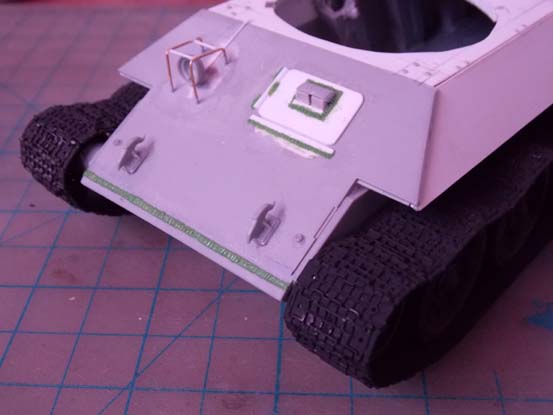 New rear plate hinge, sort of like what I saw on updated Type 58's. 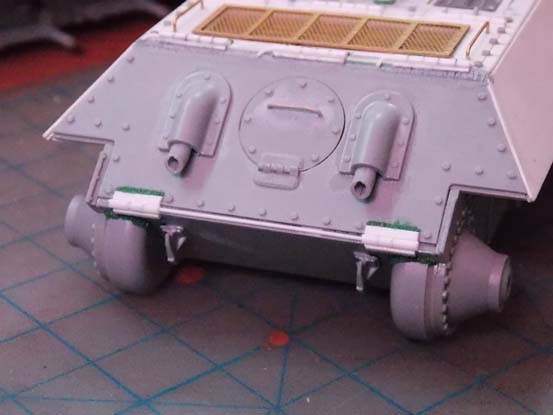 Sweet! Thanks for giving us another tip for the toolbox.
Take care,
Don "Lakota"

REPLY & QUOTE
GaryKato (Gary Kato) said
How long does it take to place all those rivets in-line? 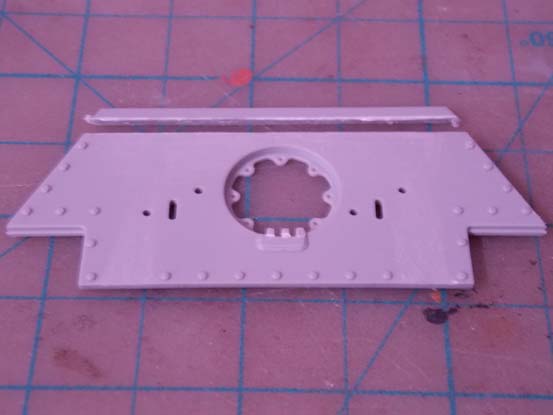 Top of the hull is as good as done. 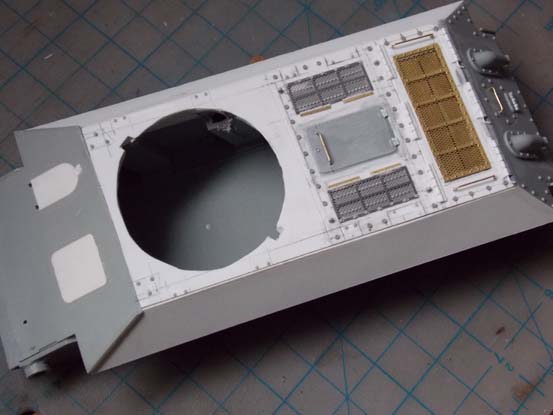 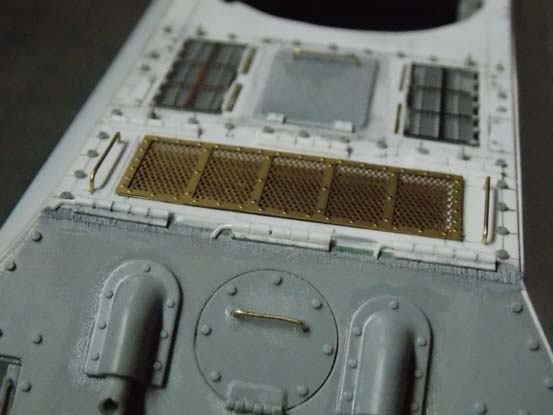 I'll probably moving on to finishing off the rear plate, before I start working on the front plate starting with the new driver's hatch/vision blocks.

Doug, you are most welcome to join our campaign. Is you kit Academy or Tamiya?

Hey! Academy. The photo below shows it next to an in-progress Tamiya M3, also started many years ago.

REPLY & QUOTE
GaryKato (Gary Kato) said
That's quite a project you have there. I have trouble just building out of the box kits!

REPLY & QUOTE
ComradeMP said
Figured I'd finish something that's been sitting on the shelf for once.

Started back years ago with an attempt at an SU-85.

Someone pointed out that it wouldn't be right, I put it aside for a long while.

Then I had been kicking around an idea for building the T-34-1 from World of Tanks. Which was a proposed series of designs for a tank to be built in China instead of relying on the Soviet Union. While also trying to eliminate some of the short comings of the T-34/85, and also lowering it's size and weight.

Decided to recycle the SU-85 attempt, and stripped it down. I was going to enter my T-34-1 for the Scratch builders campaign, but I never got that much done. I rebuilt the top of the hull and then it sat again for months collecting dust. 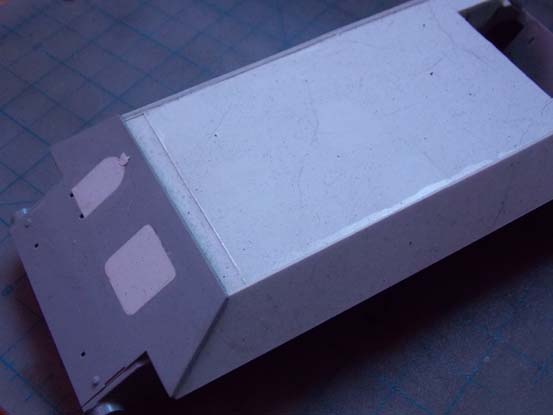 I recently picked it back up and started work on it again. There was one layer left for the top of the hull, it's where I drew all the hatch locations and such. Did a bunch of cutting and some scribing. I decided to go with something different for the vents, and this is where I'm at now. 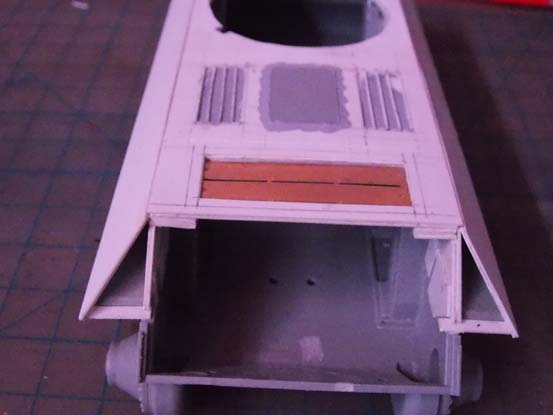 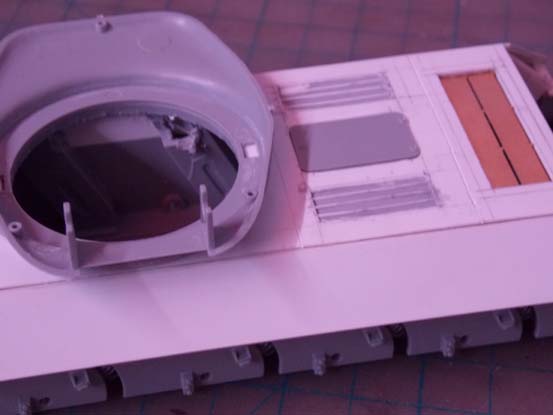 Spare T-34/85 lower turret fitted. Still not completely sure how close to the WoT model I want to stick too, or just go my own way. I was thinking of adding some of the changes the Chinese did to their Type 58's like the second copula with a dshk.

REPLY & QUOTE
GaryKato (Gary Kato) said
Doug, you are most welcome to join our campaign. Is you kit Academy or Tamiya?