REPLY & QUOTE
Quincannon (Chuck Treese) said
Thanks Thomas: My local hobby shop does not carry Lifecolor, so I will first look on line to see if I can find it at one of the usual suspect mail order shops we have here in the States. Barring that I will go with the mixture of Vallejo. The three Trumpeter Italian BB's in 1/700 hold some interest for me. I have never built anything from the Italian Navy, but suspect one may find its way to my bench, much sooner than later. Working on a Bismarck at present using the AK Interactive DKM paint set. Especially like AK's DKM hull red.

Thomas: Trumpeter most often includes Vallejo brand paint in their color charts. Would you mind giving me the Vallejo paint that they recommend for the anti-fouling green on Zara, if any, I know Tamiya makes a green that is suitable, but I much prefer Vallejo in most cases. Thanks. C

Chuck, no problem: For the antifouling green they recommend a mix of 90% Vallejo 969 and 10% Vallejo 897 RLM70 black green. I made myself life easier and will use LIFECOLOR´s UA 617 Regia Marina Italiana Verde Scuro Antivegatativo acrylic color which looks spot on for my taste. If needed I can make a picture of this color at a paper sheet for a better impression for yourself?!

REPLY & QUOTE
Quincannon (Chuck Treese) said
Thomas: Trumpeter most often includes Vallejo brand paint in their color charts. Would you mind giving me the Vallejo paint that they recommend for the anti-fouling green on Zara, if any, I know Tamiya makes a green that is suitable, but I much prefer Vallejo in most cases. Thanks. C

REPLY & QUOTE
Best health to everyone!
Stay home and build models!
1/72 in the Hangar:
P51D, ME109E4 & FMk22 Spit for the Big 3 Campaign
and a Schwalbe for the Schwalbe Campaign!

Nice progress, the work on the hull will make for a nice clean look when painted.

I am surprised that the deck is so short (for a Trumpeter kit)at the stern. This is new tool kit from 2017! Was interested in purchasing this kit but now I am going to hold off until I see how the rest of your build goes.

taking notes for when I get round to my build.

REPLY & QUOTE
Black_sheep (Thomas Wirsching) said
Andiamo! All needed equipment is aboard - now I can start my next build. As I wanted to depict a full hull ship on a socket I needed to drill two holes inside the hull bottom 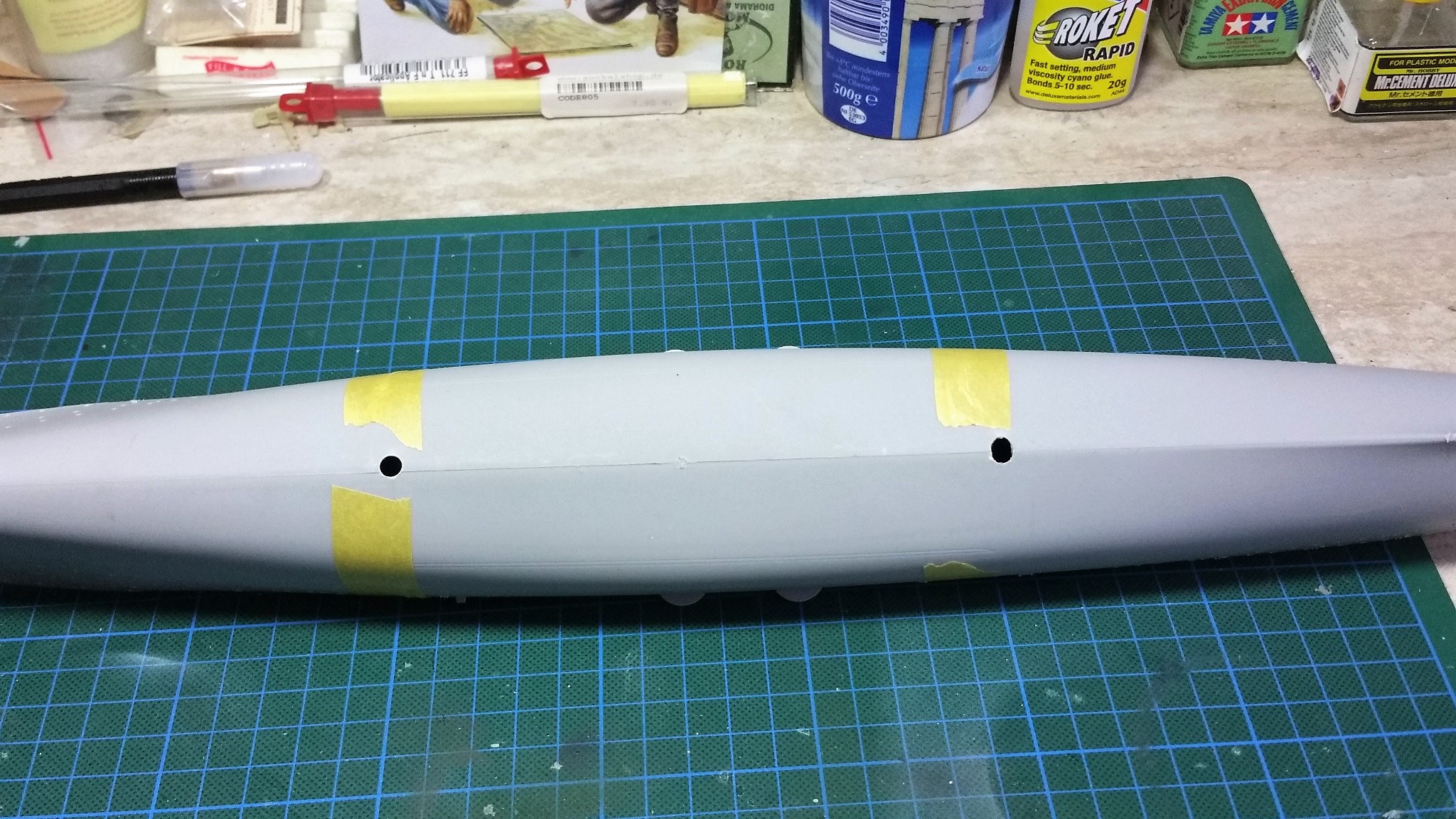 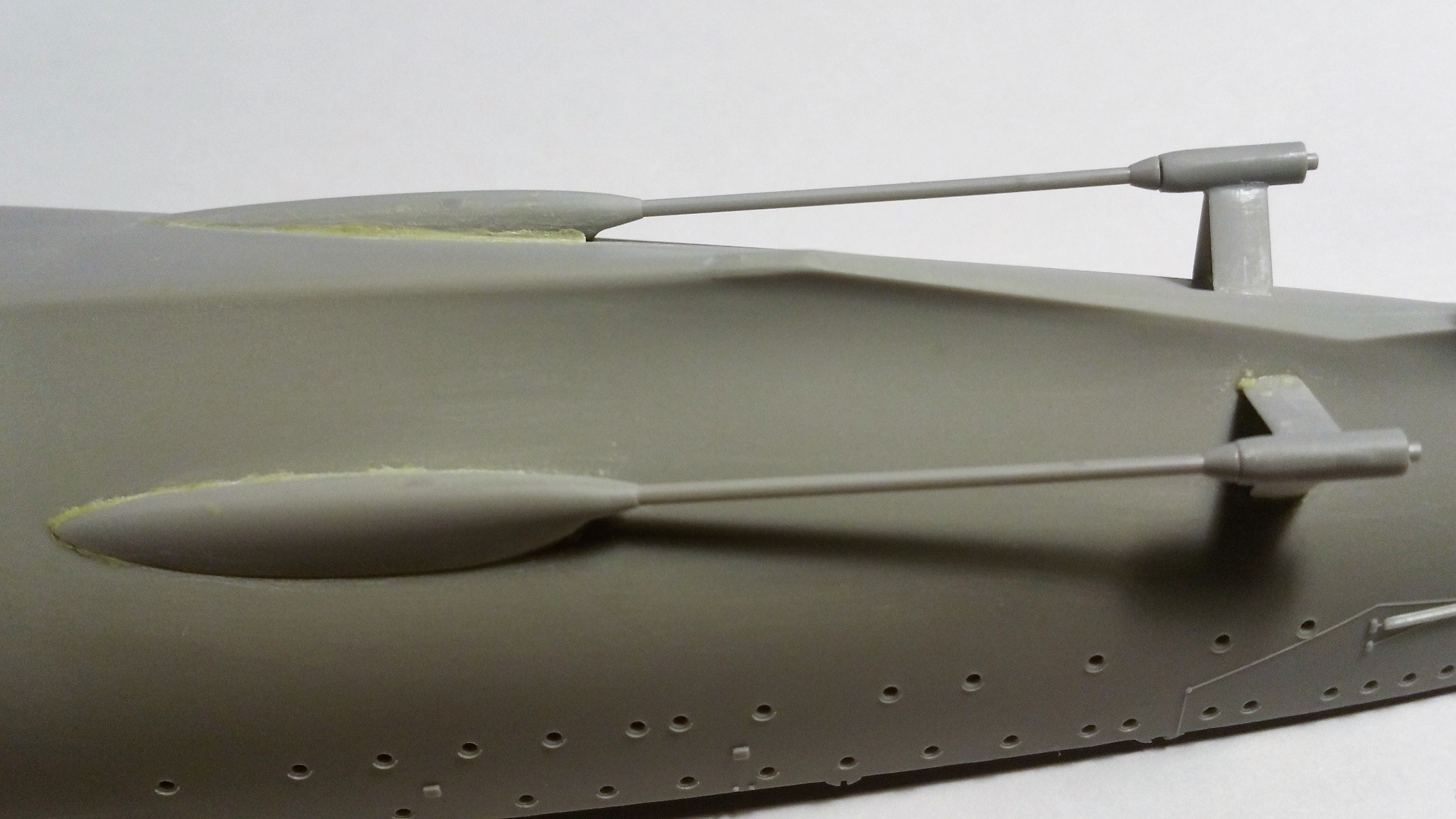 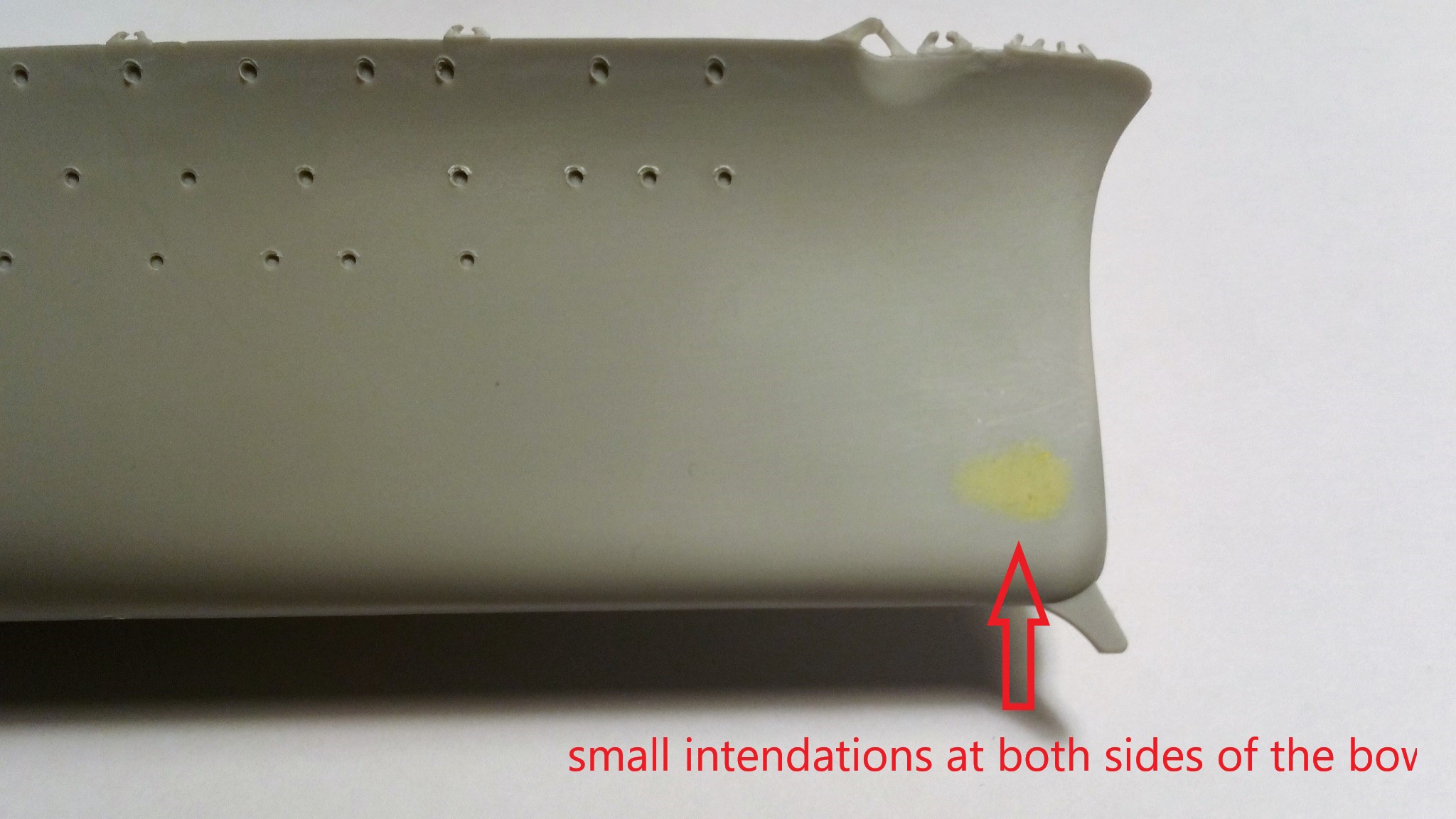 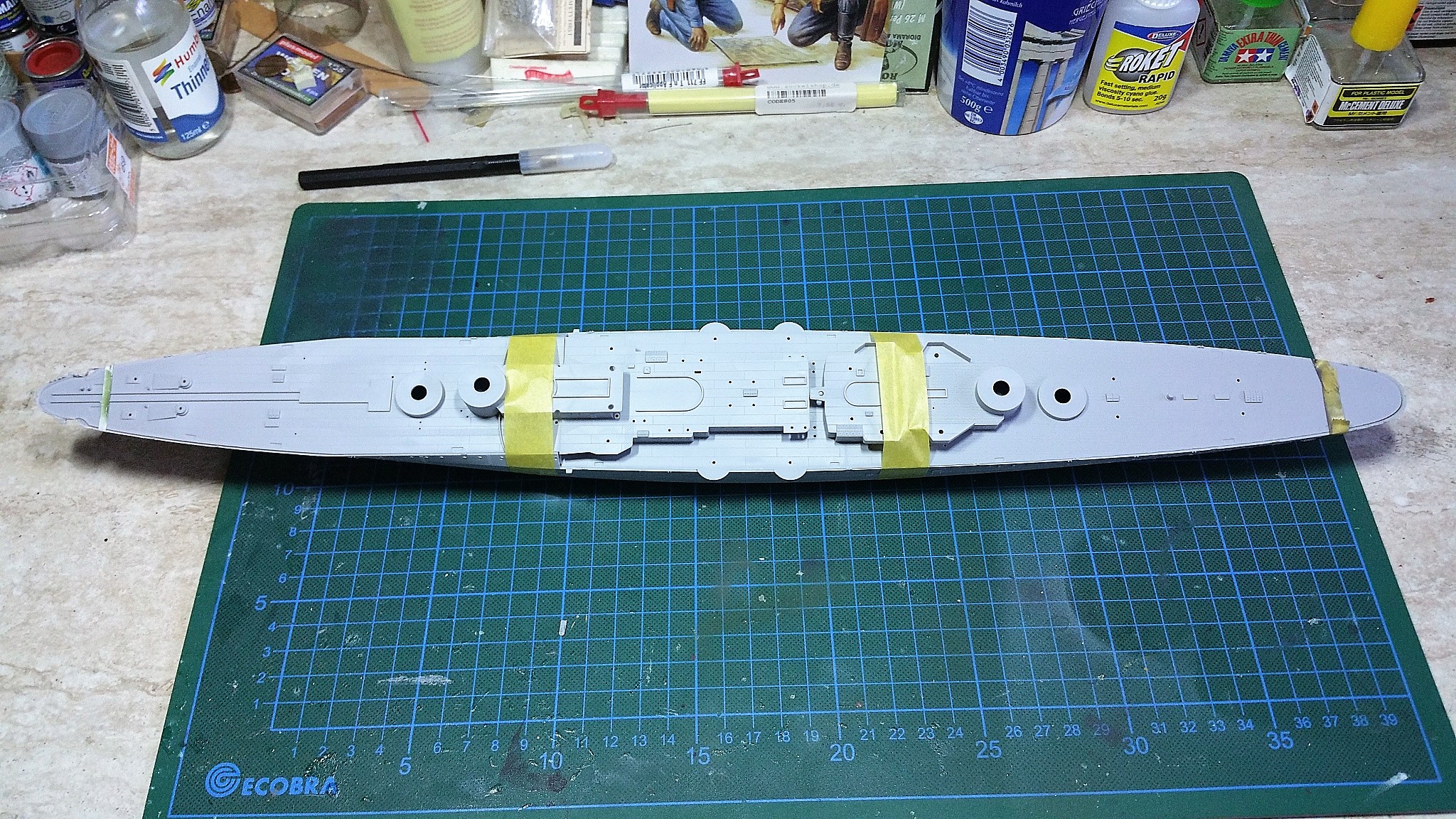 ...and discovered a misalignment between two decks. Even with taking care that the frontal deck is even with the two sidewalls of the ship the middle deck doesn`t fit properly together with it. I will need to rework this part with a new Evergreen wall or just putty maybe 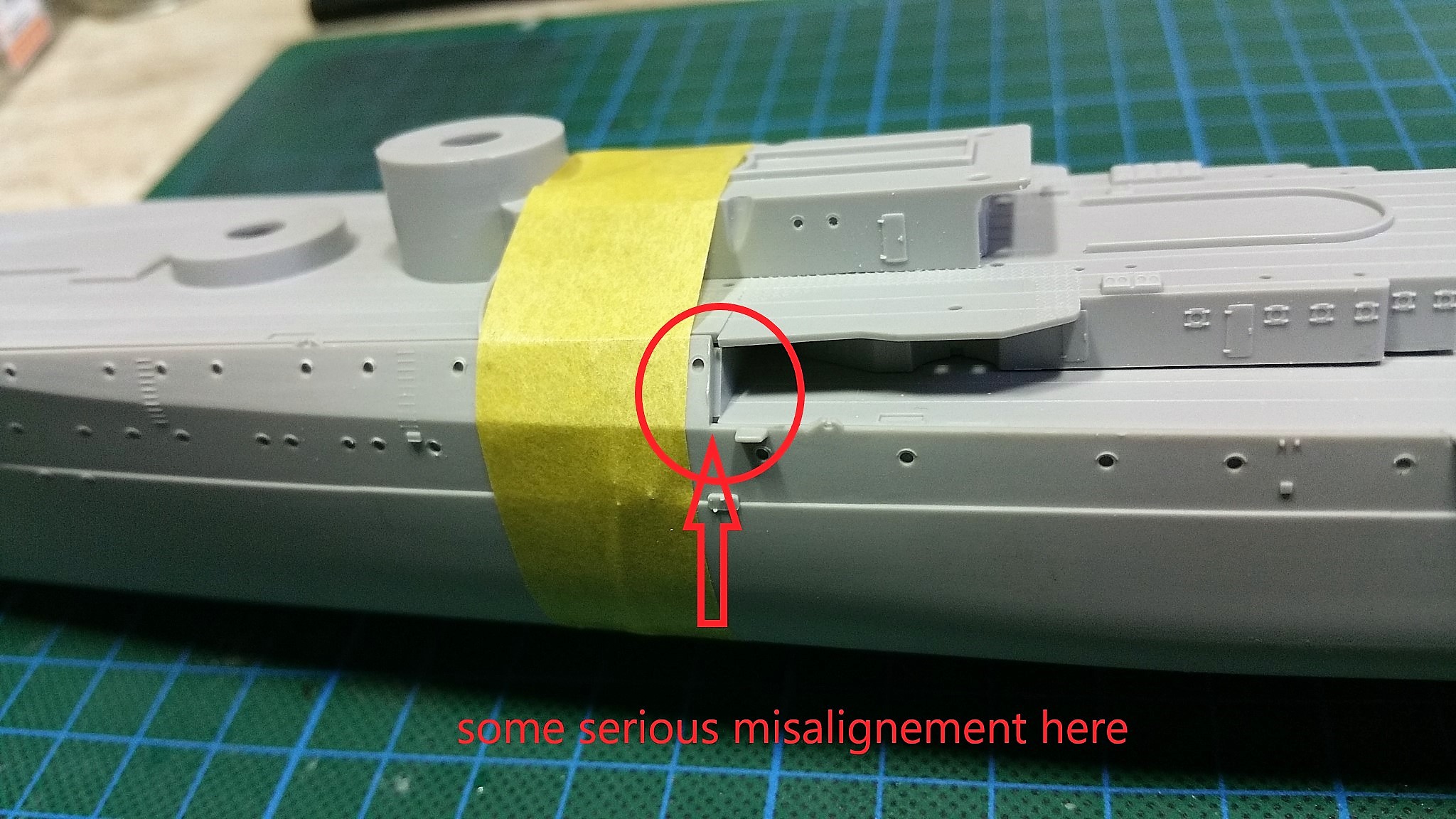 Also the ship´s Stern deck is a bit too short. I will need to use putty here too. As there will be used the aftermarket wooden laminate deck I think this will not be a visible thing later 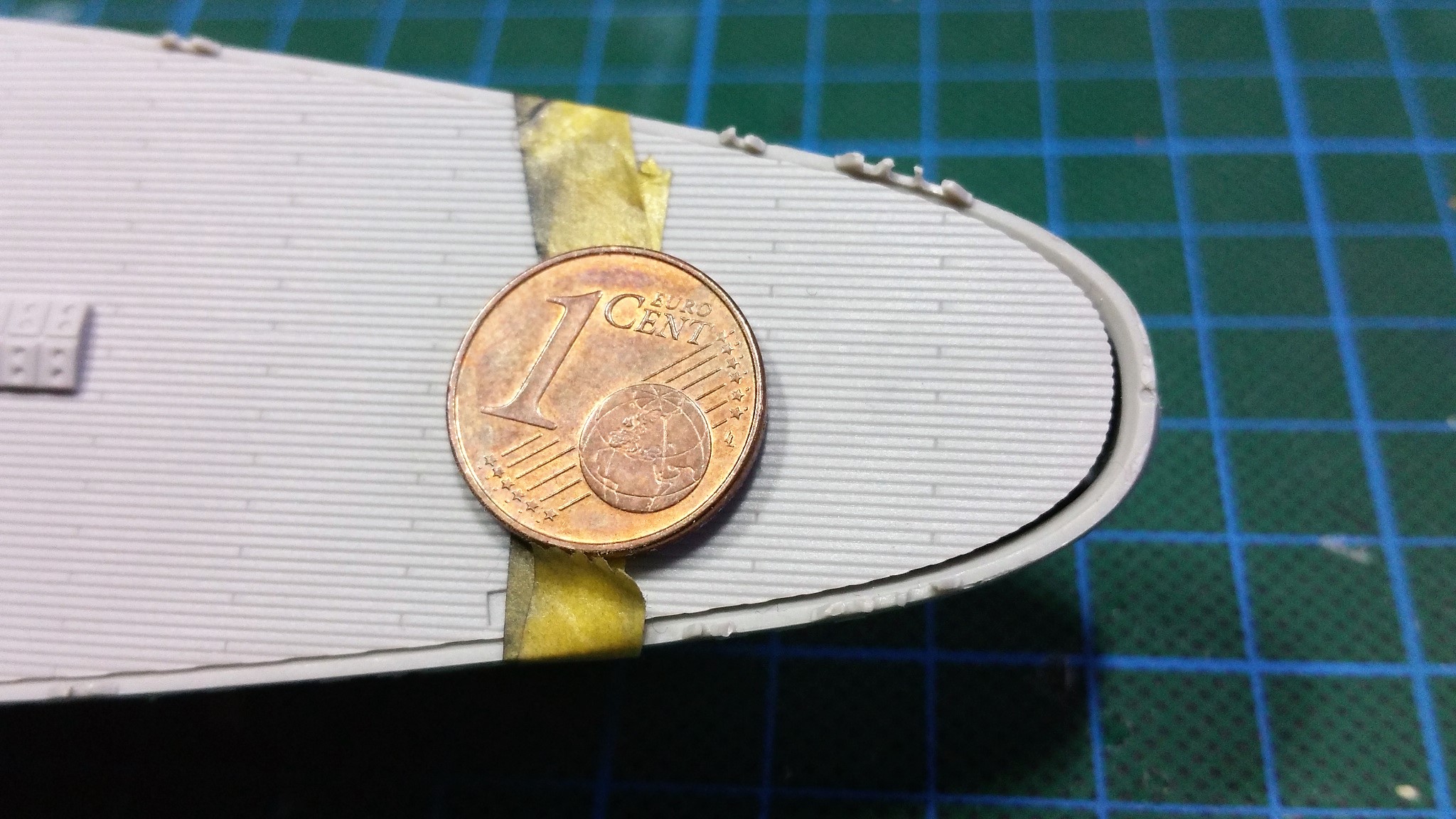 This is how the ship will sit screwed with its socket right from the beginning on before I will glue the stern deck part on top. 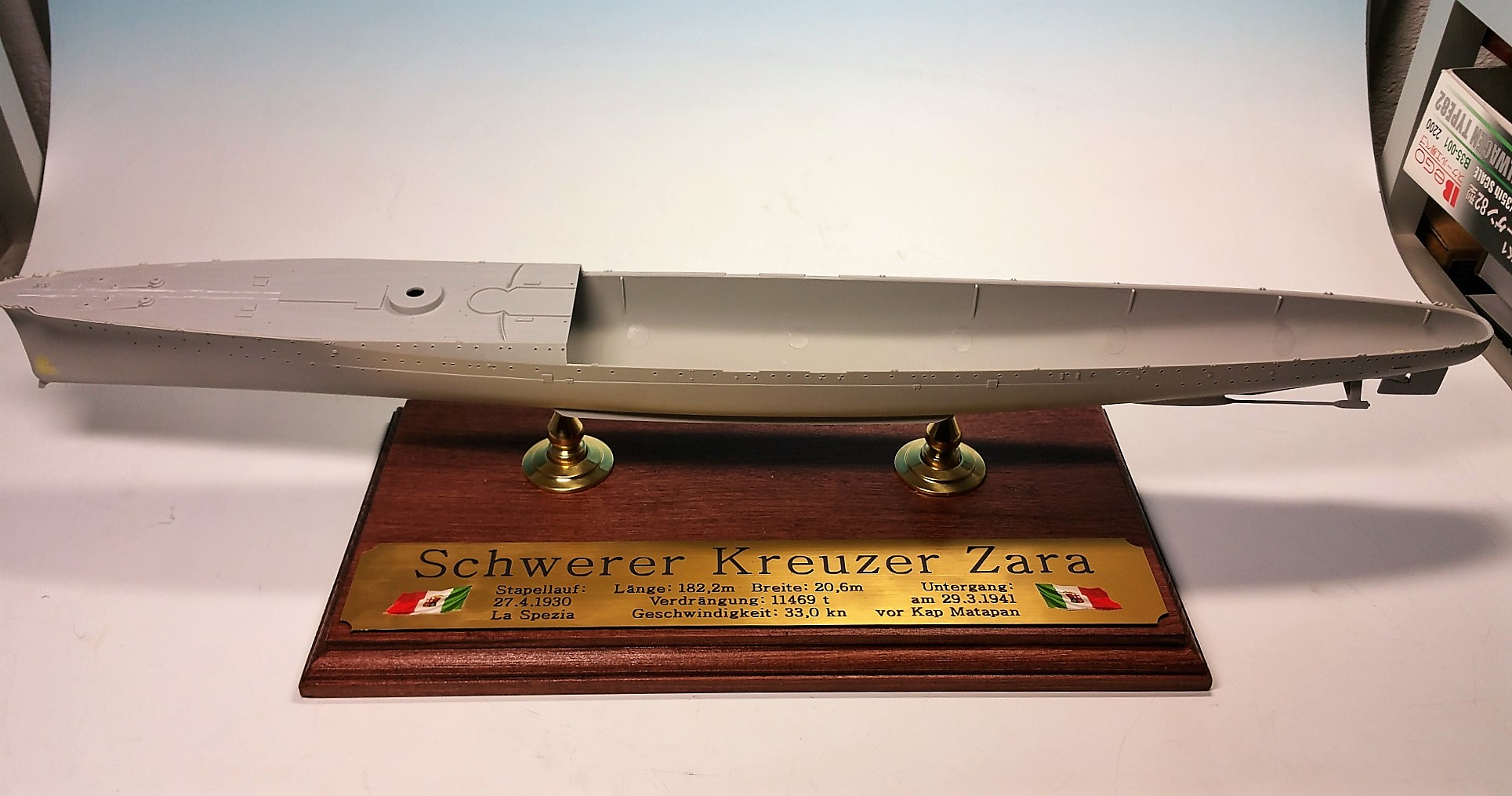 I am along for the ride too.


Fantastico to have you aboard, too Si!

REPLY & QUOTE
RedDuster (SimonHeathwood) said
I am along for the ride too.

Where is the Popcorn. Watching this one with interest.....Cheers mark

REPLY & QUOTE
surfsup (Mark Partis) said
Where is the Popcorn. Watching this one with interest.....Cheers mark

REPLY & QUOTE
Quincannon (Chuck Treese) said
Me too Thomas. To me the Italian Navy cruisers are far from beautiful, but at the same time possess a certain elegance all their own. I do wish Trumpeter or someone would come out with an Italian Navy destroyer in 1/350 scale

Until now since I started to model surface ships I finished five ships; the heaviest was the Dingyuan battleship with 7.144 ts. displacement.
Now I feel fit for something slightly more complicated and bigger than the kits before but, as I seem to have a soft spot for, I want to stay this time with a cruiser again:

I decided my next build will be the italian heavy cruiser ZARA in scale 1:350. The ship itself with its 14.300 ts displacement looks elegant to me and was good armed for its class, took part in Italy´s occupation of Albania and was involved in diverse convoy hunting actions. It´s motto was "tenacemente" which means "tenacously".
The ship finally met its fate when it, together with five other ships ran unawarely into three british battleships off the Greek coast. The british opened fire at, for their big BB guns, point blank range and shot the Italian ships into pieces within just 3 minutes without noteworthy opposition. The british ships had radar but the italians not, having their guns still in resting positions as they were completely unaware who was approaching...

This is Trumpeters 1:350 scale kit of this specific ship. Very nicely done as far as I can say now 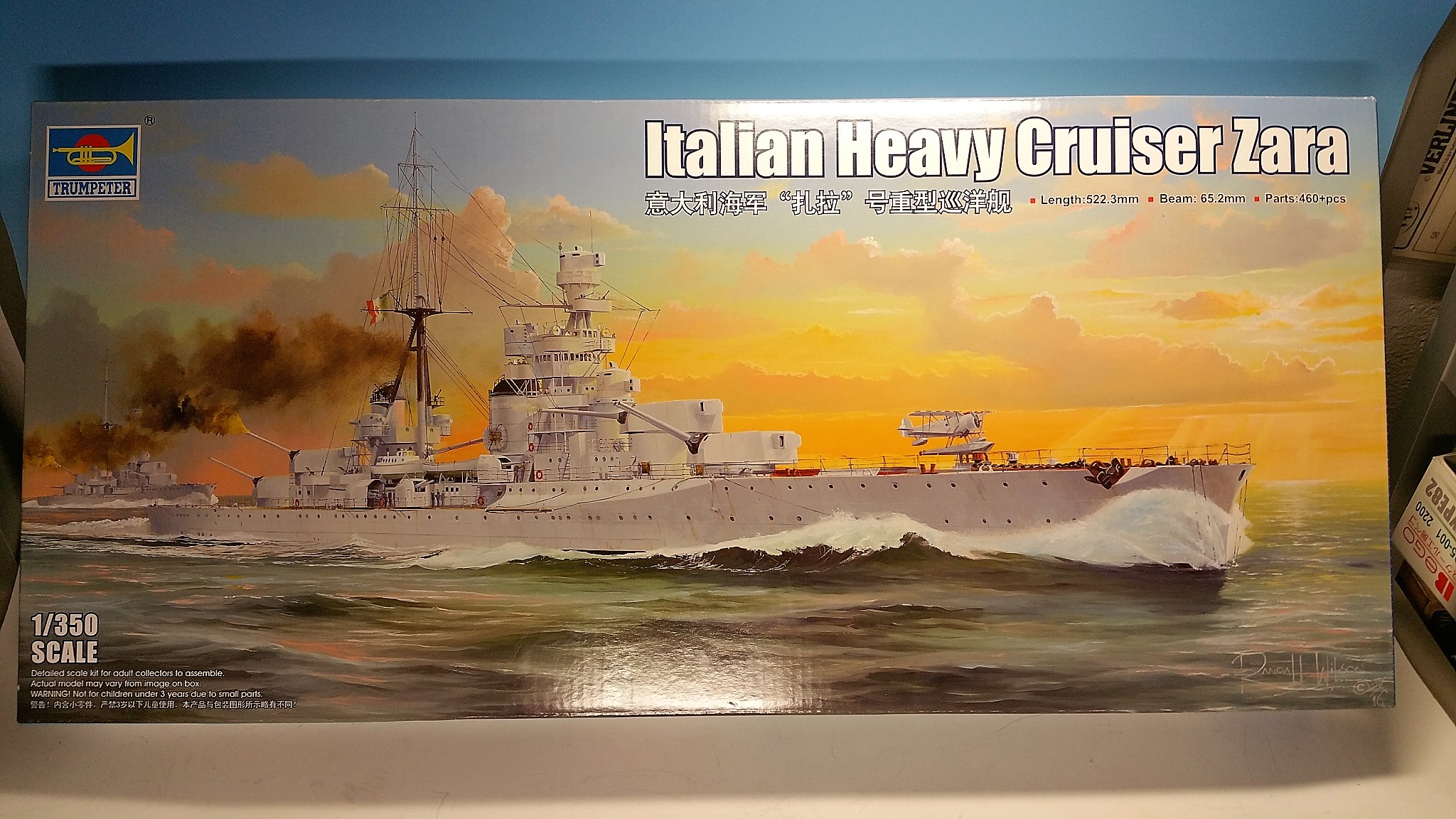 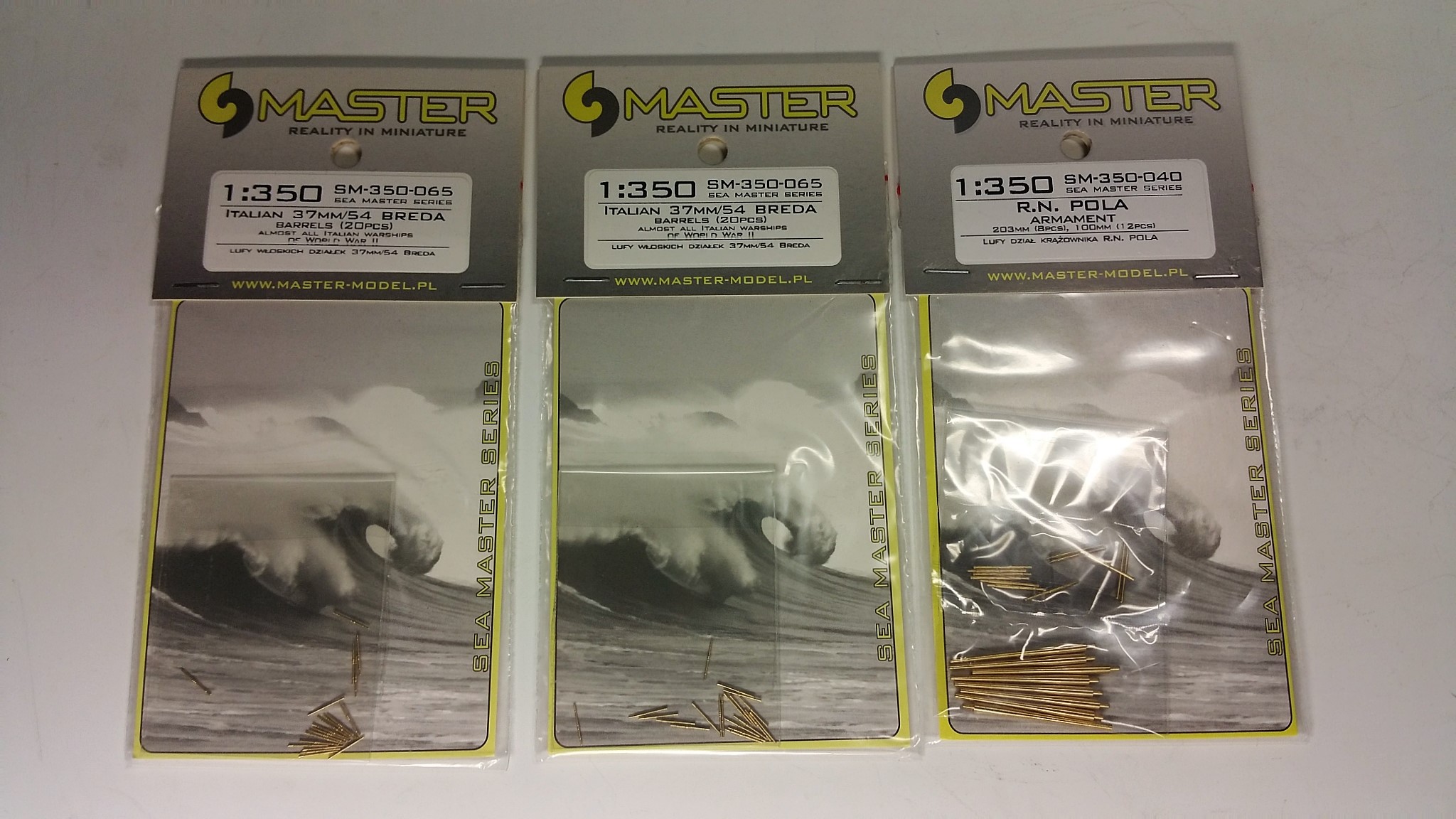 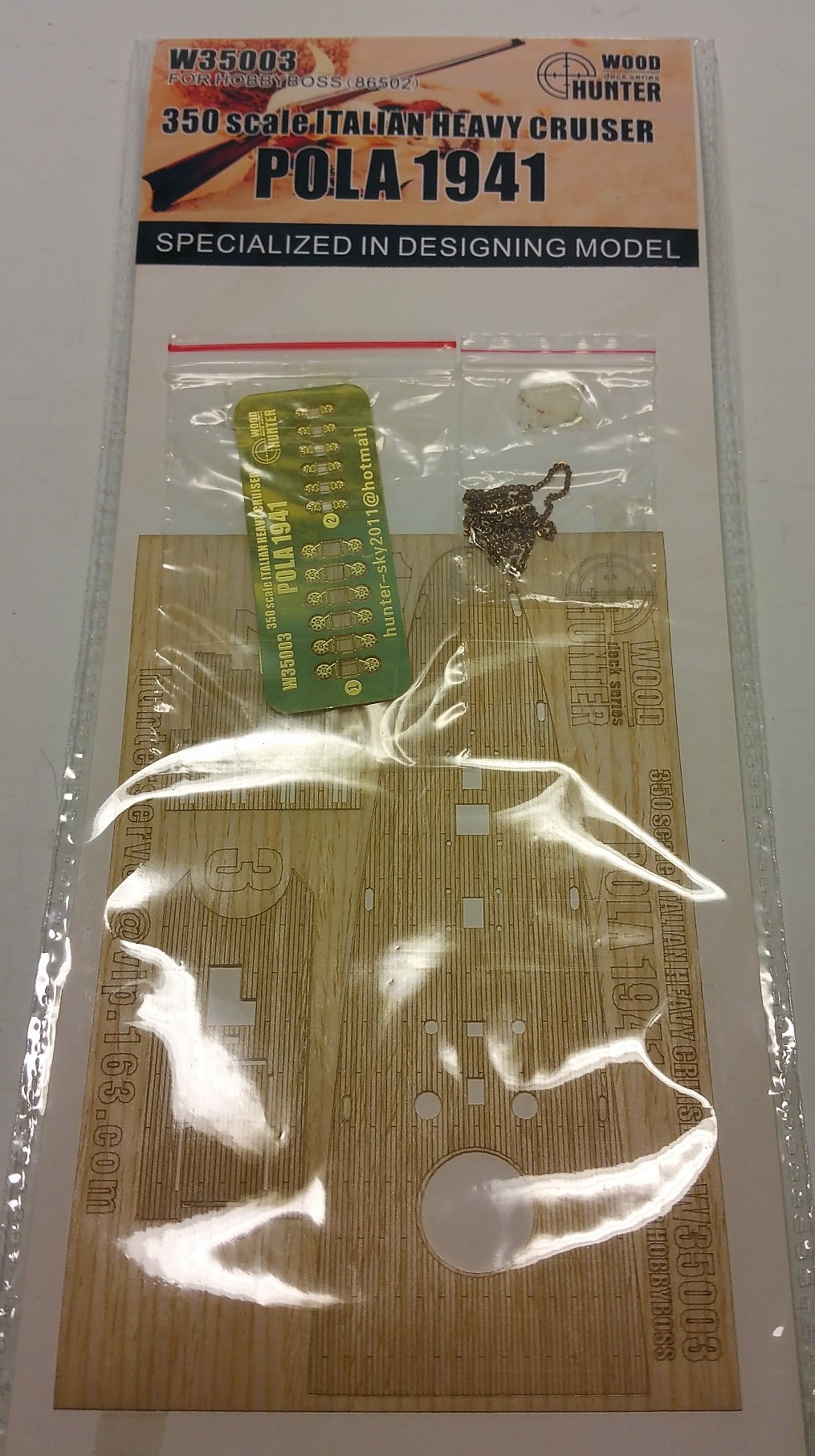 And there is a very nice upgrade set from the chinese company SHIPYARD WORKS for this specific ship which drew my attention and arrived yesterday at my harbor:

This set is so nice! There are six etched platines (flyhawk like quality), turned barrels, a wooden deck for the ship and the smaller cutters, masking paper and a colored instruction manual. Everything carefully packed inside this attractive aluminium box. At the first glimpse at the parts and the instruction I can say it looks like it will improve the already nice kit a lot! 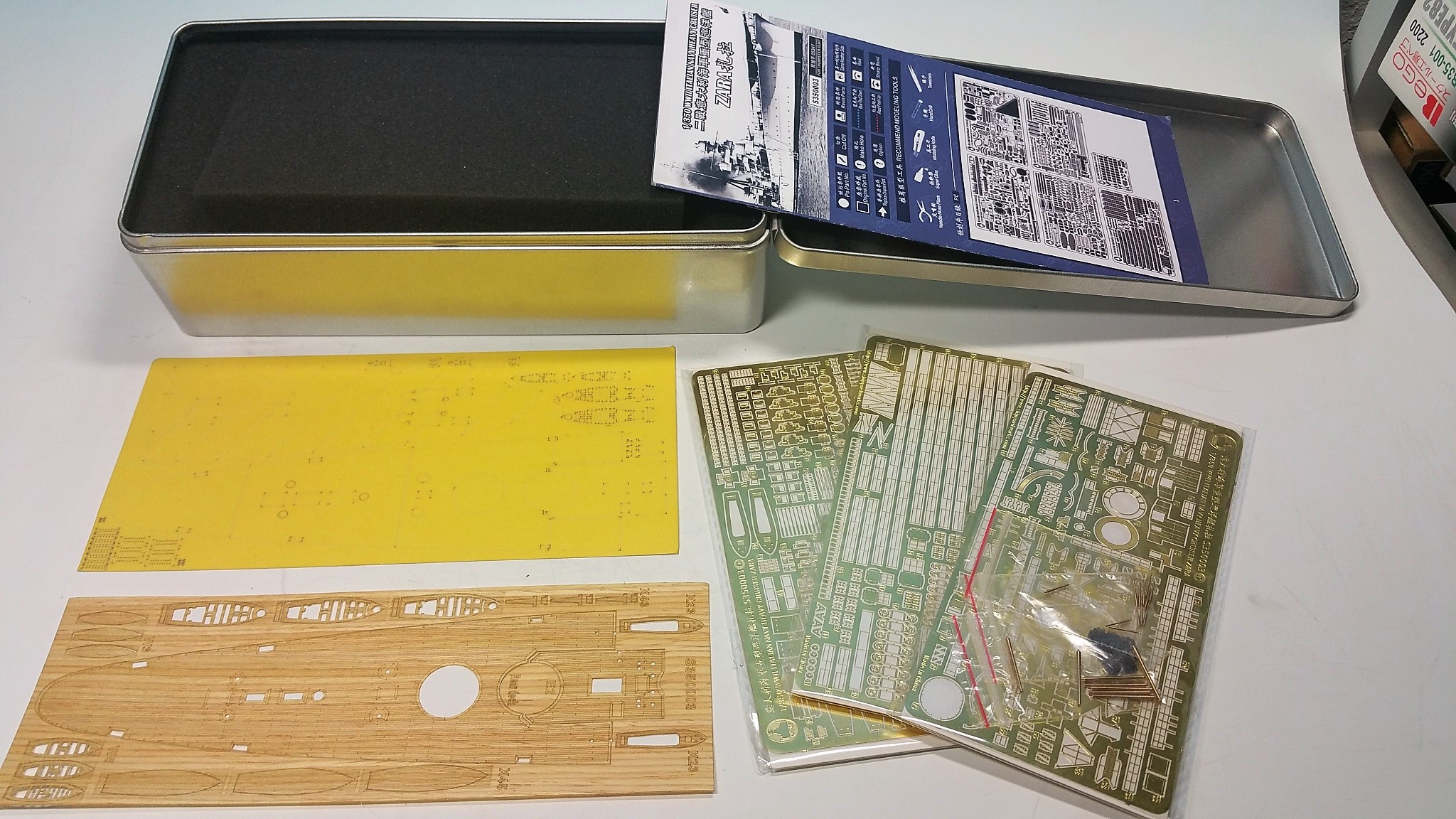 Whether barrels and wooden deck I will use I will decide later on. 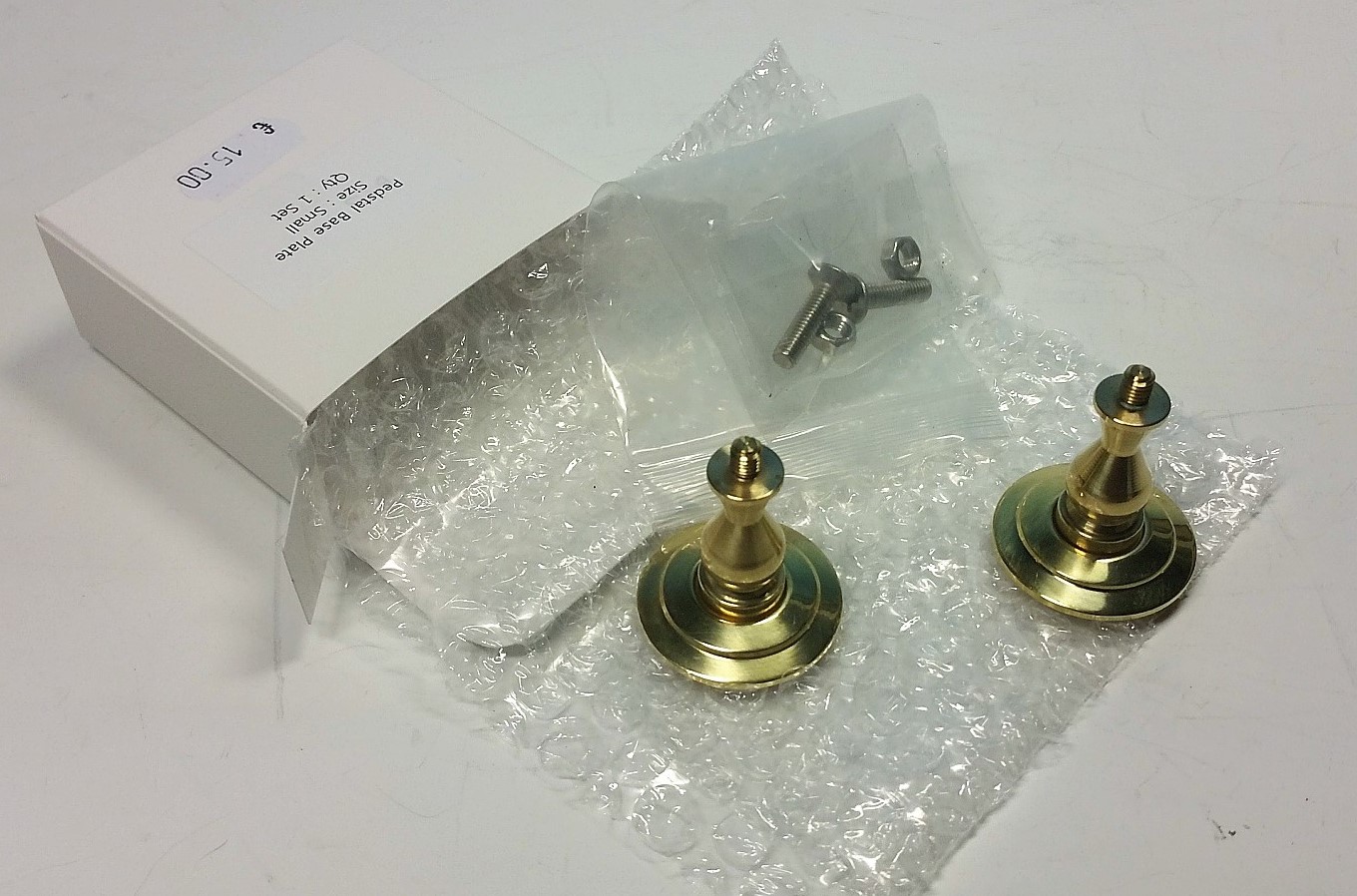 I just still need to buy some small extra stuff (turned brass rods for the mast, the right grey color for it and a wooden socket from the carpenter - then the games can begin shortly!

Would be nice to have you aboard again