You are viewing the archived version of the site. Go to forums.kitmaker.net for info on latest news and other content.
mainArmor/AFVTanks

I bought and built my first kit in 1989. Since then it's been on and off until about 4 years ago, when modelling became the main stress-relief technique. Starting with 1/72 aviation I've diversified into armor, trucks, artillery and figures, as well as a number of other scales.

Hisham
Thanks for a great, comprehensive review, Peter. The only thing I'm not crazy about are the one piece wheels and track.. but other than that it looks like a really nice kit. I'm expecting a lot of nice things from Tiger-Models Hisham
OCT 07, 2015 - 01:44 AM

Vodnik
It's a pity that main reference for this kit was the Tamiya 1/35 one, not original research... Several features present both in this kit and in Tamiya kit, but not existant in the real M1 make it clear.
OCT 07, 2015 - 07:36 PM

Vodnik
Take a look at the bottom hull tub - with the flat area in the center. In the real tank there is no such flat area there. The reason it exists in the Tamiya 1/35 kit is that originally it was designed to be motorized and this extra internal space there was needed for motorization parts (batteries?). Of course there is no reason for it in this small scale kit, but designers just copied the Tamiya kit feature without understanding its purpose. You can compare Tamiya kit part with other 1/35 kits: 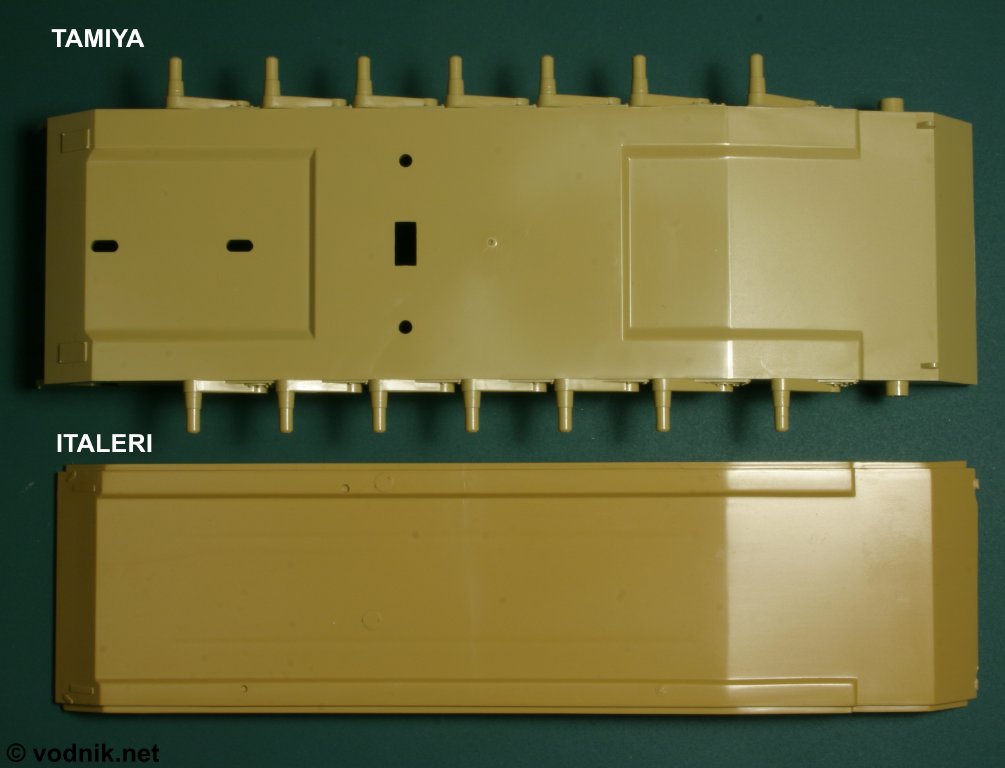 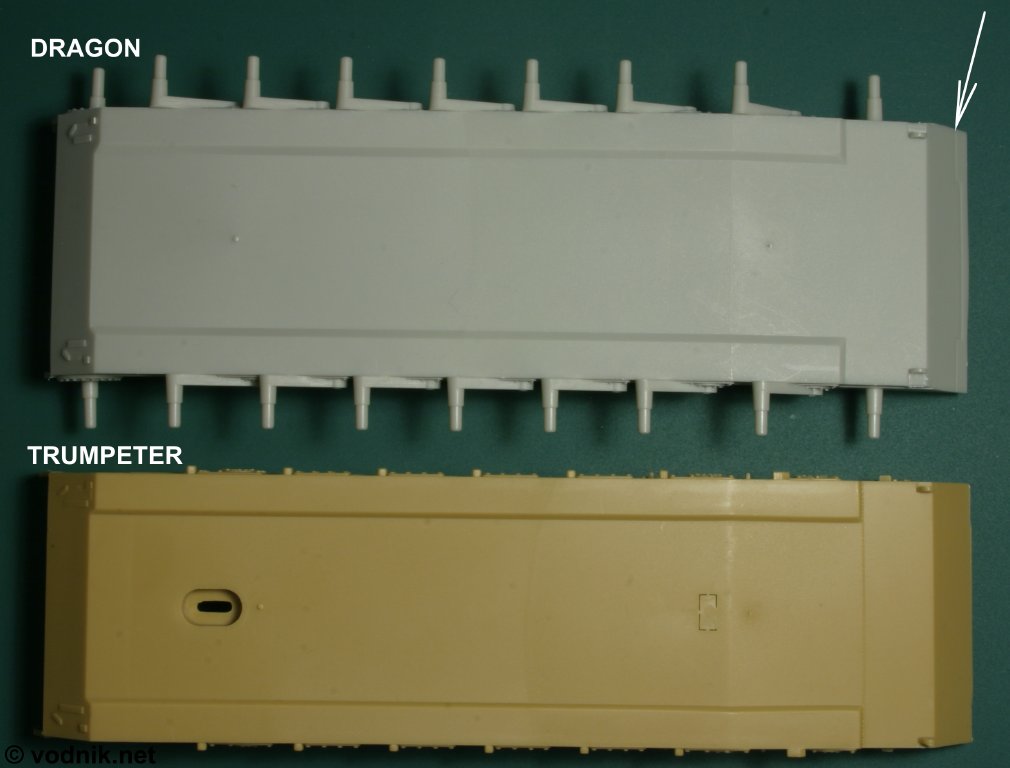 Only Tamiya (and not shown here 1/35 Academy kit which also was mostly a modified copy of the Tamiya kit) has this flat bottom as you can see. Another example are sizes of the rectangular suspension mounting plates on the hull sides. In the real tank the first, second and seventh (last) larger plates are IDENTICAL. But in Tamiya kit (and actually all other 1/35 kits except for newer Dragon M1A1AIM and M1A2SEP kits) the sizes of those plates are different - particularly the second one is too small. Also above the suspension mounting plates is a thicker armor plate along most of the hull length. It is represented in most 1/35 kits - although usually extends too far to the rear, but is missing completely from the Tamiya kit. And also missing from this Tiger kit. If designers of this tank used the real tank research, they should include that detail. But instead they based their design on Tamiya kit part. Tiger: 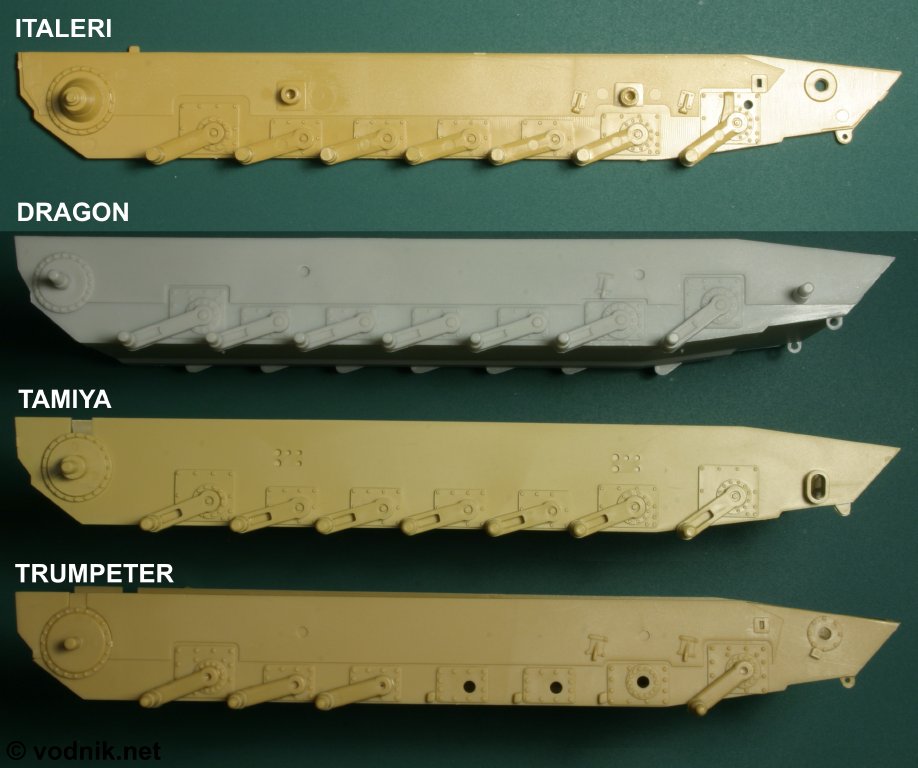 This is not the best angle, but you should be able to see the correct lower hull configuration as in the Dragon M1A1AIM kit (photo "borrowed" for discussion purposes from the AMPS website):

And a disclaimer at the end: I'm only posting this information because I was asked for it. I don't say that the Tiger Models kit is bad - it is probably one of the best, if not THE best modern Abrams in this scale (I don't know - it is not my scale). I just point out that it could be even better if some more effort was spent on research rather than just copying other manufacturer's design.
OCT 08, 2015 - 12:10 PM

C_JACQUEMONT
Exactly unless it's turned over or on a steep climb descent it will be hard to see anything. I have the same benevolence for wrong interior detail that won't be seen once the top hull / turret is on and suspension stuff hidden behind skirts... The older I get the more I think it's all about priorities and compromise. If the model is 80 to 90% right and what is normally seen when teh vehicle is on its base, I'm happy. Now say the outside proportions are entirely off, the gun is too long or too short or the wrong thickness that's another matter. Cheers, Christophe
OCT 09, 2015 - 11:24 PM

Biggles2
Comparing this Abrams to Flyhawk's shows the Flyhawk kit is much better, but so far they have not released a TUSK version. Wondering if the TUSK specific parts from Tiger would be compatible with Flyhawk's M1A2?? Any comments?
MAR 10, 2018 - 05:18 AM
_VIEWINFORUMS