REPLY & QUOTE
yeahwiggie (Ron van Wiggen) said
Here I am again, on vacation in Sweden, with weather not that good and as it has become a tradition of mine to do some building and show it here.
This time I went for something completely different. Instead of the usual halftrack, I went for a T-54! Yes, you read it correctly.... I went of my usual path and I am being "punished" for it.
I am building Trumpeter's T-54A and it doesn't live up to the expectations I had from a Trumpeterkit. More of that later. First the backgrounds. I want to build this T-54A as an upgraded version, as used by the Vietnam NVA-tank during the Easteroffensive, which means a barrel with fume-extractor and different runningwheels. The barrel in the kit is quite useless, so a metal part will be added and the later style wheels were giving to me by a fellowmodeller at Twenot.
The kit rubberbandtracks are even worse than the barrel, so they were exchanged for Tamiya rubberband tracks. These, however, do not fit on the Trumpeter idlers, so these need to be replaced, too. The same goes for the DshK, which has a distant resemblance to the real thing, so that must be changed....

Here are some pictures I made, so far;
The tracks, with the problem being evident:

The fit of the hull was bad and there were plenty of gaps to be filled up. I used stretched sprue and evergreen, softened up with glue and, once fully cured, sanded down.

NVA tanks look quite beaten up and used in the pictures, so I wanted to have worn wheels for this vehicle. I sanded them all down, because they had these strange ribs on them. I cut out pieces here and there, made curved edges and with one wheel I removed the rubber band completely:

And the troops that will be joining the vehicle:

I am building Trumpeter's T-54A and it doesn't live up to the expectations I had from a Trumpeterkit.

I not sure why that should come as a suprise, people have been posting on here for years what junk the early Trumpeter T54/55 kits are.

REPLY & QUOTE
afv_rob (Rob Harvey) said
I look forward to seeing what you do with this, but yes the Trumpeter kit is a real pig.

REPLY & QUOTE
'As all else failed we raised our fists and weapons,
Not born as soldiers, but driven to the end'

REPLY & QUOTE
lukiftian (Kevin Johnson) said
The strange ribs on the wheels are over-emphasised, but they're supposed to be there.

This kit is a horrible beast still, but I will finish it!

I added the T-62A sprocket and idlers, which still are an improvement on Trumpeter's kit.... which is saying something. 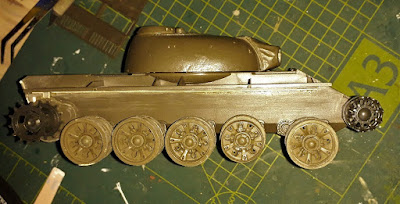 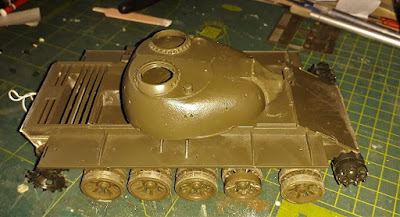 For my build I am focusing on the battle of An Loc, but from what I have read it does not really matter for the T-54. They all appear to share the same characteristics; they are pretty bare, lacking many parts such as mudguards and external fuel drums. Actually I could not find any pictures of T-54's or 55's in action that had them. Some did retain the carriers for them and I added them too, even if out of aesthetic aspects. I also added one mudguard, for the same reason. I did however leave of the shovel and pickaxe. They look horrible and I figured that tanks this disheveled and campaign worn most likely would have lost them anyway.

This time I did add the fuel lines around the fuel tanks, but doing that showed that the dimensions of the tanks and their placement seems faulty, especially near the turret ring. No matter. Now there is something instead of nothing. Made out of telephone wire by the way, with the insulation being the connectors.

The tow cables is made from the cotton string that came with the kit. I tried making my own by twisting copperwire, but even a 4 strand cable was way to thin. So the cotton strand it was and I made it more rigid by applying glue to it and shaping it over the tank, letting it sit to harden. 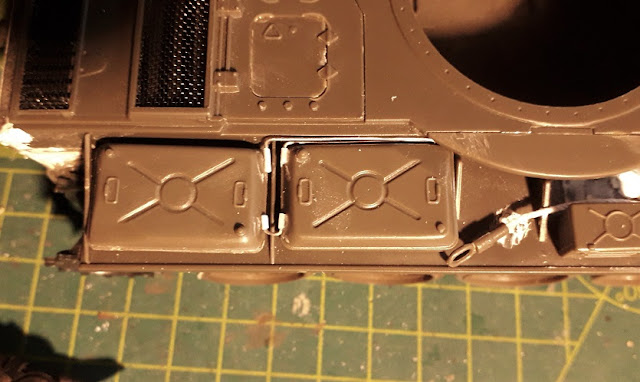 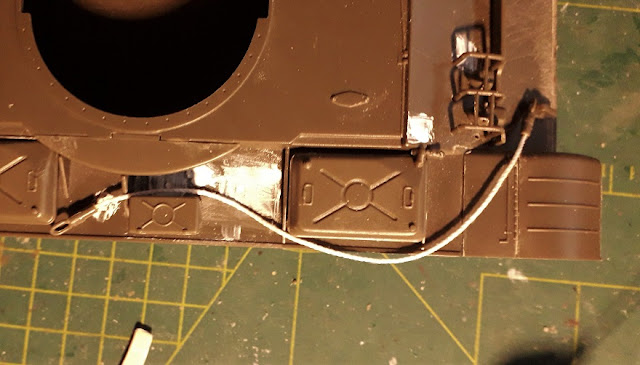 The kit comes with a myriad of extra, unneeded parts, which I assume would be used in other versions like indeed a B or T-55's. Among them were parts for 3 ammoboxed, spread out over the sprues. You can guess the fit of these 4-part each boxes by the amount of filler needed. I assembled all the other stowage- and toolboxes too. Reduces parts on the table and I get an idea what to use them for later. 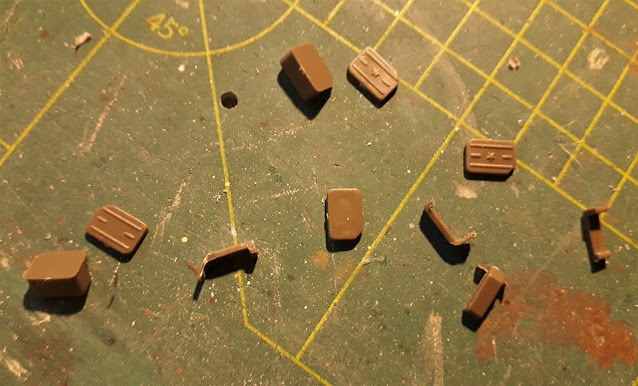 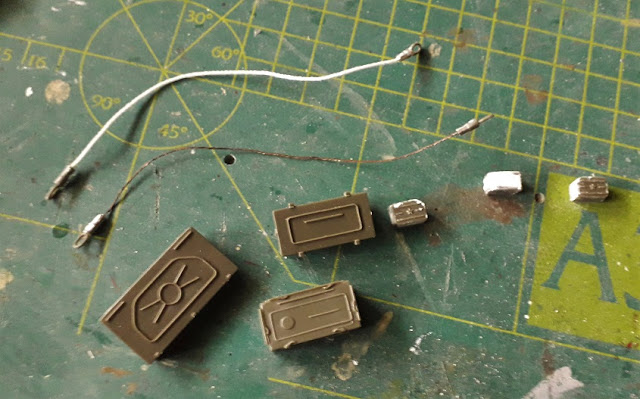 Many of the more delicate parts had ridiculously thick attachments, which made the risk breaking those parts a real thing.... 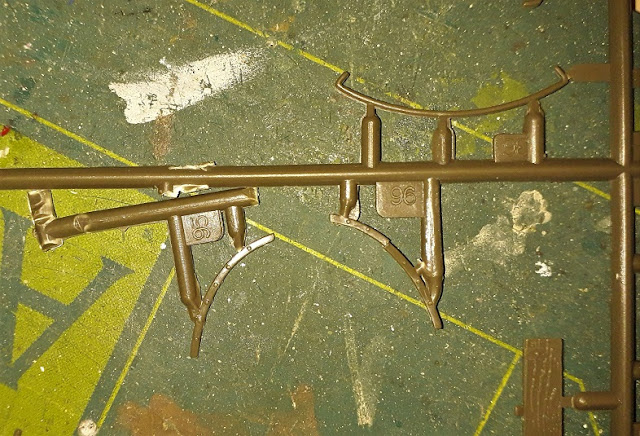 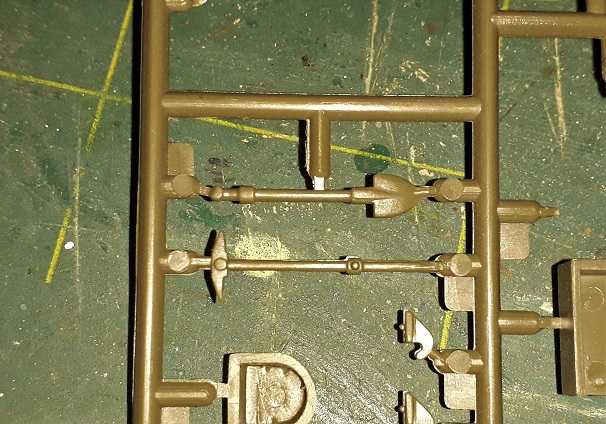 The wheels in various stages or wear and tear. Way at the beginning I thought it would be cool looking to show a wheel with the rubber band worn off and I added one of the original wheels to make the other side a bit more interesting too. I have photos actually showing the use of A-wheels on B-vehicles. Logistics, I suppose.
The vinyl hubcaps are a pain in the lower rear end to clean up! Lots of flash (see the arrows) These are originals, the wheels are Tamiya's T-55 versions. 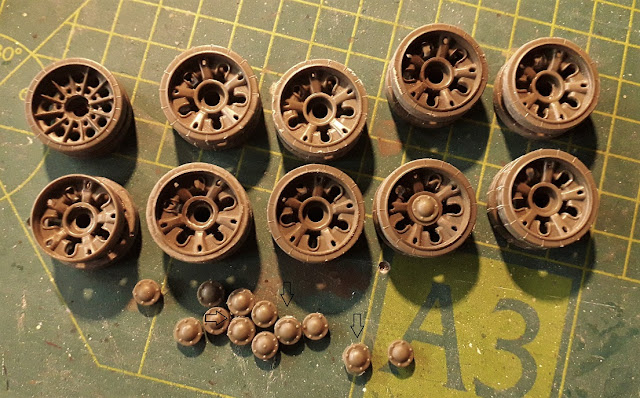 Beat that kit into submission! Make it look like something despite itself!

REPLY & QUOTE
MassimoTessitori (Massimo Tessitori) said
Hi, pity that you have already joined the upper and lower parts of the hull, an important work to improve the kit was to remove 2-3 mm from the junction area, lowering the hull. This would have shortened the frontal plates too, improving size and proportions of the model.

REPLY & QUOTE
yeahwiggie (Ron van Wiggen) said
But doing so would require major surgery in order to make sprocket, idler and tracks to fit. It is tight as it is.

REPLY & QUOTE
jphillips said
Looking good so far! But what were the East Germans doing in Vietnam?

REPLY & QUOTE
iguanac (Marko Milosevic) said
Ron,
it is bad that you missed the opportunity to lower the chasis for about 2mm (i did it on mine!).
It is good that you changed the drive sprocket, as the trumpeter one is way smaller than it should be - which is good if you are thinking on some aftermarket tracks. I used Trumpeter link by link ones, and they are good, but now you also have the option of Miniart tracks. Consider replacing the barrel with metal one, it costs 2-3EUR but it is significant improvement.
Good work!
Marko

REPLY & QUOTE
yeahwiggie (Ron van Wiggen) said
The final part of the construction was the turret. A fairly basic enterprise really, but!! It got an extra; a turned aluminium barrel. I had ordered that a decade ago and now it final made it to its destined position. It is the first time I used such a barrel and I found out that paint sprayed on easily chips off.

Like I said before NVA tanks look quite bare, so I wanted to add some more visual interesting things, so some tarpaulin rolls and the extra MG ammoboxes are added. I used putty on top of the rolls in order to make them fit the grab rails and well onto the turret side. I had to carve the back of those rolls quite considerably. 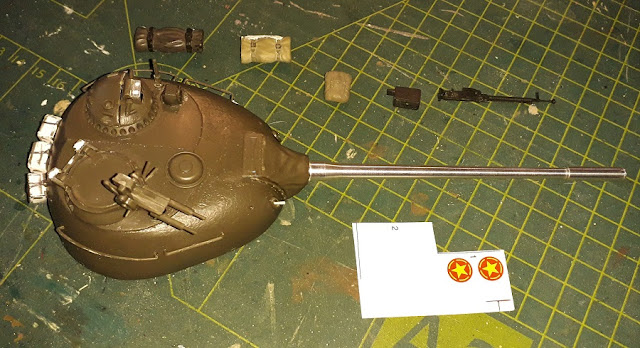 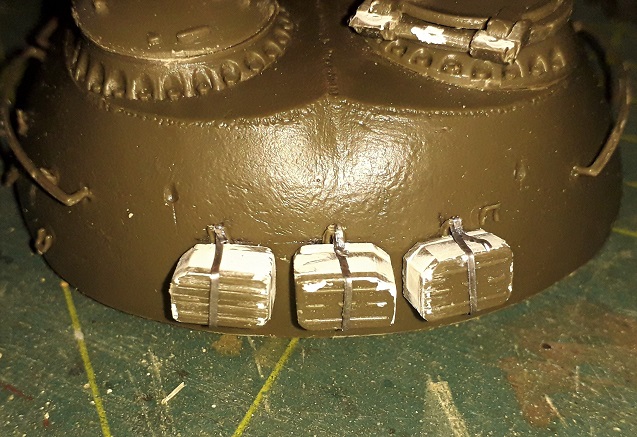 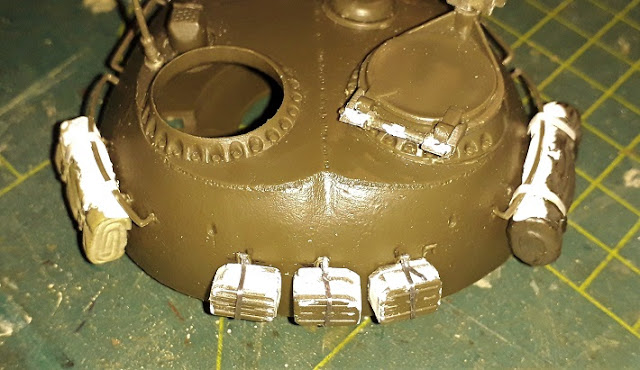 The coaxial machinegun was actually nothing more than a small pip of plastic, so I manufactured a new one. Drilled out the port in one go as well. You can again see quite a bit of filler, but I am liking the white one less and less. It collapses considerably when drying. 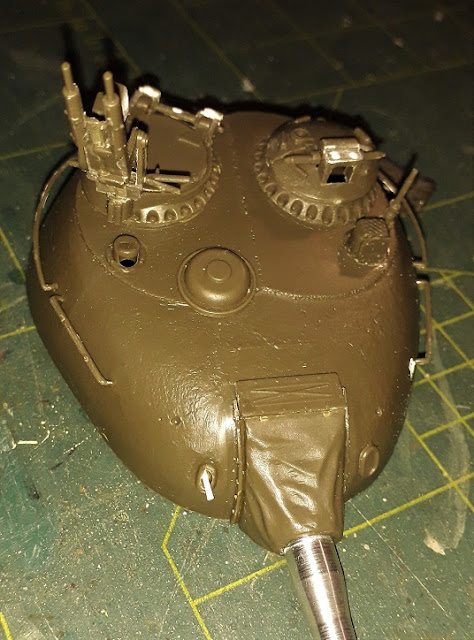 The trick with adjusting vinyl tracks; cut the shape of the link, so you get more attaching surface when superglueing them. You'll need that!
The part to the upper left is what was meant to go on top of the left mudguard as spare links. I replaced that with the bit of vinyl on the top right. I think it is clear why... 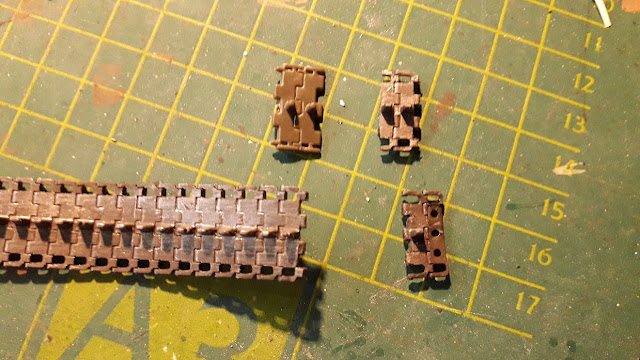 REPLY & QUOTE
yeahwiggie (Ron van Wiggen) said
And all of a sudden...... it was done. 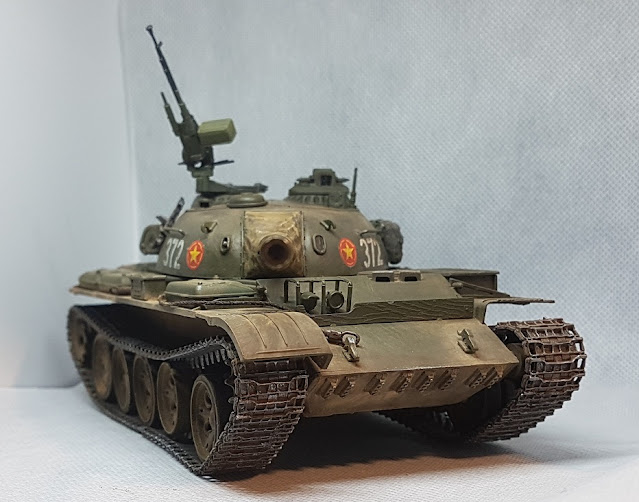 After a decade this was is finished too. It certainly was no easy build and Trumpeter hopefully has improved on their models since the 1990's, when the basis for this one was originally released. Fit was not always good and the instructions very confusing and incomplete. Dimensions and details far from accurate in places, but in the end it looks like a T-54.... to a good extent.

The main colour is Tamiya XF-81 Dark green, which is a considerably lighter and more greener dark green than the XF-61 Dark green. I chose a lighter version because of the more extensive weathering this kit was going to have. That weathering consisted of a neutral grey wash by Mig, followed by the dark variety, topped of with the brown one around and on the running gear.

Wrestling the tracks meant reglueing on a number of occasions and liberal amount of superglue had to be used to keep the tracks in place. As long as I do not touch them, they remain there.

The tracks were painted natural steel in the places the metal gets worn, followed by the afore mentioned washes after which I added some "rust" powder, which looks almost bordeaux red. The final touch was drybrushing again with natural steel.

I then covered the entire lower half with a ground down reddish brown pastel, using more of it the further I went toward the rear. Some very light dusting was done the higher up the tank I came.

Some touch ups have to be done as the pictures made evident. The headlights need paint, the antenna mounting, the base of the main gun and I will remove the spare track on the turret. Doesn't look right. Some weathering around the turret DShK is needed too.

All in all I am quite pleased with how it turned out after all. 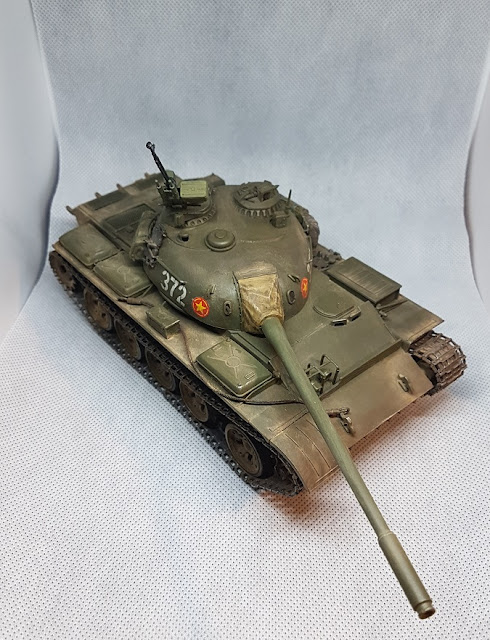 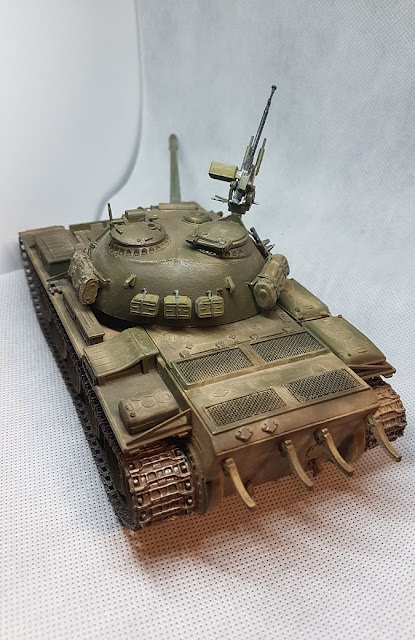 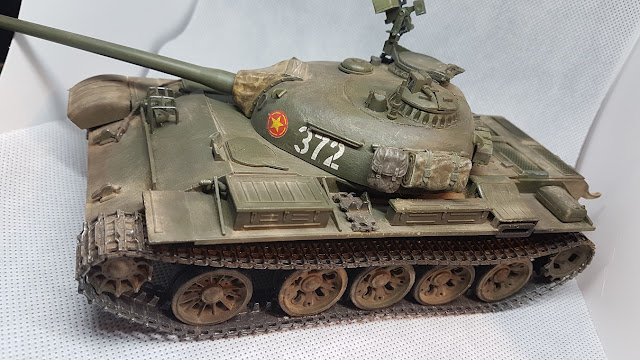 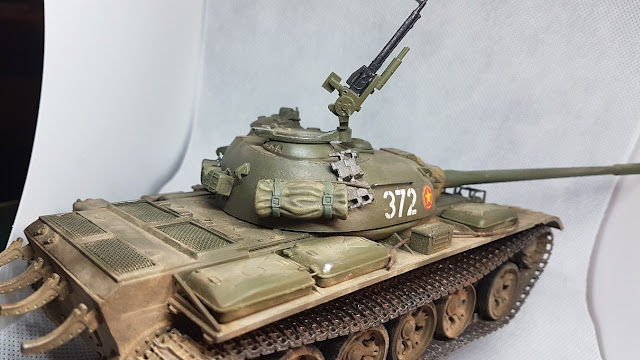 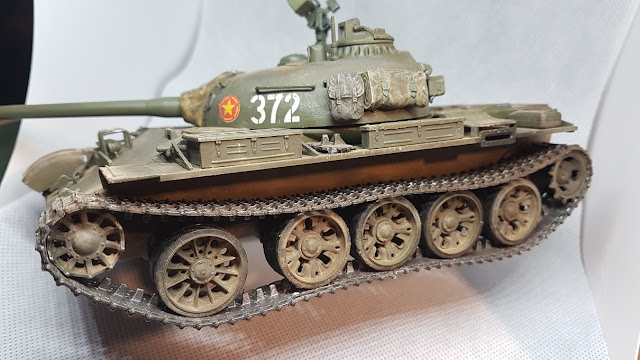 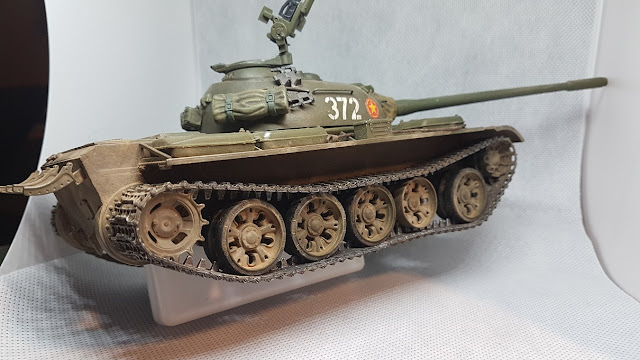 REPLY & QUOTE
ColinEdm (Colin Key) said
Ron, you did a great job on that old dog of a kit! It looks awesome!