Considering what the kit market offers, to model a T72....it could be necessary a good t72 kit

cool links, not all working though.

REPLY & QUOTE
DerGeist (Erik) said
When the Ual turreted T-72's were first fitted with the IR light it was to the left side of the mantlet, then they were moved to the right when the major modernizations took place. Good vid.

You have to change the turret, the iraqui tanks are T-72M1 and the tamiya kit is a rare version with T-72M1 hull and T-72M turret of the DR army so the problem is not the glacis but the turret

SBS has produced a nice aftermarket turret for the T-72M. It comes with decals for a tank in Iraqi service.
http://umm-usa.com/onlinestore/product_info.php?manufacturers_id=103&products_id=5231

REPLY & QUOTE
mat said
I was wondering if the 1:35 scale drawings in the WWP book can be used to make your own correct turret from the Tamiya kit. These drawings show that the turret should be a few mm longer at the back and the front end should be more rounded. But the thing that caught my eye is that the commander hatchs should be more on the right side of the turret. The reason I am asking is because (amongst many other things) I want to improve the awful Panzershop T-72M4CZ conversion kit(a complete joke)

REPLY & QUOTE
"We don't know anything about their race, history, or culture, but one thing's for sure. They stand for everything we stand against."

REPLY & QUOTE
ninjrk (Matt Flegal) said
My question is how you would model one of the first T-72's from the '73-'75 timeframe? A lot of the conversions seem based around later variants. I suppose trumpeter might rescue me eventally.

REPLY & QUOTE
Jacques (Jacques Duquette ) said
IF you could get ahold of a Miniarm T-72 Ural turret, that would be a start. But realistically, waiting for Trumpeter while you build all the other variants you can is probably the best idea.

REPLY & QUOTE
Littorio (Luciano Satornetti) said
Guy's a bit of help for a newbie to Russian armour, I have the old Dragon T-72M2 is this kit any good and/or correct or does it require work?

Can I make a Russian tank from either of the above?

REPLY & QUOTE
DerGeist (Erik) said
The Dragon kit will require a new turret, glacias plate, tracks, gun barrel to be accurate and look nice. I'm not familiar with the SBS turret, it doesn't make much sense to label it as an A and M turret since the turrets are different shapes. If you want to do a Russian tank you'll need a new glacias plate for the Tamiya kit.

Tamiya kit with the parts you have will require a new glacis for the T-72A or -A rebuild. Miniarm and SP Designs offer new glacis. This will give you a nice Russian T-72A.

Trumpeter kit 05564 T-72B m1990 is a VERY nice kit to make a Russian T-72 OOB that would need nothing else added. After building the above 2 models, then building this, you will have gone through the entire history of the T-72 model tanks.

REPLY & QUOTE
Littorio (Luciano Satornetti) said
Thank you for all the advice, I'll hunt down a new glacis and I'll look into the Trumpeter kit, although a T-80 is on the cards before another T-72.

what kind of t-72 is india using for their ajeya mk1 program (the one without the ERA blocks)? is it the M or M1 model?

REPLY & QUOTE
Vista85 (Dario Vistalli) said
As far as i know Ajeya was manufactured directly in India under license and was a domestic production of T-72M1, the export version of T-72A(additional armour on front hull plate, Dolly Parton turret)
Before them India purchased some T-72 Ural late model(with closed optical rangefinder visor on the right and TPD-K1 laser rangefinder on the left on the turret) and some T-72G,the export version of T-72M(only laser rangefinder,no hull additional armour,early style turret).
A lot of these vehicle received Tucha smoke discharger system and T-72M1 style side skirt.

REPLY & QUOTE
quetch (matthew) said
Can you get the wire mesh armour or standoff armour 1/35 t-72. 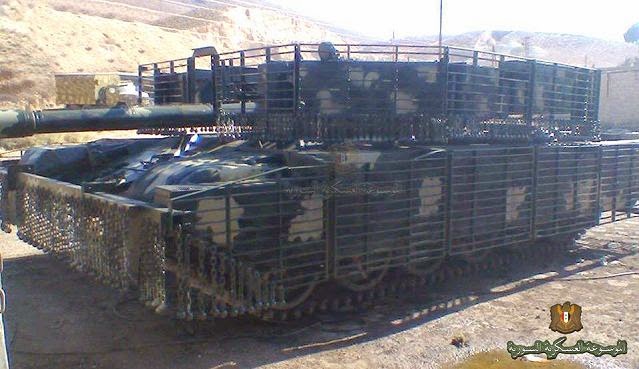 REPLY & QUOTE
Jacques (Jacques Duquette ) said
Not exactly. There are PE sets that you could use to make the "bar" armor, but you would probably be better off making it yourself from strip styrene. The ball/chain armor would be the same...look for Israeli pieces.

But there is no one, all inclusive, set for what you want.

REPLY & QUOTE
gvassilikoudis (giorgos vassilikoudis) said
Hello
I would like to make a Syrian T 72AV with era blocks.I would like to ask you if i can use the Trumbeter T 72b kit and what aftermarket turret can i take for that type of tank.
Thank you!

You have to change the turret, the iraqui tanks are T-72M1 and the tamiya kit is a rare version with T-72M1 hull and T-72M turret of the DR army so the problem is not the glacis but the turret

SBS has produced a nice aftermarket turret for the T-72M. It comes with decals for a tank in Iraqi service.
http://umm-usa.com/onlinestore/product_info.php?manufacturers_id=103&products_id=5231


Can I use the SBS turret #35003 ("T-72M early turret for Tamiya kit") plus a hull from Tamiya to make an Iraqui version?
Is this combo correct to depict an Iraqui tank?

REPLY & QUOTE
seanmcandrews (sean mcandrews) said
Hi Pato,
you'd need to get rid of the upper glacis applique somehow, either saw away & rebuild the kit or go with an aftermarket glacis such as this http://www.network54.com/Forum/47209/thread/1373902330/New+T-72+sets+from+SBS+Model. I'd think if you're going to be doing surgery anyway just cut the kit glacis out & rebuild.

I have opened the T-72B/B1 w/Kontakt 1 ERA today (Trumpeter No 5599) and was pleasantly surprised. It is more expensive than previous offerings but it may be worth the money.

Main thing - the turret was improved when compared to the previous T-90/T72B moldings (which were not the worst anyway) and comes quite close now to the best resin offerings (miniarm, SBS) and the real thing as well.
E
Second - individual ERA blocks are available and one can really build both the B and B1 and also the improved vehicles with the FCS sensor mast.

Third - both type of fenders included.

There is still some mess in the camo schemes (check your references) and versions and there are no UMSh tracks, which may be sometimes necessary for a specific vehicle. However Trumpeter received a better aid than ever before, IMHO this is the best OOB T-72 so far.

REPLY & QUOTE
RobinNilsson (Robin Nilsson) said
I have also opened Trumpeter 05599 and checked the instructions. The post above hints that options or in the instructions is something to do with an advanced sensor mast.
Since I know too little about all the variations of Soviet/Russian tanks

I need some help in deciphering the instructions

1. Which options should I choose for a T-72B vs a T-72B1 ?
I think there is a difference in the gunners sights but
which sight is which?
2. That sensor mast: Does the advanced one (the taller one ?)
belong to T-72B only or could it be used for both versions ??

I would like to build a Ukrainian vehicle so which options and markings would be reasonably correct ? I am mostly concerned about the technical details so getting the paint job and markings absolutely correct is a secondary priority ...

REPLY & QUOTE
canismalus (jbranca) said
I saw this post on missing-lynx where the poster states that the T-72B/B1 without the ERA blocks was very rare:

Nothing I have found in any of my sources corroborates this assertion. Does anyone know anything more about this?