Campaigns
Start or join a group build with fellow modelers.
Hosted by Engin Kayral
Through The Ages Campaign

REPLY & QUOTE
endrju007 (Andrzej Snigorski) said
Ladies and gentlemen of Historicus Forma!
Ive been thinking about this bigger operation for some time and I do believe that I have the general idea ready to be revealed to you.

This campaign that would require very serious approach from participants - dropping the project by participant who enlisted would destroy whole idea of this campaign.

As for timeline  I suggest to start as soon as we have 5-10 committed participants interested in this project. End line  well, depending on how many participants we may gather and how many eras are going to be covered  I think about at least a 6-12 months for this one counting from the moment we chose who is responsible for which era.

Here is up to date chart showing eras covered and awaiting their representation - please consider it while chosing your figure:

What do you think about this idea?

REPLY & QUOTE
611_sqd (Aaron Newlands) said
In my remaining stash I have a Wild West Undertaker and the Red Baron. I am happy to do either of them if they fit.

REPLY & QUOTE
Blade26 (George) said
I also have two figures in my stash that i started once but never finished. It's a figure from Leonidas from the 300 movie and a figure of Theodoros Kolokotronis of the Hellenic revolution in 1821. I can enlist with these two if u dont mind that i i allready painted o few basic colours on them ( the flesh and the cape of Leonidas)

REPLY & QUOTE
Magpie (Scott) said
I am certainly interested. I don't mind which era but I have had my eye on a Boudicea figure (in honour of my wife) for some time now.

I think I'd enjoy the exercise of looking a bit closer into that period of history.

REPLY & QUOTE
endrju007 (Andrzej Snigorski) said
Great to see that you are interested!

and post war eras, but I believe that XI XXIcentury doesnt need listing (it would also take to long

If anyone would like to join but his favorit era is already "taken" it is not a problem!

great idea, i would like to be in. It seems to be a long time campaign, no ? Especially if there isn't enough people for a one person/one era.

Can you define each era ?

I guess you ment more accurate than the distinction (as teached in french universities):
-Antiquity (from end of prehistory to Rome fall)
-Medieval (from Rome fall to Byzance fall)
-Modern (From Byzance fall to 1800)
-Contemporary(from 1800 to now).

you answered to me at the same time i was writting, so i get the responses i needed, many thanks Andrzej !

REPLY & QUOTE
endrju007 (Andrzej Snigorski) said
Nice to see you here Nico!
It seems we were editing our messages in the same time

Which era would you be interested in?
I'm afraid I won't be able to paint all the figures I have in the drawer during this campaing, so if you want to double any are covered by me feel free to do so (if you want to take any uncovered era under your wings it would be even better

the problem is that there're a lot of era which could be called as my favorites......so i think i will not enlist for those which are already "owned"; there are a lot which has not be chosen yet.

So, i really like late renneissance, the XVIIth century is the one of the 3 musketeers, Richelieu and sword men duels....a lot of beautiful clothings! I can't avoid this one ! Count me with something french.

I shall also do something with early middle ages, first capetians of the Xth century are OK.

And i have to stop here for now...if not i would sign for to much , unless the campaign would come along for....years !

).
I'd prefer not to ask you to paint more than 2 figures - the bigger the plans are the louder is the noise when they collapse

There is enough of us already to start this campaign in official manner, but I'd really would like to see more interest to avoid ending with 5 figures representing World History

I hope it gets more support!

I have Edward the Black Price in 54mm that needs an excuse to be built. I believe it would count as XIV Cent. (England)

Some other Non-WWII stuff I could contribute from my DML stash if needed:

My other ones are already built! But, I'll keep an eye on some of these categories at a model show this weekend.

REPLY & QUOTE
vonHengest (Jeremy Hengest) said
Hi Andrzej, it's great to see you putting this idea out there. I think it is a wonderful idea, and it may be worthy of a 14 month running time given it's purpose.

I had to step away from modelling for a little over a year due to life circumstances, but I have been able to make a slow return to the hobby and will continue to push forward. I am very interested in being a part of this, and I will commit to this one from the beginning.

I have a few figures of Vikings and Romans, but I am also very interested in Incan and Aztec subjects as well as the Bronze Age and Iron Age. I find bright colors very interesting, so I'm open to suggestions for ancient subjects.

I think it's a good idea to wait to start this campaign until you are able to fill out the chart to your wishes.

REPLY & QUOTE
endrju007 (Andrzej Snigorski) said
Steve  great to have you with us! Im very happy that you find this idea interesting. I added your figures to the chart (please let me know if I did it correctly).

Jeremy  good to see you back to the hobby! Ive added your suggestions to the chart with question marks  I dont know exactly what figures you want to paint so until you decide it stays this way, OK? Ive seen very nice Ramses II 70mm figure from Ares Mythilogic you may find interesting (they also have many other figures that scream for bright colors

). Let me know as soon as you choose something for you!

And yes  I do believe that this is a campaign that should last as long as it has to, so dont worry about timeline extensions  there probably will be many of them

I really like the figure of Ramses II you suggested:
70mm Ramses II
I deleted the picture - there is some problem with aresmythologic's website safety.
Andrzej

It's hard to find good Aztec, Incan, or Mayan figures. I did find one that looked pretty good but I have no knowledge of the company. Young Miniatures seems to be a Korean company, and there a some nice looking figures in their product line including this one:
1/10 Aztec Warrior bust 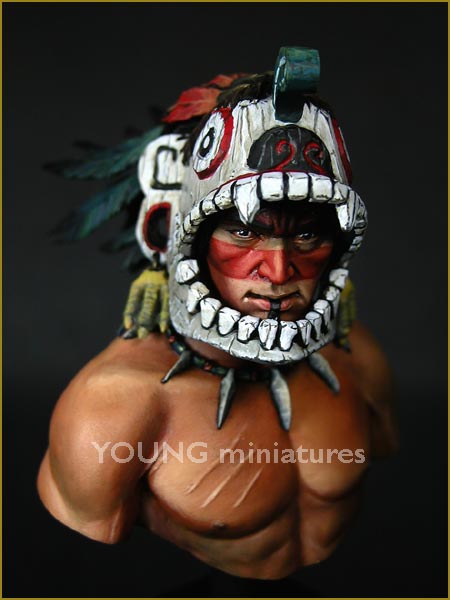 I'm undecided on a Iron Age subject for this campaign. I've looked through several Greek, Roman, and Celtic figures but still need time to think about it.
I found these to be interesting:
54mm The Scorpion

As for Vikings, I just need to pull one out of my stash.

I'm still open to other ideas.

REPLY & QUOTE
Magpie (Scott) said
You know guys the build logs of this campaign are going to make for a wealth of information.

Just looking at some of the proposed figures there are so many different elements of armour, leather, skin tones, hair , tartan etc.

We all is said and done it will be a great reference for noobs like me, really looking forward to it kicking off and I can start learning.

) and it seems that wed have very nice result already if only we would all build two figures each (Scott declared 1 and so it is counted) from figures youve mentioned above
So if you would agree on painting two figures we would have best result with:
Aaron  undertaker and Red Baron
George  Leonidas and Greek warrior from 1821
Scott  Boudicea
Nico  Xc Capetian and XVIIc French musketeer
Steve  Black Prince and Chinese Volunteer from Korea
Jeremy  Ramses II and one of his Vikings
Andrzej  WWII soldier, Crusader, and if time permits also Montezuma.

This way we would cover: Bronze and Iron Age, Middle Ages, Renaissance, Industrial Revolution, Machine Age and Post War Era. We would lack only of Information Era.

What do you think? Please confirm if you agree and if you do I suggest starting this campaign as soon as possible and give it ~12 months running time (for now  it may be prolonged if necessary).

that's OK for me too (Sculpting + Painting, probably at a 75 mm scale).

REPLY & QUOTE
Magpie (Scott) said
Sounds good to me, I guess I'd best do an Information Age figure as my second?

REPLY & QUOTE
Blade26 (George) said
it' ok with me also.I'm all set to start it. i also have an Achileas figure and i could make him also for the late brozne probably.the correct date of the battle of Troy is still a myth.so any era back there could suffice i think.

REPLY & QUOTE
endrju007 (Andrzej Snigorski) said
Campaign is approved. You all are welcome to enlist HERE

Well, it's going to be fun

REPLY & QUOTE
Blade26 (George) said
Hi there guys.
Ok here we are with the start of the figures i will make for the campaign.
Theodoros Kolokotronis was a generall of the Greek Army during the revolution against the Turks in 1821. Born in Tripoli of Arcadia.After the war was over the general was imprisoned by the Greek politicians (obviusly they were feared of him) with false accusations.He died in prison in the castle of Nayplio in Greece.
For modelling purpose now, the figure is from Athens Miniatures in 54mm. I glued him up leaving only the sword apart and primed him.painted a 1st hand the kilt with humbrol white and the flesh with oils. The second figure is Leonidas King of Sparta.You all know the story of the brave 300 in Thermopyles lead by their king to sacrifice their lives and win time for the rest of the greeks to rally against the persian invasion. The battle of Thermopyles took place in summer of 480bc and lasted 3 days untill Efialtes betrayed the Greek army and shown the secret path to the Persians.
For modelling now i used the Yedharo figure. There was no base for it so i made a fast clay base to put him up.
I used humbrol insignia red for the cape and oils for the flesh and humbrol bronze for the metal parts. this is olny a 1st hand painting and surely there will be more improvements later on.
Hope you all like it. REPLY & QUOTE
endrju007 (Andrzej Snigorski) said
This is going to be my first figure for this campaign (54mm Andrea Miniatures):

I still have no idea which figure to pick for WWII... we'll see.

REPLY & QUOTE
vonHengest (Jeremy Hengest) said
That is a very cool figure, I should have picked that for the Crusades campaign since it isn't covered in white