Yes that's fine, its military kit in civilian use so its all good

PHOTOS
Bluestab (Alex) said
Okay. I went ahead and started breaking down the Maxi Ambulance. Unlike the other Humvee, this one broke down without any real issues.

I may start on the drone in the next few days. I'm still thinking through how I want to layout the control area. The wheel humps are complicating things.

PHOTOS
Bluestab (Alex) said
Update. I started work on the control vehicle's work area. I cut away the front sections of the sides. That should provide the workspace for the control panel, operator, and various electronicky things and still allow the doorway between the front and rear.

Mocked up using a seated German Soldier. In hindsight, I probably should have not cut the right hand side. I think I might build a box there for a generator.

That's it for now. I'm sort of jumping on this one as I go.

PHOTOS
Bluestab (Alex) said
Update. I decided to break styrene on the UAV. I figure getting some work done on it will motivate me.

And that's it for now. It really looks like a weekend project, so I should wrap up assembly tonight. I might even try to paint it tonight.

As an aside, I'll probably build a trailer for the drone to be carried in. I'm guessing the drone breaks down for storage. I figure the trailer (and control Humvee) probably would not be marked. Don't want to tip off people.

PHOTOS
Bluestab (Alex) said
I had to rig up a jig for the drone's tail booms. They were pretty loose and were pretty crooked. I was able to glue them in place, using the edges of the wing flaps, and set them aside to set up properly.

With that drying, I turned my attentions to the kit's figures. They are pretty crude and rough looking. The torsos are split in half (front & back), which gave me a Heller flashback. They required a lot of clean-up and the fit is pretty bad. The heads are terrible and will be replaced. I'm debating on using them or just tossing them.

And here's the drone basically assembled. The landing gear is pretty fragile so I have it propped up, for now.

I still have to paint the engine and the drone. The drone will need some cosmetic touches on seams and such. I'll probably try to get some paint on it this week and then cycle in to the trailer and control truck.

The kit goes together quick. I am a little disappointed at the crude nature of the figures and the rough edges of the kit. It's a neat subject that will require a little work and patience to be a great addition to the display case.

PHOTOS
JScicluna (James) said
This is my submission for the campaign.

I will be modelling a police tactical SPV as used by Australian Police Tactical Groups.

I will be using a Tamiya 1/32 Toyota Landcruiser which I will modify.

I have started on the standoffs

PHOTOS
Bluestab (Alex) said
James,
It looks like you have the makings of a nice project.


Update on the control vehicle.

I started work on the interior of the control Humvee. I filled in the front areas where I cut away the ambulance bed.

I thought I had an extra set of floor inserts, but I can't find them. I grabbed some scrap styrene and cut out a section to cover the rear floorboards. I propped up the sidewall and bulkhead just to get an idea of the way it should look.

To cover the floor (as well as the lack of bed detail) I used a rubber floor mat. To make it, I used sections of liners from a pack of cigarettes and painted them black. I've used this before for floor mats and stuff like that. I don't smoke anymore, so I don't know if the company still uses the fine waffle patter textured liners. I've got a stack of them put away.
Anyway, I didn't cover the whole replaced floor area with the matting. I had added access hatches to the outside side panels to represent added storage. On the drone controller's spot behind the driver, I added a box to represent a control box that is accessible from outside. Maybe to hook in a remote monitor for a briefing. For the spot behind the passenger side I'm going to go with a larger box, maybe a generator or just storage.

Anyway, that's it for now. I'm just sort of working on this one in between other projects. I want to get some progress done on this and a couple of others before the end of the month.

PHOTOS
Trisaw (Peter Ong) said
Here is my entry. I plan to make a small FBI Command or Communications truck. Click on the image for a larger photo, but there's not much to see at the moment since I just got started.

Hope to start this week

PHOTOS
Bluestab (Alex) said
I managed to get some work done on this one yesterday.

I added some storage to the rear of the Humvee. Those are storage boxes from an old Tamiya Hanomag that I had in the spares. I left the positioning holes uncovered because I plan on add some light-fixtures there. I painted the interior of the cargo area a light gray.

I started getting some of the control panel together. I worked up a printed sheet of various maps, Windows screens, etc. We'll see how those go.

I've decided against adding a trailer to haul the drone. The drone doesn't weigh but a couple hundred pounds. And even for a trailer, you'd have to break it down. After some thought, the Humvee rear should be able to hold a drone broken down to its basic parts (wings, body, prop removed, tail).

And I think they'll be using the drone to hunt for marijuana grow fields. Even though it's not being used, I'll leave the firetruck up until after the campaign ends. No sense in a page full of broken image links.

And its off to get some primer

PHOTOS
ltb073 (Sal) said
got some paint on the little guy

a lot more to go

PHOTOS
ltb073 (Sal) said
Ok Im calling this 1 finished, I never seen a dirty fire truck other than the ones that were pulled out of the World Trade Center

So no weathering on my Fire Hummer

Who wants SWAT / Sheriff decals for the Maxxpro kit? I have been contacted by Kinetic to consider these options. Already dug up some info and details on the badges to start a few... but I gotta to know if the demand is good, as the badges are a killer to produce. I have got a blue one, black, brown/black from different counties, including a few shown here. You know me, if I am going to do it, it will be for the whole 9 yards...

A show of hands please. 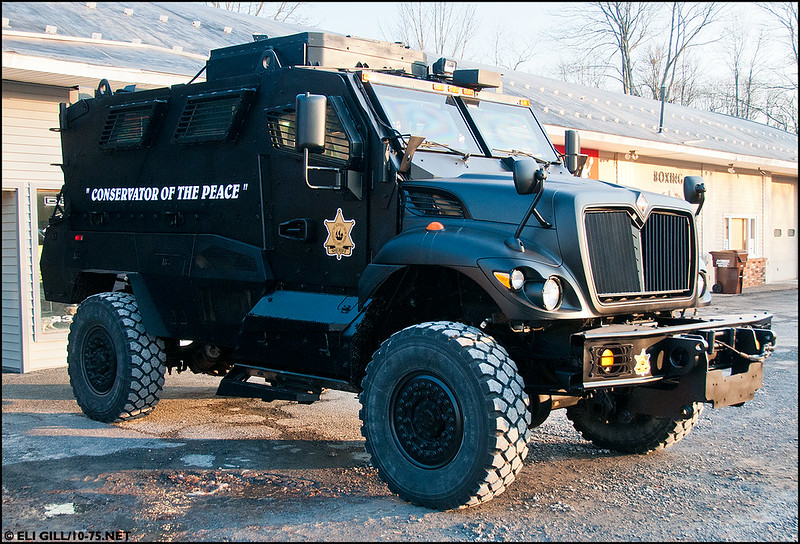 PHOTOS
Trisaw (Peter Ong) said
I started and doubt I can finish by July so I'm thinking of withdrawing from this campaign.

PHOTOS
ltb073 (Sal) said
I just checked the gallery for this campaign, am I the only one to finish here

PHOTOS
Bluestab (Alex) said
Sal, my Mack pumper doesn't qualify on its own. I was going to use it as part of a larger scene including a Humvee based bomb squad vehicle...which later became a humvee based drone control vehicle. I never could get all the pieces I needed to make the bomb squad vehicle.

I kind of just sputtered out on the drone vehicle. I never really could get started back on it and finish the drone control truck. I could probably enter the drone but I don't feel the work is there to deserve a ribbon. The drone kit is basically an afternoon build anyway.

I probably will box up what I have and repurpose them in to something else later. Maybe pick up a M557 and scratch a control interior. And I can always use the Humvee for something.

PHOTOS
Trisaw (Peter Ong) said
I withdrew, sorry. Perhaps if the deadline was at the end of the year I would have finished, but since it's July, there's no way I could finish my conversion.

I hope this doesn't detract from future EMS campaigns as I really liked the topic, just that I was building other kits during that time.

PHOTOS
Bluestab (Alex) said
John,
You awarded me a ribbon when I did not finish. The fire truck doesn't qualify and neither the Humvee nor the Drone were actually done. Can you un-reward me?

John,
You awarded me a ribbon when I did not finish. The fire truck doesn't qualify and neither the Humvee nor the Drone were actually done. Can you un-reward me?