PHOTOS
mmeier (MBR) said
Devious lil things those Tamiya kits. One moment they are parts, the next they are done

That kit is a classic. Builds nicely

Devious lil things those Tamiya kits. One moment they are parts, the next they are done

That kit is a classic. Builds nicely

This Is the acadamy kit, but no idea how different it is to the Tamiya offering.

PHOTOS
Lonewolf7usa (MSCorley) said
Well gentlemen, Here is my part of this campaign. The Academy M-50 Ontos. I have included pics of what I have started as well. Again all comments welcome!!!!

PHOTOS
Bluestab (Alex) said
Lonewolf,
Cool. You're doing an interior for it. I'm trying to dig up a closeup picture of the mount they used to hold the turret spotlight. However, I've done some work on mine. I've got the suspension done and mounted to the hull. I went ahead and assembled the upper hull and and jumped ahead and attached it to the hull.

Finally I am able to get on the computer long enough to post some pictures for this campaign. Here is my start photo from September 15 and some of the stuff I will be using. I am not too sure how this project will turn out since I have yet to complete a project the way that I had planned. My overall plan is to have a M151A1 from the S3 section of the 2d Battalion 47th Infantry (Mechanized) of the 9th Infantry Division be placed in a diorama of a planning meeting alongside of a M113 and a M151A1 Searchlight vehicle of H Battery of the 29th FA or of this vehicle and the Searchlight vehicle in front of the sign going into BearCat. Which way I go pretty much depends on what I come up with for figures to add to this scene.

I have been doing some work since the start up picture was taken.

I primed the vehicle with flat black spray paint, then did a base coat of Vallejo US Olive Drab followed by drybrushing of the base color with Sunny Skin Tone added. I then sprayed a few coats of gloss coat so I could apply dry transfers of the stars, bumper numbers, and registration numbers. They may not be the straightest, but based on how the bumper numbers on our vehicles looked when I was in Iraq and Afghanistan as well as during peacetime, it shouldn't be much of a problem. When I was applying the dry transfers, I broke off the mirror, so I will have to glue it back on later. I still need to lightly weather the vehicle as it does not need to be roughed up like a M113 that has actually been through some fighting, install the seats and radio equipment, and finish the lights. Oh yeah, need to put the wheels on.

WWW
oldjoker (Alex Ulyanischev) said
Hi, guys! I make a vignette on evacuation wounded in Hue.
Use 2 pieces Hobby fan, one thing Bravo 6 and 1 Dragon. Every head was replaced with a Hornet. Mule finalized photoetching Eduard. 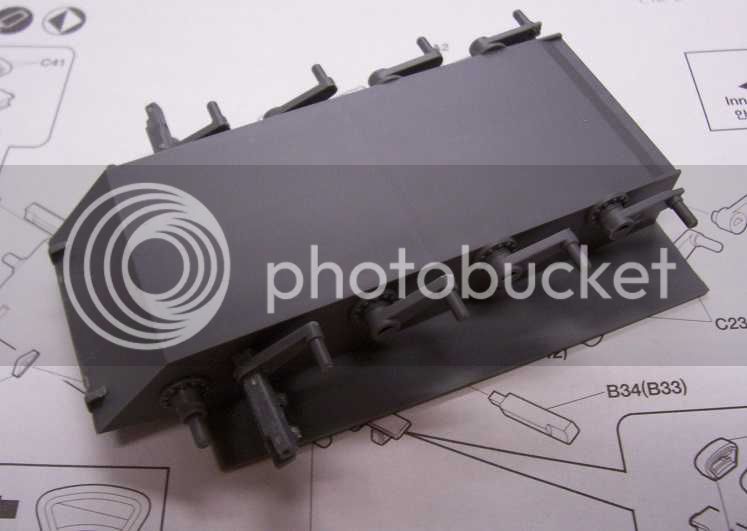 Upper hull assembled and attacked to the lower hull. The instruction have tis happening later. I went ahead and attached them before I started adding the hull details.

I added some of the upper hull details. I also messed up on the spare track bracket. I ended up breaking one while removing it. It shouldn't be hard to fix though. I also started the exhaust.

And that's it for now.

WWW
Tojo72 (Anthony) said
You folks are off to a nice start.It will be sometime before I can jump in,keep up the good work !!

PHOTOS
Lonewolf7usa (MSCorley) said
Well folks, here is what has been done so far on my Ontos! I have more done but no pics right now. I will update again later. Again all comments welcome!!

PHOTOS
noddy927 (Peter Sutherland-Findler) said
Nice scratch building on the interior Lonewolf. Not even thought what I will do yet.

PHOTOS
vonHengest (Jeremy Hengest) said
It's really great to see such dedicated work on some of the other kits here, and the Ontos is really just something else

PHOTOS
mmeier (MBR) said
Basic work is mostly done, paint needs some touches. Not yet sure how to mount/present it but likely not on the stand.

WWW
Tojo72 (Anthony) said
I won't be starting till next year,but here is my entry

PHOTOS
tinbanger (Richard Tonge) said
Hi!
This will be my entry:-

PHOTOS
Bluestab (Alex) said
I'm putting this one on the back-burner until after the holidays. I figured I'd go ahead and post what progress I have done.

Rear of the Ontos.

Exhaust side. The exhaust worried me a bit but really ended up going together fairly easy.

Rifle mount...alone and sitting atop the Ontos.

Recoilless rifle time. I had built the RR for the Academy M113 so I really hadn't expected these to be that bad. Boy, was I wrong. Lots of little pieces. Instructions and pictures contradictory at times. For example, some of the instructions pictures show the guns mirroring each side whereas the instructions want you to do all six guns identical (except for the two lower assemblies).

Anyway, that's where I am at right now. I'll start back up with it after the Holidays.

No worries about the holidays guys, I'm sure most of us will be plenty busy, and may even find a few new entry possibilities in the not too distant future

MBR: A small wooden base with two brass pegs would look pretty good. I'm not a big fan of the plastic base either.

PHOTOS
treadstone (Juan Marmol) said
Hello there, is it to late to join in on this campaign? This is something new for me and I really could use the motivation, and I have a Huey in my stash that is begging to be built.

I started my entry for thsi campaign. This a Bravo 6 figure depicting a French para just before embarking for Dien Bien Phu.
This figure is a bit special for me as my friend Vladi asked me to translate the title of the figure : un mauvais pressentiment.

On this figure, for the first time I used the technique of black priming. I opted for this technique as the figure presents a lot of belts for the TAP 660 parachute. It will save some difficult black underlinings all over the figure.

Here is the picture. I should make progress on him this week end, and I'll try to take many in progress pictures. 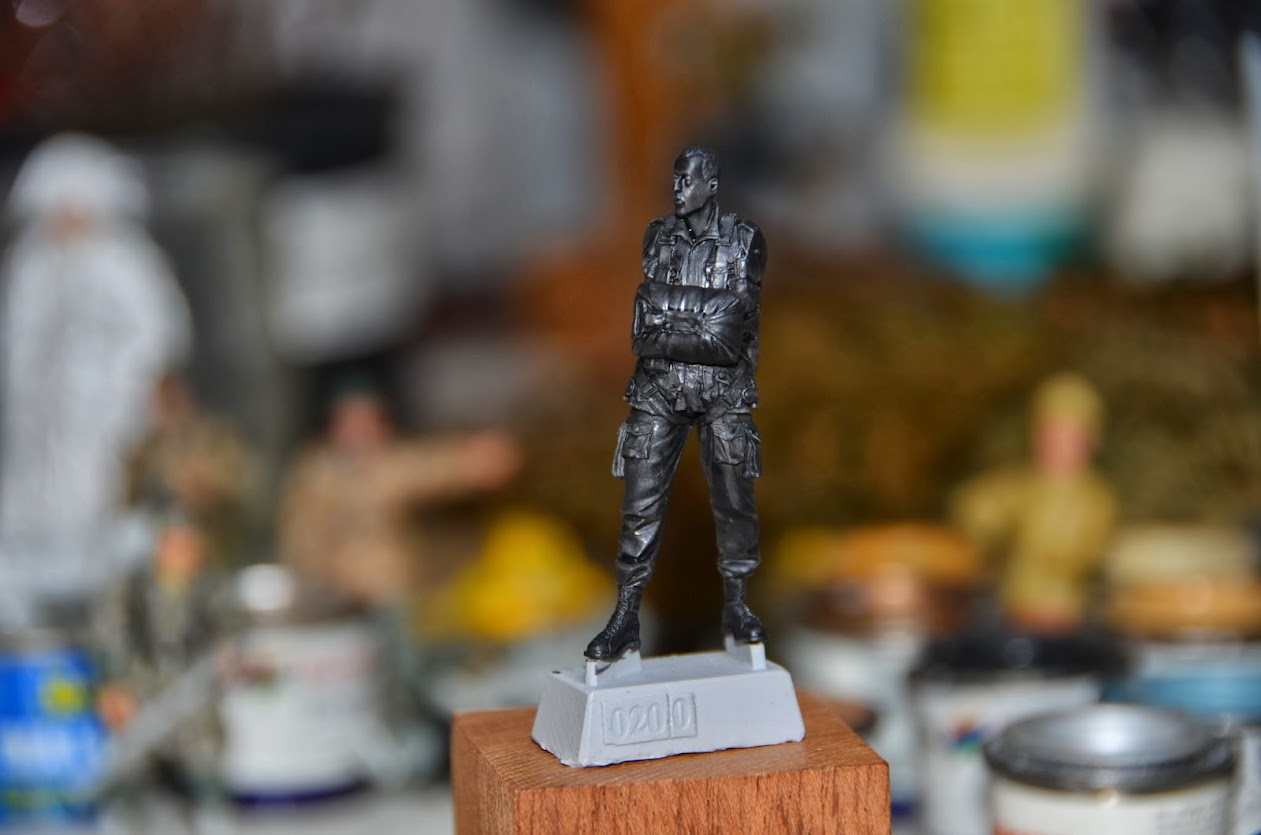 PHOTOS
noddy927 (Peter Sutherland-Findler) said
MBR: I think it would look best moored up on a river with 5 or 6 special forces dudes chilling out with large wooded area in the background lol Go for it buddy.

Hello there, is it to late to join in on this campaign? This is something new for me and I really could use the motivation, and I have a Huey in my stash that is begging to be built.

Not at all, this campaign is still in it's infancy

Everyones' projects look pretty darn good. It is motivating to see the work other people are doing.

I had to put the M151A1 on the back burner for a while after getting the radio and antennas wired in due to working on items for a concept model of what the new Air Defense Artillery will look like once it gets built and my first commissioned figure being due for presentation in a very short period of time.

This past month I got commissioned to do a figure to be presented to an organization that sponsored some fishing trips for the Soldiers at Fort Sill's Warrior Transition Unit. Since the organization was comprised of primarily Vietnam Veterans, I was asked to make something that had to do with Vietnam and fishing. I was originally going to sculpt a figure fishing from a river bank, but due to the deadline I had to meet I had to go with a production figure so I could meet the deadline of the presentation date. Since I had recently received several figures from Bravo 6 in the mail, I found one that seemed almost perfect for what I wanted to depict. The body of the figure is from the Jerry Cans kit from Bravo 6. The Left arm is from the Dog Handler, the right arm is from the assistant gunner from the Greedy Pig kit. The head is a Hornet head. The figures are from Mantis Miniatures. The fishing pole is fashioned from styrene rod, a turn signal from a M151A1, other pieces of plastic, and brass wire.

The groundwork is terra cota Miliput with various dried and paper plants. The water was achieved by painting a part of the wooden base and then applying several layers of gloss coat.

I think it turned out quite well for a quickly done project. It really helped that Bravo 6 figures are so well sculpted and posed.

In a way I kind of did not want to give the figure up because I was pleased with the outcome and thought it would be a nice display piece for some upcoming figure shows, but I guess I can always make another one. I was going through my stash and found quite a few kits suitable for this little party!
Academy 1/35 M-113
Academy 1/35 Ontos.. but someone else is already doing one of these..
AFV Club 1/35 Centurion Mk.V of the Australian Armoured Corp
That was all the targets I could find

Then to the aircraft..
1/72 Heller EC-121 Warning Star
1/72 Revell B-26 Invader
etc etc
There were about 20 or so all up. Well I thought there were but I had mistaken the PLAAF markings for North Vietnamese markings.. DOH!!

So it is down to the Warning Star and the Invader and the first one I will build is this one..

Yes, Heller's much maligned EC-121 Warning Star, maligned so much I think so certain companies can sell resin correction sets..

And I can't justify $45 for the set anyway.
I have had this kit since it first came out and it has followed me all over Australia. I test fitted the two fuselage halves expecting the worst from such a large. old moulding, but I shouldn't have worried as even though one side is slightly warped a little pressure bought it all back into line and I don't even think it will need any putty! Pretty good for a kit that just celebrated its 30th birthday in my hands!
Something has decided to dissolve itself in the corner of the box, don't ask me what..

I hope it wasn't anything important..

It appears I did a bit of checking many moons ago as well as the cowlings have the remains of masking tape on them..

SHOULD come off with a little encouragement.
Lasstly, the decals have seen better days so I will be on the lookout for white 'NAVY' decals in the stash. If that fails has anyone got any suggestions as to where to get decals for this beasty?
Cheers for now
Warren

You may be right, I may be crazy.

Well actually it waits for some LRRP guys to evacuate but the Amazon delivery drohne stumbled over some Charlie AAA...