REPLY & QUOTE
AJLaFleche (Al LaFleche) said
Here is the United Empires Miniatures 1/10 bust of the Seneca war chief Kaintwakon ( Cornplanter or By What One Plants) and by his given name John Abeel, Jr., as sculpted by Carl Reid. Kaintwkon was the son of a white father and a Seneca woman, and given the matriarchal lineage of the Senecas, was considered a member of the tribe. He lived from about 1750 to 1836 He fought with the British in both the French and Indian (Seven Years) War and in the American Revolution. In later life he maintained contact with the Quakers but became disillusioned with the treatment of his people by the Americans.

The bust is based on a painting done in 1796 by Frederic Bartoli. Various reprinting show different shades to the clothing and feathers. 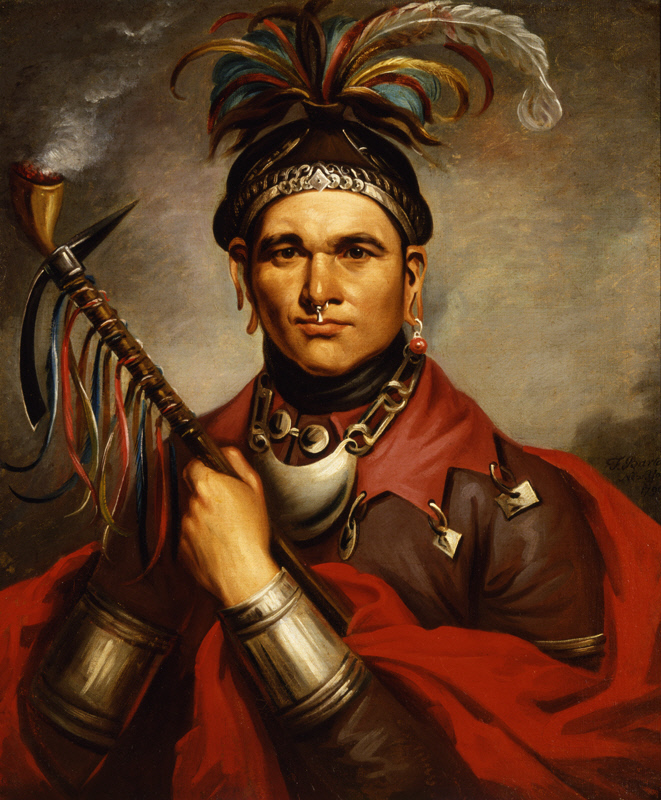 The bust is painted in Vallejo and other acrylics with ModelMaster Aluminum Buffing Metalizer in the silver jewelry and presented on a base from Birch Tree Enterprises of Long Island.

REPLY & QUOTE
Wings & Wheels Modelers-IPMS
"Whatever your hands find to do
You must do with all your heart."
From "Through Your Hands" by John Hiatt

REPLY & QUOTE
TAFFY3 (Al Bubnis) said
Very Nice, Al. I think this is your best work yet. I love the subtlety of the shading on the flesh tones. Great piece.

REPLY & QUOTE
PeeDee (Paul Dobson) said
How nice to see a bust painted where it is naturalistic.
Far too often I see wonderful work by painters, but the shadows and highlights are far too extreme and 'forced'.
Carl Reid's work is in a league of his own, and you have done a superb job of it.
This is lovely,
Thanks for sharing.
Pa

REPLY & QUOTE
It's not wether the glass is half full or half empty that counts, what's important is who should already be ordering the next round.