Campaigns: Completed Campaigns
Campaigns that are completed should be grouped here.
Hosted by Richard S.
20 Bucks for the win

Congrats to all those that finished

REPLY & QUOTE
SGTJKJ (Jesper) said
Thanks for a great campaign. It was fun!

See you all in the next one

REPLY & QUOTE
phantom_phanatic309 (Stephen Willdig) said
Some great models completed and proof you don't need to throw vast sums of cash at a kit to make something good.

Afraid I wasn't able to complete my Jeep but I am continuing on with it. I will post some pics when it's done. 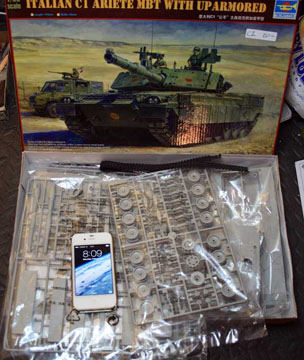 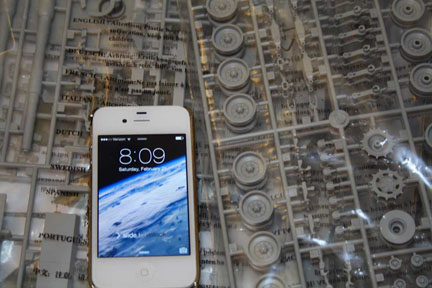 I've been taking a close look at this model and it looks like a great little kit! Only the two part barrel will need careful attention. The supplied brass wire might be too thick for the tow cables. I know - big deal right? The clear film for the 'scopes might be tricky. Has anyone had experience with that? I'm assuming right now that I will be painting the inside of the scopes black and put this film in the front. Kinda did the same thing on an Italeri Panther once. As far as I can tell right now it looks accurate, so this will probably be an OOB build - not so entertaining I know but there you go! (Might be best for a first campaign vehicle build.) Will have fun with dust and weathering though. Now I just need to clear some stuff out the way so I can start! Might be a while I'm afraid...

--
OK time to post an update on the Ariete C1 Up-armored.

Unfortunately I hit a problem right away! The wheels are loose. I do NOT want a tank with wobbly wheels, so I did two things. I added putty to the shafts and put a plastic card disc in between the wheels halves. Then I drilled new holes. Hopefully the picture will make it more clear. 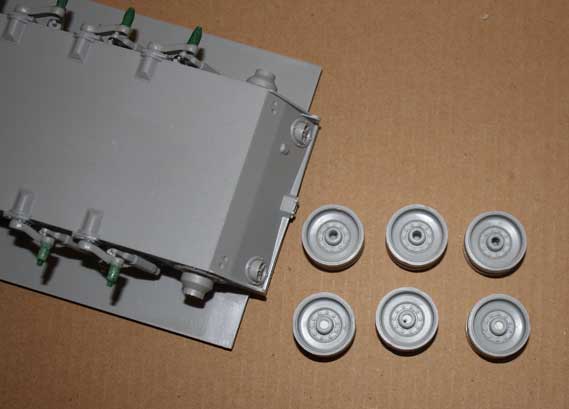 The problem comes because there is not solid plastic inside the wheels, so the axle shafts do not have a firm attachment. Hopefully my fixes will cure the problem.

C1 Ariete update: I have to say my fixes worked out just great! I was able to get the road wheels so snug on the axles that liquid cement was all that I needed. I was sure that tube cement would be necessary. (Well yes, a little trimming and sanding was performed to get the custom snug fit!)

The tracks - well plastic cement did NOT work here, despite what Trumpeter tell you, and I went old-school and used staples - the top of the track will be well hidden under the up-armor kit I think. The tracks look a little loose in the picture above, but on a surface look fine, so I left well alone.

So there is the initial painting on the running gear. Much will be hidden, so final paint will be left to after construction! 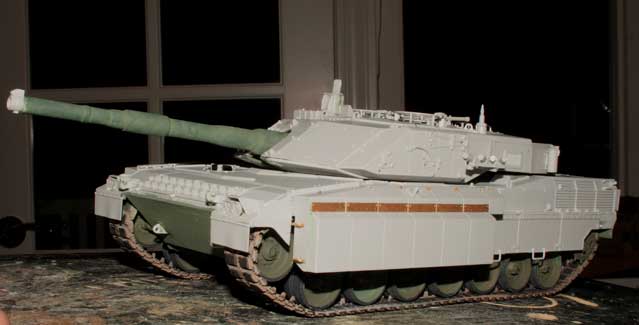 The tow cables are rather nice. I must take a picture!

Got some paint on this baby. Just about ready for 'weathering', which in this case is going to be mainly dust, dust and more dust!

Comments:
This is one good looking piece of armor!
'Photofilm' was provided for the vision blocks in the turret. Basically just flat clear film that you were supposed to cut to fit. Couldn't make it work for Ended up just using gloss black in the 'holes'. Not great but then it's not too visible either.
There are some delicate rear-view mirrors which I will put on LAST! Otherwise I will be sure to break them off. Usually I try to use wire to replace the rods, but these are not just straight rods so I was foiled! I already broke the gun lock on the rear and lost it. Not sure what to do about that yet!
Question. Anyone have anything good for mirrors? I've used foil which is better than silver paint, but not totally convincing.
I left off most of the tools for painting separately and then found out that most were painted same color as the body. DOH!
Wasn't happy with the coverage or color of the airbrushed Tamiya acrylic, so repainted by brush in Humbrol enamael. Sounds weird but I end up doing that quite often. It's warm in these parts so the Tamiya dries really flat and makes a great surface for relaxing brush painting! Anyone else do that? Also I use a magnifying lamp for brushing, so it's a lot easier for me to see what I'm doing. Airbrushing is out in the garage due to noisy compressor and paint spray. 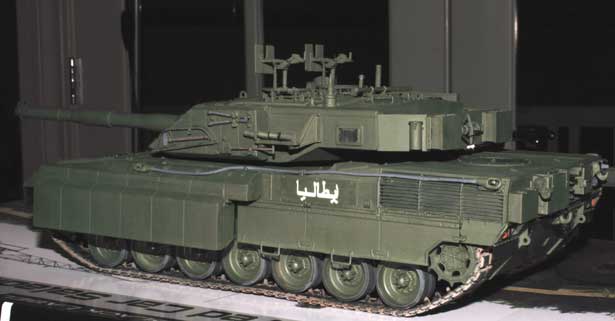 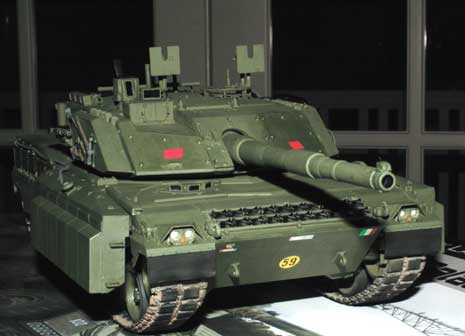 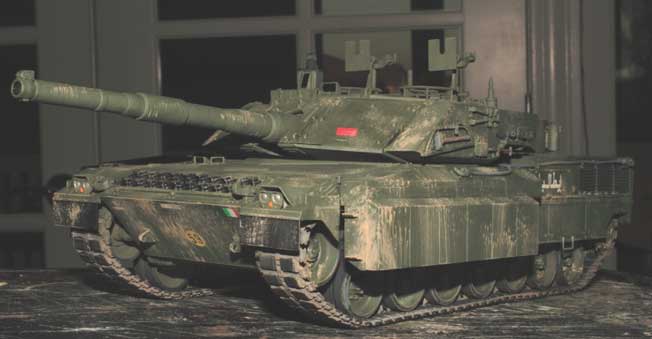 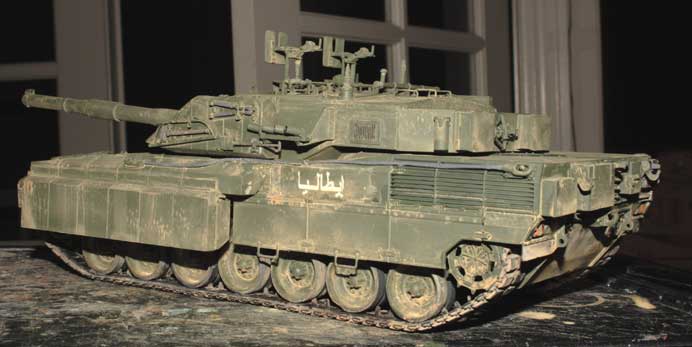 --
See the white-ish area and 'tide-marks'? That's what I'm talking about. 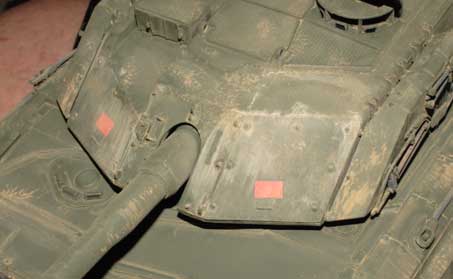 My attempt to hide it. I will do another filter to see if that will blend everything together. 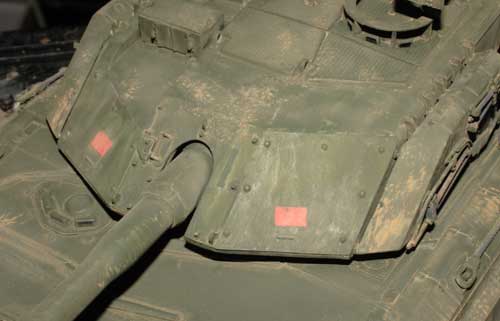 Re-applied filter and then dust. Axed the side mirrors as not often fitted (and looked dumb anyway :-) ). 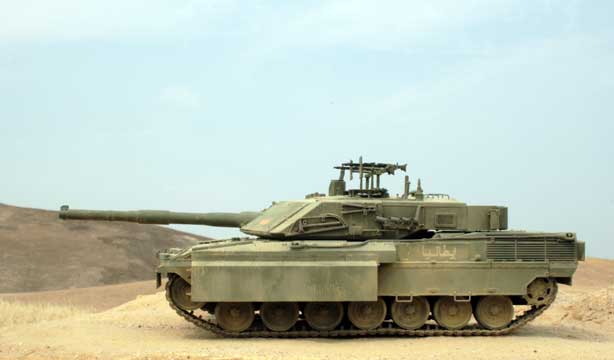 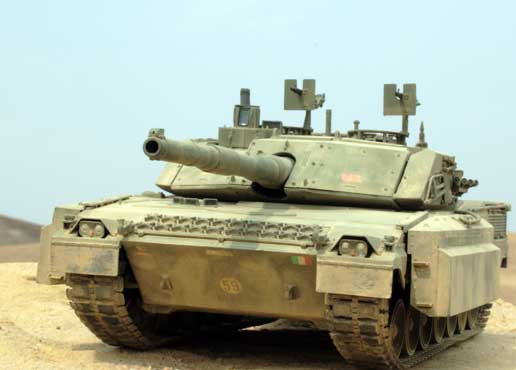 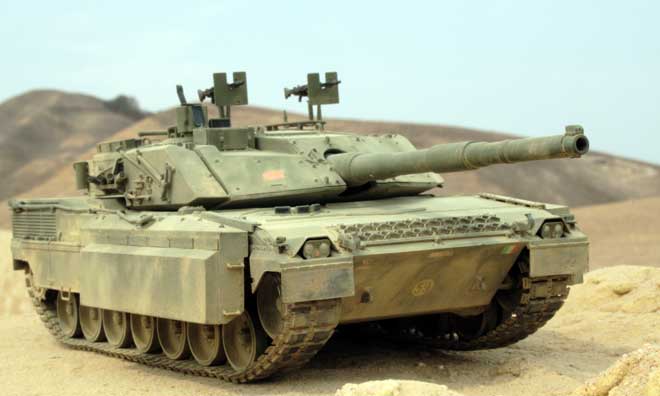 I reckon I'm calling her 'done'. 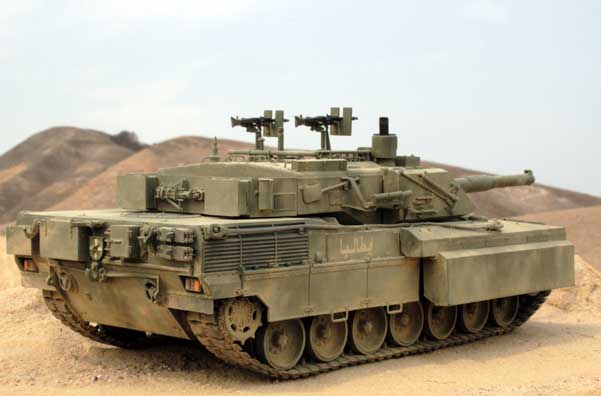 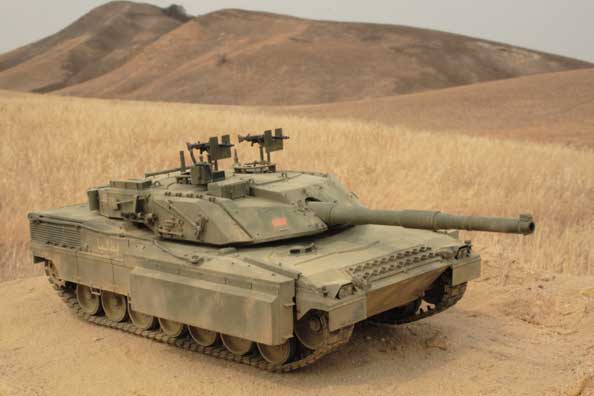 Overhead shot if I must. 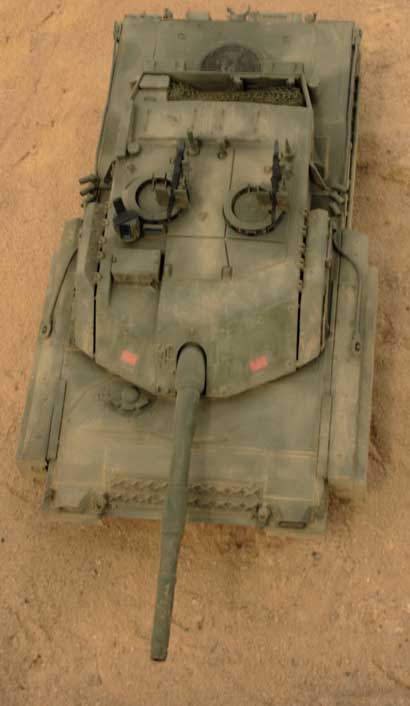