Cold War (1950-1974)
Discuss the aircraft modeling subjects during the Cold War period.
Hosted by Tim Hatton
Twins - or how to fill an airfield

REPLY & QUOTE
JClapp (Jonathan) said
I work in 1/144 scale, because my goal in model building is to populate an airfield layout I am building of a specific place and time, the same way model railroaders build a layout and populate it with trains to represent a specific place and time. More on that elsewhere perhaps, later. My project requires dozens of aircraft models.

Today, I opened a whole lot of project boxes to see the current state of affairs.
completed-

currently in the queue -

in gray, ready for paint-

REPLY & QUOTE
Joel_W (Joel Willstein) said
Jonathan,
Holy Smokes!! You've got quite a stable of works in progress. I particularly like the two early PBY's. Are they 2, 3, or 4 variants?

REPLY & QUOTE
Jessie_C (Is a secret) said
Judging by the fact that they're amphibians, It's more likely that they're -5As with the blisters removed. That was a very common conversion post war.

Judging by the fact that they're amphibians, It's more likely that they're -5As with the blisters removed. That was a very common conversion post war.

that's right . The Minicraft kit claims to be a -5A, and I have converted them to look like these Transocean Airline planes

They are my entry in the Seaplane campaign.

REPLY & QUOTE
tinbanger (Richard Tonge) said
Nice collection Jonathan!
One day they will name an airfield after you ( maybe just on Aeroscale!

REPLY & QUOTE
JClapp (Jonathan) said
I have finished the pair of Army C-54s. Minicraft 1/144 kits, I designed and printed all the decals.

Three of these were stationed on Kwajalein in the Pacific Missile Range from 1966 to 1977. They flew daily commuter traffic between Kwajalein and Roi-Naumur, up to 10 turns each day. They are a key element of my Aircraft of Kwajalein project.

"228" went on to work for a fire fighting service. "650" was written off after overrunning the runway on RoiNamur.

All three are visible in this photo of the ramp on Kwajalein. 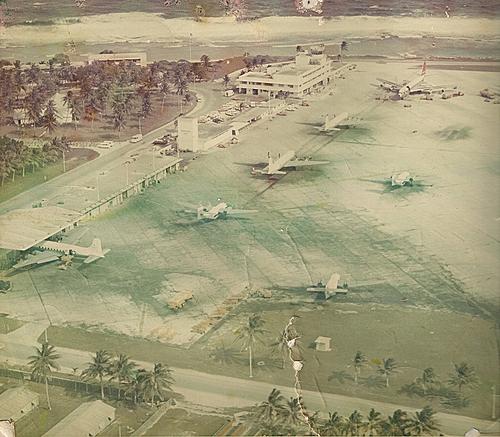 REPLY & QUOTE
Joel_W (Joel Willstein) said
Jonathan,
Impressive doesn't do your buddy builds justice. The two Cats and two Albatrosses are my favorites. But the C-54s are right up there for the number 3 spot.
Joel

REPLY & QUOTE
JClapp (Jonathan) said
Hey Joel, thanks for looking in, and for your kind comments.
I lack the skill level of execution that you and others here demonstrate - two foot rule on everything - but I like to think I make up for that in other ways.

The Cats are my favorite so far as well, because I was able to study many photos of post war conversions, and I'm confident that the bashing Ive done on these kits has produced a good representation of the prototypes. Not to go too far in that direction though, the names I chose, TALOA GUAM, and TALOA MAJURO, are not supported by photographic evidence, and the several extant records disagree, but they suit my interests.

I made the Albatrosses as faithful to photographic evidence as I could make them , but already, more recent discoveries have revealed some errors, though I have no intention of going back. Also, I have enough information now of two more versions I will need to make, so another pair of Albatrosses is in the queue already.

The C-54s are very well documented, and I am very pleased with the decal set. Nonetheless, I can see errors in the finished models, modifications that is, that should have been done to the Minicraft kit before decorating.

! I've just decided AGAINST twin-builds for myself in the future but you seem to really have gotten the production line going!

REPLY & QUOTE
Press banner to the right for my current build!

REPLY & QUOTE
Joel_W (Joel Willstein) said
Jonathan,
As I posted in the campaign thread, your twin build 707s really came out quite well.

REPLY & QUOTE
JClapp (Jonathan) said
Thanks Joel. I must say the Two Six decals were wonderful to work with and fit the model perfectly.

Hi Magnus, thanks for stopping by. This is a big project with a plan, and I am pleased with the progress. Also it really is putting a dent in the stash, because for some reason when I decide to buy a kit, I almost always end up with two or three!

For my next round of campaign entries, I am going to advance to pairs of twins.

REPLY & QUOTE
JClapp (Jonathan) said
This pair of DC-6's brings me up to date.
The Air Micronesia decal is from TwoSix and the World Airways is from F-DCAL. both very nice products to work with.

My entries in several campaigns in the coming months will be more pairs of twins. Ill have a line up ready to show soon.

REPLY & QUOTE
Jessie_C (Is a secret) said
Is that a Welsh Dak slumming with your DC-8?

The DC-8 is sort of interesting, it's a vintage 1975 Lodela/Revell kit.

REPLY & QUOTE
JClapp (Jonathan) said
I did build a Welsh C-47 a while ago, Im pleased to pose these together. Army - Welsh models vacuform, Navy - Minicraft

REPLY & QUOTE
JClapp (Jonathan) said
Just finished, a pair of Minicraft B377s. one a KC-97L as seen at Westover AFB in the early 60s; and a Northwest Stratocruiser with out of the box decals.

REPLY & QUOTE
JClapp (Jonathan) said
my entry in the Lockheed campaign, a pair of twin C-121s