As for me, the dreaded "Real Life" has been plaguing me since New Year, and I am now woefully behind schedule. I grabbed a few hours in early January to do some of the basic hull assembly on my Artillery Observation vehicle, but then stalled until last weekend! So here is where it sits now, with the hull under way.

First big task was cutting off the tail lights, blending in the exhaust grilles, and making a new engine intake grille for the rear deck. This last one could have been bought as PE, but I relished the challenge of drilling scads of tiny holes!

While at the rear I added some welds where the grilles meet the hull, and replaced the undersized infantry phone box with one I 3D printed at Shapeways. I still need to add spare track links, but this pushed me into assembling the Meng set just to make sure there were enough spares left over because the box does not say how many you get. Turns out I have plenty, but there are fewer of the outer blocks than inner ones or linking bars - go figure!

Then came the joy of filling in all those scribed tool outlines on the hull. I plan to add some of the more visible bracket details from scratch.

And since I can't really get behind the side skirts to paint or add wheels/tracks, I had to modify them for more "positive" mounting after everything is painted and assembled. I attached the front guards to the sides, added a strip of Evergreen 0.100" angle stock to the back, and hey presto! I can glue them on as an afterthought. Note that I opened up the foot-holes - of course I did it AFTER gluing on the ends, just because modelling isn't complicated enough...

I seriously doubt I'll finish in time, but at least I'm moving again!

REPLY & QUOTE
LTMike4208 (Mike Norris) said
Here's an update on my UN 1A5DK. Construction is complete and I have done the first layers on the white paint job. I primed with Mr. Surfacer 1000 then did some black pre-shading. For the base coat, I mixed a few drops of Tamiya Buff into the Tamiya White to make the color a little less pure white. I'm still nervous about how I'm going to pull off this white paint scheme! I haven't decided exactly how I'm going to do the weathering. Next - tracks and detail painting... 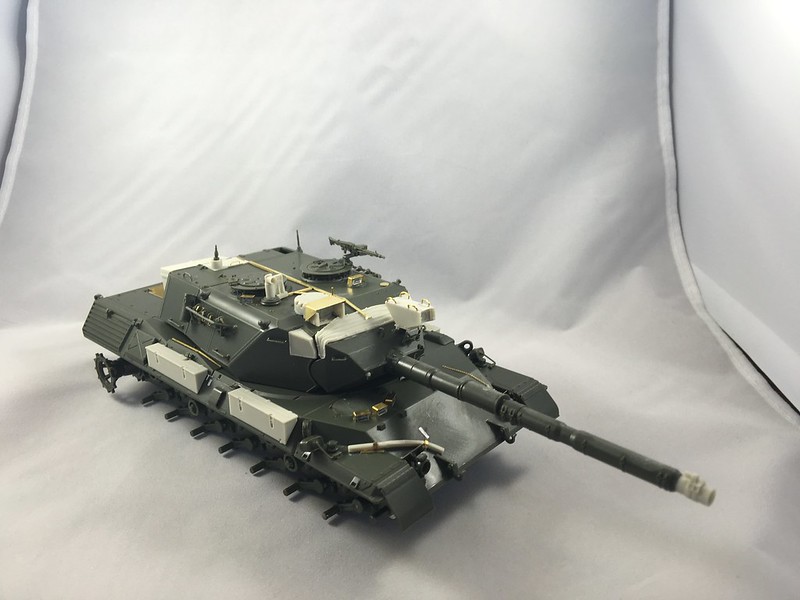 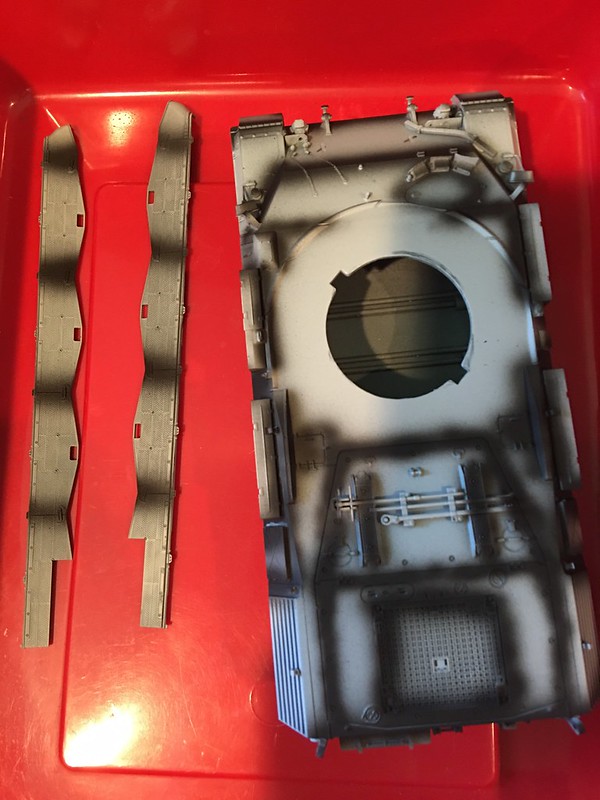 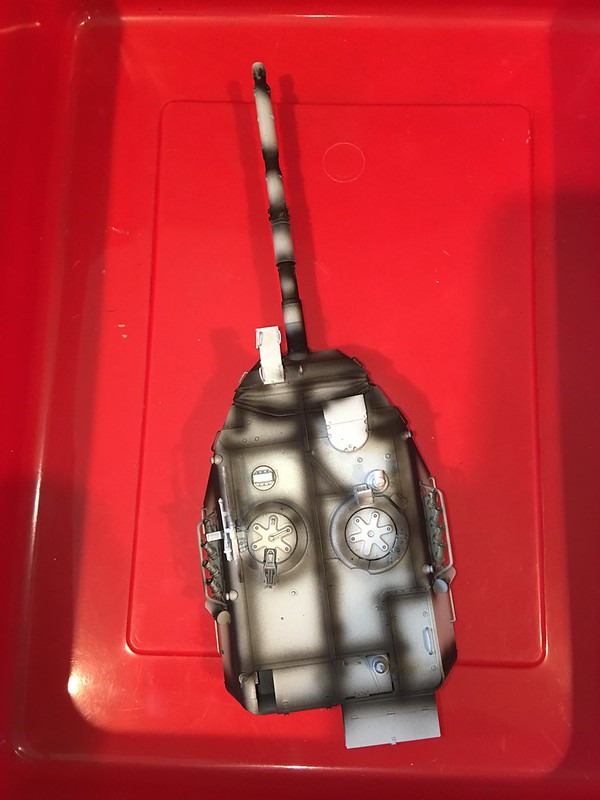 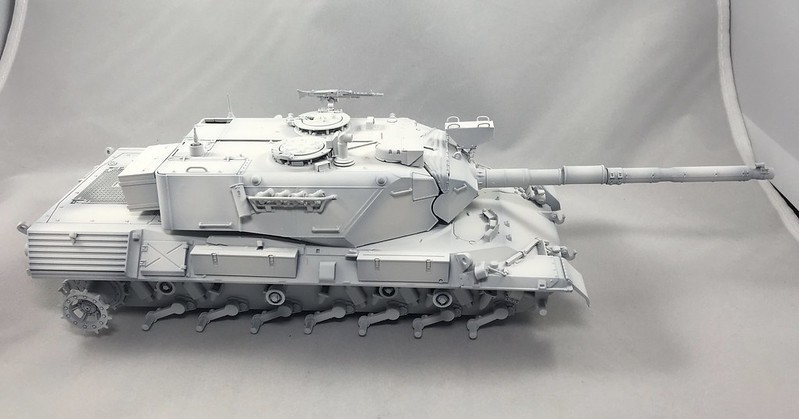 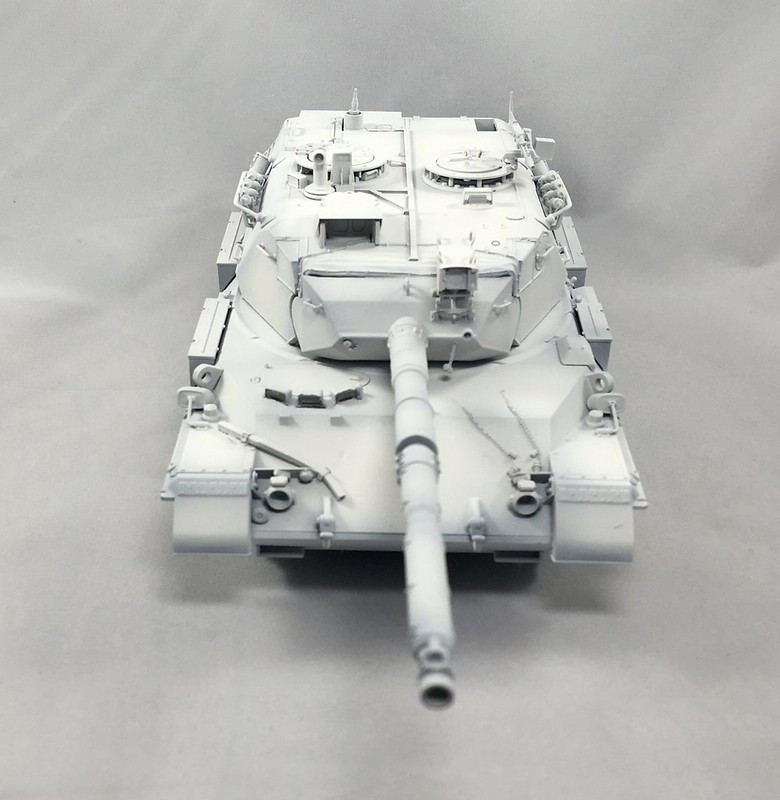 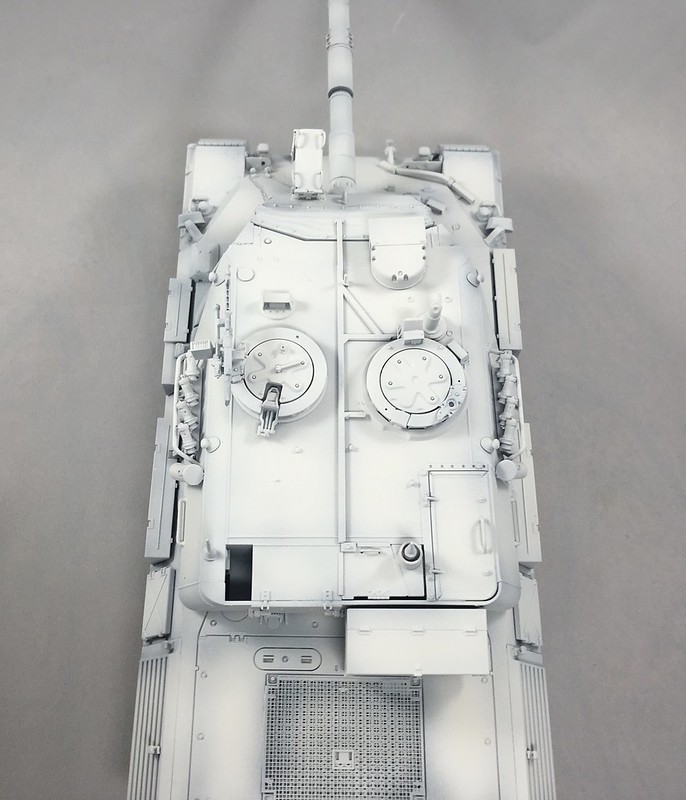 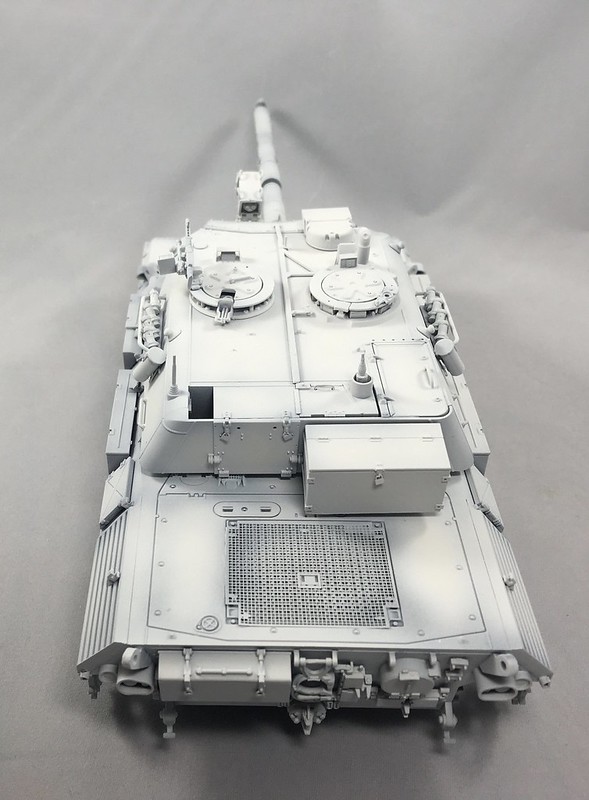 I'm calling my Leopard complete. This has been a fun campaign and the kit was mostly a straight forward build, even the tracks went together with no cursing

REPLY & QUOTE
dcandal (Daniel Candal) said
Hi, I´m going to beging this campaign with an Italery Leopard.
Some photos of the begining,

REPLY & QUOTE
mshackleton (Michael Shackleton) said
This is a Leopard 2. The campaign is for Leopard 1 I'm afraid. The rules are on the first page.

REPLY & QUOTE
dcandal (Daniel Candal) said
Yes Michael, sorry, I saw that after I had put the photos.

REPLY & QUOTE
dexter059 (Klaus Eberl) said
Hi people, I must say that the Orange Hobby PE parts are too much for me to tackle, so I took a lazy path and covered the main gun with a camo net. All parts are now ready to paint, I couldn't resist to take some pics with everything hold with tape to see how it looks...

REPLY & QUOTE
bwiber (Bob Wiber) said
Definitely some nice Leopards being built here.... this campaign thread is definitely one I will be referring back to when I start in on another Leopard... Congratulations to all working on their big cats....

As for the BARV..... well, even though the color is a bit to brown (I think it depends on the photo you are looking at, but that is me) and a couple other little things I think I am declaring it complete. After all, this one only took 9 years, countless photos/emails/discussions and a couple headaches. However, I learned a lot and ended up with a model that actually looks a bit like a Dutch BARV! Which I count in the plus column. 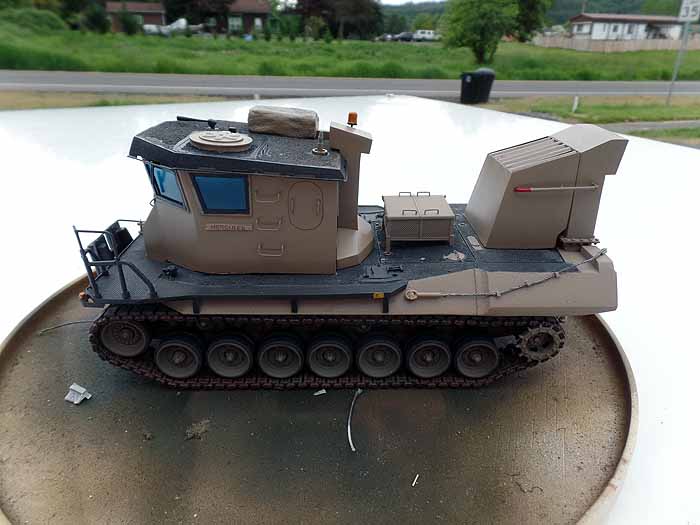 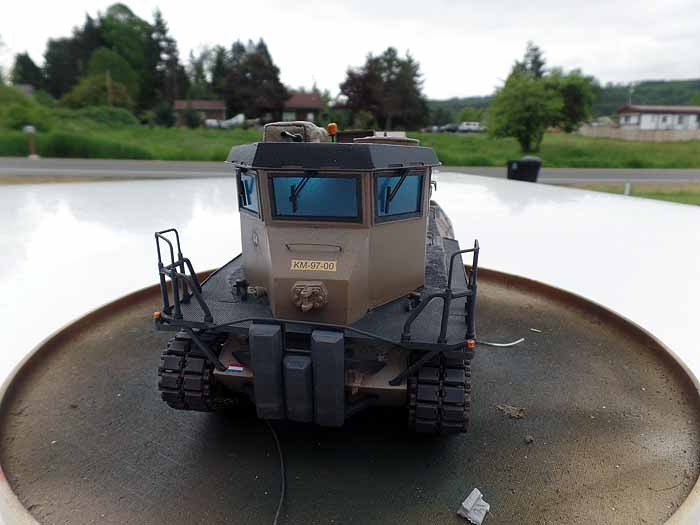 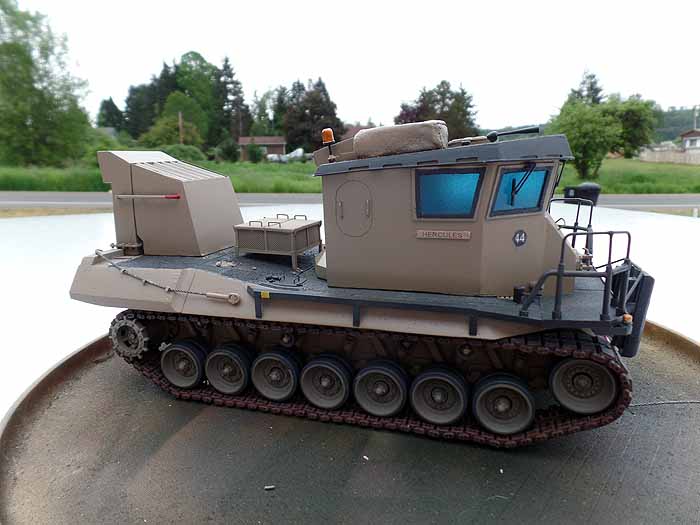 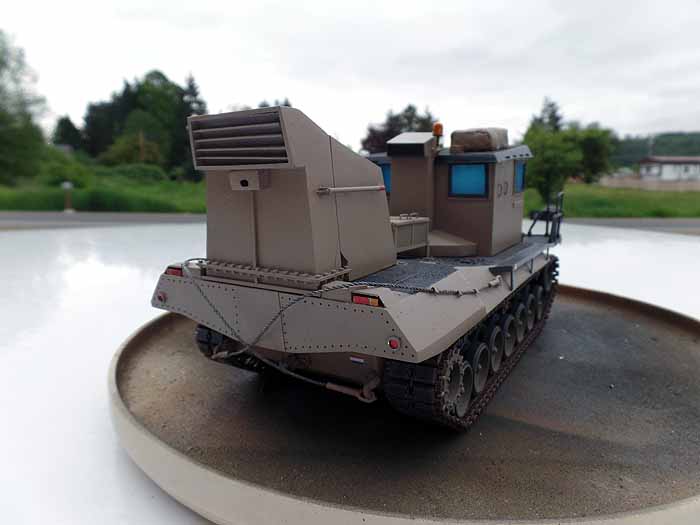 REPLY & QUOTE
mshackleton (Michael Shackleton) said
Bob, this is awesome. It is a very brave subject to tackle. It may have taken you 9 years but you got there in the end. You should be very proud.

Bob, this is awesome. It is a very brave subject to tackle. It may have taken you 9 years but you got there in the end. You should be very proud.

I am not sure that it was bravery, I think it was more just not having any idea what I was getting myself in for.

Thank you for all your help, encouragement and the photos that allowed me to get as close as I did. Definitely will be giving other scratch built conversions a try in the future.

REPLY & QUOTE
barkingdigger (Tom Cromwell ) said
Bob, I'm seriously impressed! Looks great - I just wish I had one to tool around in...

My own build is getting little if any bench time at the moment, so won't be anywhere near ready in time. Of course, we can always convince Mike to run a "son of Leopardmania" campaign where entries from the previous campaign are accepted!

REPLY & QUOTE
junglejim (Jim Carswell) said
Finished my C2 last week, in time for a show. Got a silver at the IPMS Winnipeg Valourcon this past weekend.

I really like the chipping and the finishing on the pioneer tools and rusty grousers.

REPLY & QUOTE
"We're not the public service of Canada, we're not just another department. We are the Canadian Forces, and our job is to be able to kill people."

Jim: Fantastic job! Really makes me want to finish mine

REPLY & QUOTE
Armored76 (Cristian) said
I finally got around to put the camouflage on my 1/72 Leopard 1:

I free-handed the camo and it's the first time I'm kind of happy with the way it turned out. I had two previous trials with two other models where the black was constantly spitted on the model.

REPLY & QUOTE
LTMike4208 (Mike Norris) said
I finished up my UNPROFOR 1A5DK today. I think I may have over done the weathering a little but I'm happy with how it turned out overall. This was the most complicated build I've attempted and I think I learned a few things over the last few months. Thanks for a great campaign! 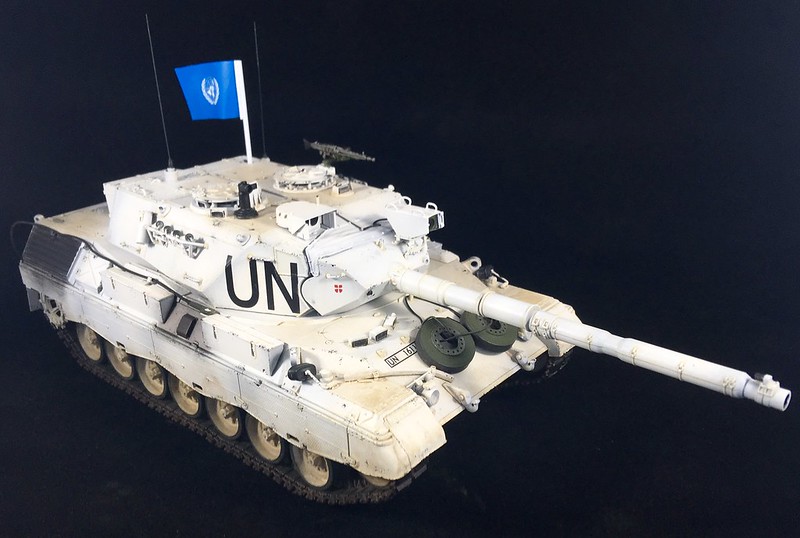 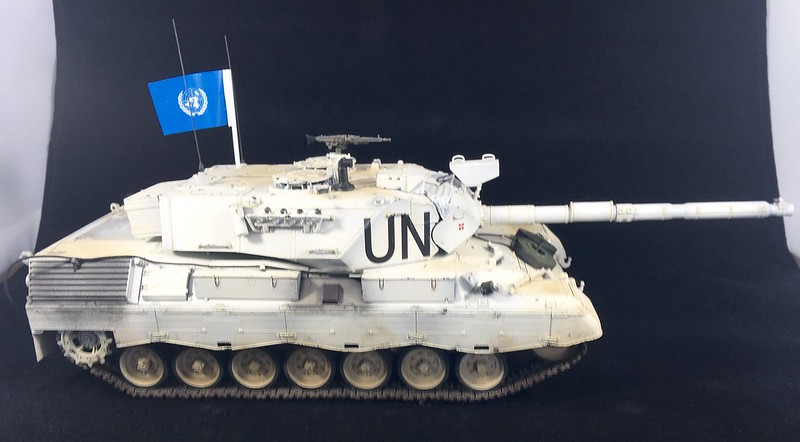 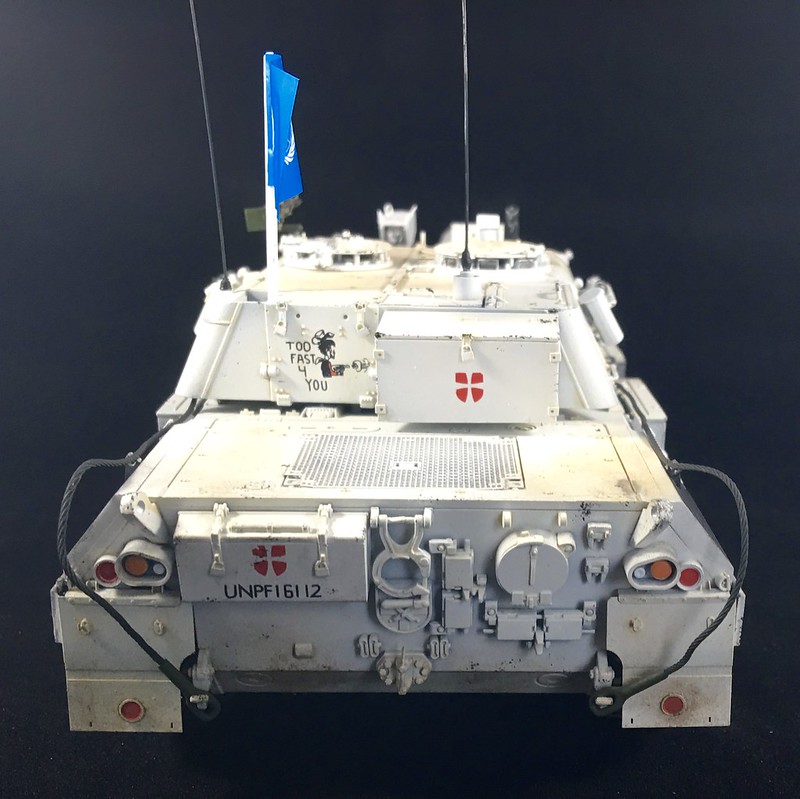 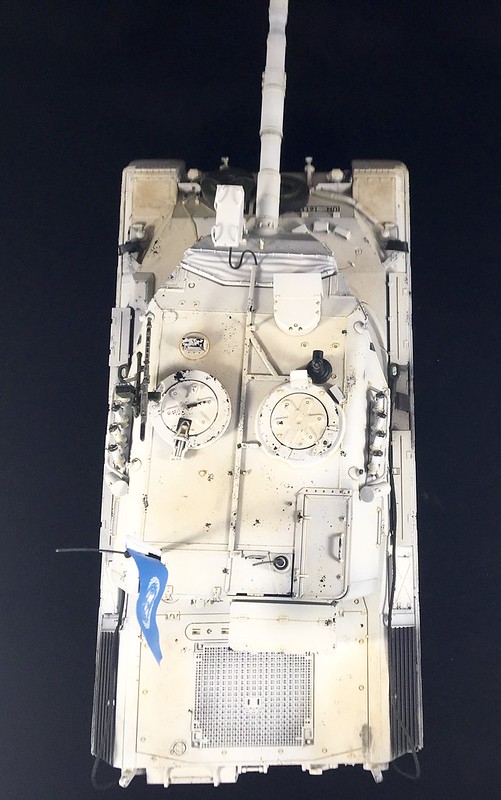 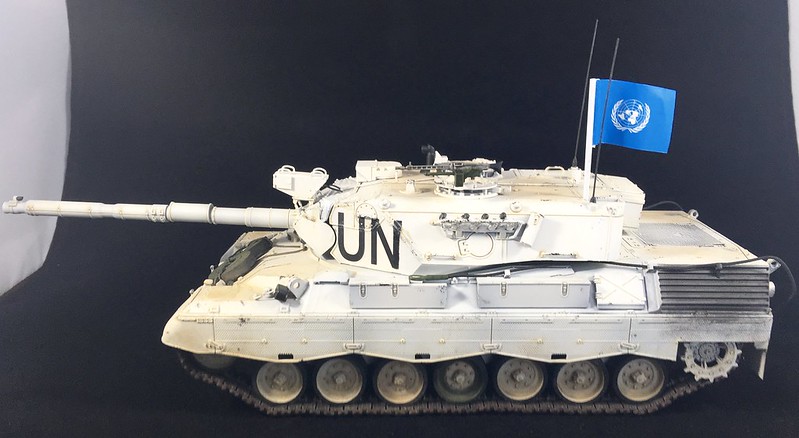 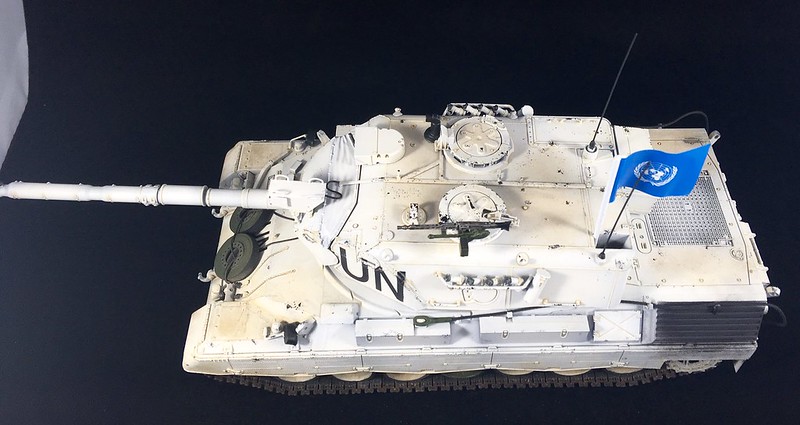 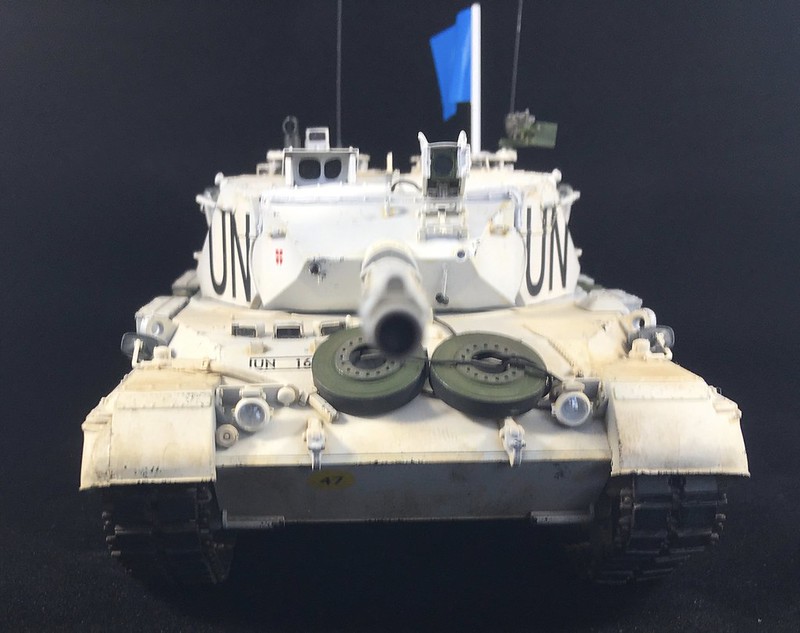 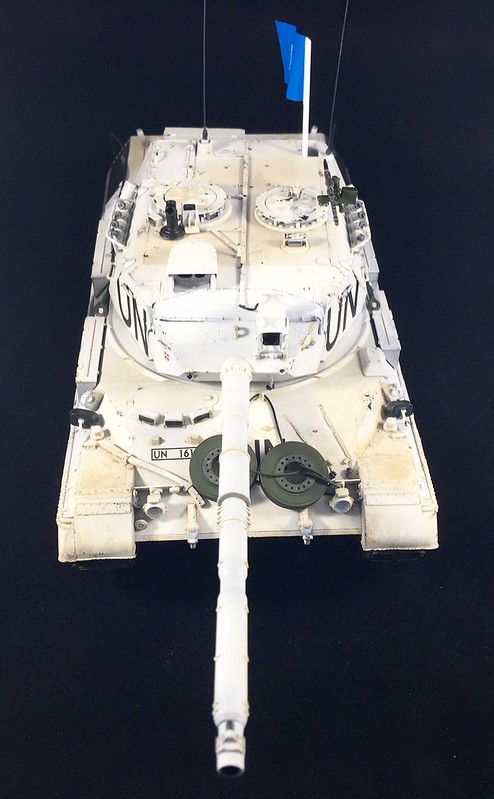 I don't think the weathering is overdone at all. Road dust was very common in Bosnia due to the ever present destruction.

REPLY & QUOTE
"We're not the public service of Canada, we're not just another department. We are the Canadian Forces, and our job is to be able to kill people."

REPLY & QUOTE
dexter059 (Klaus Eberl) said
I'm struggling to meet the deadline, for now I've done first step of painting (camo done). I addes a Hoffmann device from old Tamiya set. Now for the details and after that weathering. I hope to do 2 crew figures as well. Now I'm begging to get a couple of weeks extension to finish...

REPLY & QUOTE
mshackleton (Michael Shackleton) said
You are nearly there Karl. Keep at it. I can't change the deadline as rules are rules, but you still have some time. Don't worry about the figures. Add them after the competition if they are going to slow you down. I've given up on my competition builds as I simply don't have the time!

REPLY & QUOTE
Thudius (Kimmo Happonen) said
Some good work being done, alas it looks like I won't be able to play this time around. A couple of commitments just took a lot longer than expected and I have one more to take care of. Nice to see so many people on board with this one.

REPLY & QUOTE
There is a time to laugh and a time not to laugh, and this is not one of them.