REPLY & QUOTE
ColinEdm (Colin Key) said
Stephen, great work on the Mk IV, it will be a shame to see it hidden by mud!

REPLY & QUOTE
Florence (David) said
Going to have a crack at this one. Hoping to start sooner.

REPLY & QUOTE
Thirian24 (Dustin) said
Excellent. I have this kit as well. Looking forward to your progress.

REPLY & QUOTE
stephenmodel (stephen gache) said
Well i had some trouble with the tamiya tracks. I hate the glue and bend link tracks. I messed them up bad and order some afv workable tracks. They look much better but just takes a while to build. I am hoping to get them done this weekend. 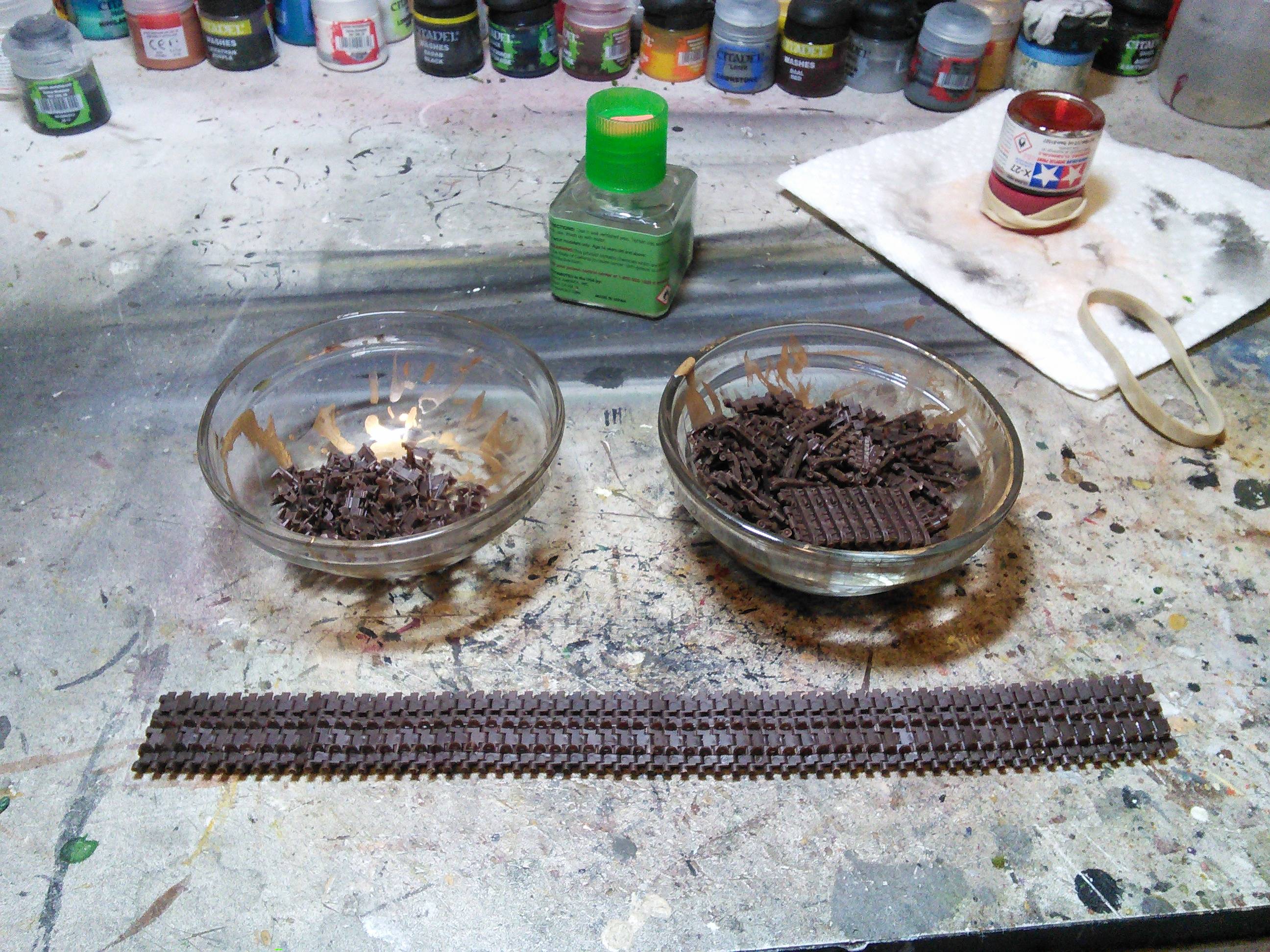 REPLY & QUOTE
pnance26 (Patrick Nance) said
I see the designation "AK" with paints... what brand is that, please?

REPLY & QUOTE
Charlie-66 (Guy DeYoung) said
Basic construction is done on this one. Hope to start painting tomorrow. The build is a breeze. The main P/E air grill has it's own bending jig and it's easy. Be careful with the smaller P/E screens. Some sit flush on the housing, where others sit recessed. Link and length tracks are not my favorites but these went on OK.

The new tracks are coming along nicely Stephen.

REPLY & QUOTE
DaGreatQueeg (Brent Watterson) said
Nice to see so much Tamiya stuff being built and really great finish on the Matilda Mark!

And my Super Pershing is done and dusted and has been shipped off. here's a few piccies ...

I got the base coat on tonight. German Grey. 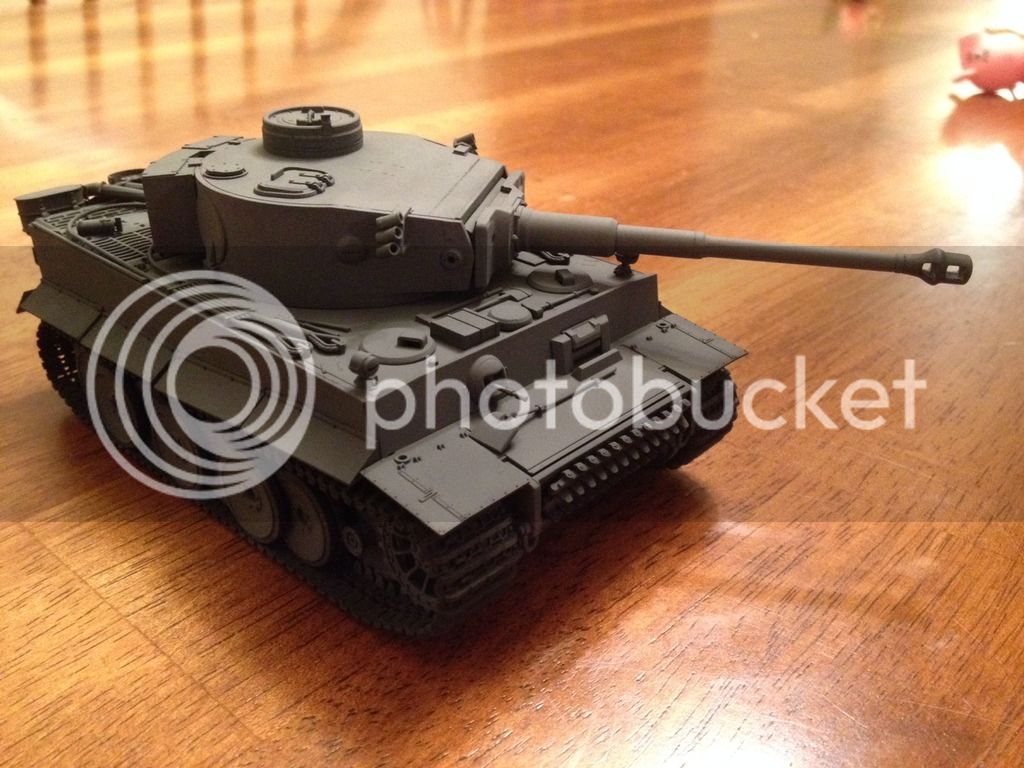 Still a lot more to do.

REPLY & QUOTE
Thirian24 (Dustin) said
I did a bit of color modulation. Thoughts?

I don't have the greatest light.

Hi all, so Ive got a bit of downtime and figure its about time I actually finish a campaign. Lots of cool builds here, thought I'd dive in with the new M4A3E8 kit.
Eric

REPLY & QUOTE
Tazoslo (Lars) said
OK, the time of my annual build is coming up, the Easter holiday

The extended family is packing up and leaving for the mountains (11 people and 5 dogs(?!)), and I have found that a good way to deal with this is to build a kit.

Unfortunately I haven´t earlier thought of joining a campaign, this year however my head was clear early enough to find something that would fit in to a campaign. With a Tamiya campaign up and running it was an easy choice! It was the Tamiya catalogues of the eighties (you know, before Internet and all that sh17) that really spurred my interest. So what better way to go this year then with a Tamiya build.

I have 5 evenings for this build, so it won´t be anything fancy. 100% OOB, with just paintbrushes, back to basics here! I picked this model since it has some local relevance, the Stug III was stationed in Norway from when they rolled out of the factory to the end of the war. The Norwegian army even used them for some years after the war until they were used for target practice or just scrapped.

The version I will build is from the 303 Stug Brigade, 1943, unfortunately for me the most boring of the variants. But local is local!

The build starts tomorrow and will (hopefully) be finished on by Sunday evening, we are going home on Monday.

REPLY & QUOTE
minas-ithil (Stephen Vermilye) said
To One and All,
Other than some minor tweaks, the Mk IV Male is finished! I posted some shots in the Campaign Gallery. After a few comments, I will add them here, as well.

Guy - Nice start on the BT-7. I have one in my stash for future reference.

Colin - I hope I did not bury the beastie in dirt, but it is the messiest tank I ever built.

Dustin - Good progress on the Tiger

Lars - Good luck on the 'speed build' of the Stug. III. A very good candidate for a fast, OOB build.

Now on to the show. After the last 'report', I began the process of dirt, mud, pigments, more streaks and some chipping. I mainly used AK pigments and streaking washes. I added Scenic Express Fine Dirt for the accumulations of dirt and mud, especially on the sponson tops. I found a few photographs where these were positively buried in dirt, so I tried to emulate that, to some extent. I hope the pictures bear this out and, as usual, any questions or comments are very welcome and appreciated.

This has been a fun Campaign, thanks to everyone taking part and to those on the sidelines, there is still plenty of time to join! My build and paintjob was a total of about 25 to 30 hours over roughly 6 weeks, so join up! Now on to the Trumpeter Campaign for a Strv. 103b! (I think)

REPLY & QUOTE
greif8 (Ernest Roth) said
The Zero is finished! Though I still have to complete the carrier deck base, I couldn't resist taking several photos with the plane and pilot posed on it. Overall, I am very satisfied with the build, though, as usual, I managed to make a mistake or two. I like the overall paint job, and find it to be pleasing to my eye, and I think I managed to hit the "sweet spot" of showing a moderately worn and faded aircraft during the Aug-Oct 1942 timeframe. Likewise, I think I got the cockpit about right. As far as the pilot goes, the face could have been better, but a lot of that is due to the limitations of injection molding vs casting; the uniform turned out pretty decently. I am less pleased with the decals, I could have done a better job with them. I plan to make a few posts showing different aspects of the build. All comments and critiques are welcome. If folks want I can post some more photos.

Hmmm, looks like photobucket does not want to load tonight. I'll try posting some photos tomorrow.

I did a bit of color modulation. Thoughts?


I don't have the greatest light.


Dustin, I think once you do some washes dot filters and pin washes it will really make the color modulation pop for you. So far so good.

REPLY & QUOTE
Namabiiru (Mark C.) said
Stephen,
Absolutely top-notch Mk IV! But since you say you're still tweaking, please allow me to ask if, with that much dirt piled up on the sponson (outside of the track), shouldn't there be an equivalent pile on the roof (inside of the track)?

Nevertheless, all of your weathering is spot-on!

Dustin - your Tiger I is coming along nicely.

Ok let me try to post some photos of my A6M2b Zero build. The base is not complete, but I could not resist shooting some photos on the plane and pilot on it. This has been a great group build, with a lot of top quality models thus far.