I have the decals on my Panther D, going to try fit in some light weathering before the end of the day.

REPLY & QUOTE
Armored76 (Cristian) said
Great models everyone! This was a nice campaign to be part of. Looking forward to my new badge

REPLY & QUOTE
Hudson29 (Paul O'Neil) said
Thanks Clayton, my eye may grow to like it too. If not, I can always build that set of Friuls and add them later. It could also be that the rubber band tracks will relax some after seeing where their duty lies . . .

Here are some pics of last night's work:

We're gettin' close now, it should be in under the wire!

REPLY & QUOTE
Hudson29 (Paul O'Neil) said
With just a few days to go on this campaign I have stepped up the pace of construction. The wheels & DS rubber band tracks are on now. It has been a while since I used any of the rubber band tracks & I had forgotten how the try to stay circular lather than act like metal links and drape realistically. I ended up gluing the tops of the wheels to the tracks. They still don't look right but they are a bit better. Here are before & after shots:

Here is the superstructure ready to install:

REPLY & QUOTE
brekinapez (Shell Bush) said
Okay, I am done - for now. While working on this and the AFV campaign I came too some ideas on displaying my growing collection of built kits and for now I am going to do light weathering so I can adapt my kits for specific diorama ideas once I get my setup finished. Then they'll get their final weathering.

To refresh everyone's memory, as it has been a while since I finished the first kit, I began with Dragon 9045 Panther G, except I left off the IR gear and finished it as a late '44 vehicle. Decal film popped when I hit it with a filter that got through my acrylic seal, which was disappointing, but otherwise the kit went together well pretty much OOB except for the tow cables, which I made from thin wire twisted in a pin vise.

Then, since there was a lot of time left, I decided to tackle Cyber Hobby 9144 Tiger II with production turret. This was another OOB, other than adding wire for the headlight and PE screens since the kit had none. This was done as a late war in 3-tone over red primer. The DS tracks were terrible, and I had to cut out a link and splice them to get the correct tension for a relatively new vehicle (Depicted as built, the war was ending soon).

And then, in the midst of building the KT, I thought, "Why not build one of your Jagdtigers while you're at it?" And so I present Dragon 6051 Jagdtiger with Porsche suspension done as either the 9th or 10th chassis; I don't recall. Again, out of box except for headlight wiring.

Everything painted with Tamiya acrylics over AK primers, then various pigments for dust and mud followed by a graphite pencil for chips and scratches.

5 days left fellas. Get those Cats finished up!

My second cat should be done tonight!


Or what I am going to call done.

REPLY & QUOTE
Thirian24 (Dustin) said
Looking real nice! I really like the camo, you did a great job.

REPLY & QUOTE
ComradeMP said
On it. Went a long time with no progress, but I started right back up. Painted, glossed,washed, and flatted most of the parts. Just working on the road wheels on the opposite side as well as working the skirts. Can't see it to well, but I took a pencil to the road wheels outer rim and the part of the inner road wheels that make contact with the outer road wheels (I remember someone mentioned something like that once). Also some silver paint here and there. Soon as that's done, it'll be down to just painting/washing the tracks. Then,I'll finish up by adding the side skirts, AA gun, and tools. Been really taking my time on this one, it'll be my first completed German tank

Where I last left off:

And after a few days of slow work:

Fellas, don't waste any time, we have 11 days left!

John - Sorry to see the end of your Tiger project. My cat found a set of resin tracks drying taped to a board and thought they were toys. She crunched'em pretty good which set me back a coupla hours . . .

The Dragon Jagdpanther is coming along. The camo has been daubed on in stages and the Archer transfers rubbed on followed by a very light filter to blend the colors and marking together:

I over thinned the old pot of Pactra Scale Black and found that while the paint flowed well from the brush, it could bleed here and there which will require some touchup . . .

Here are the big bits with some washes applied:

I am being careful with the washes to keep them out of the holes in the zim where they will tend to show the problems. I'm trying to hide the problems in plain view.

In the last two pictures the marking look a bit worn. The transfers really did look painted on to the zim, very convincing. I found that by rubbing the wash with a finger the markings started to look distressed somewhat like they might have been rubbed by the boots & pants of the crew clambering around the vehicle. I did not intend this but kinda like the look . . .

REPLY & QUOTE
LikesTanks (Richard Long) said
Ouch, the poor kitty!
Lovely builds here so far, will be putting mine to shame.
Speaking of, as photobucket is working for me again at last, some progress shots of my Italeri Panther G (WoT edition).

Using a spare Dragon barrel and sprayed the wonderfully smooth turret with a little sprue dissolved in cellulose thinners to give it some texture.

Sadly to say, that I have to bow out of this campaign. My 3 year old decided to play with the Tiger with the rest of his cars.

If there is another Big Cats campaign, count me in!

REPLY & QUOTE
iflytb20 (Raj) said
Calling it done. Thanks a lot for a great campaign. See y'all in the next one. 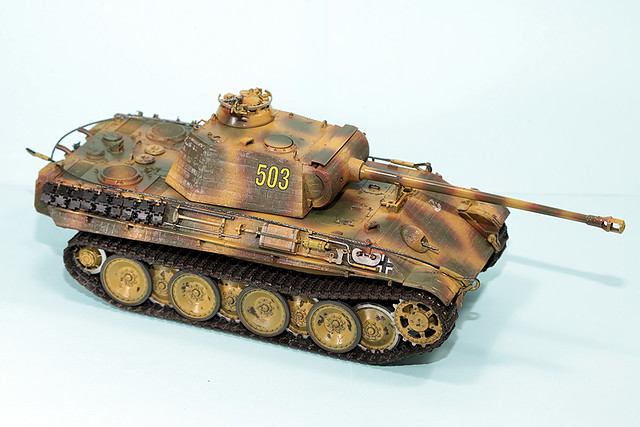 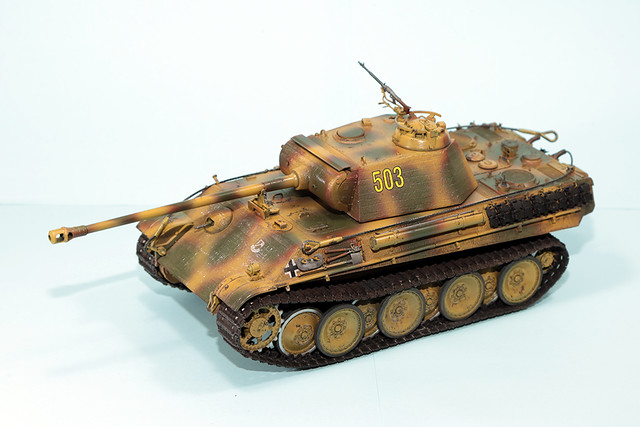 REPLY & QUOTE
On the Bench:
A Big mess

tried that, still no joy I have been taking the photo saved on my desk top. Is that were I am going wrong????

I have no room on my armorama gallery. as most my pictures are on photobucket

There were issues in the last couple of days. Try it again, as it may have been resolved. See here: