REPLY & QUOTE
hofpig (Paul Anstee) said
This is the kit I have ordered can't take photos at the Mo as my camera is MIA.....

REPLY & QUOTE
SGTJKJ (Jesper) said
Since Sci-Fi is allowed I will enter with a plasma mortar from the Horus Heresy war game.
It is a resin kit, so construction will be complicated.

REPLY & QUOTE
bison126 (Olivier Carneau) said
I'll probably enter with the Meng PzH 2000 or the ROK K9 I just got for Christmas. I also have the "brilliant" Alanger 2S9 but I think I'll keep it for another occasion.

Here is my entry - a Diamond T968 towing a M114 155mm howitzer in Danish service in the 60-/70ties. The Diamond is a Mirror Models kit and the howitzer a Bronco kit. Both on their way to my post box.

Looking forward to this build

REPLY & QUOTE
canismalus (jbranca) said
I'm going to build something else, too - Meng's PLZ05. If I'm feeling brave when I finish, I might just try one of those fancyschmancy Chinese digital camo schemes.

REPLY & QUOTE
Geoboffin (Richard Blight) said
I'll join GazzaS with a Brummbar of my own - Dragon 6819 in 1:35

REPLY & QUOTE
keo (kenneth oestergaard) said
Ive recieved my kits - would it be okay for me start?

Gambling on this is okay, here is my kits and start-up photo.
Just wants to get started

Ive recieved my kits - would it be okay for me start?

.
At this stage I'm holding off and going to start the originally intended piece once the the start date passes.
That said the 9" mortar is still teasing me, so could very well end up on the bench as a "side-line" build

Please count me in with 'Big Bertha'....

REPLY & QUOTE
andyman (Andrew Itterly) said
hello fellow modelers,
this will be my kit for this campaign.

REPLY & QUOTE
ziggy1 (Chris) said
Hello all.
Well, Like Andrew (andyman) I will be trying my hand at the 105mm. This will be my first attempt at an artillery piece by itself, so should be interesting to say the least!
Cheers.
Chris (Ziggy) 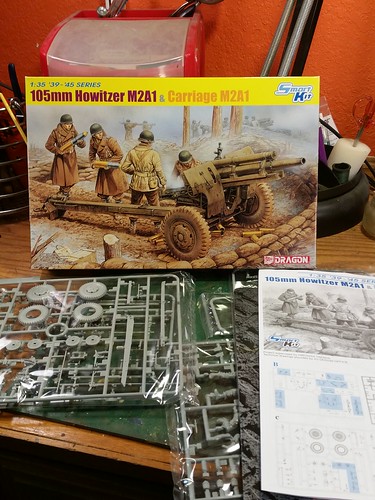 REPLY & QUOTE
erichvon (Karl Flavell) said
Would anti-aircraft guns be allowed as they are a type of artillery? I fancied building an Sdkfz 140 Gepard I've got (which mounts a Flak 38) rather than a conventional towed piece. I thought I'd check before I make a start, I'm just trying o get my vehicle stash down a bit.

REPLY & QUOTE
Nothing is so exhilarating in life as to be shot at with no result.
- Winston Churchill

Working on the trail first.

REPLY & QUOTE
so many modelkits, so little time...

REPLY & QUOTE
69mudbone (Ken Henderson) said
Andrew,Chris...... I have that in my back order. How do the figures look?

REPLY & QUOTE
andyman (Andrew Itterly) said
Ken,
The kit figures look ok to me. I would have liked all to have field jackets instead of the two who have long coats. I may use them anyway. The kit doesn't supply extra ammo or empty shell.

This old kit will be my entry. I'll also try to make a couple of figures and complete a vignette. I'll have to buy some extra shells and boxes, hate to spend good money on this crude kit, oh well...

Everyone looks like they're going to have some nice builds.
Take care,
Don "Lakota"