REPLY & QUOTE
ReconTL3-1 (James O'Leary) said
There are a lot of really nicely done armored cars in this campaign. Peter, I really like the work you are doing on the Otter. I had been thinking about buying the kit and now I most likely will. For my entry into this campaign I will be making the ICM Panhard 178 Command Car. I started it back on the 14th of April. Being that I model mostly Vietnam War subjects, I originally bought the kit when Squadron had them on sale for about $15.00 during one of their flash sales. I remember reading where the French had a few in French IndoChina, but after i got the kit I found out that the version that was in IndoChina was the 178B version with a different turret. So this is just going to be an out of the box build for me. Since I am working on other projects, I am not going to do the interior so I can get this done quickly. Perhaps is an aftermarket turret for an IndoChina version comes out in the future, I might make another one.

This is how far I have gotten as of today: I should be able to prime the lower portion tomorrow. This has been a pretty easy and quick build.

REPLY & QUOTE
SGTJKJ (Jesper) said
Small update. Base coat and gloss coat are on. Next I will try my luck with Camo decals. Previously my results have varied. Hopefully this will work out nicely.
More to follow 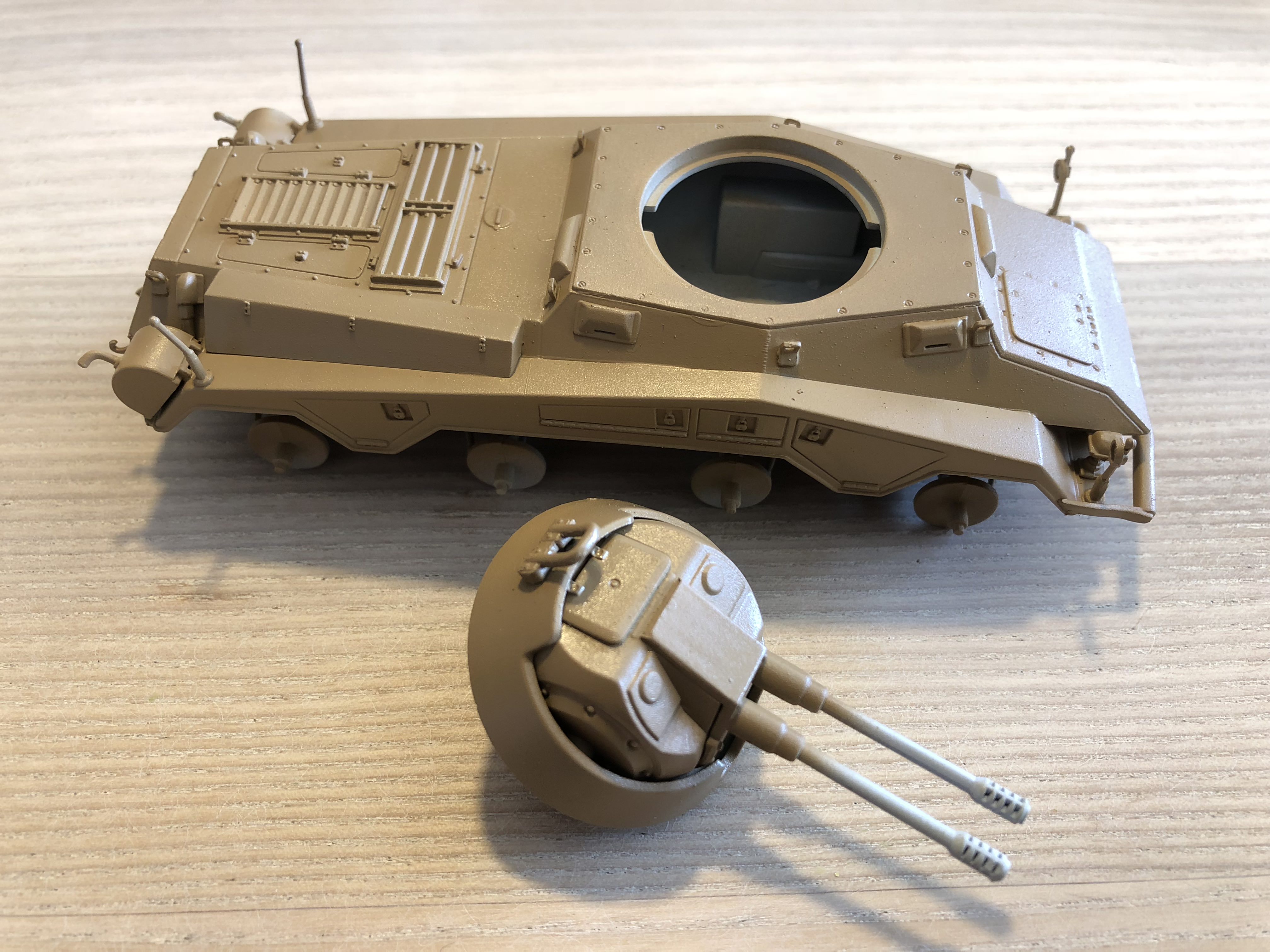 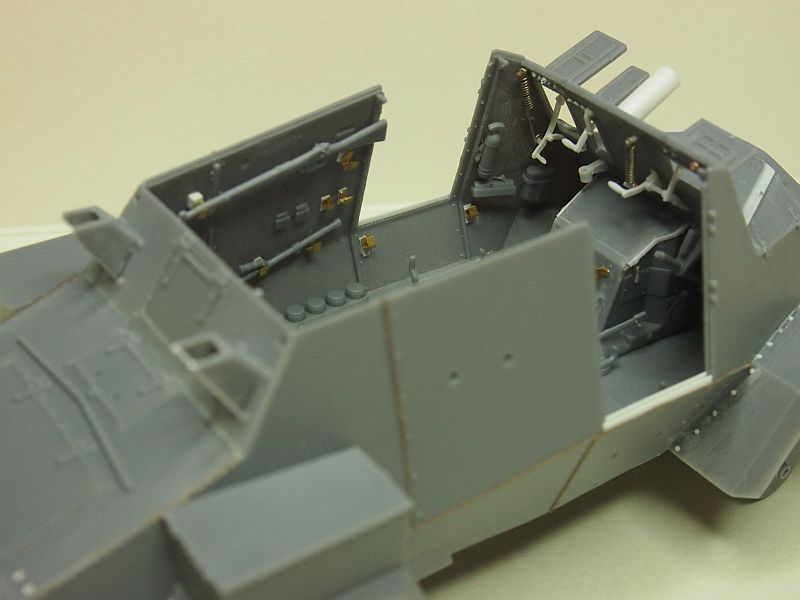 Under side of Open hatches 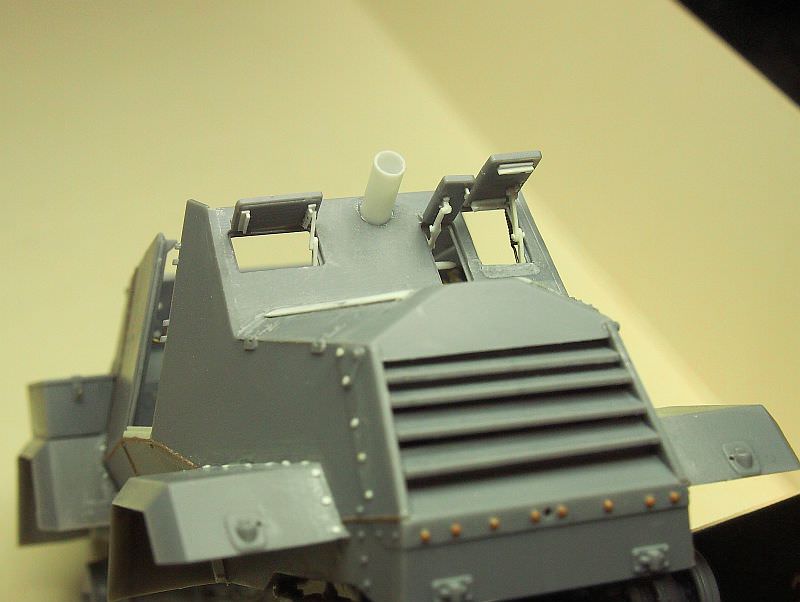 REPLY & QUOTE
petbat (Peter Battle) said
Okay, where am I at?

Underside has missing details added - The body part where the fenders are bolted on has nuts, bolts on the diff bash plates and I replaced the undersized rivets on the front panel, which were incorrectly evenly spaced and the hole was missing and also on the side of the housing where IBG give you 6 undersized ones, in lieu of the larger 5. 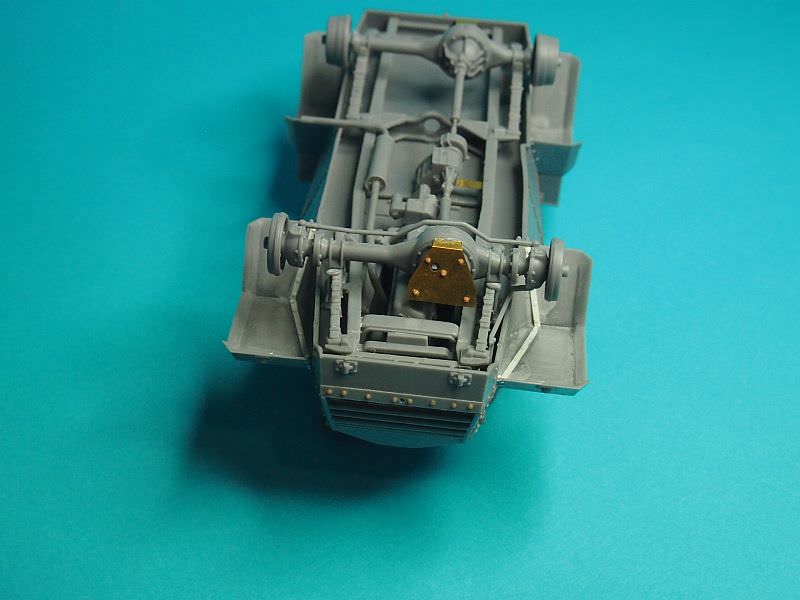 I am not a 'hold it up to scale plans and measure' guy - unless I am scratch building - but there are very notable dimension errors in this kit. IBG gives you:
- The engine hatches that fit right up to the bottom of the 'windscreen' where they actually fit up to a band fixed to the firewall on the real Otter. That is the grey stripe seen in this pic.
- The gunner's window hatch which is too tall and sits flush with the bottom of the gun opening. The opening has been shortened in height by adding styrene strip into the frame and the hatch was cut down to suit.
- The side door openings and doors are too long. IBG would have them fitting up to the joint in plates, when there is a small section of the upper plate over the join. Just visible here is the added styrene to fill the lower part of the opening. Again the doors had to be shortened to match. 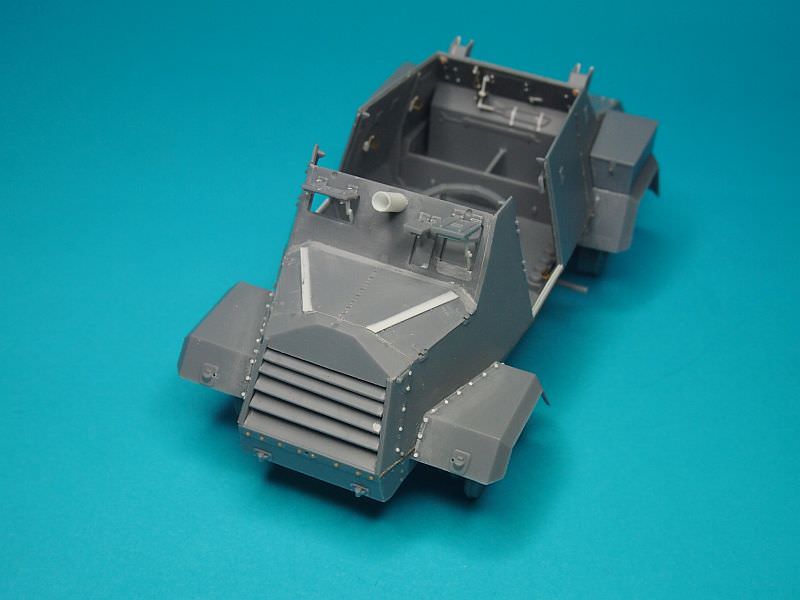 You will also note the grenade launcher has been replaced. The kit has a truncated cone, not a cylinder. It is also seen in this pic.

I have replaced the rivets along the side and rear in the correct locations and added the bolt heads for the fenders, as well as the weld seams from stretched sprue. This is in progress at the moment. Staples also added to the stowage boxes. 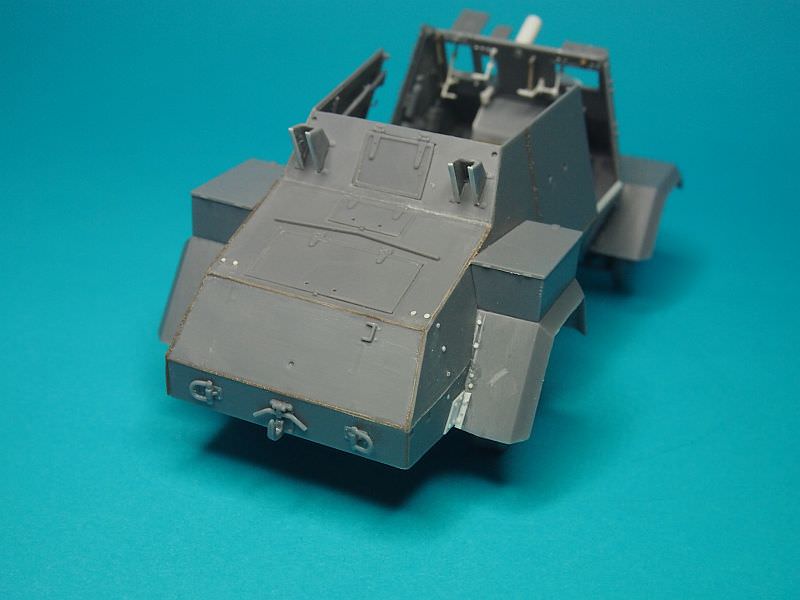 Then I have added all the lever mechanism and springs for the hatches, added clasp fittings to the engine/transmission access panel, etc 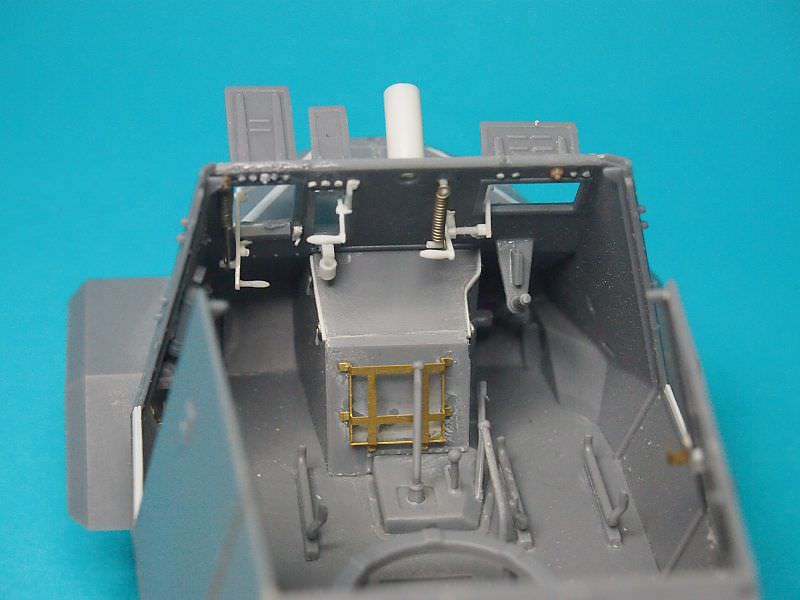 ....and the same for the rear although this will barely be seen with the roof on and turret basket in the way.

The side panels also have fittings added for the Mk3 rifles, Bren spare barrel, plus the rack fittings for the Bren and Boys rifles, all of which are not included or are just blobs for the items to rest on. You can also just see the thinned aerial mounts where styrene strip has been added where the metal was bent around, not a solid thick piece of armour that the kit finish looks like. 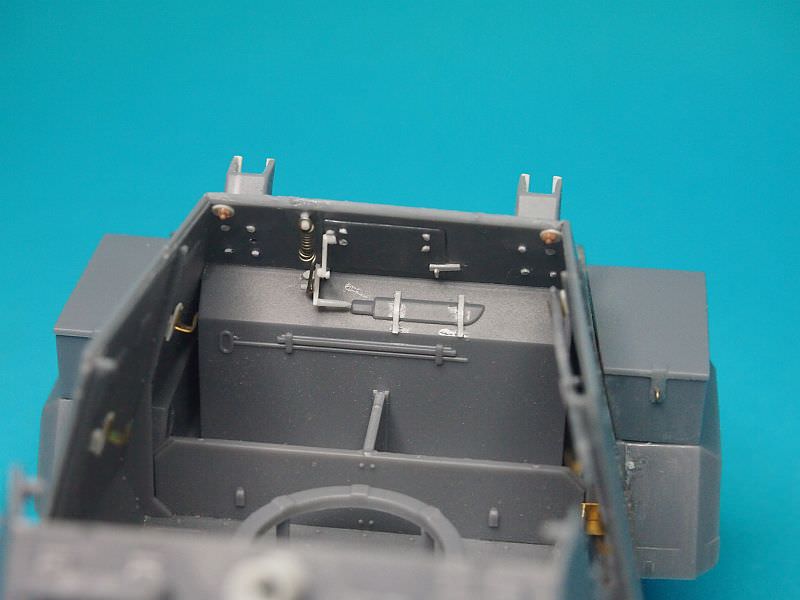 REPLY & QUOTE
SGTJKJ (Jesper) said
Thanks for the comment, Mark. I hope to do it justice.

REPLY & QUOTE
md72 (Mark Doremus) said
Wow Jesper, that looks neat. I'm not inclined towards German armor, but that one is tempting. Keep up the good work!

I have made some progress tonight on my armoured car. The flew together. As I will be using dot camouflage in decal form I will leave of the details until later. 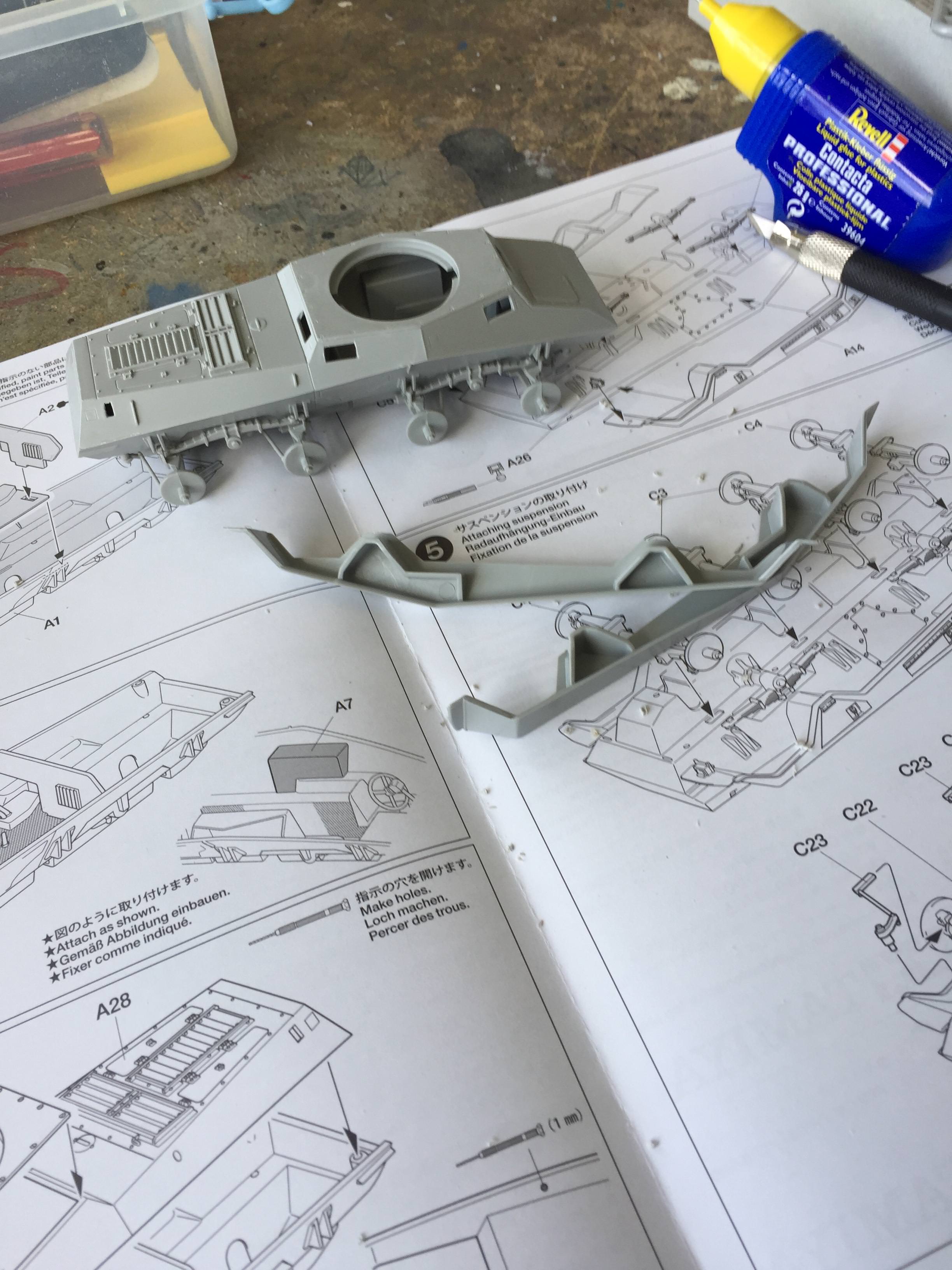 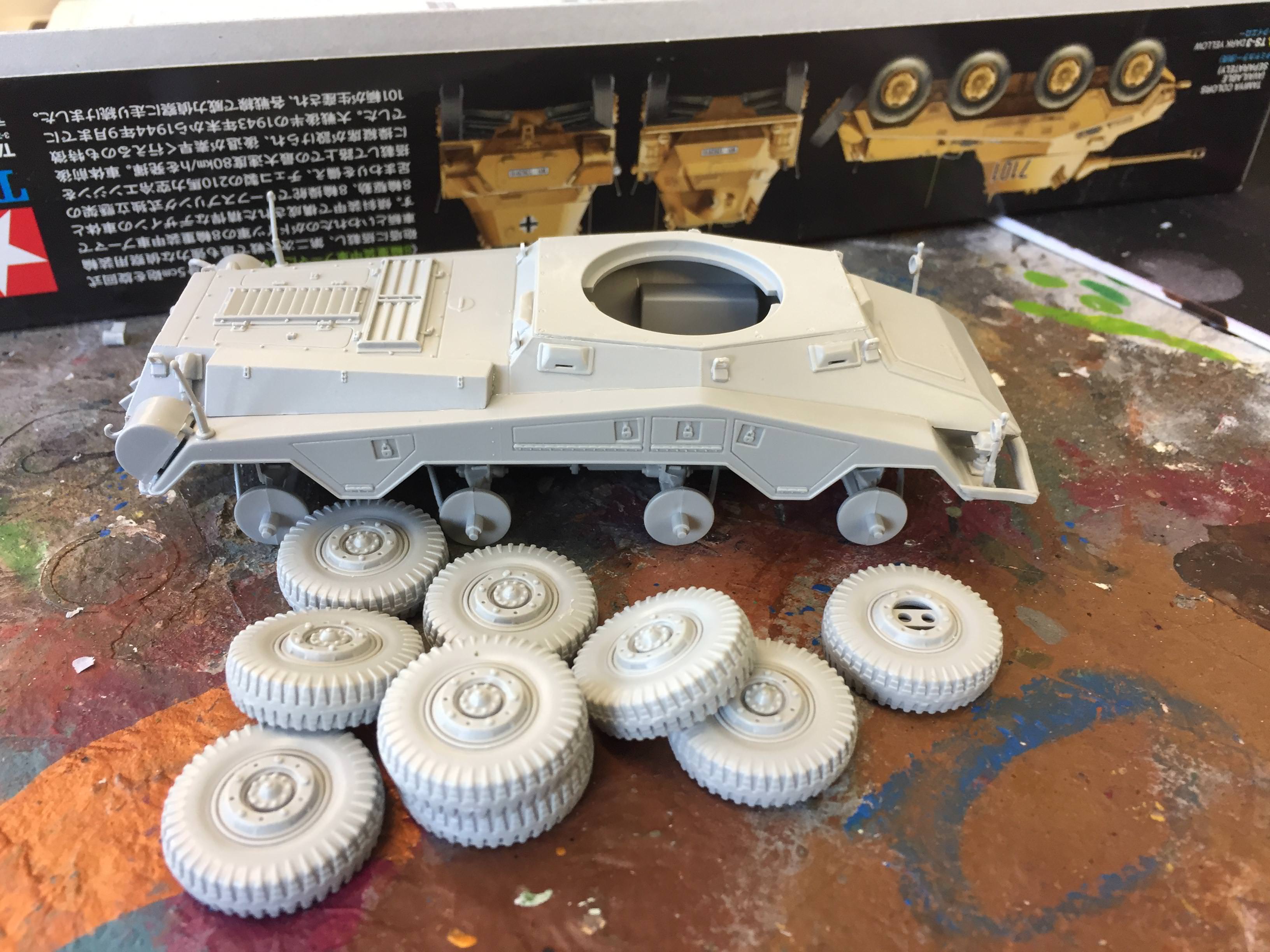 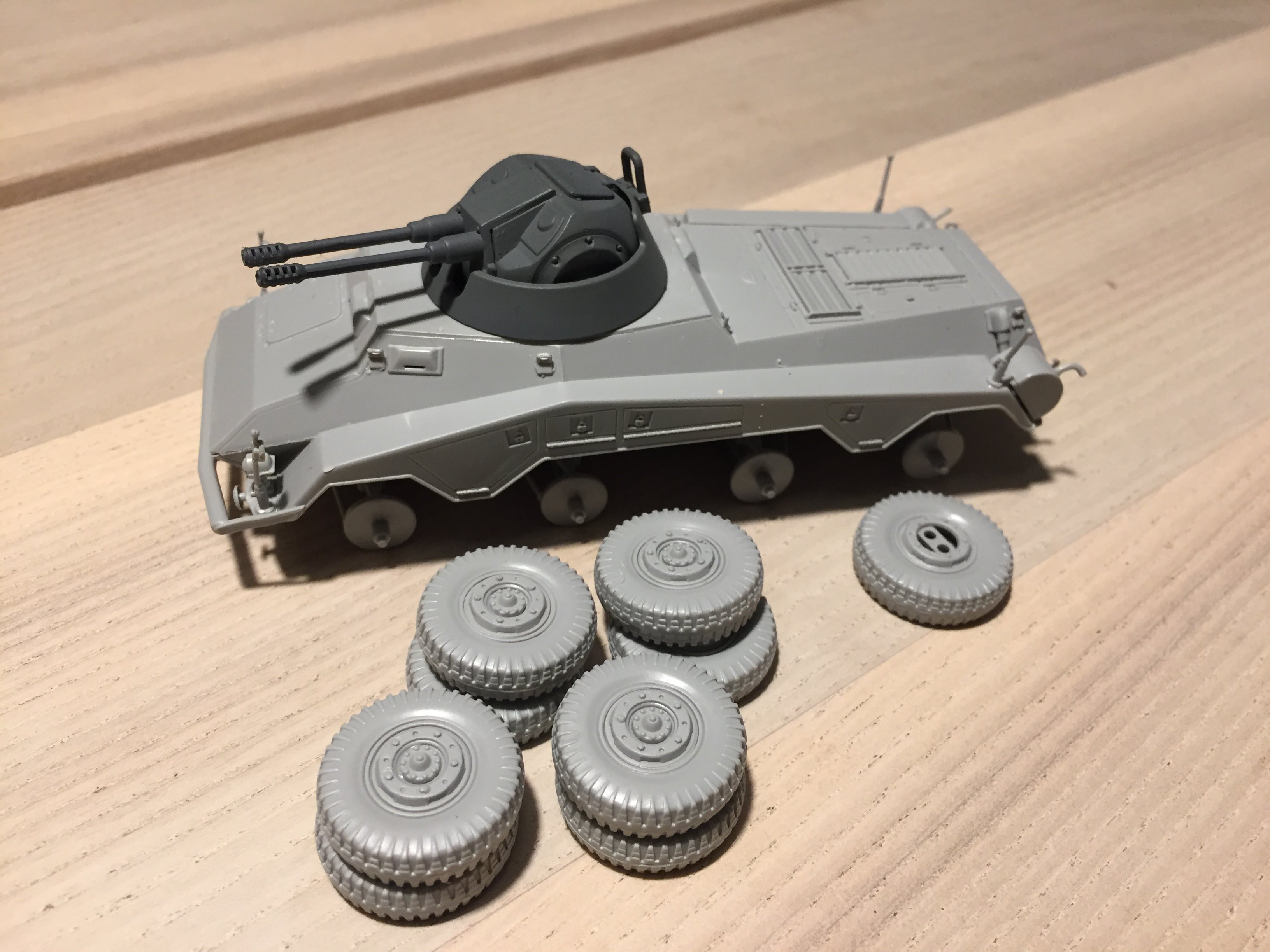 REPLY & QUOTE
petbat (Peter Battle) said
Nice Choice Linus. The turtle always reminds me of a vehicle made from the front sections of two vehicles.... the Dr Doolitle 'Pushmi-Pullyu' car.

Off to a great start.

Well I have not been idle, and will have some progress pics soon. I noted some dimensional issues with the Otter that I just could not ignore. Here is one. The shovel in the kit is WAAAY undersized, as are the pick axe head and shaft. They are more akin to 1/48th scale.

I have started reworking one from the spares box. To give you an idea of the size difference of the kit one, I have placed it next to the arm of a 1/35th figure: 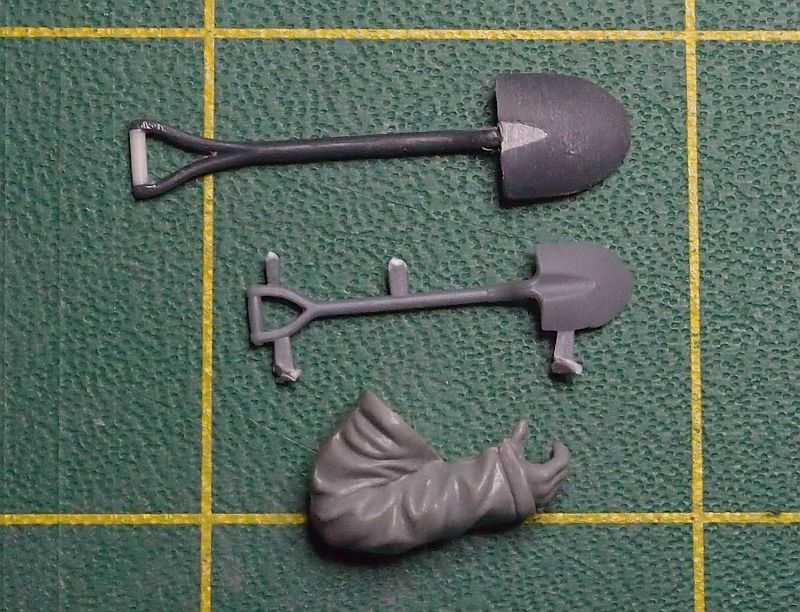 You would have to kneel to use this one.

Haven't even started, got a few other builds to clear off the table first .....

Excuses, excuses,.... that one is my usual one too

REPLY & QUOTE
RobinNilsson (Robin Nilsson) said
Haven't even started, got a few other builds to clear off the table first .....

Number of axles should not be a criterion, the M8 Greyhound is 6x6 and the SD.Kfz.234 is an eight-wheeler. Both are definitely armoured cars.

100% correct. The ADGZ was a 12 wheeled, 8 axle driven vehicle and is certainly an armoured car and a welcome build here.

Clayton's original intention was to keep the vehicles more or less car/light utility/SUV sized but with a main use purpose described as an armoured car overriding this. Hence the ADGZ fitting the bill.

Troop carriers/APC's, specialist vehicles,etc, were to be a subject for a possible future group build.

Okay, the soap box has been put away, back to more important matters - how is everyone's builds going?

REPLY & QUOTE
LikesTanks (Richard Long) said
Number of axles should not be a criterion, the M8 Greyhound is 6x6 and the SD.Kfz.234 is an eight-wheeler. Both are definitely armoured cars.

The campaign rule was for a armor car from any conflict, there is nothing about size limits. 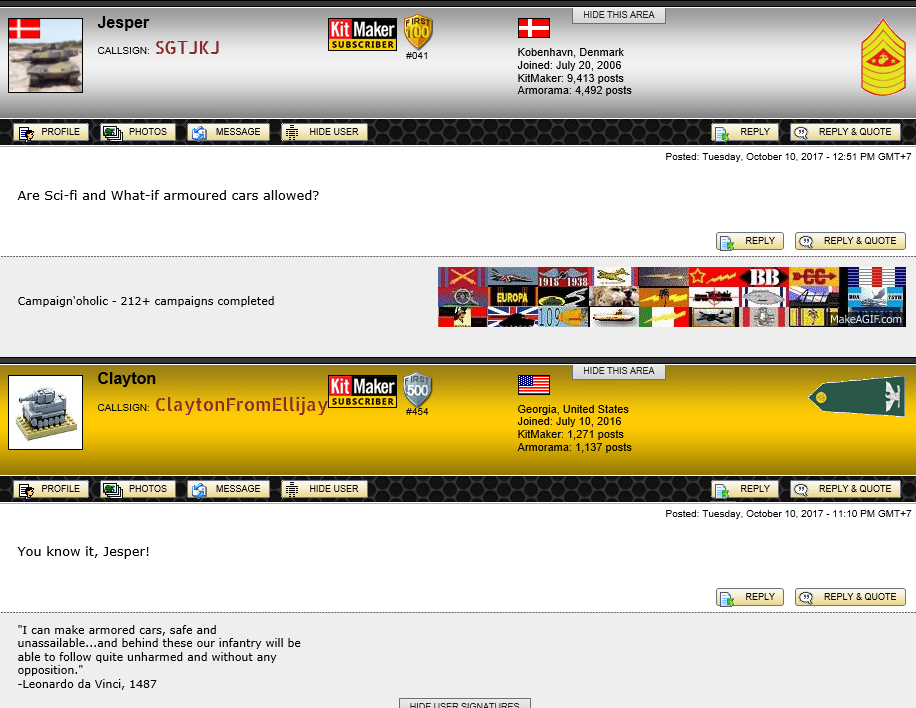 He also made a ruling on vehicle suitability where he accepted a Vodnik as it was less than truck sized. 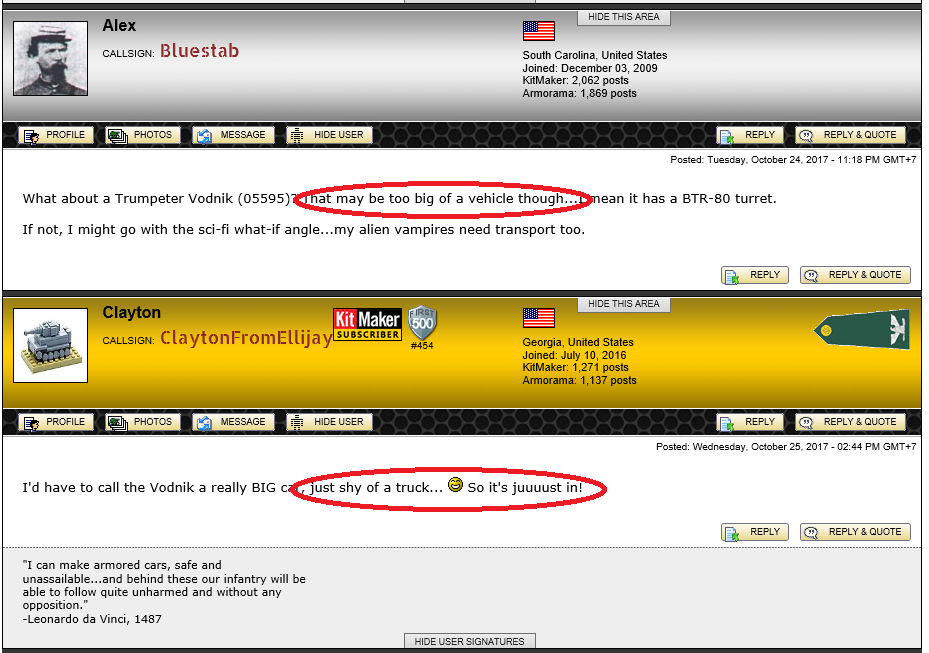 these sections are on page 3

REPLY & QUOTE
petbat (Peter Battle) said
Nathan, that M-H fits perfectly and I would love to see it built. It is a kit I have contemplated buying myself.

Thank you for your understanding as well. Your gracious offer to change your selection is greatly appreciated.

Nice choice, I have never knew about this type of vehicle and that it was developed in South Africa and used against the DAK.

I am happy to withdraw the Kamaz Typhoon and replace it with a kit that better fits the requirements of the campaign. How about a Marmon-Herrington Mk.II? 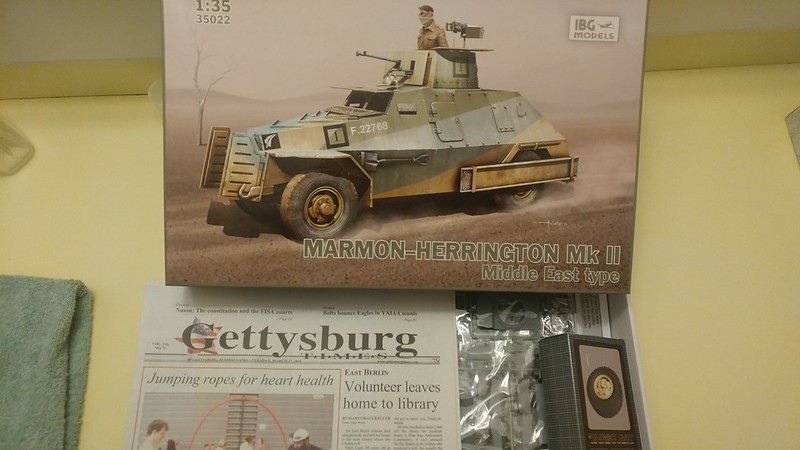 Hi Nathan. There was discussion early on about trying to keep the builds strictly armoured cars and keeping the vehicle smaller than truck size. However, a few people have mentioned intentions of building Stryker and Boxer vehicles, and Clayton not being able to be here to moderate at the time, no comment was made on them. The Stryker is roughly 7m long, the Boxer 8m.

I have since taken up the baton on his behalf, but in keeping with fairness at the delay I have said nothing. So I guess, with that in mind, I'll open it up to the build members to vote on whether they object to the Typhoon at 9m long or not.

My personal preference is to encourage people to join, build, share with other modellers and have fun, as long as you keep relatively within scope of the build. My vote is therefore yes to your choice..

Gentlemen (and any Ladies) speak now or forever hold your peace.


The campaign rule was for a armor car from any conflict, there is nothing about size limits. This Typhoon is classified as a armor vehicle which could also mean a 'car'. I looked up the definition of a car and there is nothing in it that mentions size limitation but it does mention that cars only have two axles.
Has this vehicle been used in a conflict? I don't know. Is it being used in Syria?
I would say it does not meet the first requirement based on the axle limitation.
I feeling is that it does not meet the requirement for a car and should not be in the campaign.
With that said, I agree that we should encourage people to join the campaign and share the fun and would not have a problem being over-ruled on this question.