Early Aviation
Discuss World War I and the early years of aviation thru 1934.
Hosted by Jim Starkweather
1/72 Fokker E.V from Arma Hobby

REPLY & QUOTE
magnusf (Magnus Fridsell) said
Still a bit of detail work to do and some smaller parts to finish. 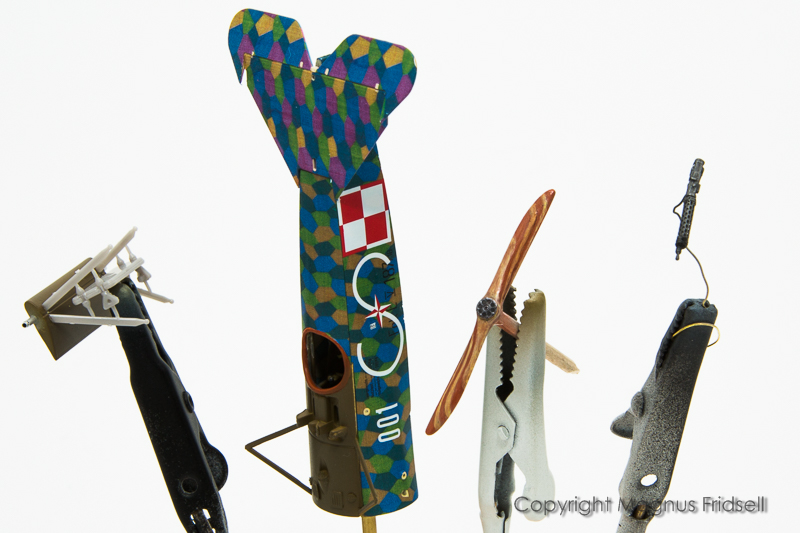 Prop was hand painted using Vallejo "Ice Yellow" over a base of reddish brown MRP, mixed from dark earth, mid stone and a drop of yellow. Touch-up was done using Vallejo "mahogany" and I also used a wash of this paint to dampen the contrasts a bit. A final coat of brush painted Vallejo semi-matte finished the prop. 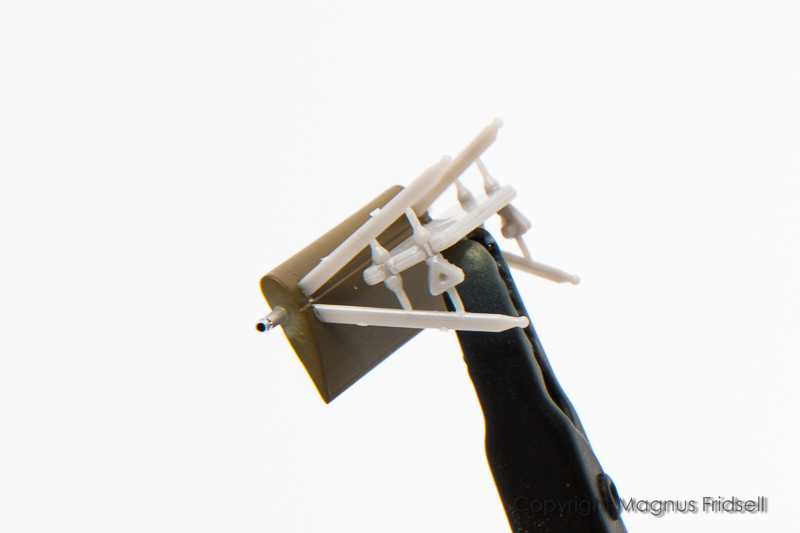 Landing gear struts are attached using a nifty jig that is included with the kit, after the glue has set the jig will be removed before I paint it and attach it to the fuselage. You can also see the custom wheel axles I did since the etched wheels were impossible to fit over the plastic axle stubs.

Meanwhile this is looking great! You're becoming a master of decals!

Very fine work on the way. Pretty good solution with the wheel axles. Gun looks really nice and I love the prop paint. Can't remeber that I saw some woodpaint from you before. Looks experienced. The jig for the struts is a useful gadged, I guess.

REPLY & QUOTE
magnusf (Magnus Fridsell) said
Russell! Thanks a lot! A friend of mine has actually tried dune skiing. Or rather, it was in a gravel-pit here in Sweden so "dune" might not be the correct description

! Anyway, it was fast, way faster than snow. And a LOT harder when he fell

Oliver! I've never done serious wood-graining before. I did however get a lot of help from looking at the prop decals (yep, there is a set of decals included in the kit for the prop's wood effect!). Since I painted Vallejo acrylics over MRP lacquer, if I acted quickly I could wipe off the acrylics and start over again. Regarding the landing gear, I would say close to impossible without some kind of jig. At least for me 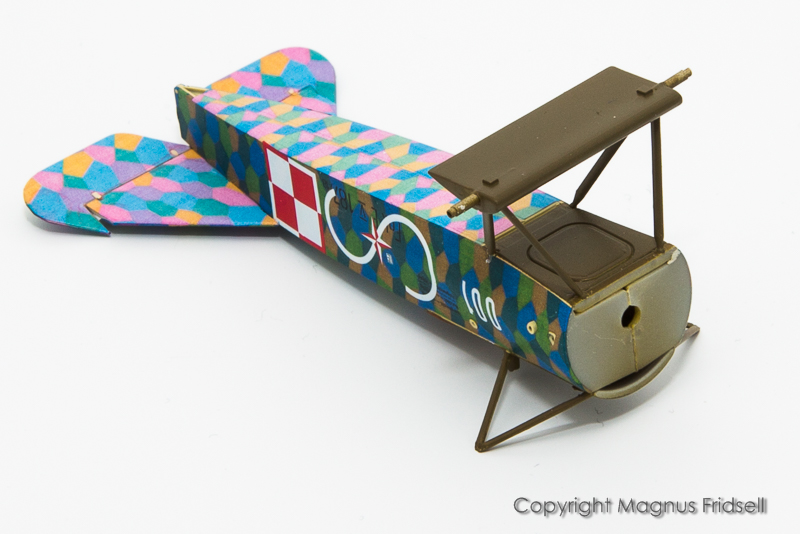 Since last time I've managed to install the landing gear on the fuselage...

...another major worry I finally could put behind me

I will now do some serious dry fitting with the wing and the rest of the struts in order to make sure that everything fits well so that I can do detail work and weathering before final assembly.

for a little kit, there sure is a lot of work in it!

REPLY & QUOTE
magnusf (Magnus Fridsell) said
Friends! Sorry for the delay! The project ground to a halt in mid-March due to work commitments but I'm slowly getting that organised by now.

It's not finished, there is still some final detailing and weathering to do so I'm waiting with the portrait photos until then 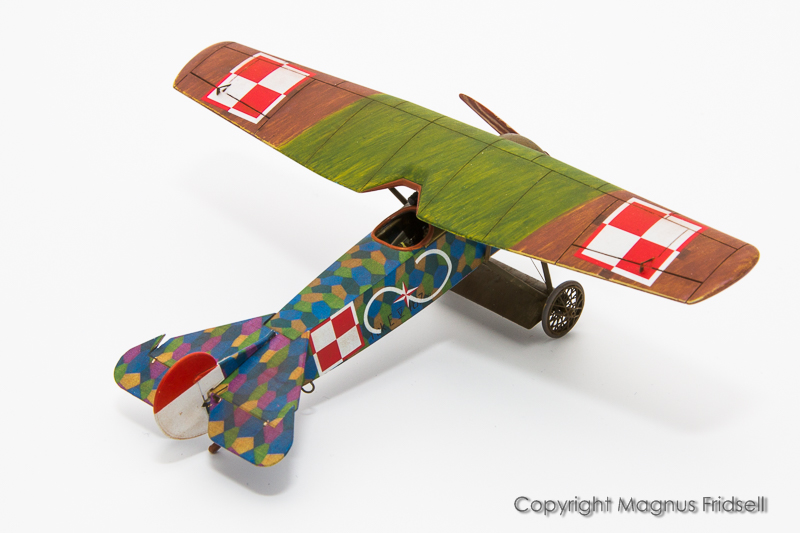 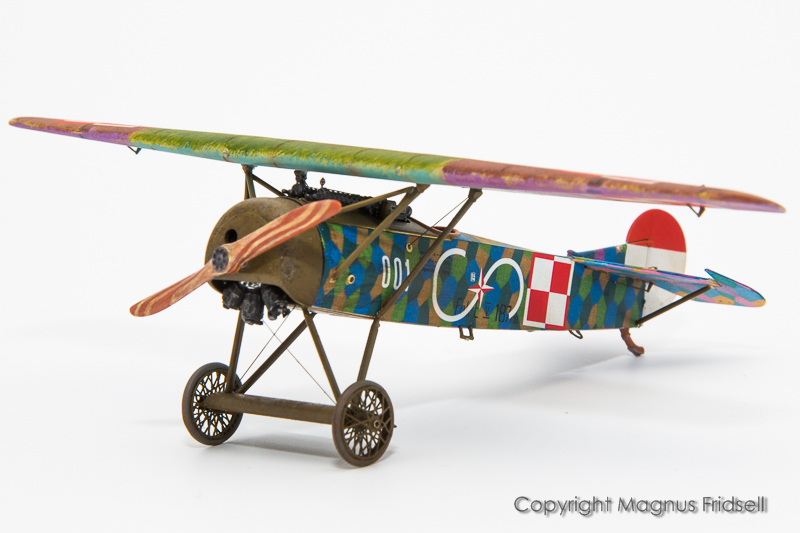 The wing was trickier than I had expected, even if fit is very good some things got a few tenths of a mm off and that is enough for the wing to go on a bit lopsided. With a lot of adjustment and the use of wooden glue it finally turned out OK but I wish I had been still more careful earlier on.

Also, the minimal rigging was more than enough for me

! I can't get the b-y elastic threads to stick! It is immensely tedious and frustrating. I'll find out some other method for the next project that requires rigging...

For rigging I use Ezy line by Red Roo models.

I drill a small (#75) hole in the model and dab a little accelerator in it, then dip the rigging line into medium CA before placing it in the aforementioned hole.

This allows me to rig the models under a slight amount of tension without going bananas trying to hold the line until the CA cures...

REPLY & QUOTE
goodn8 (Thomas A.) said
Looks great and pretty colorful!
The spoked wheels are a real eyecatcher.
I've only done rigging once on my Bristol Bulldog and liked the EZ-Line I used. In 72 it's fiddling whatever you use but it's very helpful.

REPLY & QUOTE
magnusf (Magnus Fridsell) said
Russell and Thomas! Thanks for nothing

! I hoped that you would come up with something else for rigging, it's that b-y Ez-line I've been struggling with all the time

! Well, I'll simply have to stop complaining and do a bit of practice instead...

I put this one on the back burner for a few weeks in order to wait and see what else I wanted to do, I did some additional minor weathering this morning and installed a windscreen and decided to call it a day then! 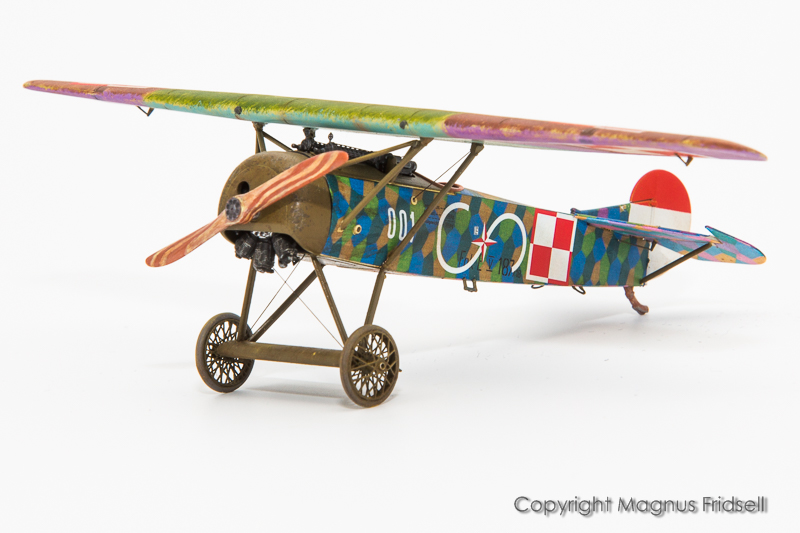 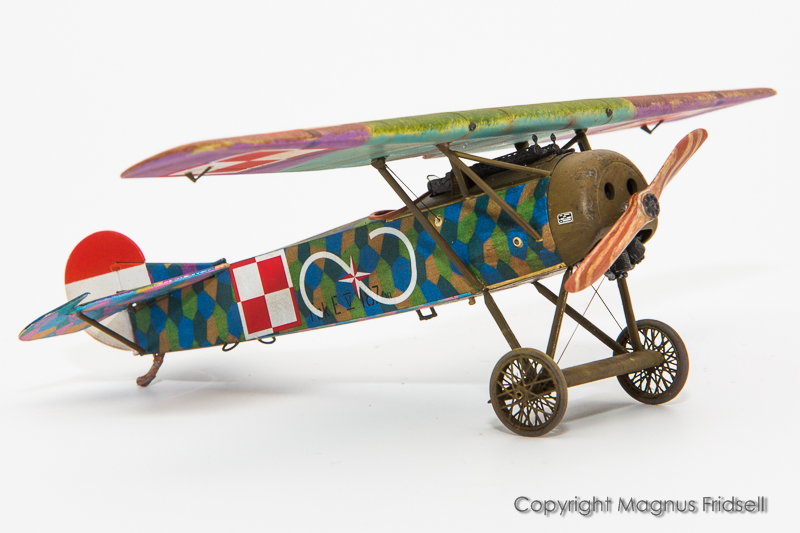 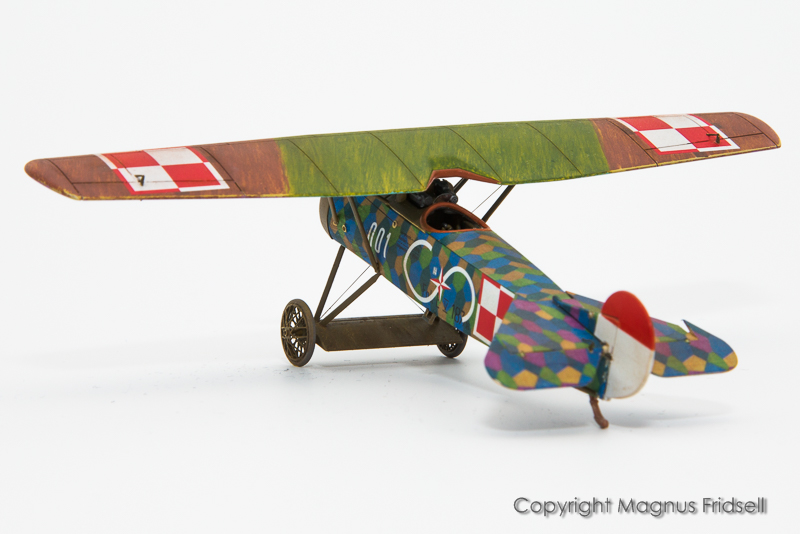 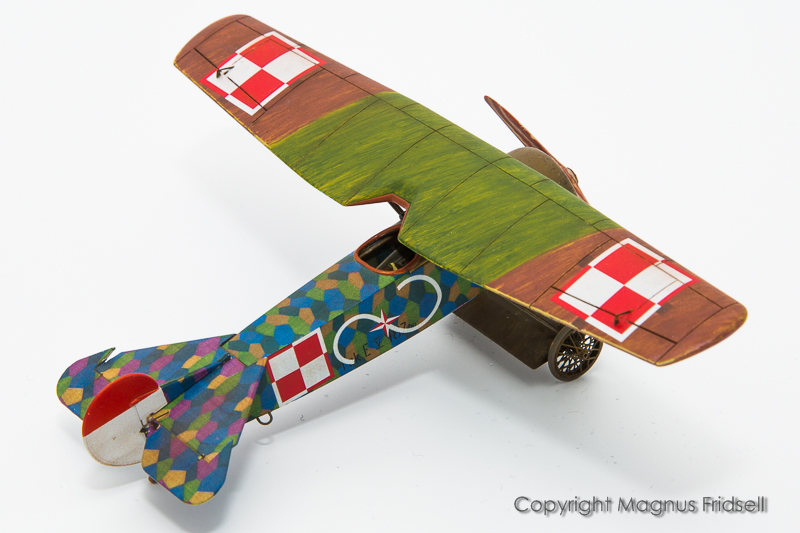 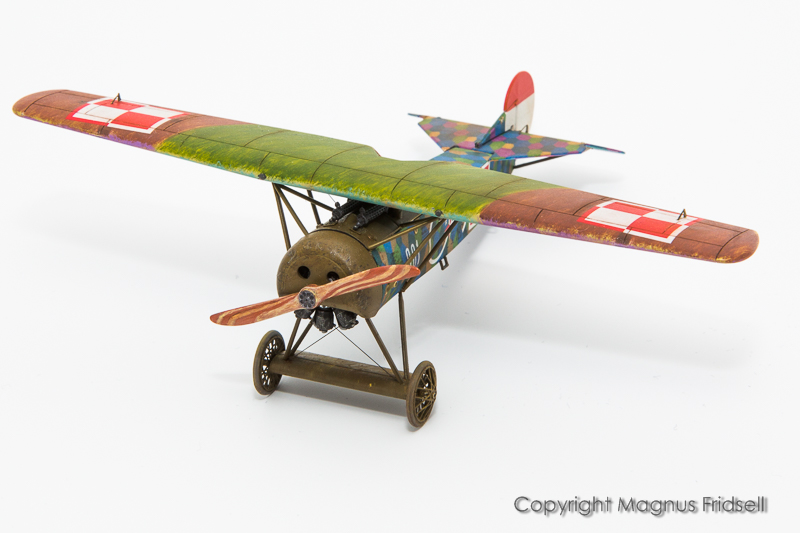 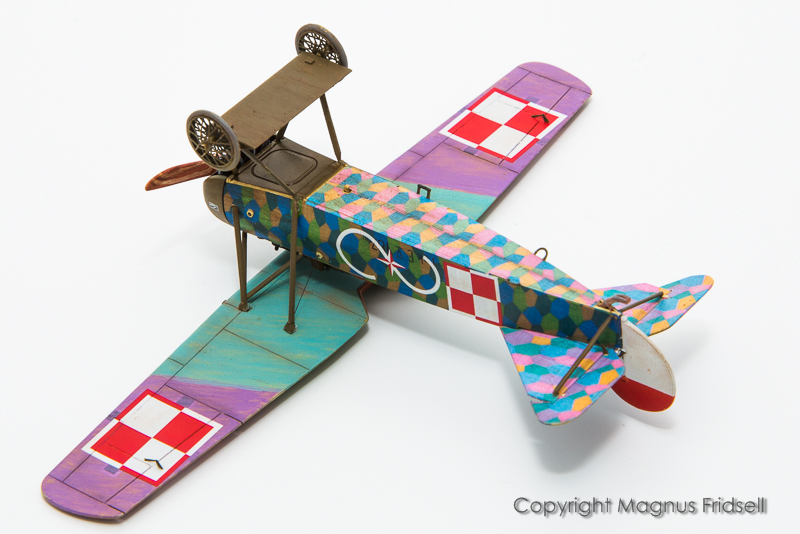 This is a very neat little kit, just like the two earlier Arma Hobby kits I've built. Take care when assembling it and it should be a reasonably simple build, especially considering it's generally rather spindly appearance. Also, the marking options are all both interesting and very attractive and if picking the right one (not the one that I did

) you will even be avoiding the spoked wheels!

It has now found a good home in the collection!

Russell and Thomas! Thanks for nothing

! I hoped that you would come up with something else for rigging, it's that b-y Ez-line I've been struggling with all the time

! Well, I'll simply have to stop complaining and do a bit of practice instead...

once you get your technique down, it's by far the best and easiest I've found for rigging

Your EV's looking great and those wheels are just amazing!