You are viewing the archived version of the site. Go to forums.kitmaker.net for info on latest news and other content.
main () P-47 Modelling

REPLY & QUOTE
AussieReg (Damian Rigby) said
I laid down a couple of good coats of Testors Dullcote tonight to lock in the paint and PLW, next up is some light sponge chipping on the wing roots and leading edges. 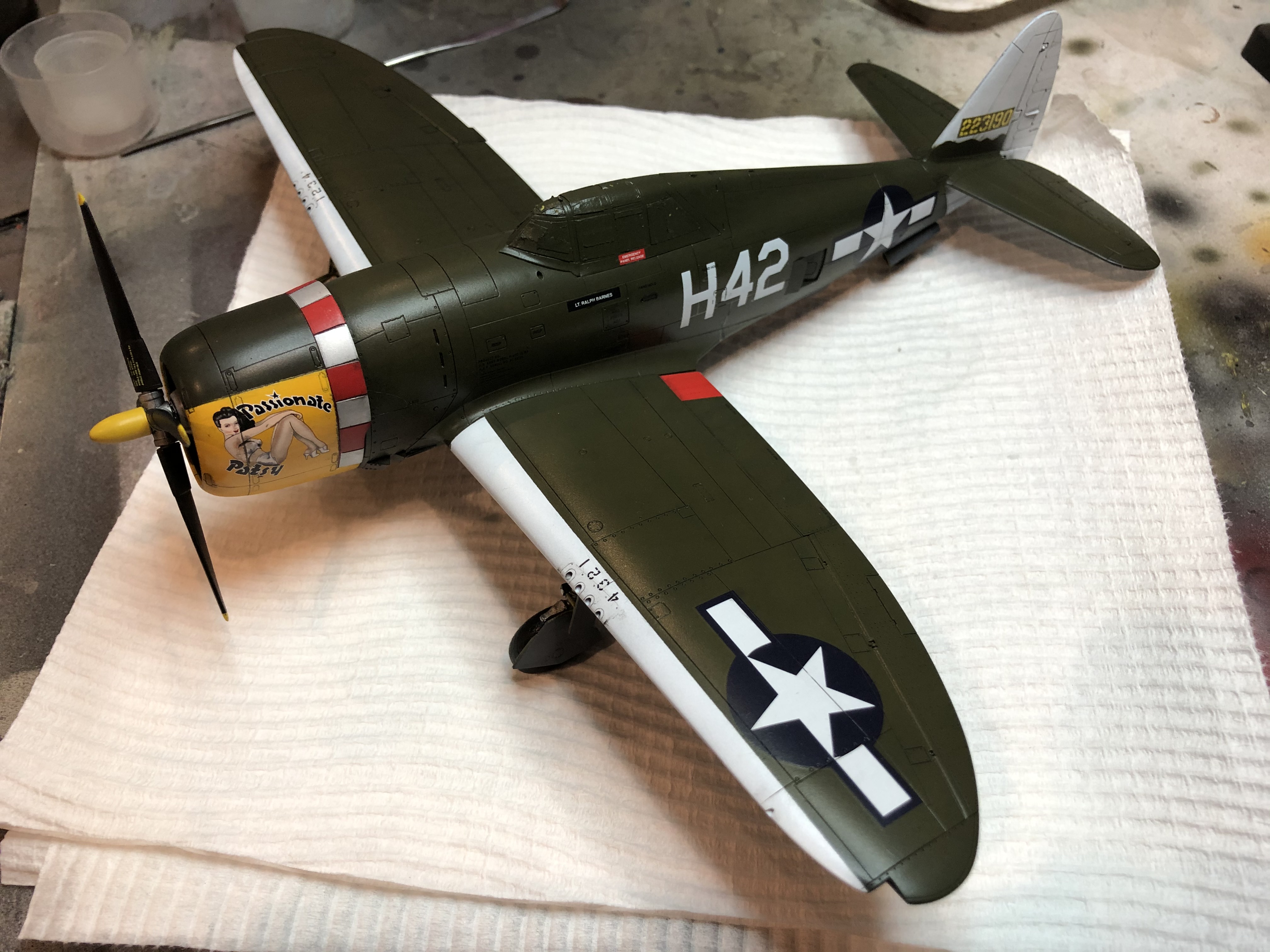 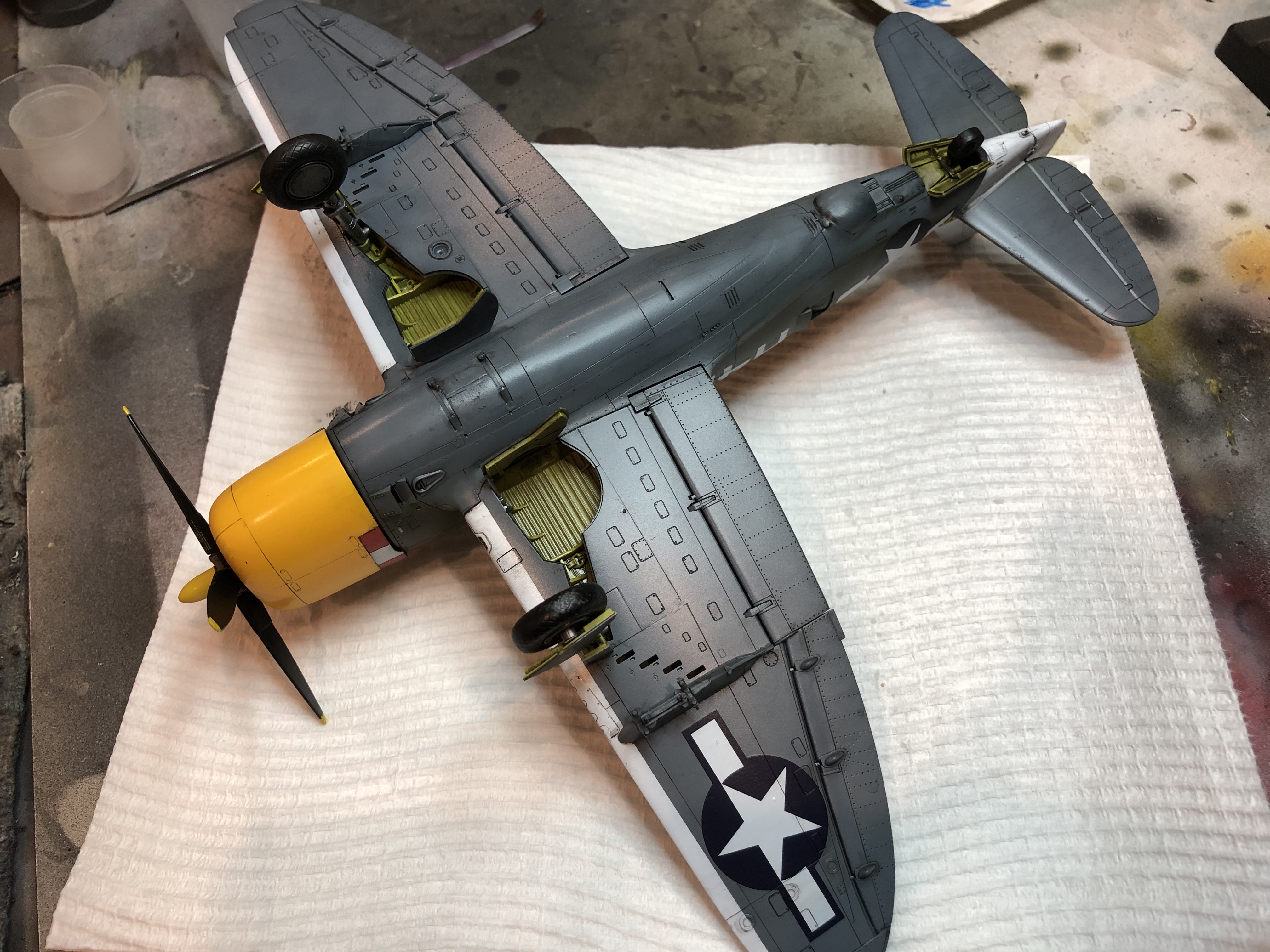 REPLY & QUOTE
AussieReg (Damian Rigby) said
The final small parts have been added (blast tubes, pitot, antenna, clear wingtip lights). I had a bit of a play with a Burnt Umber oil filter over the sponge chipping. Not sure if I like it or not. I will give it a day or so to cure and have another look, then if I'm not happy I will reduce it a bit with some White Spirits.

A couple of small detail paint touch-ups to do then we're done. 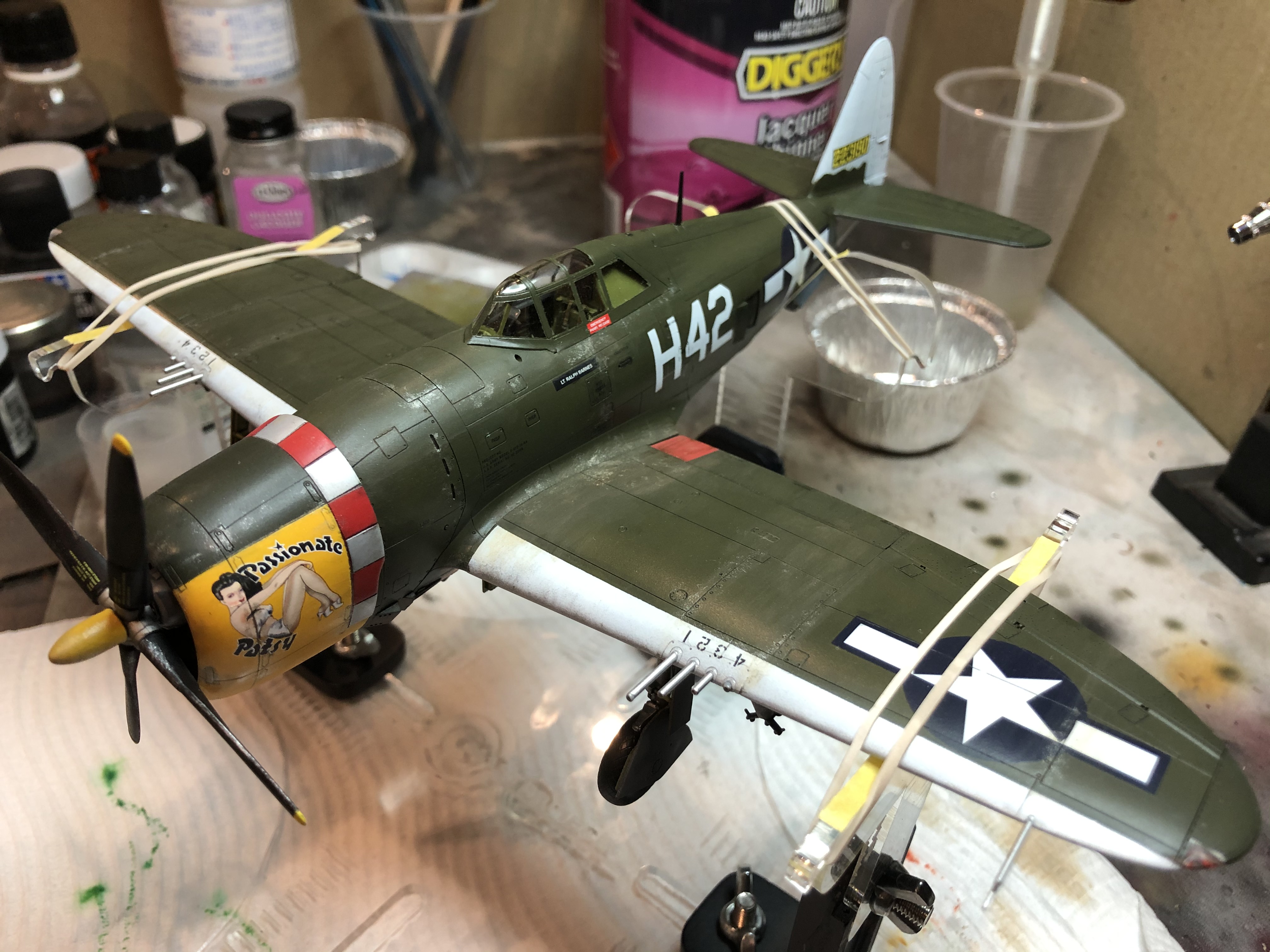 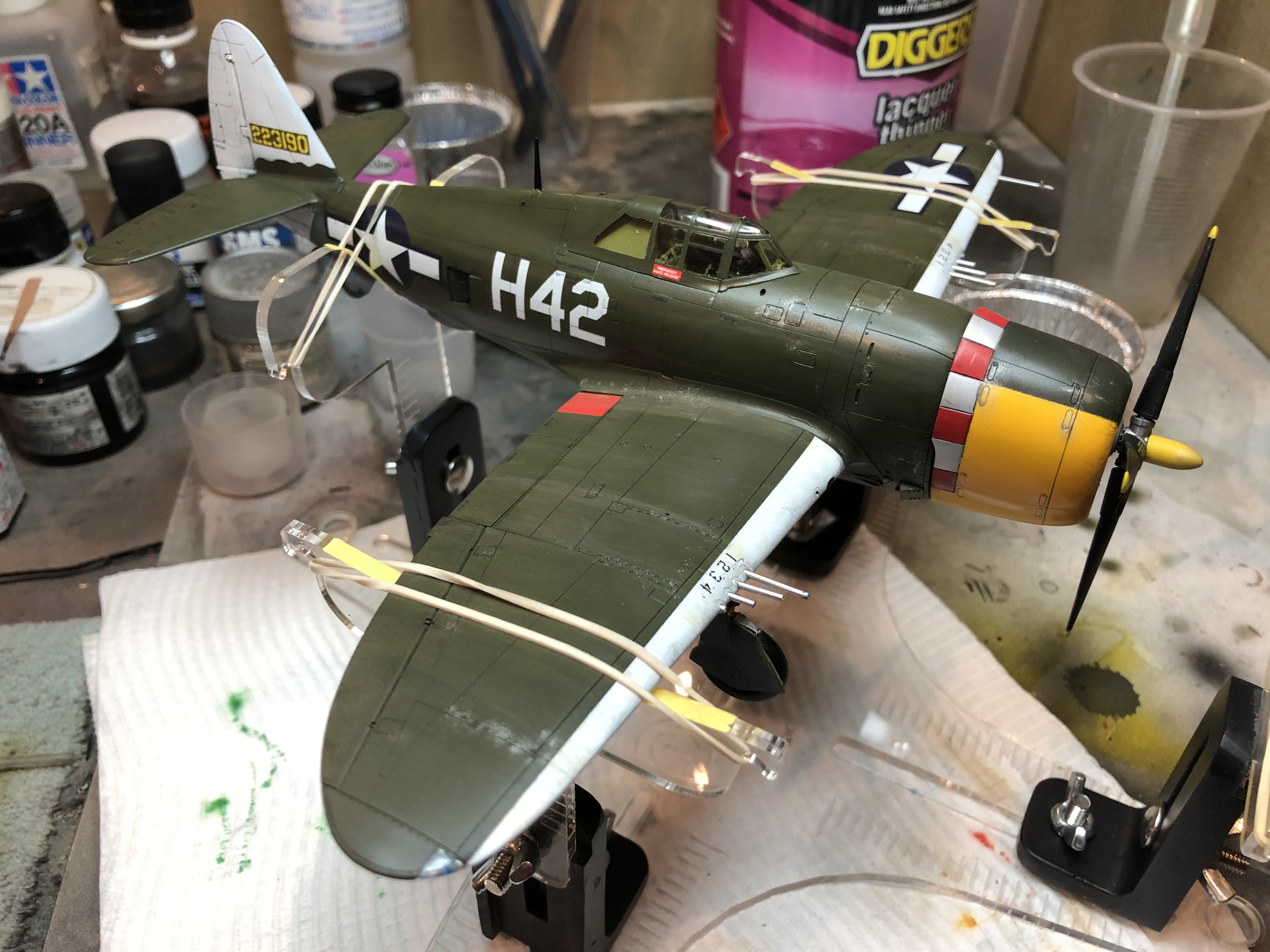 D., yours is coming along nicely. I see that you are doing this in USAAF markings. Did the RAAF ever use Thunderbolts?

D., yours is coming along nicely. I see that you are doing this in USAAF markings. Did the RAAF ever use Thunderbolts?


Thanks Jim. Unfortunately we didn't get our own Jugs, the closest we got was the P-43 Lancer (and only 8 of those). Quite a few were shipped and assembled here (in Brisbane) for PTO use. I have a project in mind to build a CAC Boomerang in 1/48 scale, and a 1/48 P-47 Razorback using exactly the same colours and markings, as a "What If"/"If Only" display.

There is a great summary HERE of the aircraft types and quantities used by the RAAF in WWII. 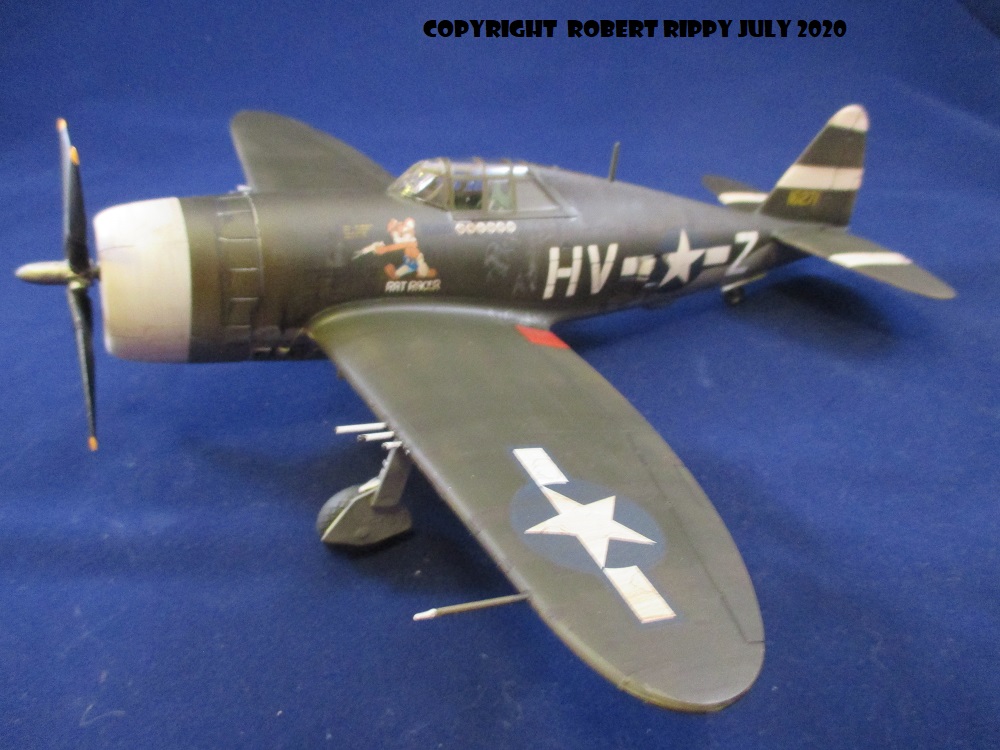 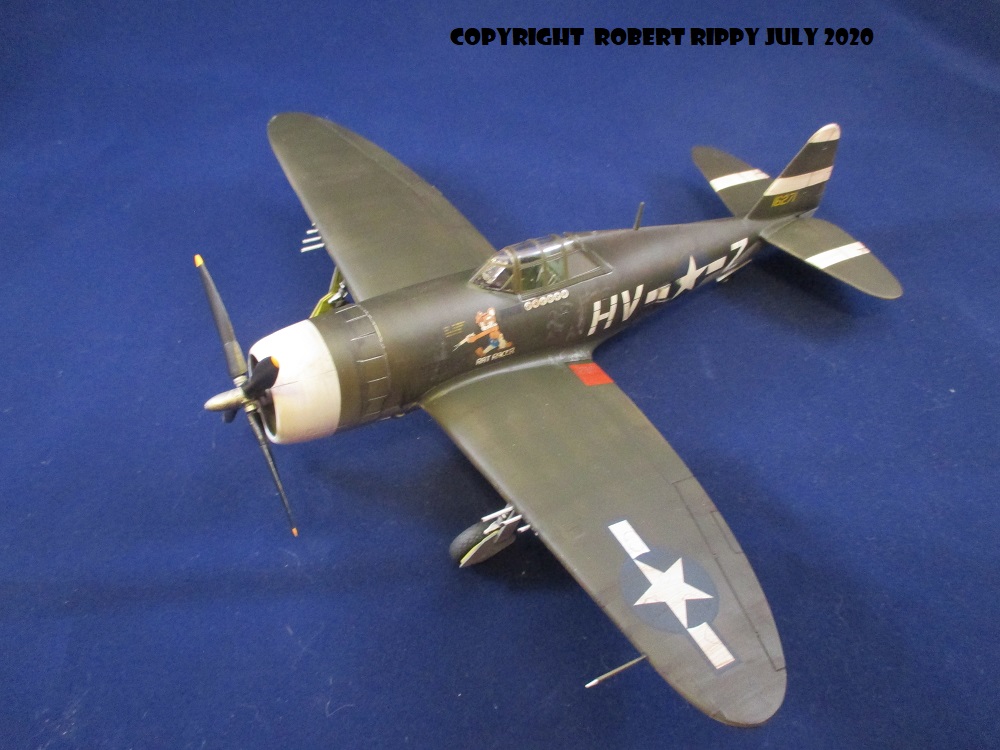 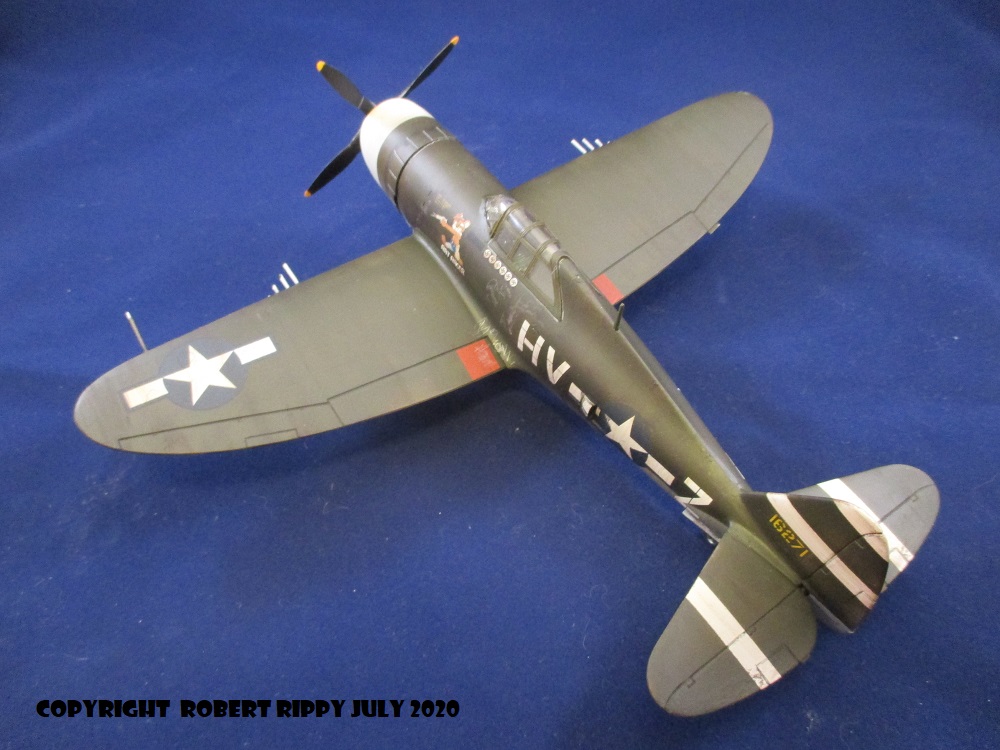 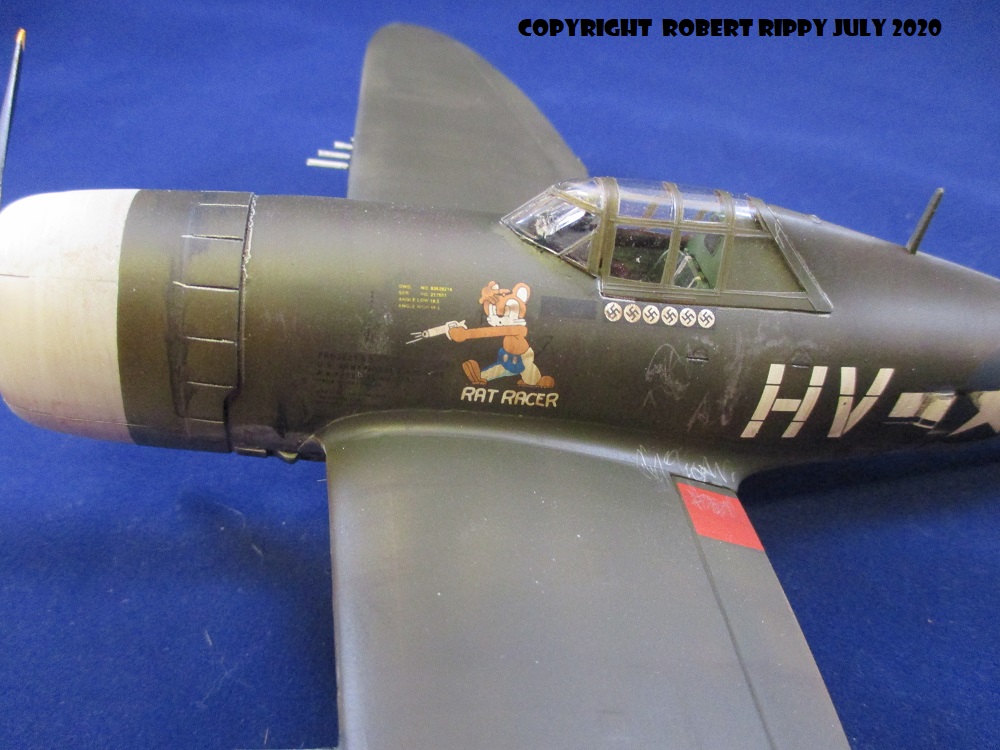 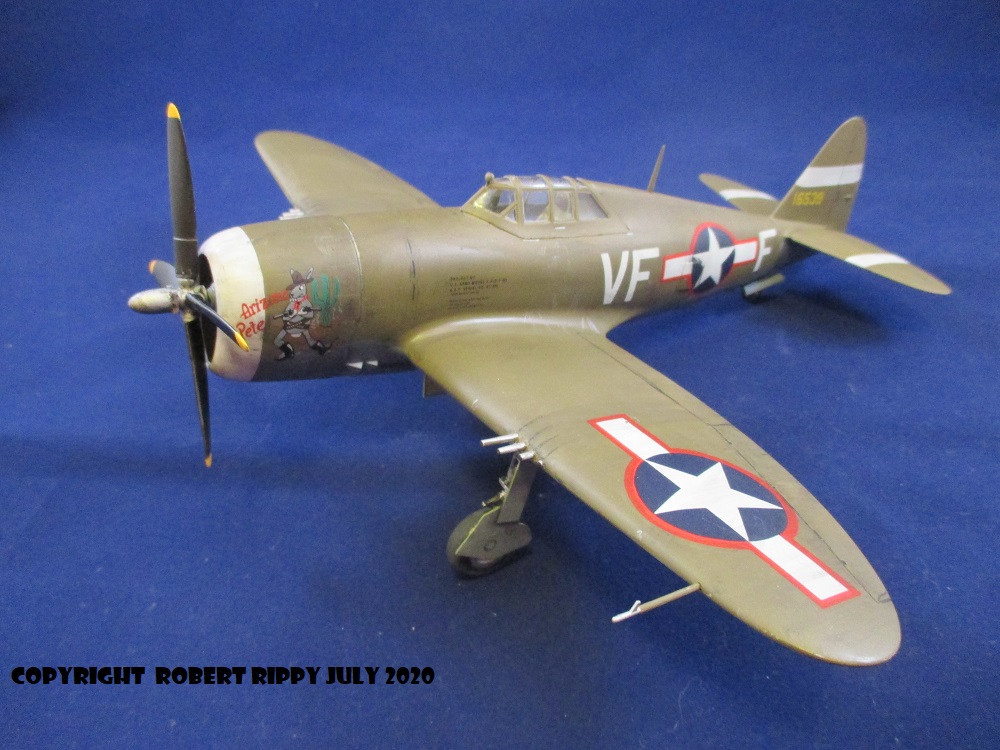 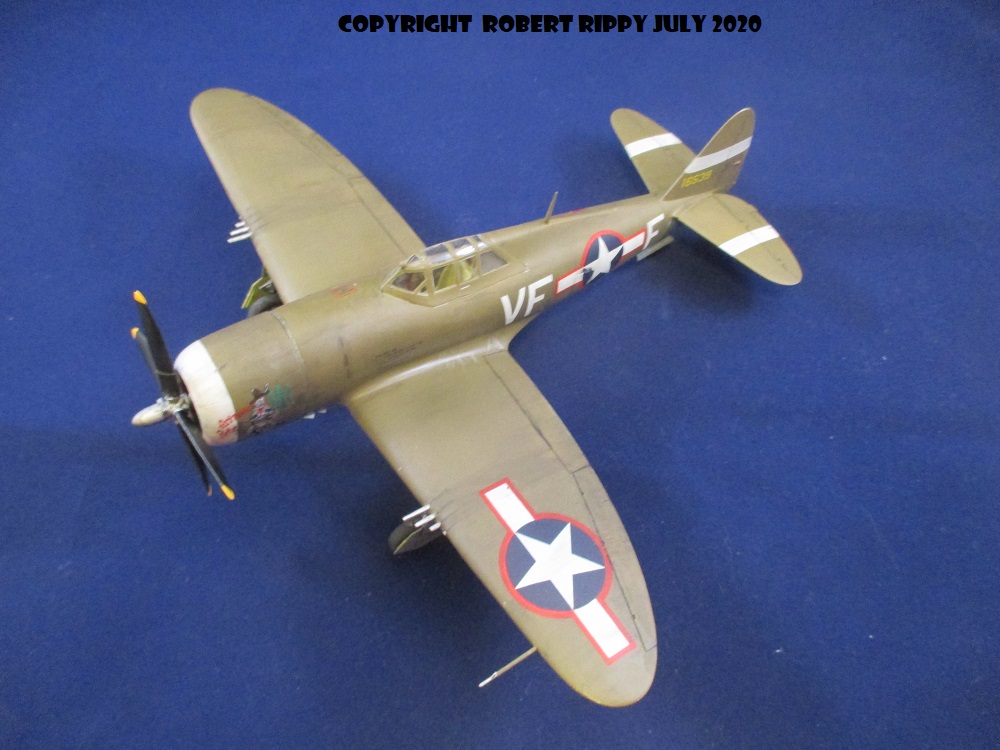 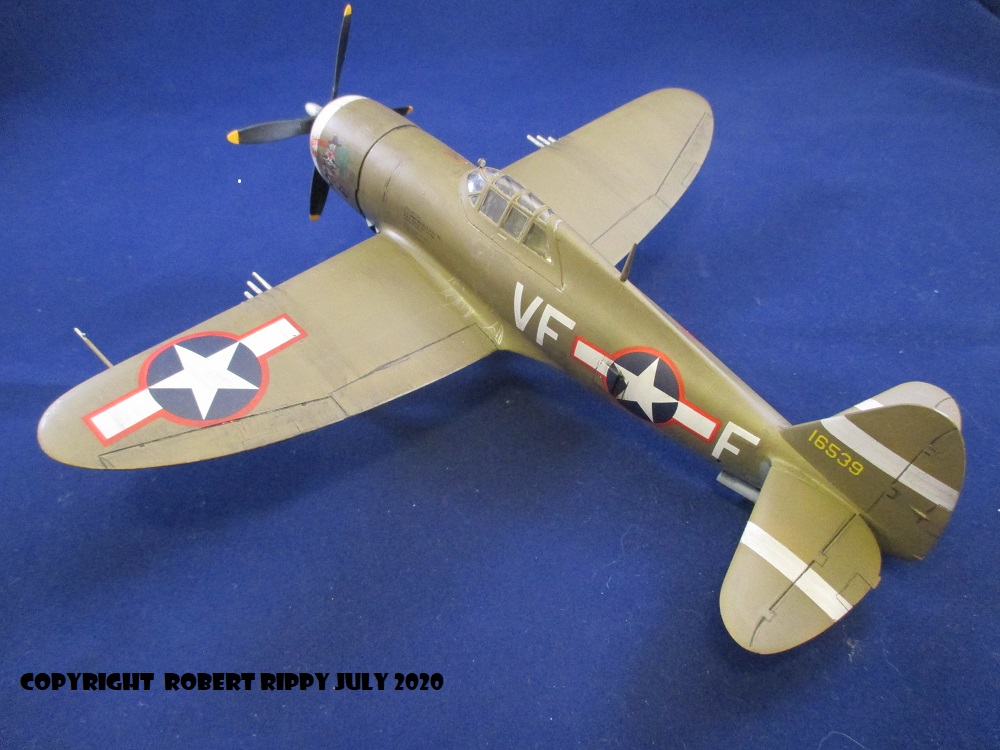 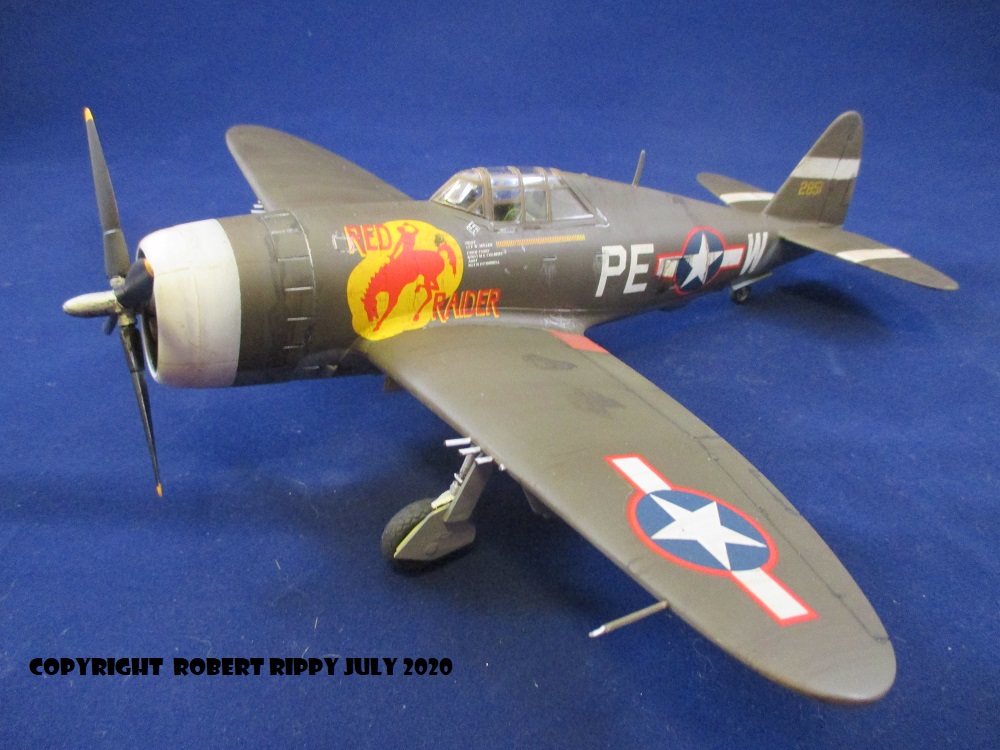 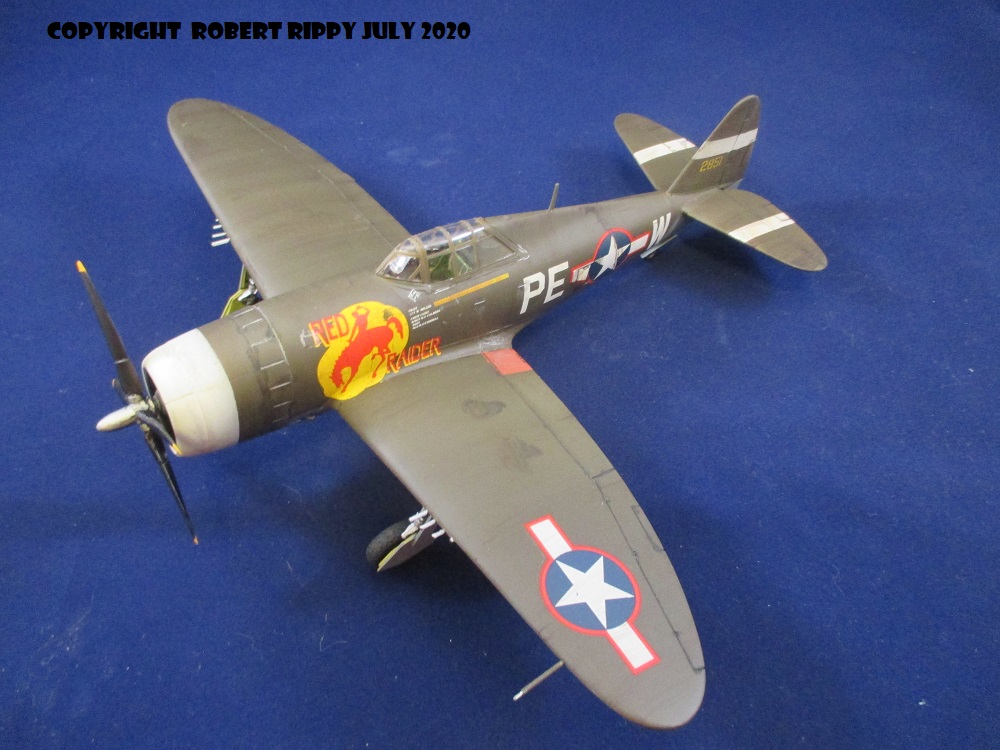 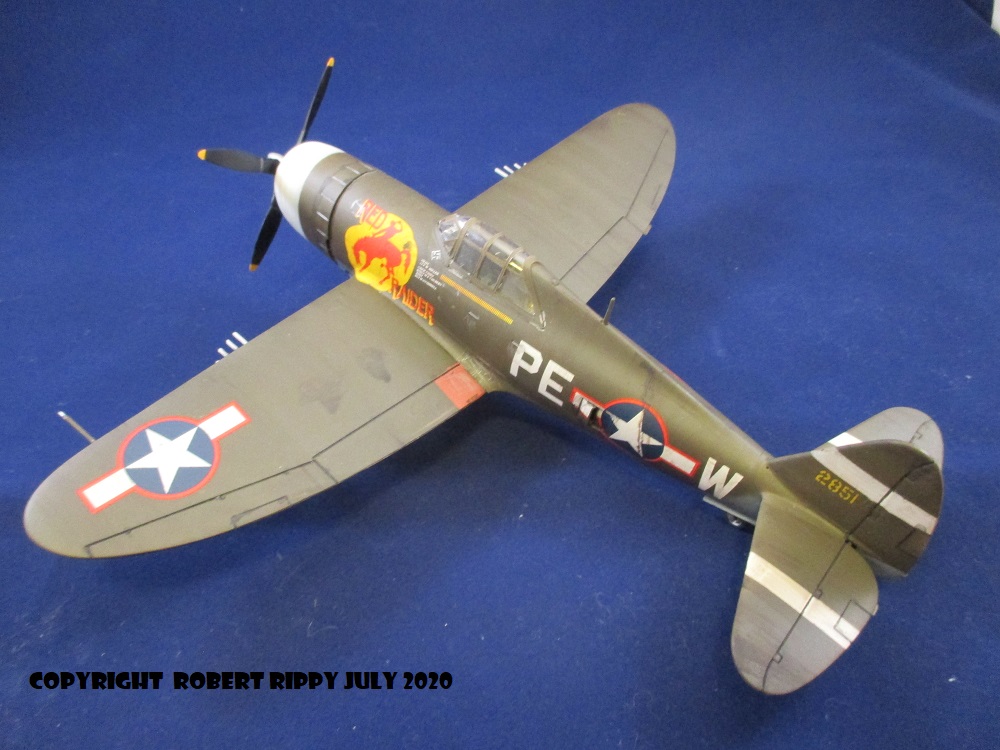 REPLY & QUOTE
jimb (James Bongiovanni) said
Bob, great looking Thunderbolts. I like how they came out.

D., thanks for the info on the RAAF aircraft. I'd heard about the CAC Boomerang (how Australian is that name!), and it seems like a pretty good aircraft.

I actually didn't realize that this was a Campaign. I just uploaded a photo of my 1/144 Thunderbolt to the Campaign gallery; however, since I built the same kit for "Those Radial Engine Fighters" Campaign, I understand if it doesn't officially count. 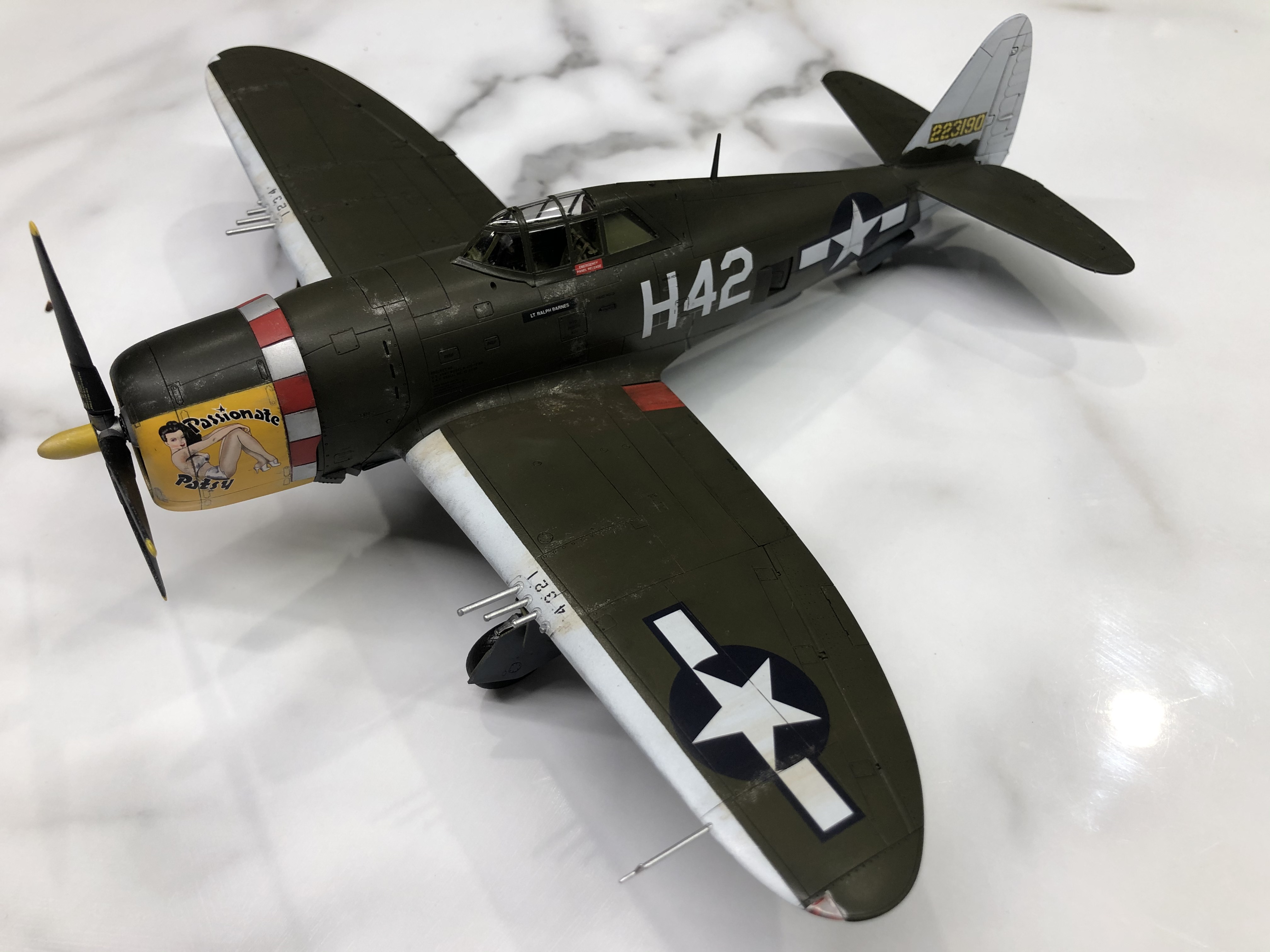 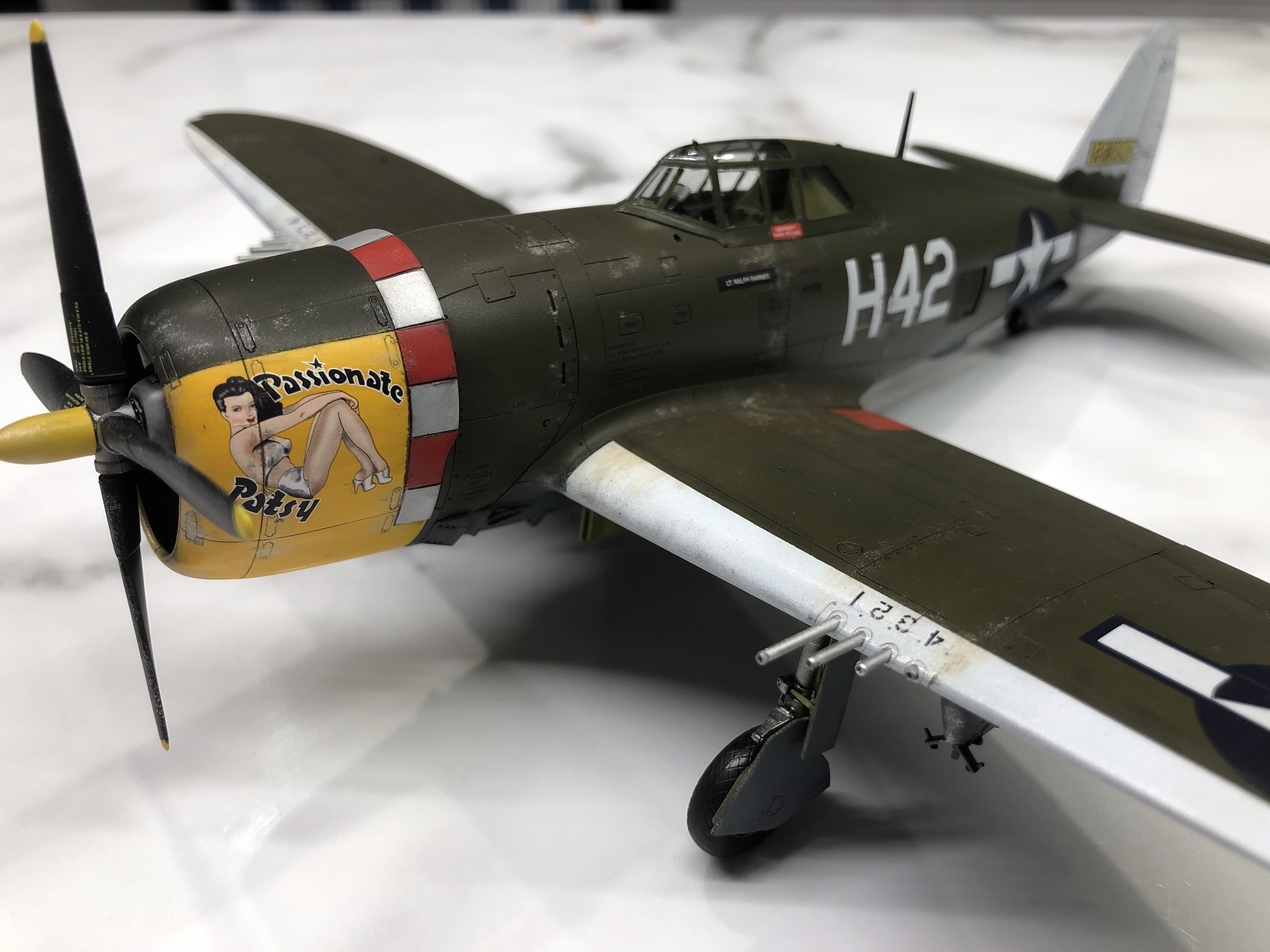 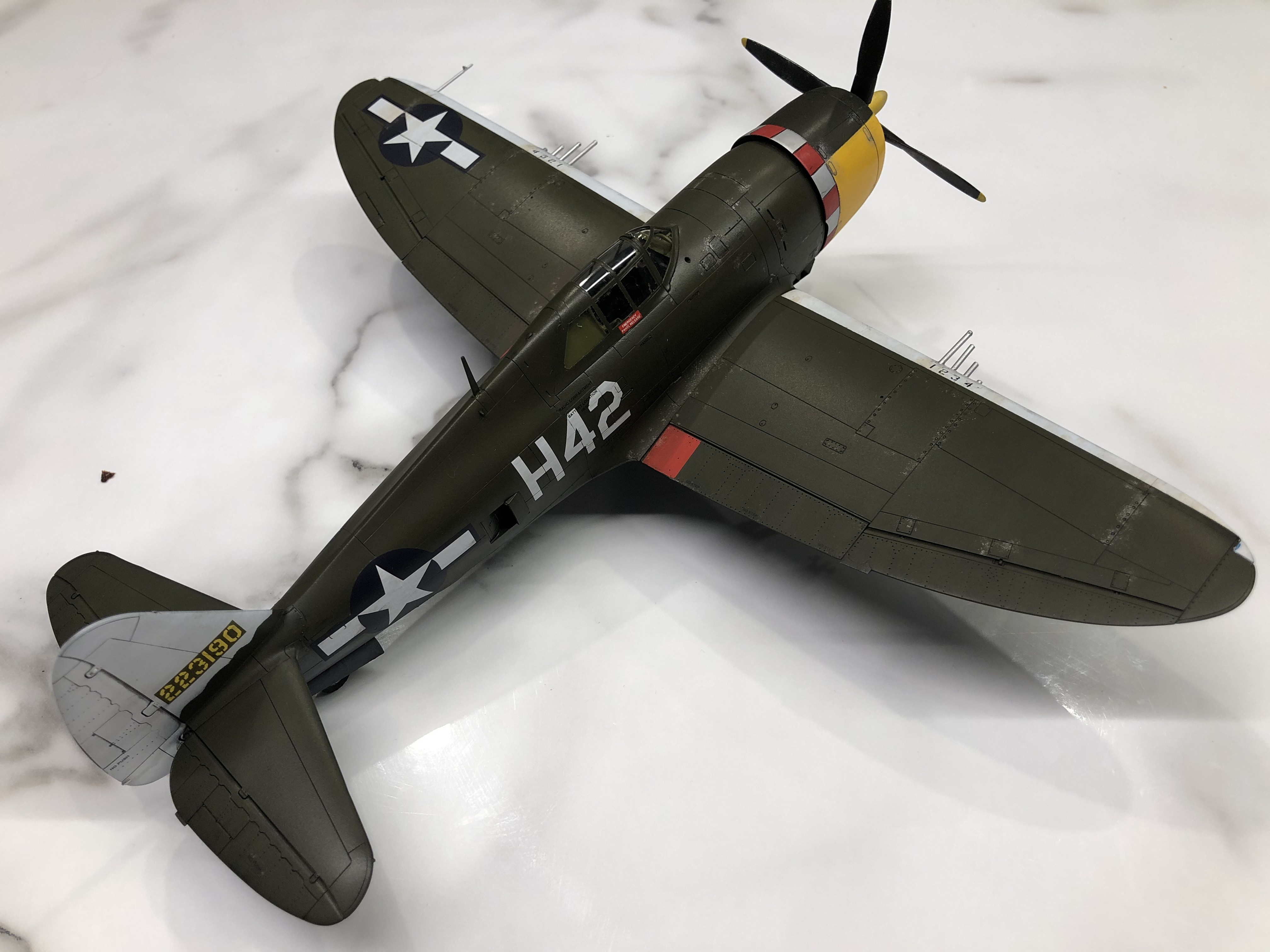 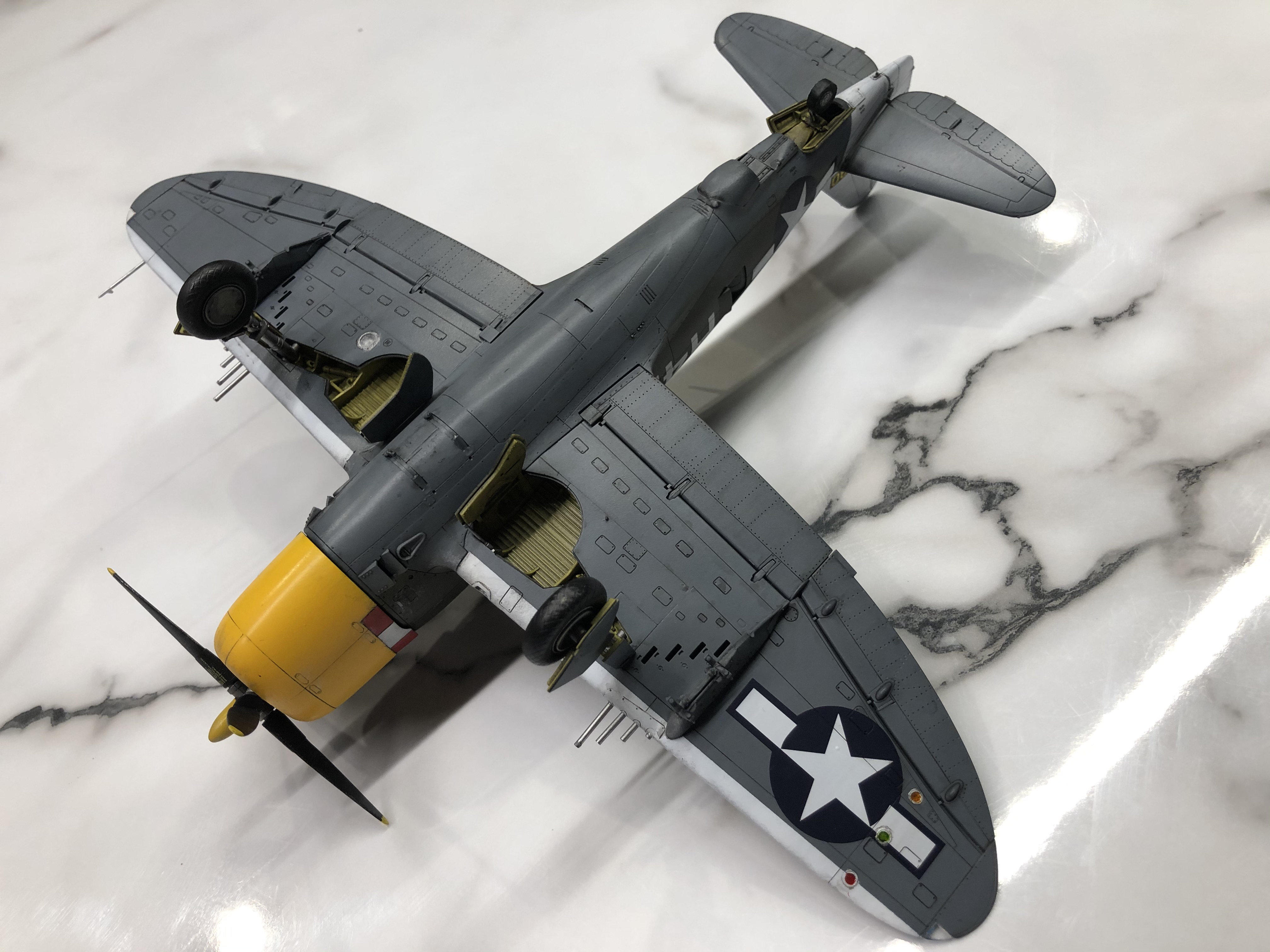 REPLY & QUOTE
jimb (James Bongiovanni) said
Excellent work on the Jug, D. I like it!

REPLY & QUOTE
Bigrip74 (Bob R.) said
D. your 47 looks really good, how did you get the canopy to look so crystal clear.

D. your 47 looks really good, how did you get the canopy to look so crystal clear.

Thanks Bob! I might go back to this one a bit later and do some more weathering work with oils and pastels, but for now it's on the shelf and I will move on to other builds.

The canopy got no treatment at all, it's just the quality of the Tamiya clear parts. I set it in place with TET once the fuselage was closed up, then carefully masked it up and it stayed that way through the rest of the build. I think just protecting it from scuffs and scratches makes a big difference.

REPLY & QUOTE
Bigrip74 (Bob R.) said
Looks, like I need to start purchasing Tamiya kits instead of the low dollar stuff I buy.

It's been a while since I've made an update, and with the clock ticking, here it is!

First, I'd like to mention that it's great to see the finished jugs finally making it into the gallery, I was getting a little worried (Nigel, looking forward to seeing your completed build here too). Second, we've got some really nice builds that have happened here! Bob, nice finish on the older kits, D, nice finish!

So, I left off with two arframes, a -C-2-RE, and a -D-25-RE. I put a bit more focus onto the C variant, mostly due to the Loon models resin cowl, which did a pretty darned good job. A product worth the cost. It is a drop fit, and on my sample very little cleanup was needed.

I did notice an oddity on both of my builds. I've built the D-25 twice before, and noticed an odd sink on the C. I also looked at the D that I'm constructing and it too had the same sink marks. My guess is the molds are showing their wear, as my earlier builds were from earlier presses.

One can see the sink mark on the port wing. This matches the landing gear bay molded on the inside. Just something to note. I went about two ways to remove these, on the port side I sanded it down no problem, though the starboard side was a bit more stubborn, so I used some Mr. Surfacer 1000. Problem solved.

At about this time I switched over to the -D, as my wife wanted me to build it. Happy wife, happy life! How could I say no? Once the cockpit was painted, the build went very fast.

Two hours later, I had an airframe!

Next, I went ahead and masked the canopy's and prepared for the black basing.

I gave the Mr. Surfacer a wipe of an old cotton shirt and it looked great! Then was time to add some white for the ID bands worn by the earlier birds to distinguish themselves from the Fw-190's in theater.

I almost goofed on the fin's band width, fortunately, I had a superb reference at my fingertips! Yes Nigel, that would be your book! Thank you!

I was also able to lay down some Alclad II Airframe Aluminum to the -D. Both were coming along good, though the Alclad gave me a bit of trouble that I'm attributing to environmental issues, high humidity, heat and a lot rainy days.

At this point the -C was moving along quite nicely!

For practical purposes, I chose to focus on the -C. I have begun the decaling process, and will admit the SuperScale set for Rat Racer, is not behaving very nicely. I'm slugging through and am confident that at the end of the day all will be well.

Stay safe and have fun!!

Great to see progress made on your duo John, nice work!

D. stated what I wanted to say John. Great work so far.

I'll add photos to gallery next. Thanks for the campaign. Hasegawa's 1/32 planes are fun to build with good balance between level of detail and complexity of the kit. (This was Eduard kit with Hasegawa plastic, Eduard add-ons and decals.)

REPLY & QUOTE
AussieReg (Damian Rigby) said
Very nice looking build there Pasi, great job! How was the fit of the kit, any difficulties along the build?

There were minor fit issues in wing to fuselage joint and flaps were bit too wide when PE end plates were glued. Wing tank supports (small inverted V's) didn't seem to fit, so had make replacements. But otherwise no issues with the kit. 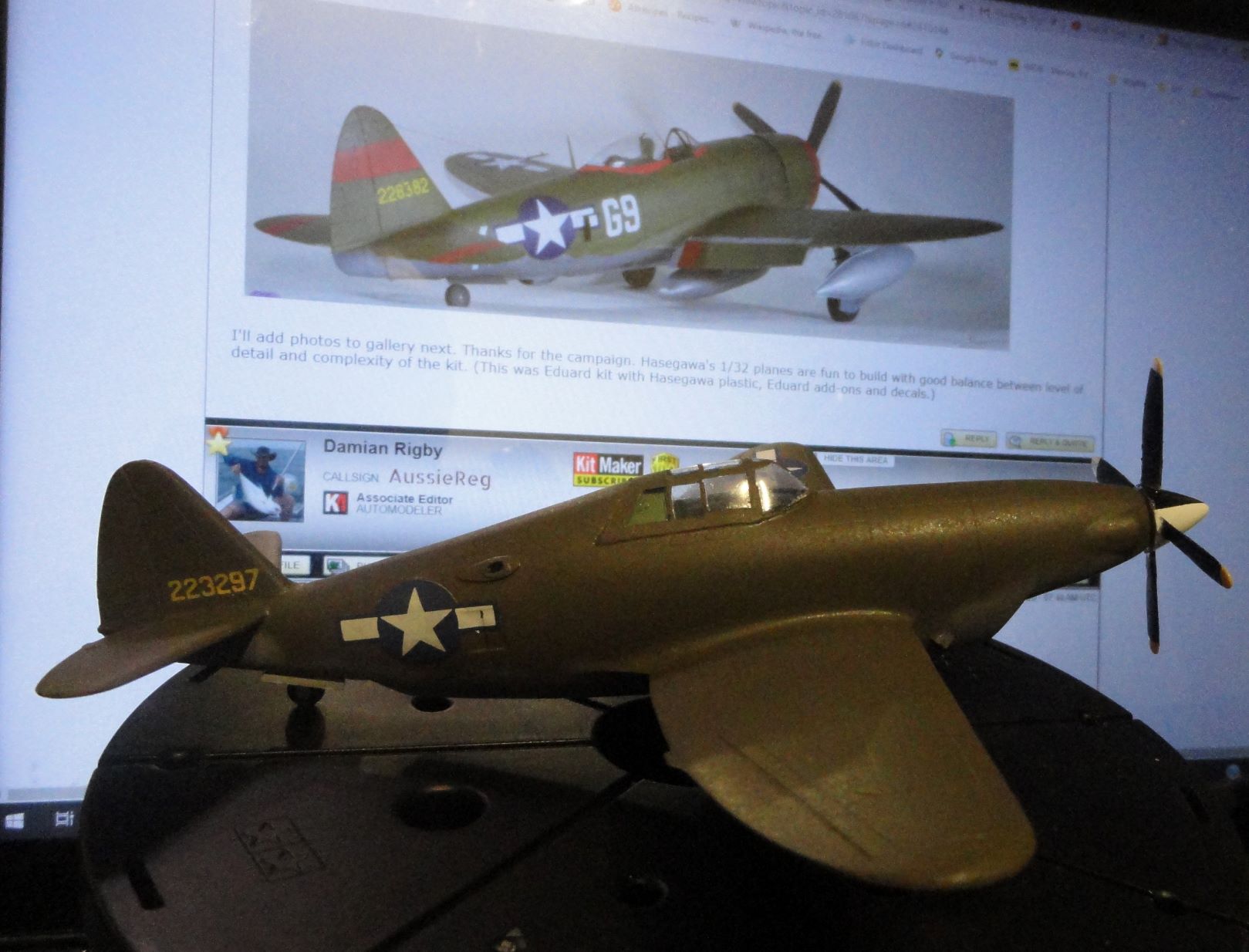 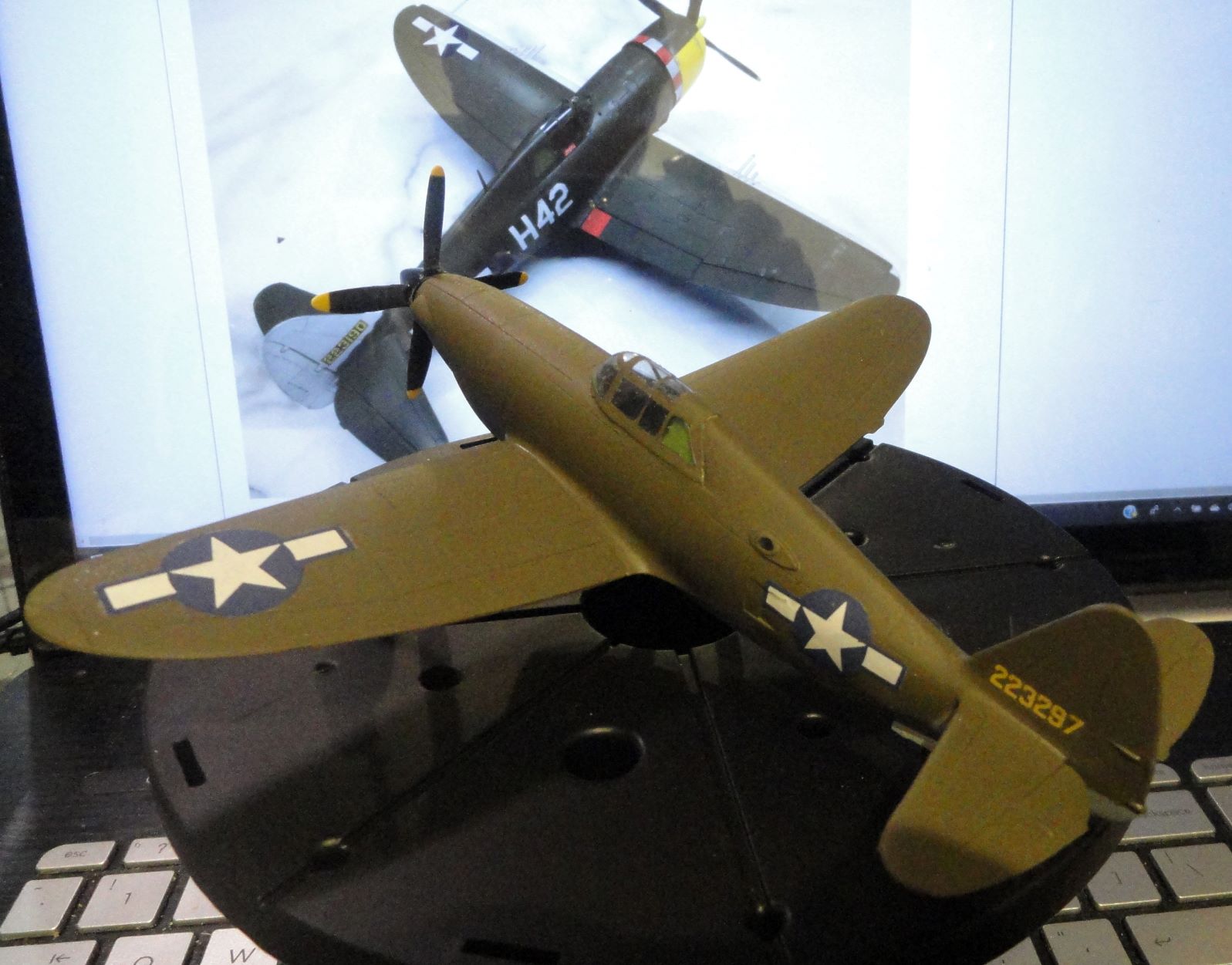 Quite the challenge, I think I did OK, learned a bit and and tried a couple of new techniques. 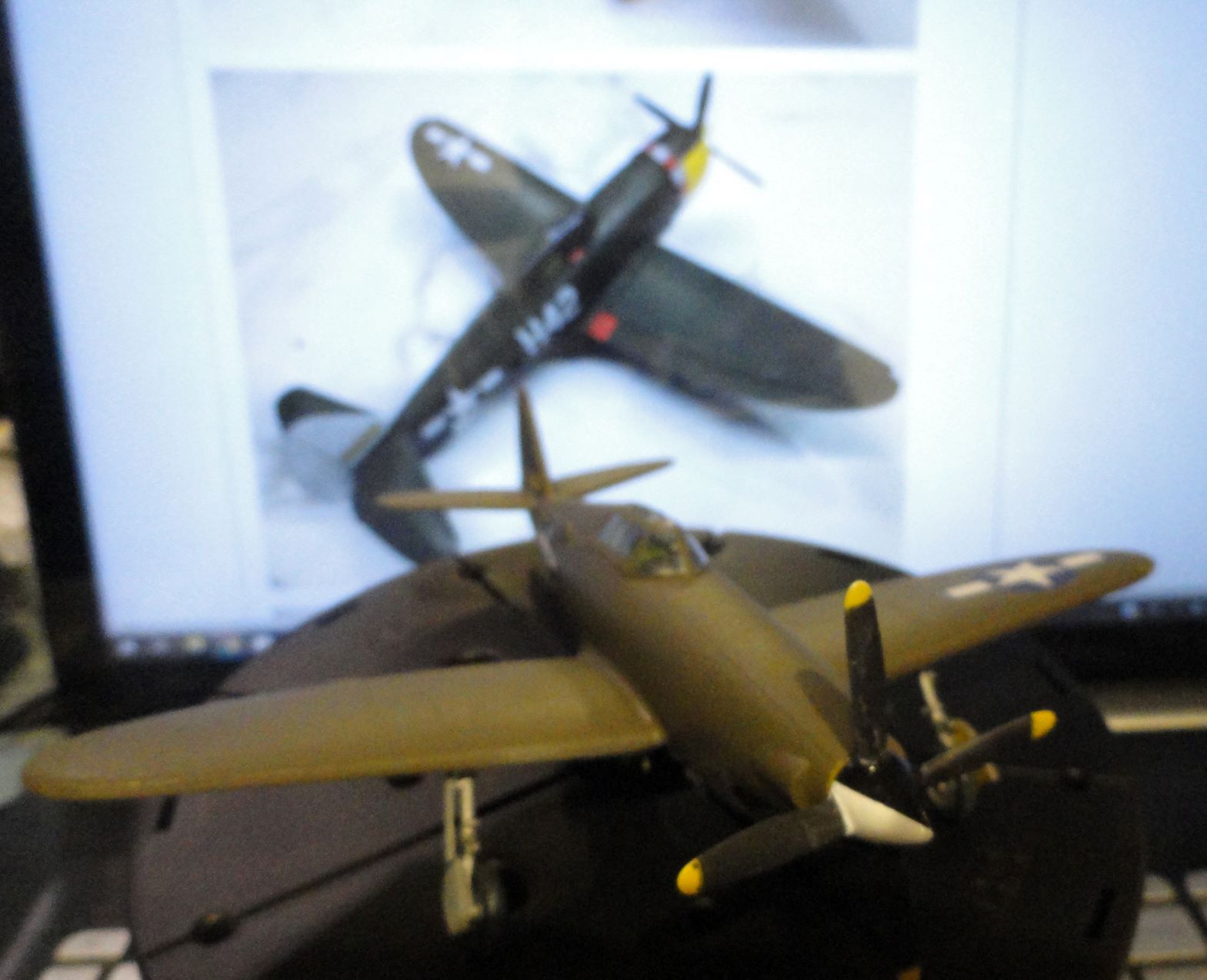 Off to the galleries!

REPLY & QUOTE
AussieReg (Damian Rigby) said
That's a wild looking Razorback Mark, I would love to get hold of a 1/48 version! Very nice work on a tough kit.

REPLY & QUOTE
md72 (Mark Doremus) said
Lots of luck on the 1/48. Looks like there's a couple vac options and a resin conversion out there.

Winding this one down, and yes it was me that asked for the extension, I think it helped get a couple more over the line!

So I split the dual build when I suffered a NMF issue on the D-25. This was a bit of a surprise as I've not encountered this with Alclad II before. My guess is environmental issues here. This caused me to shift gears.

I stripped the port wing clean, a side note, one can see how lacquer based paints actually incorporate themselves into the plastic.

At this point I abandoned the overall NMF, and decided to do Capt. Russell Westfall's "Animosa II" (which is actually Animosa III). Taking what remained of my homebrewed RAF dark green from my B-25 build, I shot the uppers.

I then followed this with an olive drab anti-glare panel in front and behind the cockpit, as well as NMF for the nose art.

Then I went ahead and decaled it using the Superscale set, and the Tamiya ensignia and stripes. Turned out ok I think.

Given the timing, and having enjoyed the results from using oils on my B-17 to weather, and seeing an additional photo reference, I'm going to take a bit of time to finish this one up right. So she'll be seen on the Hangar Queen 10 campaign!

This one is coming to an end, so I did finish Rat Racer! It didn't come as easily as I thought it would have though. Aside from the "ghost seams" from the plastic shrinking at different rates post injection, I had fit problems with the wheels onto the strut. This resulted in using a bit too much glue, and getting a bulge that had to be taken care of.

In the end, following lots of different decal softeners (Don't use Solvaset on Techmod decals!), and a spare Techmod 55" red boardered star, I got her done.

So, I used Loon models "C" cowling with the open cowls (highly recommend!), a True details P-47 seat with belts, and a Brassin 75 gallon drop tank. The Superscale decals gave me a bit of a problem by not wanting to conform, and they also lack the starboard side nose art of "Happy". Still they do look nice once they were sealed with Future.

Following this post, I did discover a interesting thing on the crop feature which plays with the lighting (I really dislike upgrades when they change the way I like doing things!). I edited the photo's in the gallery section.

Also, a very special thanks to all that participated in this campaign! Thank you! Quite a turnout and lots of P-47's for all to see!