Excellent work so far! I like how the Loon cowling looks.

Sadly, work, life and all has stolen my modeling time, plus doing a NMF on a MiG-21. Hopefully, I'll be posting a little more, as things are starting to settle down.

I'm also in the process of showing a newcomer to the hobby (my dime), and he's doing pretty darned good! So, I've convinced him to join our build as well. After all, you really can't too many T-Bolts!

Keep up the good stuff!

I've decided to try a different path with the canopy on this build. I've used a small amount of TET applied to the fuselage and then settled the clear parts in place and taped down. The main section has cured for a couple of days, the front glass is set aside now.
Once cured, I will mask up, paint the frames with the interior green, then get on to priming the body ready for the main paint work. 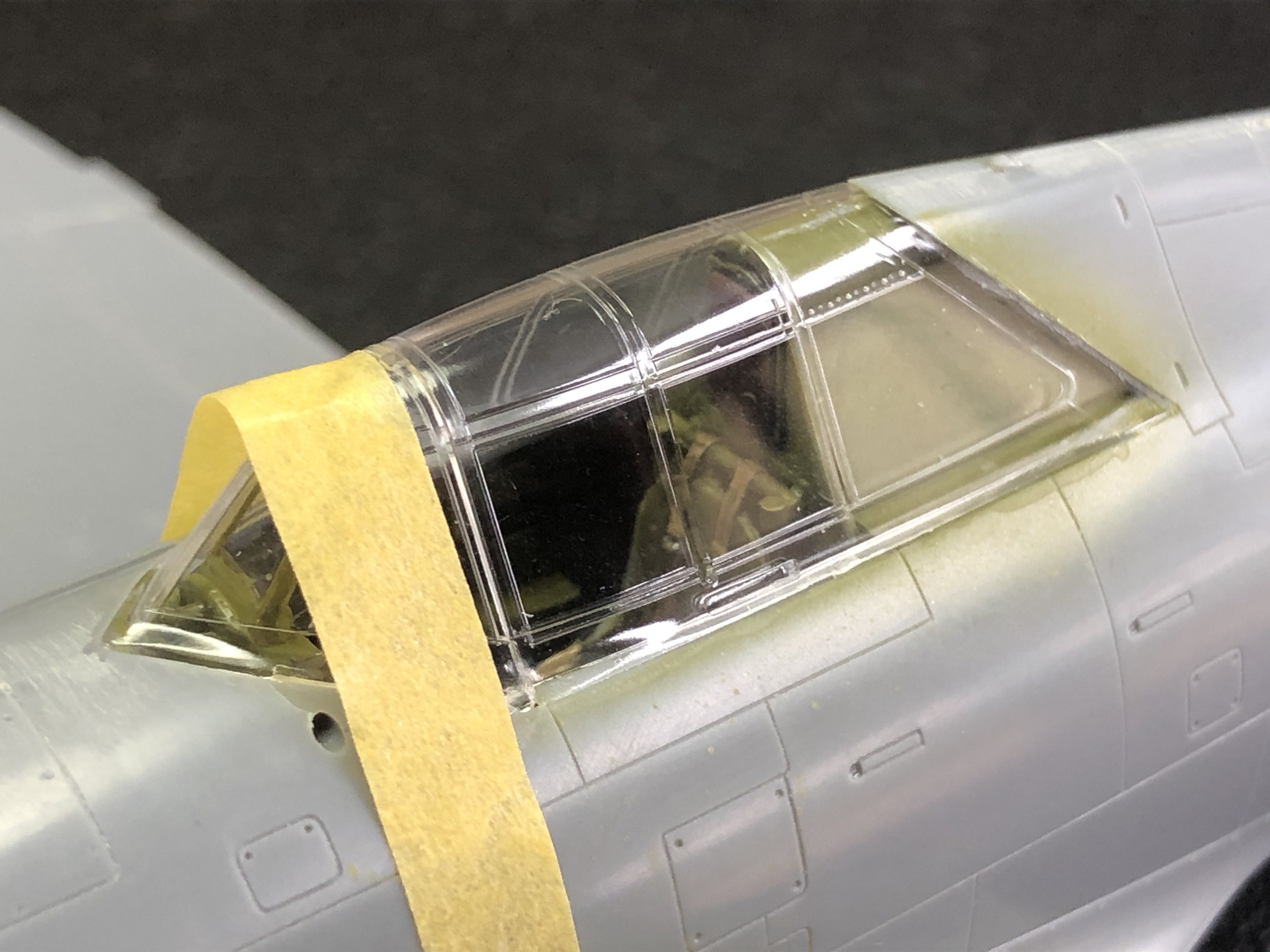 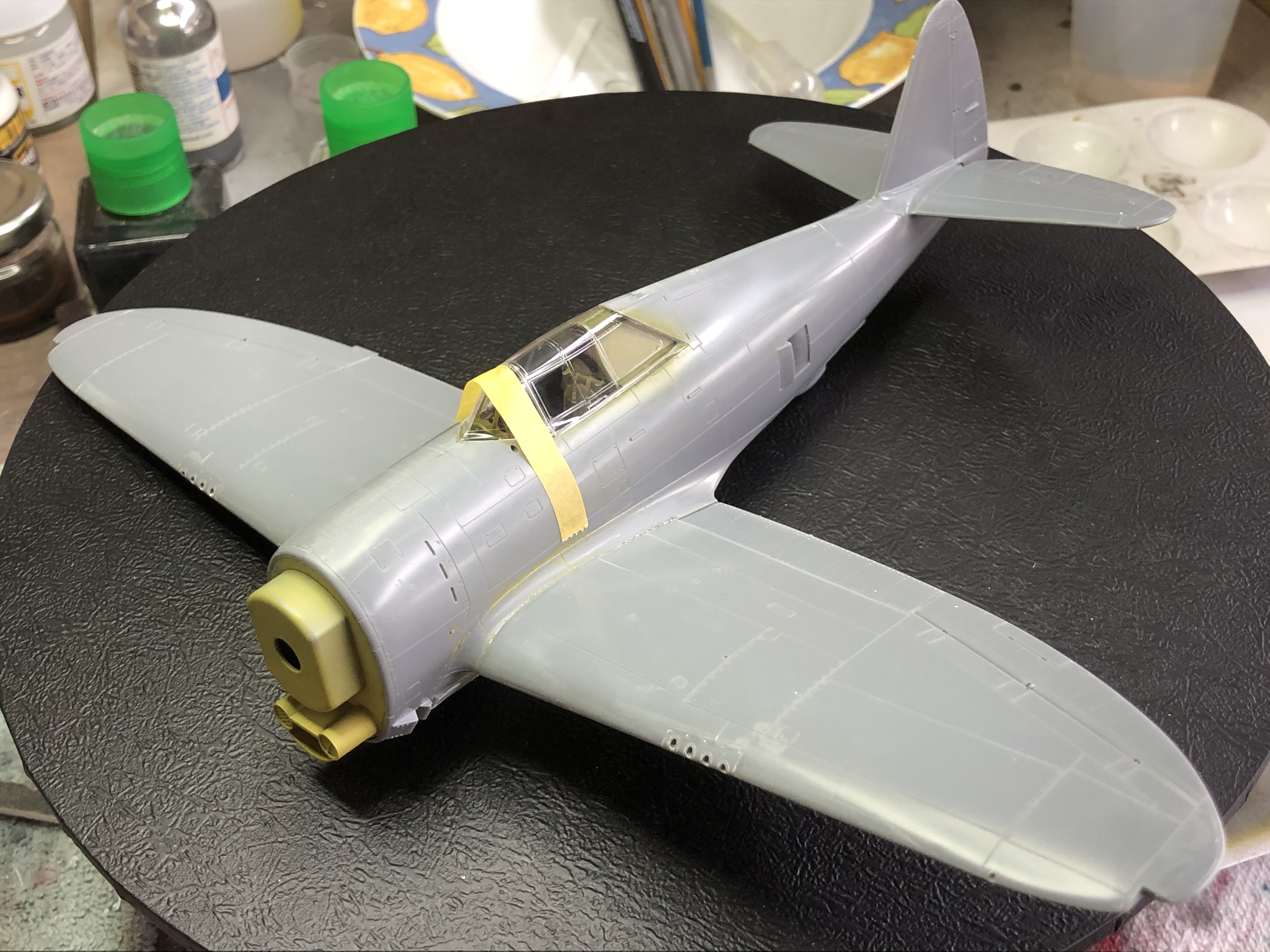 As expected, perfect fit on the clear parts, no gaps to clean up!

REPLY & QUOTE
md72 (Mark Doremus) said
Late to the party, picked out a challenge, forgot to sign up and forgot to get started. Well here's my entry, wish me luck. 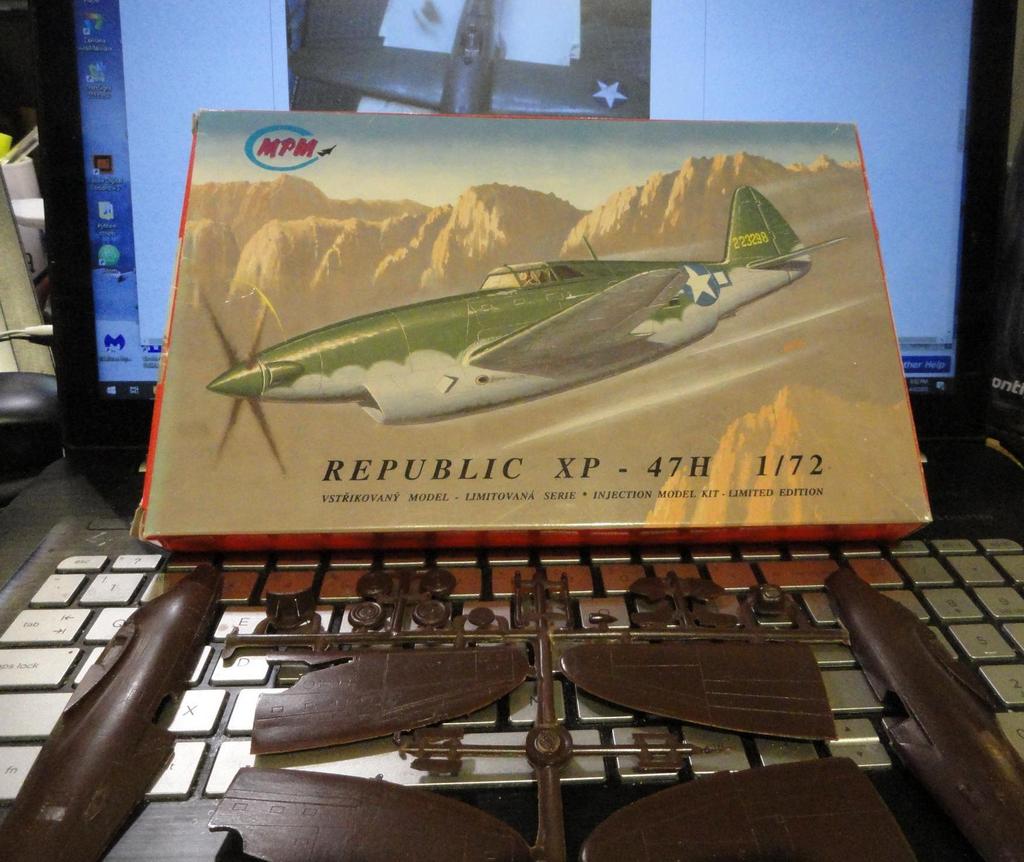 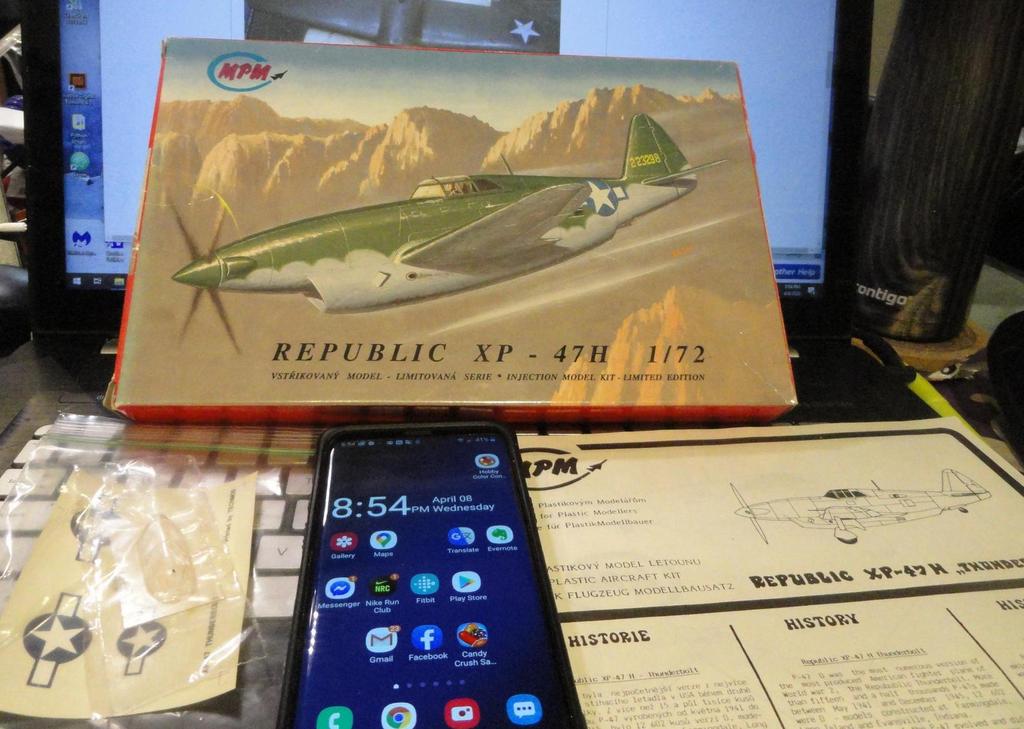 Love the lines maybe I can finish this in 2 1/2 months.

Late to the party, picked out a challenge, forgot to sign up and forgot to get started.

Better late than never mate! Great to see you here, and that is one wild looking P-47. I would love to see that in 1/48.

Best of luck with the build, I'm looking forward to watching this one come together.

Mark, one of the odder variants of the P-47. Too bad they couldn't get it flying till July of '45. I'll be following along. I have seen there's a resin fuselage conversion for the 1/48 Tamiya kit out there, a little rich for my blood at $25, but here the cost of shipping takes it to a level that could get me 2 Tamiya P-47's with extras! Good luck with it!

Damian, great work so far, and thanks for being an essential person. Sadly due to politics here, my skills have been reduced to one of "How not to catch this" and dispeller of myths. The silver lining is that I do get to enjoy a bit of a building frenzy! Four airframes in 3 weeks! Woo hoo! Cockpit update to follow.

I'll also be giving the thread on Aeroscale a bump, to see if we can get a few more to start building here. Also, we've yet to come up with a ribbon. Any thoughts? I don't really have the skill set yet to design these things.

Keep up the great work so far! And remember to wash your hands often, with soap and water while singing the birthday song twice! Be safe out there!

REPLY & QUOTE
md72 (Mark Doremus) said
Wow, this is a lot more old school that I ever imagined. Just look at those gates on the landing gear. 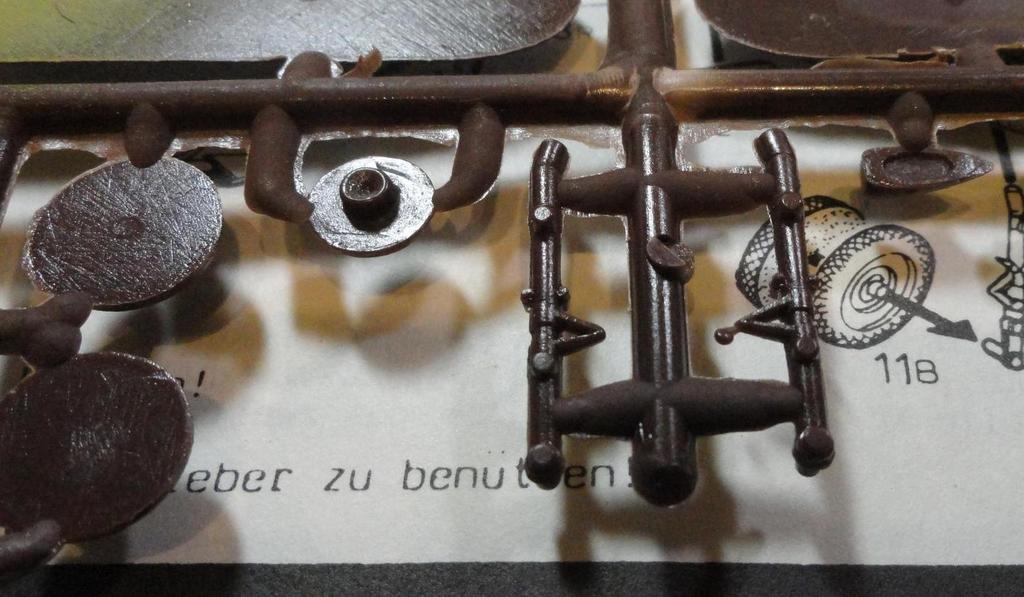 Never had to drill out the wheels for the landing gear, at least they gave me center markers. 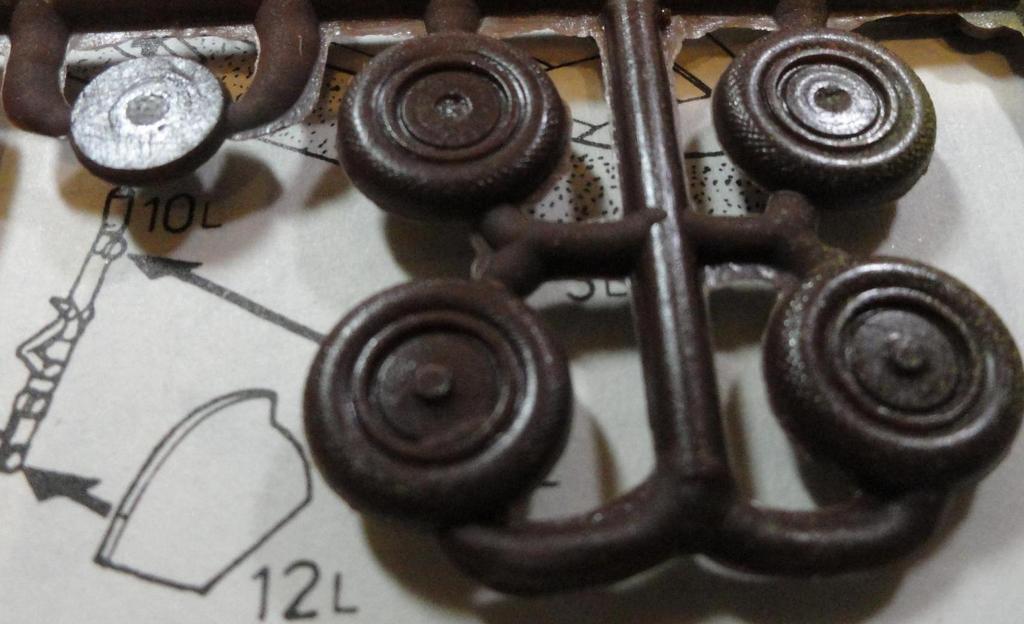 And those locators in the Wings and the fuselage for the landing gear, not! 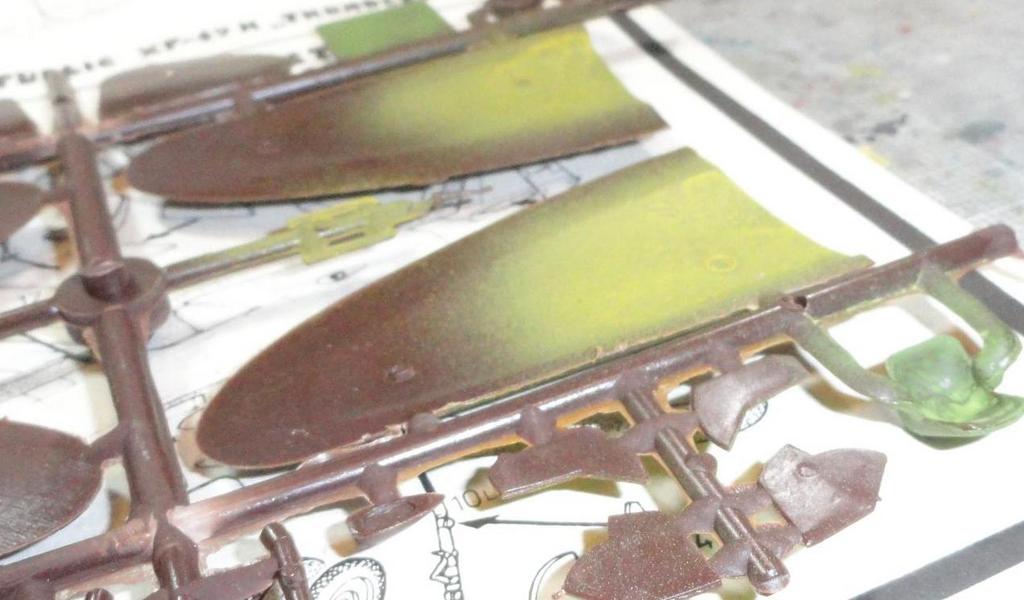 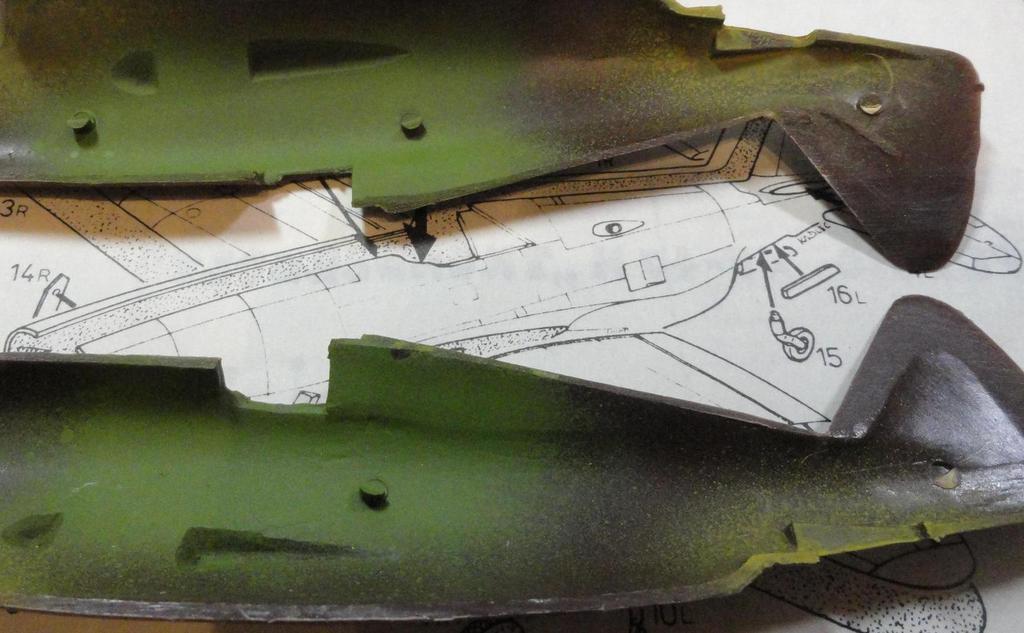 Oh and see the locators for the cockpit.

And I thought the hard part was going to be the butt joints for the wings and elevators.

REPLY & QUOTE
AussieReg (Damian Rigby) said
Mark, you've got your work cut out for you there mate, but it will be an eye-catching display piece for those who are aware of it's lineage!

You guys stay safe there, it sounds nasty!

A little progress on my build, the clear parts cured and I masked and painted them with the interior green. Next up is primer. I'm going to try some black-basing with a grey mottle for variation, using MS1500 for both. 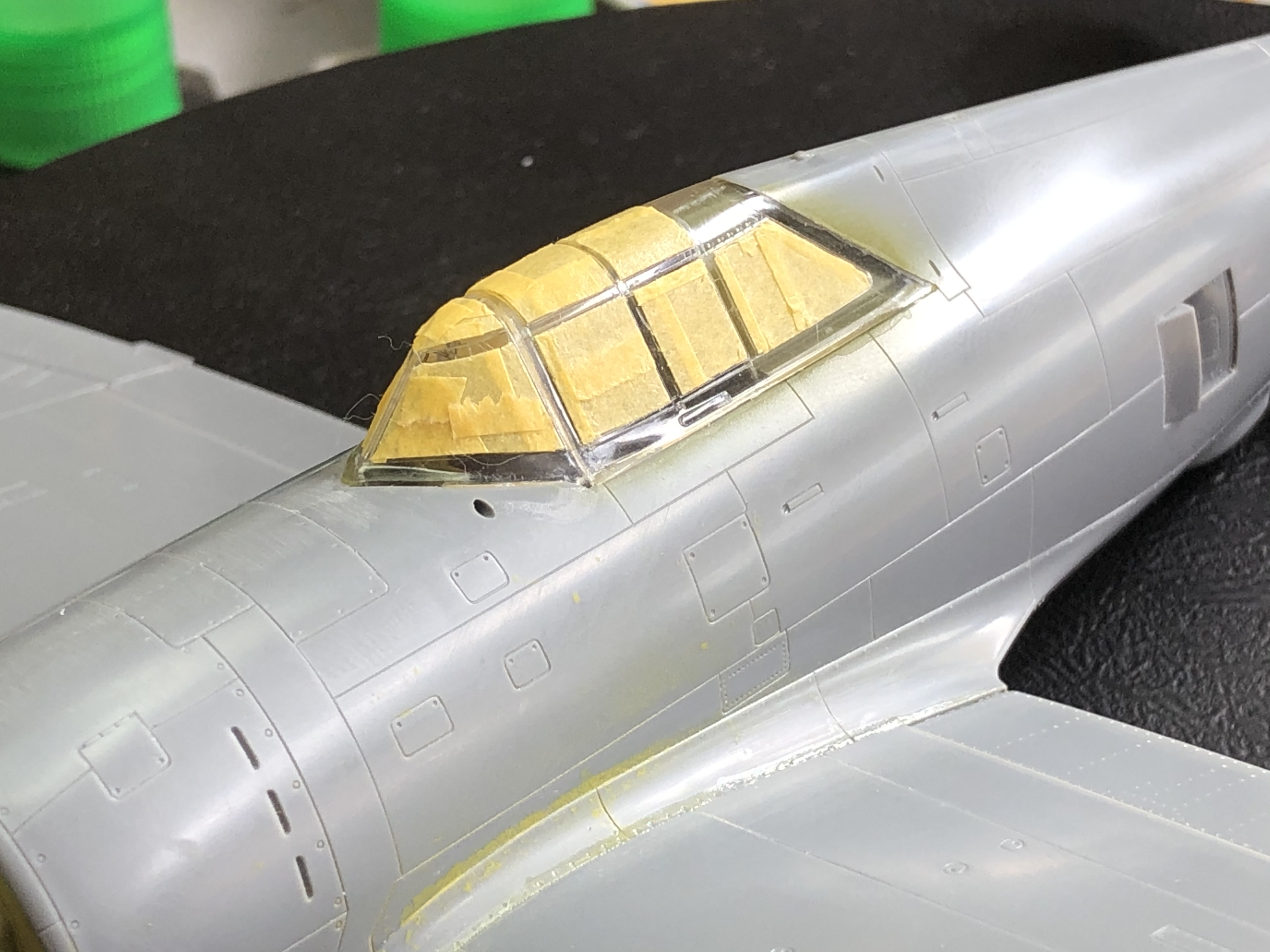 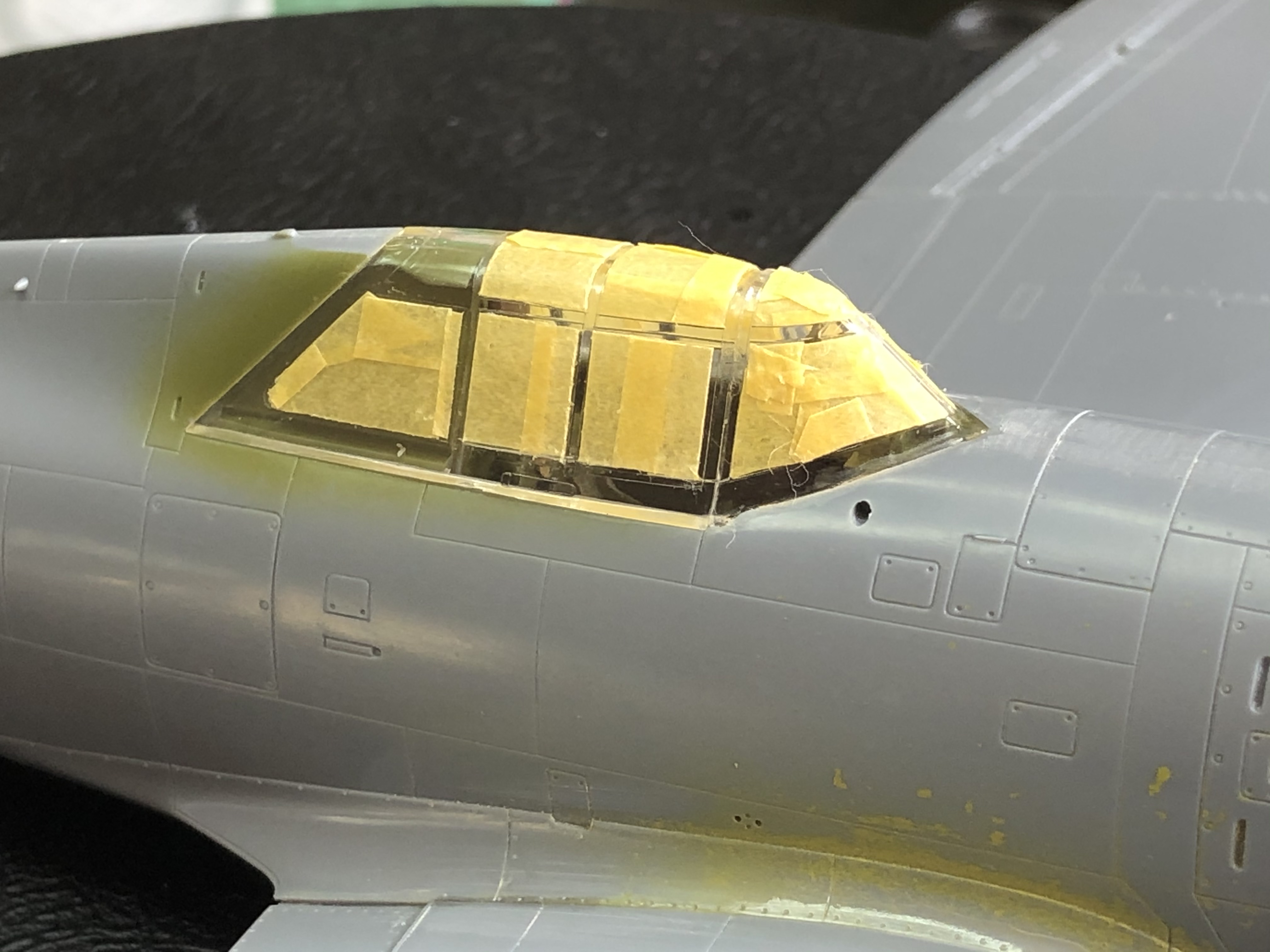 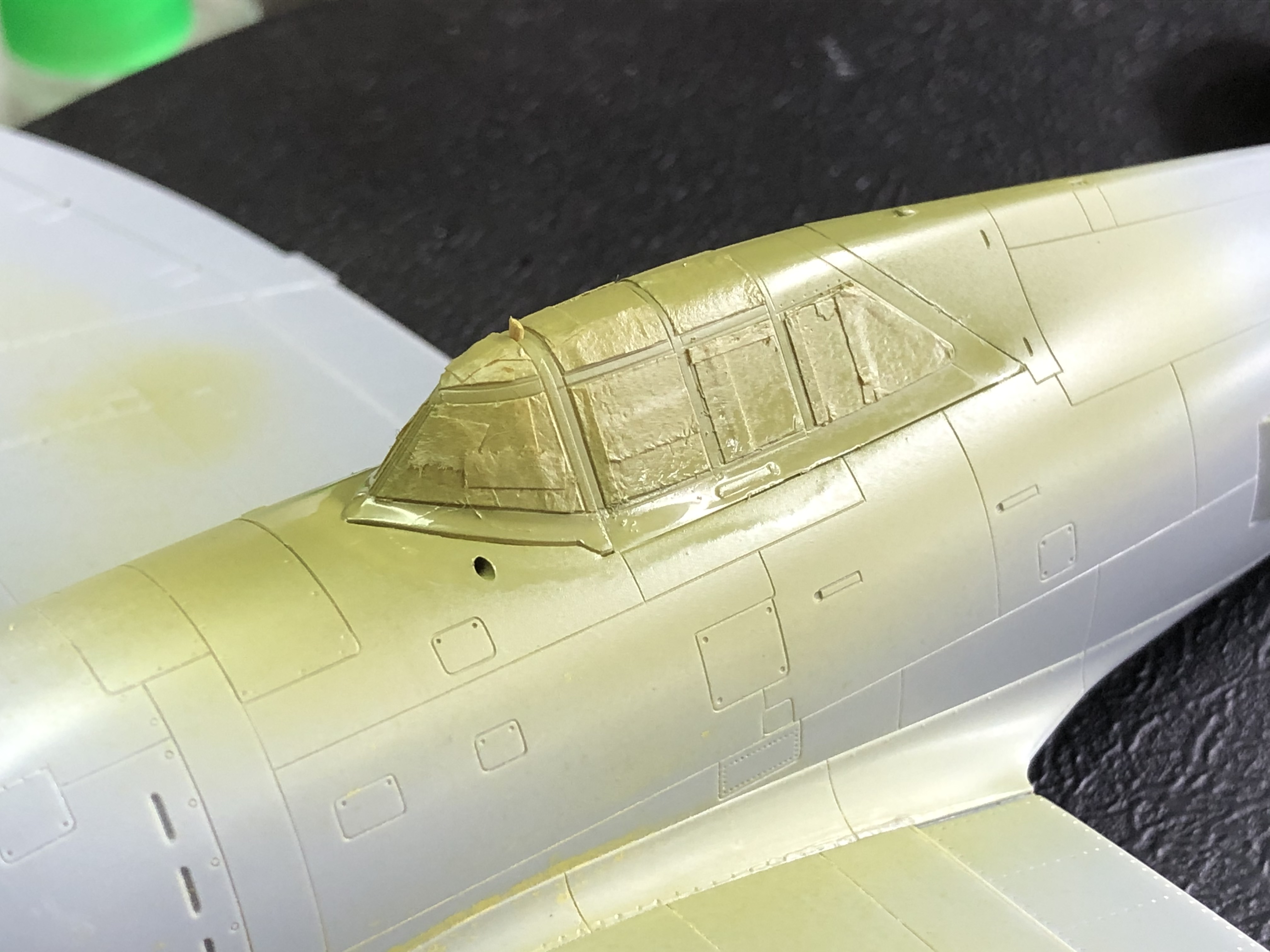 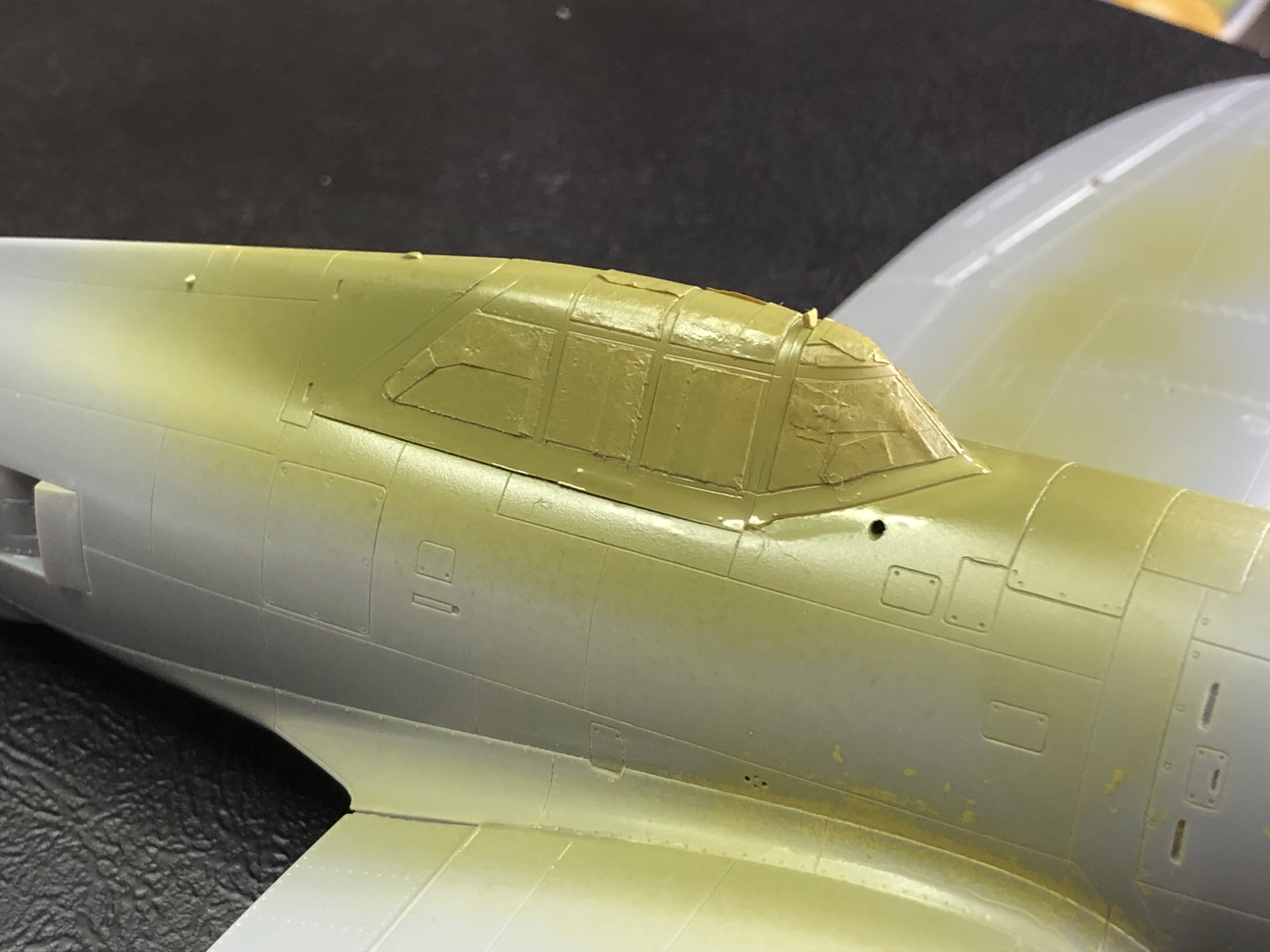 REPLY & QUOTE
lampie (Nigel Julian ) said
I've got that XP-47H kit stashed away with a Tamiya 1/72 Razorback which I was thinking of using for undercarriage doors, etc. Maybe dig it out next time I'm up in the loft....or maybe not

It'll be really interesting to see how you get on with it.

My P-47C is finished. This has been built for the Kingscliffe Airfield Group and represents a P-47C straight out of the crate. 16330 went on to become Zemkes "Moy Tovarish".

I've also been forging ahead with another Tamiya Razorback.

REPLY & QUOTE
forest1000 (David Fuller) said
My entry, for the group build. I forgot to post.

REPLY & QUOTE
AussieReg (Damian Rigby) said
Great finished build Nige, and a unique scheme as well! It didn't even occur to me that the 16330 "OOB" would later become such a famous aircraft, even though it was the last P-47 I built and posted it on page 1 of this thread!

Smashing through the second build now as well. I saw on FB that you had a couple of schemes under consideration, have you firmed up an option yet?

David, great to see you here as well, looking forward to your Jug taking shape.

REPLY & QUOTE
b17-peter (Peter Mollenhauer) said
Hi there,
I found a suitable kit in my stash, it's Italeri's P-47N !

I keep my fingers crossed to finish in time...

REPLY & QUOTE
AussieReg (Damian Rigby) said
Great to see you jump in as well Peter, good luck with the build! I haven't seen the Italeri kit built up, looking forward to following your progress. 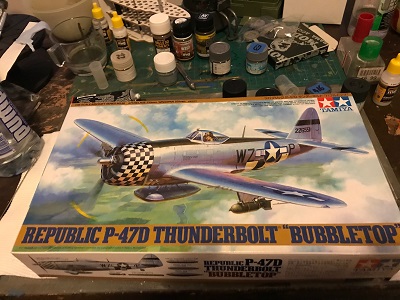 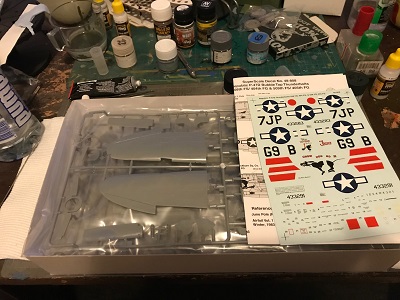 REPLY & QUOTE
AussieReg (Damian Rigby) said
Stephen, great to see you joining in here mate! Looking forward to following your build. Which scheme are you planning to go with?

REPLY & QUOTE
le_steph40 (Stephane) said
Hello,
Let me join you and show you my 3 models in progress started at the end of last year. I finished Christensen's mount yesterday (can be seen in P-47 Modelling), I am now working on the others 2: Johnson and Gabreski's ones.
I added an Aires cockpit set in the Christensen and Gabreski builds and a True Details in the Johnson build.
The 3 cockpits, maybe Johnson's cockpit should have been ZCY instead of DDG...? 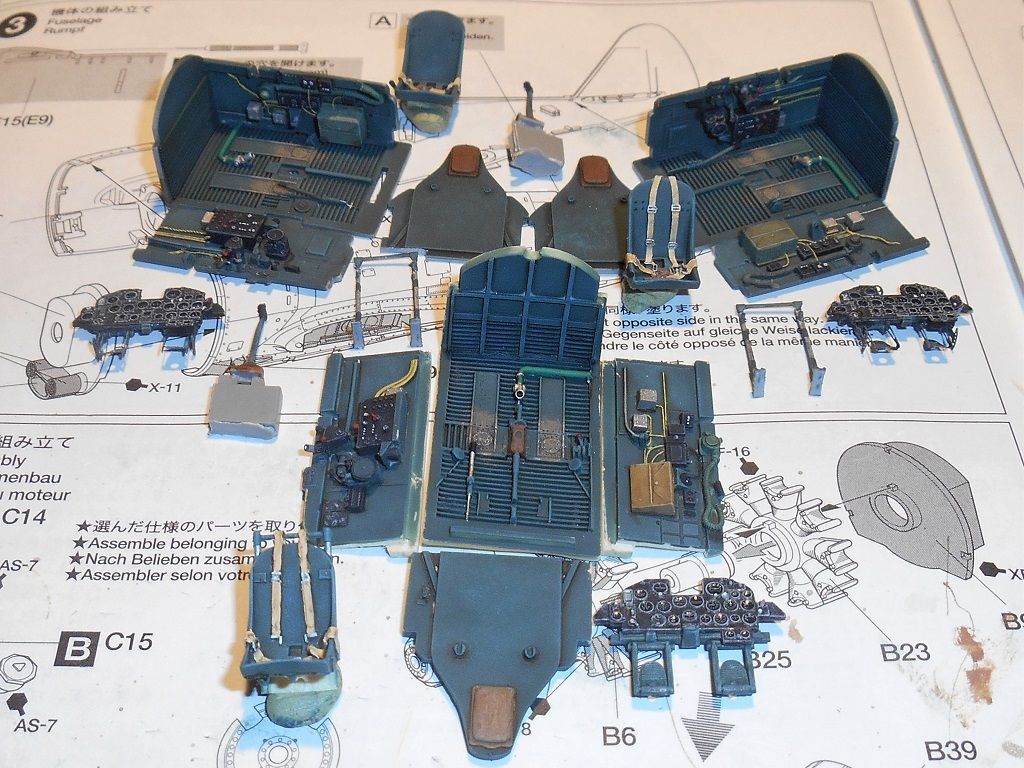 One of the Aires cockpit sets 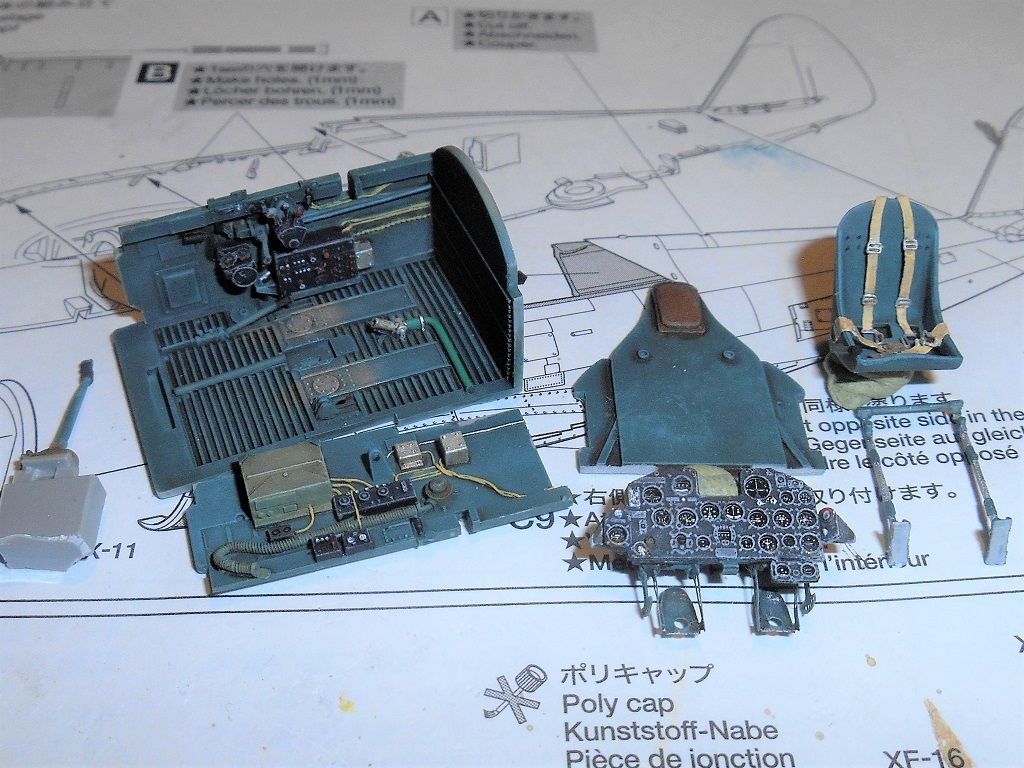 And the gunsight for Johson's cockpit. 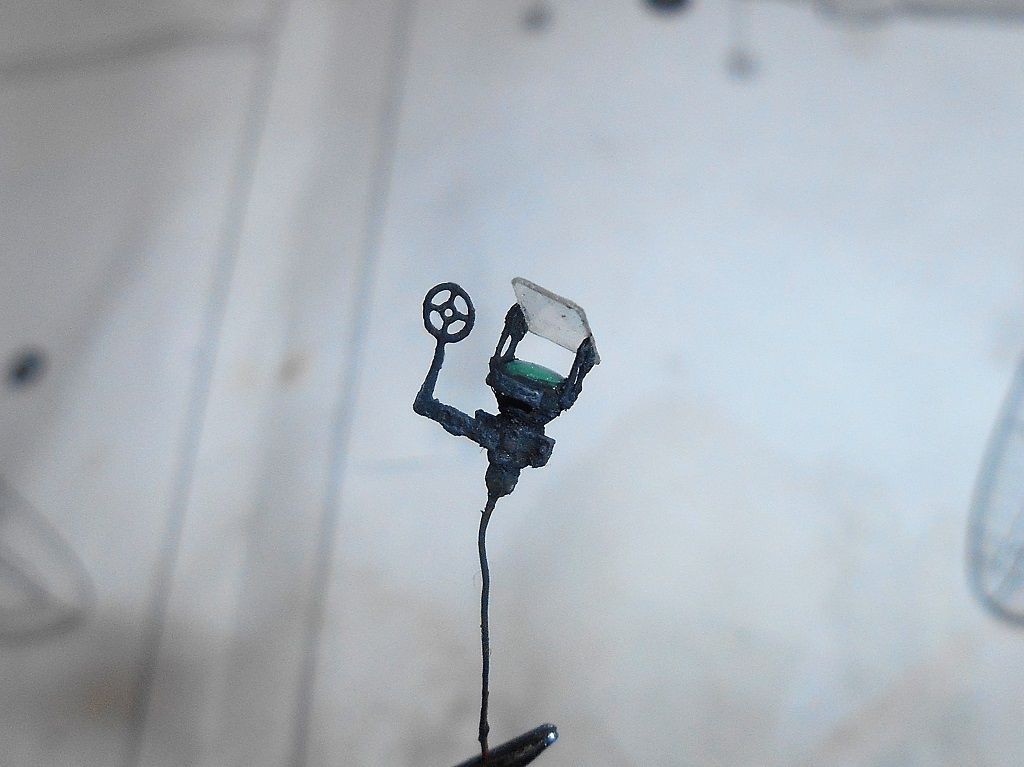 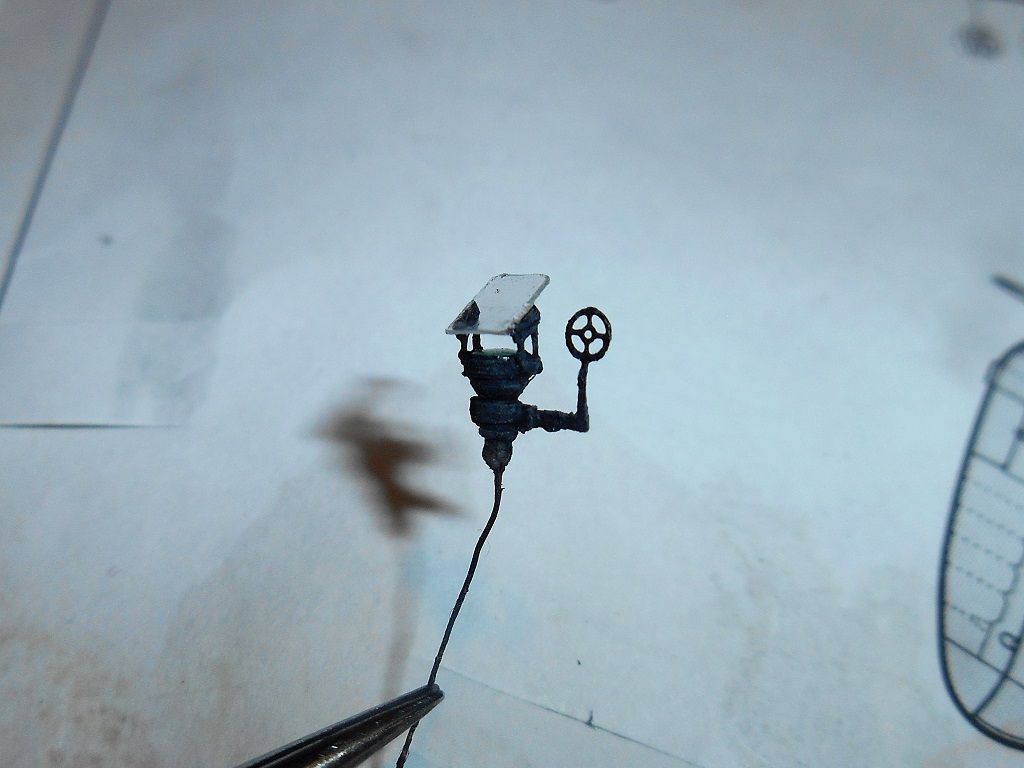 Don't forget to Enlist, just go to the Campaign Page and hit the "ENLIST" button in the Participants box on the RHS.

REPLY & QUOTE
le_steph40 (Stephane) said
Hello,
Here is the continuation
I made my own copy of a stab, elevator and rudder resin set. 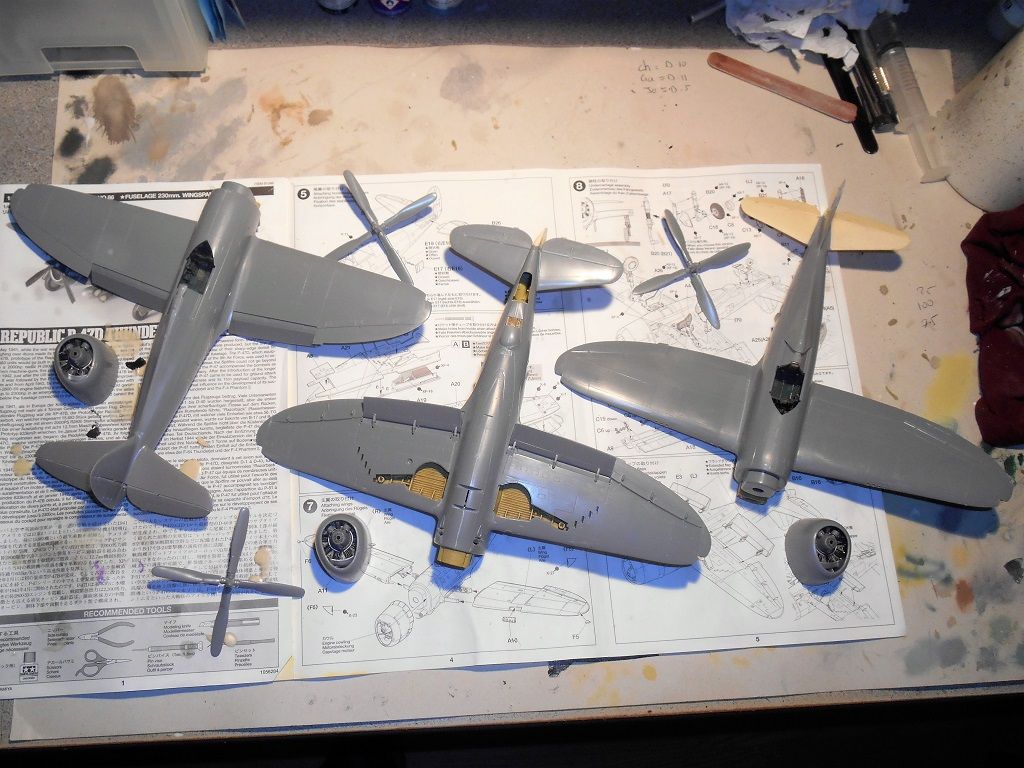 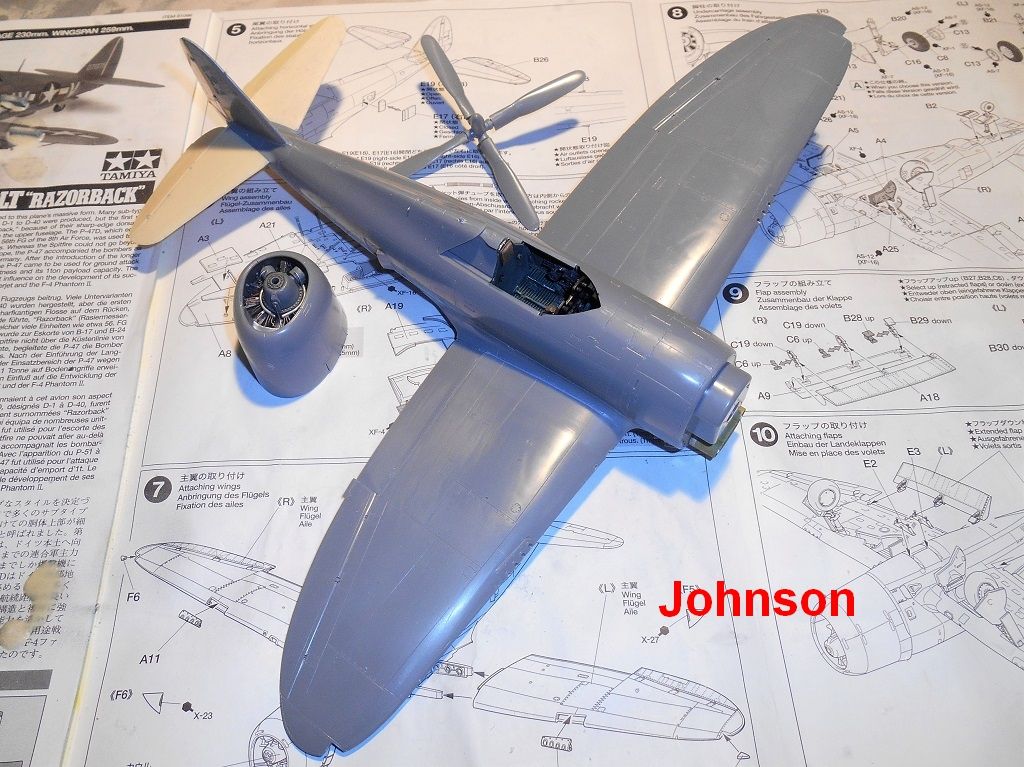 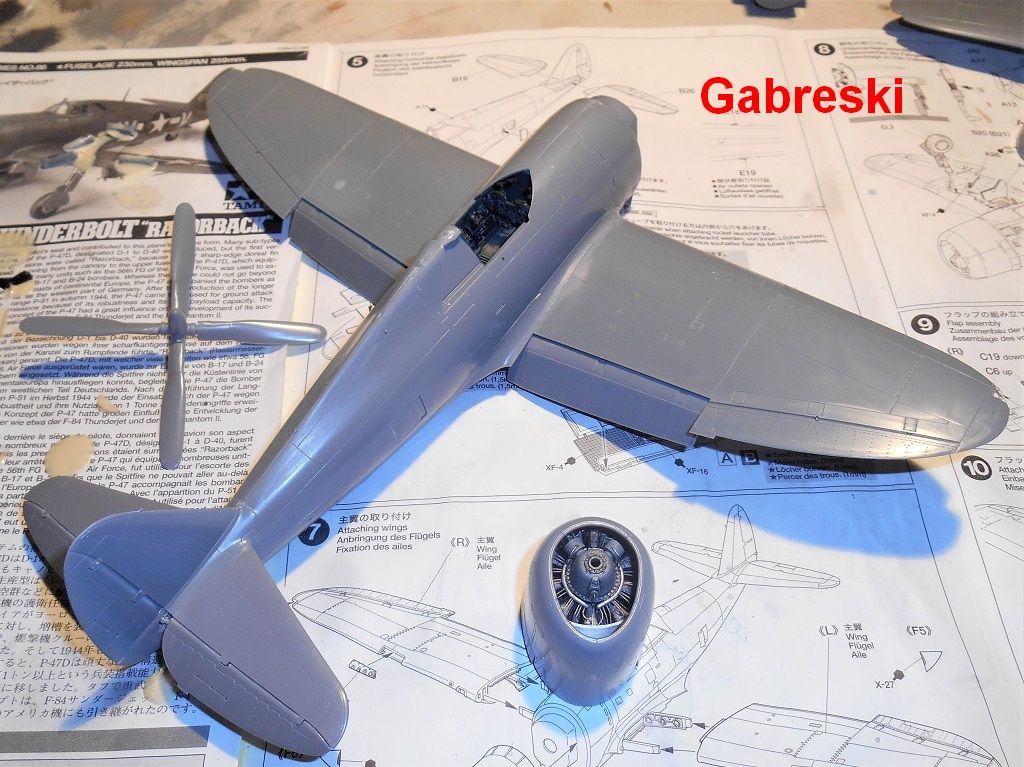 Stephen, great to see you joining in here mate! Looking forward to following your build. Which scheme are you planning to go with? 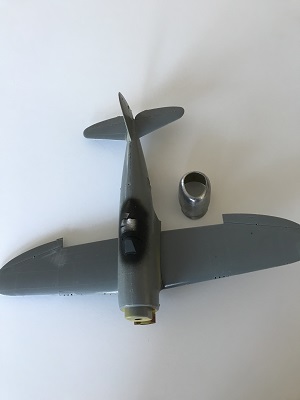 Moving along nicely Stephen, these Tamiya P-47 kits really are a dream to build!

I always like to do a bit of background on the various builds in these threads, and found a couple of images of Chow Hound. 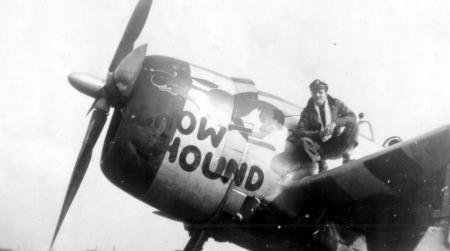 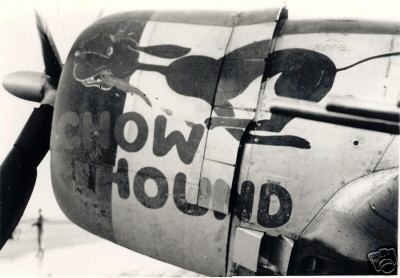 Great to see so much going on here!

Peter, it'll be interesting to see what you do with the Italeri kit. David, always a great choice! Stephan and Stephen, both of your builds are progressing nicely. Stephan, I did a similar gunsight config on a Monogram build a couple of years ago, yours is much better!

D, you're right! These Tamiya kits are just a modeling gem. Ease of build, accurate and solid/clean. I can't say enough good about them!

That said, the builder on the other hand is fallible!

I've been going through a building frenzy during the current world situation. I think many are, when this happens to me, I sometimes forget my place on the kit I'm doing. I finished up the cockpit for "Rat Racer", and within 2 hours I had a very complete airframe! Yay! Only afterwards while painting some other kit parts did I notice a tree that didn't belong. Further investigation found that I totally didn't put the rudder peddles into my bird! Trying to undo this oops si doodle has taken way more than 2 hours! Despite my best efforts to get the part to go where it's supposed to, once closed up, it won't happen. I ended up cutting the guide circles off, and then fishing the whole thing into a sort of place. Good thing it's deep inside, and my audience isn't going to be looking that far!

Despite the silliness on my part, it remains a fabulous kit! I also wish to thank Pasi for the cool vid on assembly of a P-47 out of the box! What a tribute to the effort, must see!

Next up will be masking and putting the windscreen on, and the navigation lights!

D, thanks for the repost of the "Ramrod to Emden" vid. Lot's of good footage in it, though from various other sources. Still nice to re-visit. I did notice that "Rat Racer" had its red outlines painted over, crudely.

A cool effect for a modeler to replicate, not this one, but for someone. I'll be going with the red outlines as I like them, and they are most certainly different.

Keep up the great work going on here! I'm really loving it!