I'm building Polar Lights' 1:1000 scale (TOS) Enterprise model kit into sister class Starship USS Exeter NCC-1672. I originally started putting the kit together in 2003, but set it aside to do other projects. I didn't get past the assembly stage - so I figured this would be a great time to finish it up.

USS Exeter was commanded by Captain Ronald Tracey. USS Enterprise found USS Exeter in 2268, orbiting Omega IV - with the entire crew reduced to dehydrated crystals as result of an ancient biological warfare agent introduced into the planet's atmosphere. This was original series episode #54 and was written by Gene Roddenberry as a possible second pilot for the Star Trek series if need be.

Captain Kirk and crew found Captain Tracey alive down on Omega IV, where the survivors of the global war worshiped an American Flag - the Yangs. Their enemy were the Kohms.

The second reason why I chose to model USS Exeter is that she was the Constitution Class Starship that I always preferred to play when I was active with Star Fleet Battles and Star Trek: The Role Playing Game. I had a little SFB miniature Constitution Class ship - but wanted a bigger one - and one not as big as the old AMT Enterprise. 20 years later - Polar Lights to the rescue!

The Polar Lights model kit is pretty nice - save for some serious seam and gap-filling. It is inexpensive and just the right size to please most modelers who want to build and display more than one TOS-era Constitution Class Starship. I'm going to finish and weather Exeter pretty much the same as the studio Enterprise was done. I added a Bridge Decal from JTGraphics underneath the Bridge Dome - even offset it from the centerline to be geeky, but everything else is pretty much what you'll get in the kit.

Just when you think you've got all the seams/gaps - you find another one. But, it's ready for painting now. No lights or anything else for this project - I want to finish it... 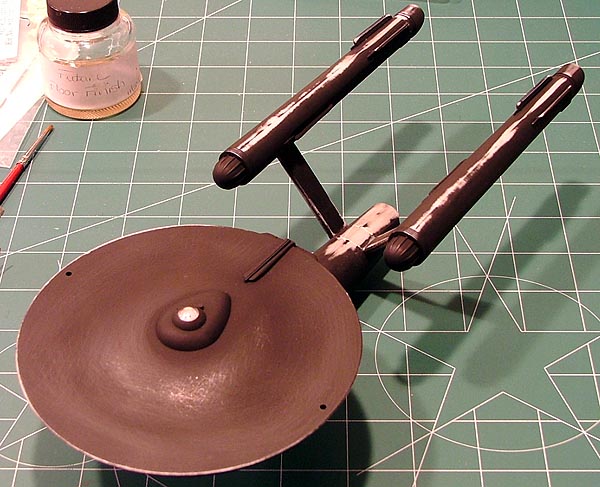 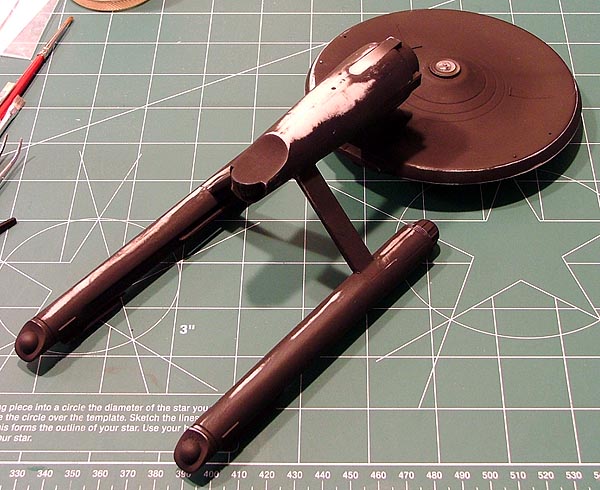