You are viewing the archived version of the site. Go to forums.kitmaker.net for info on latest news and other content.
mainScratchbuilders!Armor/AFV

I am mighty glad to hear of your impressive rail-based plans mi amigo...especially your railcar plans

Your progress so far {on the Railguns} looks great. You're obviously making the folks over at Evergreen plastic very happy indeed. I have a question, from your supplied pictures it looks like your using {maybe} the Dragon kit trucks for your build?
If so, will these work for all of the Bruno's, including the Schwere?
Also, since you obviously have plans for these cars from Krupp, do you also have a source of plans for your future railcars?..?
If so, I would be VERY interested in talking to you.
BTW.....which german train do you have your eye on?.....Armoured Train No. 51?.......or maybe the BP 42/44?....?
Just curious..........reason being is I am also working on an armoured train project, but my focus is not German, but instead Russian, Polish, Czech, Japanese and even Chinese armoured trains....................

REPLY & QUOTE
You're a better man than me, Gunga Din!

REPLY & QUOTE
ekke (Julius) said
Great! This looks like a huge project, have fun and keep us posted

REPLY & QUOTE
irish (Errin Hoffman) said
Thanks for all the help Panzer 67.

REPLY & QUOTE
John 3:16- For God so loved the world that He gave his only begotten Son, that whoever believes in Him should not perish, but have everlasting life.

REPLY & QUOTE
panzer67 said
at the same railcar i think is not possible because the searchlight require the generator to supply the equipment and the batteries are formed of some railcars separated at the firing position, chained on traveling position

will see my info and tell you what i can found Irish...

REPLY & QUOTE
irish (Errin Hoffman) said
I am also interested in German armored trains. I am currently working on a project, but have a question. I am building an AA gun on a twin axle flatbed. I saw the picture in Werner Muller's, "German Flak in WWII". My question is, has anyone ever seen the combination of a Flak quad 20mm and a 150 cm searchlight 37 on the same railcar?

For anyone interested, there is a Spanish company named Baluard who makes resin German railroad engines and cars. I just finished a diesel engine, and purchased an Armored BR60 engine. They are not exactly an easy build, but look great when complete.

REPLY & QUOTE
John 3:16- For God so loved the world that He gave his only begotten Son, that whoever believes in Him should not perish, but have everlasting life.

actually some members of the collection are:

some in progress and most finished.


but really focused on german railguns, the room for the hobby is like a musseum of transportation

REPLY & QUOTE
Cuhail (T Murphy McCraken) said
OOOOOOOH! Dude, I am so looking foreward to seeing your in-progress pics! As a BIG fan of railarmor (any countries, any era), I am really excited to see how ya do!

On the bench:
1/35 Scratchbuilt Rail Tank

REPLY & QUOTE
panzer67 said
the latest project in progress is the complete family of german railguns calleds bruno as:

all start with biliographic material and blueprints from krupp

to finish until september 06 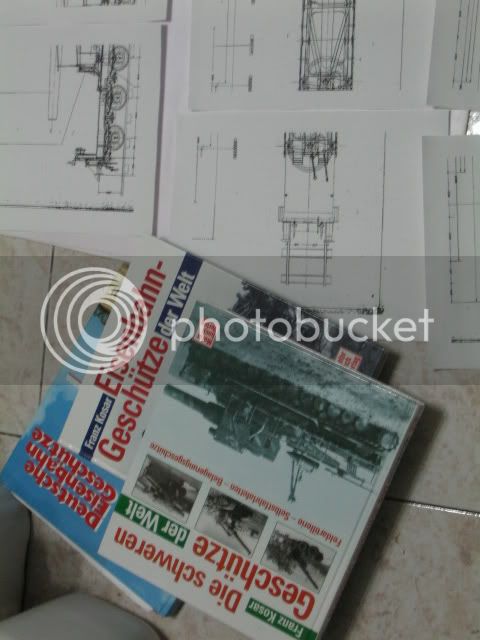