You are viewing the archived version of the site. Go to forums.kitmaker.net for info on latest news and other content.
mainGeneral Shipmaking

a photo feature by Alec Cap
15
Comments
"Crew-mate Alec Cap (bigal07) shares a fine batch of images of his 1/700 scale drydock diorama build in this "On Display" Feature!"

Originally, I had the idea of building a rather narrow, but extensive dockyard that I could use again and again, displaying varied surface craft, and the dry dock would have been perfect for a centre piece.

Of course, all of these ideas were before the model arrived...this kit measures 300x145x120, and its way too large...also a shame that the up-rights are all solid plastic, as it would have been great if these were photo-etch brass.

The Japanese destroyer displayed in drydock was oddly enough the only 1/700 full hull kit that I had, as I normally build waterline only...I tried keeping things looking wet with some gel and varnish for a slight water effect, that I believe you would see in the real thing, among the bits of green occupied by constant use, sea water in and out of the dry dock...again the huge metal structure seems to be let down by a lack of photo-etch.

treadhead1952
Hi Steve, In reply to how they get there, the land locked dry dock is just like a short bit of canal with a set of flood gates at one end. They either drive it or push it in with tug boats just as they would when docking the ship at a pier,tie it up, close the sea gates, and pump out the water in stages taking the time to bolster the weight of the ship up with beams, ropes and cables as needed until it is sitting on the supports in the bottom of the dock. If you ever get a chance to watch the procedure it is pretty neat. In addition to land locked dry docks there are also some large floating dry docks that have been made in the past that serve the same function using ballast tanks to lower themselves in the water much like a submarine does flooding their dry dock compartment until there is enough clearance so the ship to be repaired can be maneuvered in to the docking space. At that point they close the gates on either end and pump out the ballast tanks and dry dock space essentially floating the ship and dry dock at the same time to make room for repairs to the outsides of the hull or running gear. Never got a chance to see one in action, but have seen photos of the procedure and it is amazing.
APR 24, 2010 - 11:53 AM

reef75
Hi Jay. Thanks for the response.Im often still working on board de-rigging while the drydock is flooding so often get to see how it works. I was even on a brandnew ship when somone did not release the rope at the right time dragging the ship into the dock wall leaving a rather large dent. The owner watching her come out of dock was not too happy Im still a little unclear on the model subject dock type. Is it a floating drydock ? With the dockwalls lower than the waterline of the ship it cant be a flooding dock. Just out of interest what size of ship could the largest floating drydock take ? Like you say, must be incredible to see. steve
APR 24, 2010 - 12:10 PM

bigal07
Hello there, the dry-dock model is greatly unfinished as I originally wanted this as a centre piece to a larger diorama, and as explained, this model in itself was much to large for what I wanted. Look at the model and obviously you'll see 2 open ends, 1 of these ends would in fact be a solid wall, the other either 1 huge raise and lower type door or 2 doors allowing a considerable size ship to be pushed into place but tugs and guide ropes, at times there would be 2 ships inside this dry dock, or up to 2 submarines, as Jay explained then the water would be pumped out, the use of tie ropes and supporting bamboo would often be used against the hull of a ship, and further bamboo constaructions made to gain access to a working platform. As in a river lock where one side of a river is higher then another, the same would apply within the dry dock with the exception of removing the water by pumping, and re-filling by valves allowing the sea to enter the dry dock at a controlled rate, once the level had been reached, in the same respect as a river lock, the doors would be open to the sea as now equal pressure would have been reached.

Above is the real deal, if you look straight ahead you'll see the huge sea wall doors. And below my model without any doors or wall which either way would have been built if I had decided to use this within a diorama, 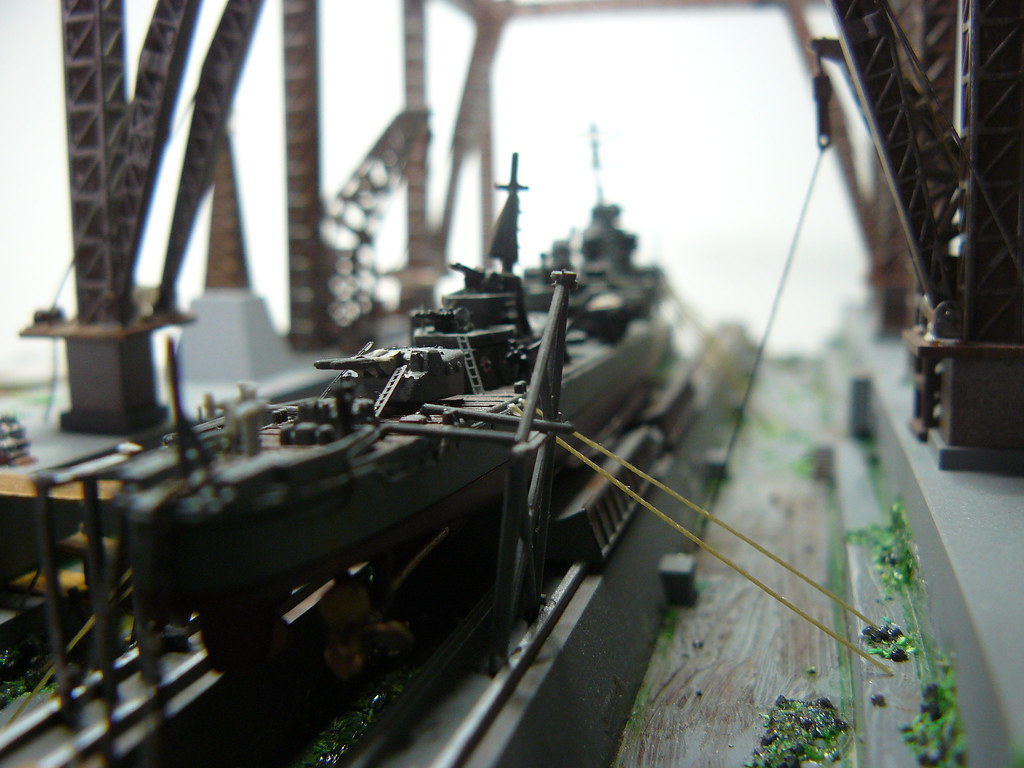 reef75
Hey Alec. What you describe is very similar to the drydock i work in only bigger as shown in both model and picture. The big difference between your photo and model is the large structure the ship is resting on and is the part that baffles me. It places the ship above the water level of your dock making it not very practical. Both for getting the boat to float and also would massively reduce the displacement of what ships could dock there. This is why i felt maybe it was a huge slipway. With regard to the Bamboo i see now, they also support ships where i work with laterals into the dock walls and often some underneath on very round bottom boats, mostly tugs. Also as im a rigger we use steel instead of bamboo for our stagings, not sure they would let us use bamboo in the uk steve
APR 25, 2010 - 04:49 AM

bigal07
Hello Steve, I can only agree with you, any ship resting on that structure would be sitting rather high, at wild guess, and its only a guess and this dock is built before WW2, a sledge that the ship can setle down on, with the amount of lifting equipment surrounding both sides and no clear way of powering that sledge (if indeed it is a sledge) perhaps this is just a mistake of the company that produced this model, I have tried for almost 3 hours searching for the real dry-dock this model was copied, I can clearly remember a single ship, which quite possibly was a destroyer being proped up with bamboo, the ship itself was sitting quite high. Just can't find that photo or remember where I saw it last, I huge harbour in black and white showing a closed dry-dock with one ship being either built or repaired, and 100% certain Japinese.
APR 25, 2010 - 06:14 AM

reef75
Hey Alec. I know one much smaller yard where i have worked build and repair on a slipway. They use a cable and winch to drag the boat out of the water with a high tide. The kind of boats im talking about are small coastal freighters or tugs. If the sledge is sat on wheels on what looks like rails then this would certainly aid winching if was the case. Will keep an eye out for similar docks too. steve
APR 25, 2010 - 06:23 AM

bigal07
LINK I am none to good with computers, this should be Mighty Mo BB63 in one BIG dry-dock. Many thanks for your response. I've just checked, something has gone wrong, what you'll have to do is copy and paste, then youtube will come up.
APR 25, 2010 - 06:29 AM

reef75
Hey Alec. Got to the vid fine and yes that is a big drydock They use the same method as where i work landing the ship on blocks. Every ship that comes in has its own pattern and they are shuffled around prior to the ship arriving. Often extra supports are put in if a lot of the shell is cut away. Big ships quickly lose their strength when both out of water and you take bits away. Got to love the size of them props in the vid too. Must be quite an undertaking removing them prop shafts
APR 25, 2010 - 07:21 AM

Dr_Who2
Hi all, This thread is dated but never the less a most interesting subject. I have been looking up and down for a similar project and also got myself the same 1/700 dock by Fujimi as represented here. First off, a very nice rendition of the subject coming along nicely with the included ship. Also very nice execution. Without even trying to spoil the fun let me tell you, what I found out about this specific kit: On HLJ Website you can read a description stating: This said, I was unable to find any IJN dock picture showing anything close to the kit configuration for anything bigger than a midget submarine. Please feel free to check Picture Click: NH 65826 of the Naval Historical Center for a better understanding. The midget submarines configuration differs much from the kit though. I still love what was achieved by Alec but I guess we better put accuracy and alike aside and plain enjoy the result.
JAN 27, 2014 - 09:01 AM
Go to Forum Topic
Copyright ©2021 by Alec Cap. Images and/or videos also by copyright holder unless otherwise noted. The views and opinions expressed herein are solely the views and opinions of the authors and/or contributors to this Web site and do not necessarily represent the views and/or opinions of KitMaker Network, KitMaker Network, or Silver Star Enterrpises. All rights reserved. Originally published on: 2010-04-23 00:00:00. Unique Reads: 6686