Not wanting to wasting any time on discussing the kit parts, which I covered in my review of the kit (Link at the beginning of this feature) and since the construction was mostly straightforward, lets move right along into one of the more exciting parts of any buildat least for me, the painting. Per the instructions there were three options to go with in respects to the decals and part layout presented. Although I would not have minded building the US Marine version of the D9, I rather fancied the IDF version a bit more. Always the best thing to start with is good priming! Not only does it seal the base model for the up and coming paint stages, it will show off any flaws you may have so they can be corrected. I found very little I was not happy with so I proceeded right to some Pre-shade. In retrospect the pre-shade part may have not been needed as I had a plan on adding several different layers to the painting, but it is always fun to keep the chops up. The pre-shade consists of a dark grey I had lying around as the darkening of certain areas is all I was looking to do. One part of the painting project on my D9 was to utilize some of the chipping method to layer the paint on the lower end. Typically these vehicles get beat up in the field pretty well and often many different layers of paint will show through. I first needed to lay down a dark rusty layer to work with. On a side note, you will see me using several different products to work mainly because they work for me and also because I happen to have them in the stash to use. Two good reasons as far as I am concerned. After the base rust has been done on the lower end, a clear coat was added and then a layer of base yellow. This yellow would be similar to the original yellow of the CAT D9 Dozer as these tractors are made here in the USA, painted and then sent abroad to customers for further customizations. I was fortunate enough to have the Desert Eagle Publishing Vol. No. 7: Doobi  D9 Variants which helped a lot for references of all facets of this project. DOOBI D9 Variants: D9 Bulldozers in IDF Service Review Live links There are plenty of great detail pictures throughout the book which helped me decide that I wanted to show the lower end of the D9 heavily weathered. So before the Yellow was applied, a liberal coating of hair spray was added and allowed to dry. I added course and fine salt to various areas on this section paying particular attention to the edges where the wearing of the paint and steel would fade and transition into the IDF grey color I wanted to show on the topside. Next was the application of the yellow base color. Once the paint had dried, not cured, I used a stiff bristled brush to remove the salt from the surface and with some warm water I lightly chipped the color back. This allowed the rust base and yellow base to work with each other to show sufficient wearing. The blade received the same treatment and then promptly after some silvering to the front of the blade as this section would be worn shinny from use in the abrasive environment. It was time for a little dry fitting. This was done several times throughout the painting process as this gives me a good idea as to the direction I am heading in while I paint.
« Back12345Next »

I am building what I like, when I like and how I like it; having fun doing it. I have been building and finishing models on and off my whole life but the past ten years things really exploded. Just about anything goes when it comes to hitting the bench, but wrecked armor, rusted hulks, ships or ...

Namabiiru
Of course, your WIP photos completely disprove my theory, but it's a phenomenal piece of work
MAY 01, 2014 - 08:10 PM

TRM5150
Thanks again Mark!! Sorry to disband any "theories" there were!! Thanks Bill! Aside form the numerous pictures of these things completely covered in dust there are plenty of interesting shots where the sandy mess seems to collect in a few spots leaving the rest, well...not. I was looking at some pics of these in the Golan Heights and the dark brown mud was very enticing... Maybe next time!!
MAY 02, 2014 - 02:50 AM

joseandujar
Sorry about that. I have a question. In step 5 there is a some small/big screws in spruce A that needs to cut in a different way, but where those screws goes to? The instructions doesn't specified where. I think there is another step that mention the same thing. Any help? Thanks!
JUL 20, 2015 - 07:46 PM

TRM5150
Hello Jose, Yeah, the instructions are a bit shady in that section. In step 5 there is to small graphics at the top...one square and one round....the square one is correct, the round is not. The bolt heads are to be installed on the backside of the cylinders...facing the ripper. there are two different sizes. In this picture you can see where they go. I found it easier to make my own bolt heads, this is why they are white in the picture. 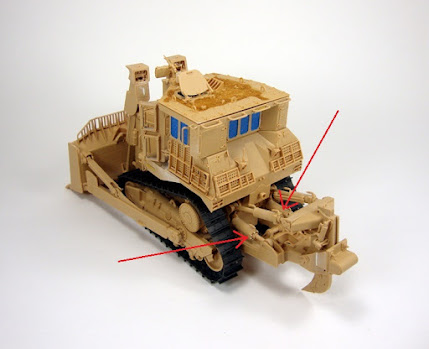 joseandujar
Thanks for the tip! I assumed that is the same procedure for step 37 also. Can't wait till painting, but I'm little concern about the tracks when I get to that step.
JUL 21, 2015 - 07:48 PM

joseandujar
In step 26 Tracks assembly, parts A5 and A6 is state use to finish the whole track. What they mean about that? I didn't see those parts in your pics unless you painted them black after finished the track. Also, do I supposed to punch a hole in part C2 to connect the link with C1?
JUL 23, 2015 - 02:32 AM

TRM5150
Hello Jose, Sorry for the delay. I am away at the IPMS Nationals in Ohio. The bolt heads were made using the RP TOOLZ Hexagonal punch and die set. As for the tracks, the written English in the instructions is a bit off. I have to assume they were meaning you need to finish the construction of the tracks. They are not too bad once you get going. No, you do not need to punch anything out. If you take the side with the post on it and lay it down so the post is sticking up, slide the next link over the post and attach the non-posted link to the top of the post via thin cement or CA. I put a tiny drop with a small paint brush on top of the post carefully and then place the small flat link on...the open end will slide down over the next post.....and so forth. I would go out about 10 links and then set that aside to dry and start another run. When I finished the 10, then I would put the track pads on after letting them sit for maybe 10 or 15 minutes. If don correctly...and the glue is on top of the post the links will be working. Like I said...it get easier once you start. Best of luck!
JUL 25, 2015 - 03:10 AM
Go to Forum Topic
Copyright ©2020 by Todd Michalak. Images and/or videos also by copyright holder unless otherwise noted. The views and opinions expressed herein are solely the views and opinions of the authors and/or contributors to this Web site and do not necessarily represent the views and/or opinions of KitMaker Network, KitMaker Network, or Silver Star Enterrpises. All rights reserved. Originally published on: 2014-05-01 12:47:58. Unique Reads: 19305