JPTRR
Editor
posted on 3 months ago — updated on 2 months ago
1,155
views
In the 1980s, Monogram Models put together an industry presentation of the process of making a plastic model, from concept to the finished product. This is the first part of that project. 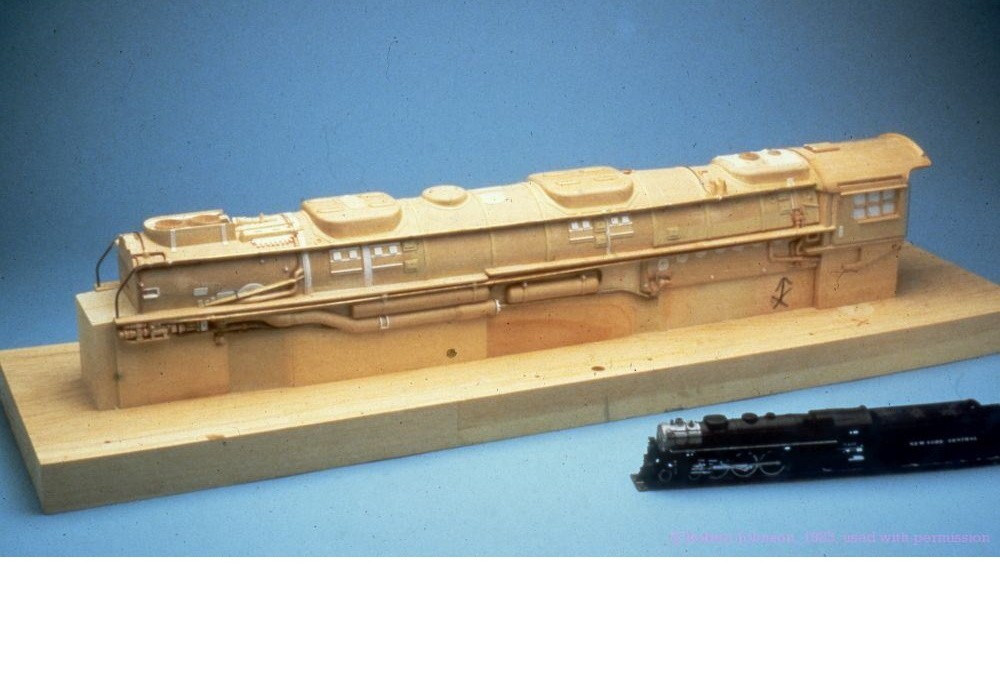 Recently I was lucky to make the acquaintance of Mr. Robert Johnson, who started with Monogram Models in November of 1973, several months after departing the USAF.  Lieutenant Johnson spent two TDY's to Guam in 1972 with the 99th BW in response to the North Vietnamese March attack against South Vietnam.   He served as a Flightline Maintenance Officer working 50 - 52 B-52Ds, 12-hour shifts, six days a week.

"Bob" has shared some fascinating stories of the hobby history, including what happened to Aurora molds and tooling, industry finances, and other "peaks behind the curtain."   But those are stories for later, and they will be posted.

Bob was hired at Monogram as a Junior Draftsman.  He told me,

I held a BS in Product Design from the Institute of Design at IIT, and had been a lifelong model enthusiast.   When I began, I was assigned to an experienced Engineer.  That was how the "drawing staff" was looked upon.   George Baskys was completing the P-61 "Black Widow" and I helped drawing simply flat parting line pieces - upper guns, seats, landing gear struts, clear parts.   I found that the four male and one female "Engineers" loved what they did, were greatly skilled, and had specialties.   George was aircraft and designed the P-61, B-17G, and B24-D/J.  Mario could design anything, Genevieve Gristetta was the "Classic Car Queen," and so on.  As a "new guy", I was a "Gear Shift Guy".   My first three designs were the dump body for the Mack AC Bulldog, 1/72 Fairchild A-10, and F-86 Sabre.

Monogram Models was a "FAMILY" and we formed what I consider to be the best creative team in the business at the time.   George left after the B-24 in late 1976.  He was replaced by Clark Macomber and shortly thereafter, Dave Jones.   All three of us were ID grads and into "the hobby."  Clark created the HO Hudson and Big Boy kits.

Our model shop headed by Joe Sojka were the "unsung heroes," it did not take long to realize that you can do anything on paper 2D.  The fellows who made it "look right" were the pattern makers.   Read what modelers write about Monogram kits on the FB page, the "look" is often the key to what they see, and it was achieved through folks with highly-trained eyes.   Like Aircraft Maintenance where the Aircrews get the Glory and the wrenchbenders make it possible, designer take the credit for a kit, but the folks shaping the patterns make it "work".  That is the TRUTH!!

Where my difference came in was that as the "New Guy", the older staff handed off their "extra duties" to me.  It started with approving inspection boards of new kit parts and pieces needed to make a complete kit, plan, decal.  Then processing new mold approvals for new projects to Plastics, Finance, and Production, thence maintaining the Parts Lists updates for the entire product line and creating Costing, Preliminary, Final, and Production parts lists for new items.  That brought me into the overall Costing Process.   I did not complain because it was no different than being a 2nd or 1st Lt and doing everything from manual currency to keeping the coffee hot and fresh.   This all enabled me to grasp and become well-acquainted with the entire financial and production process.  By 1977, I was Assistant to the Director of Design (Clark).  I convinced Bob Reder to change the title and then in 1981, the first Hobby Product Manager; all department heads reported to me on anything related to all products.   That caused some indigestion but, my goal was to simplify their lives and take on responsibility.  Clark was one of our best design guys, he had an interest in all subjects.  He and I created the NASCAR kits in 1983, new Buick Regal and Ford T-Bird with 2 different chassis.  We managed every aspect and I handled the licensing, PR, ad placement, finding Dave Lord to do box art and more.   Man, by 1991, that series had brought in $13 millions dollars to Monogram!!

Reder had this idea to create an HO scale locomotive, a Hudson.  The idea was a highly-detailed model that could sit on a layout, in a siding or in a park, for a fraction of the cost of a Rivarossi locomotive - that kit was a success!!  Then Clark created the Big Boy!!   Our hope was to create a Burlington Streamliner...we did not get there.   In 1985, I did a whole photo presentation titled Monogram Builds the Big Boy for the IPMS national Convention.

That is a glimpse into Mr. Johnson's background and intimate knowledge of the industry.  It also sets the stage for the story of how Monogram created their SR-71 Blackbird - that is for a later story, let's get back to the subject at hand.

The following is the presentation.  I will post Mr. Johnson's captions with the photos following.

At the urging of Monogram Vice-President and co-founder, the potential of developing a 1/87th scale replica of a Hudson steam locomotive was studied during late 1980. The concept was to develop an easily-assembled model that possessed accurate exterior detail and would serve as a non-powered display model.  Snap-together construction was selected for ease of assembly with full knowledge that parts would be glued together. The success of the HO scale Hudson spawned the ALCO "Big Boy" project. 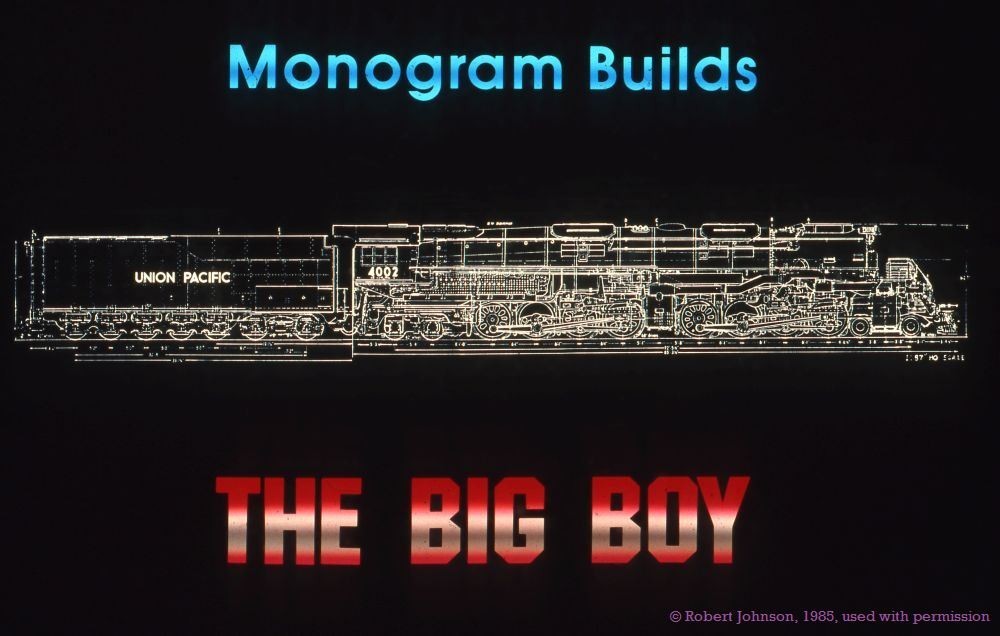 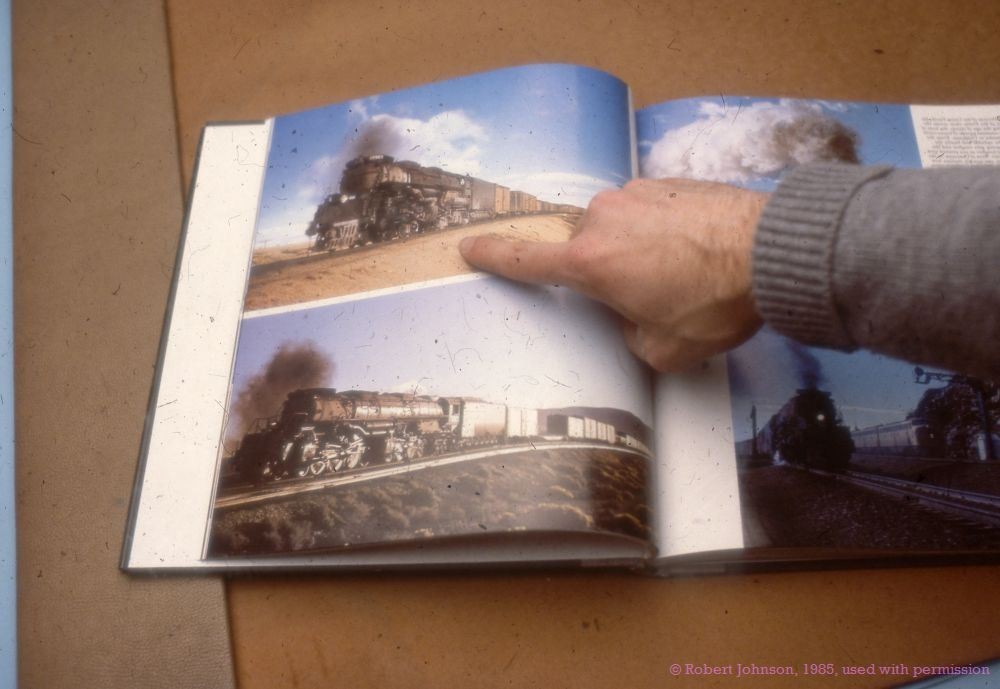 Clark visited and took hundreds of detail photos.  Museum staff supplied him with a manufacturer's scale drawing to use for reference. 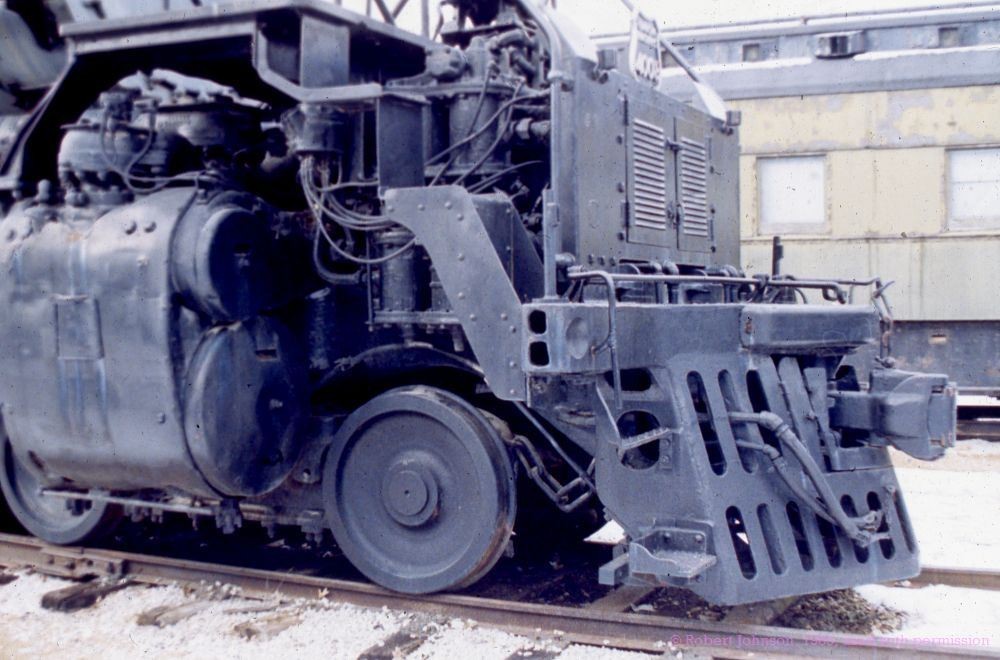 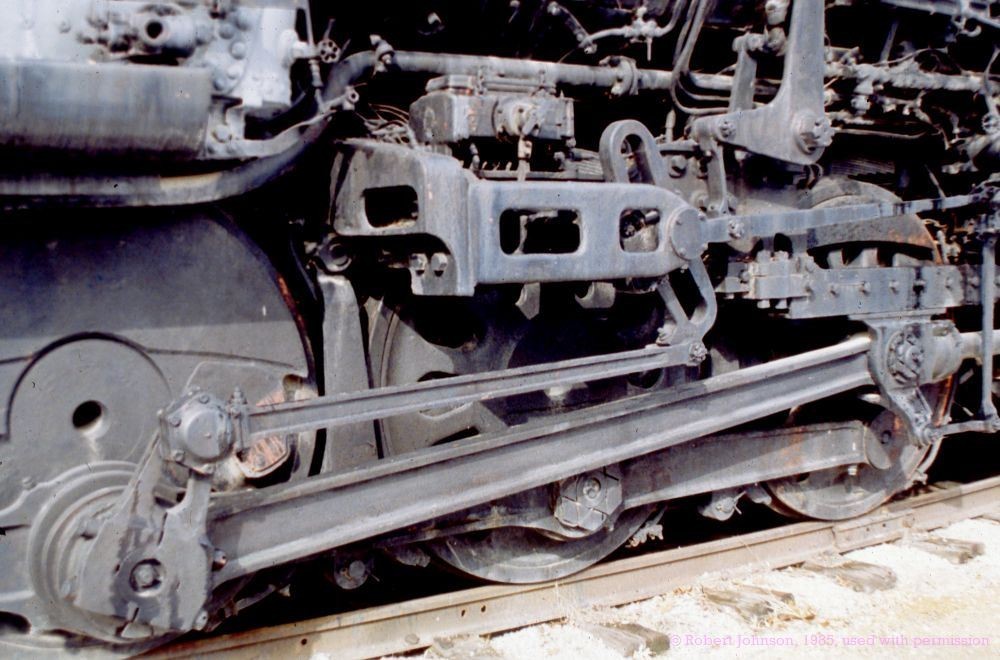 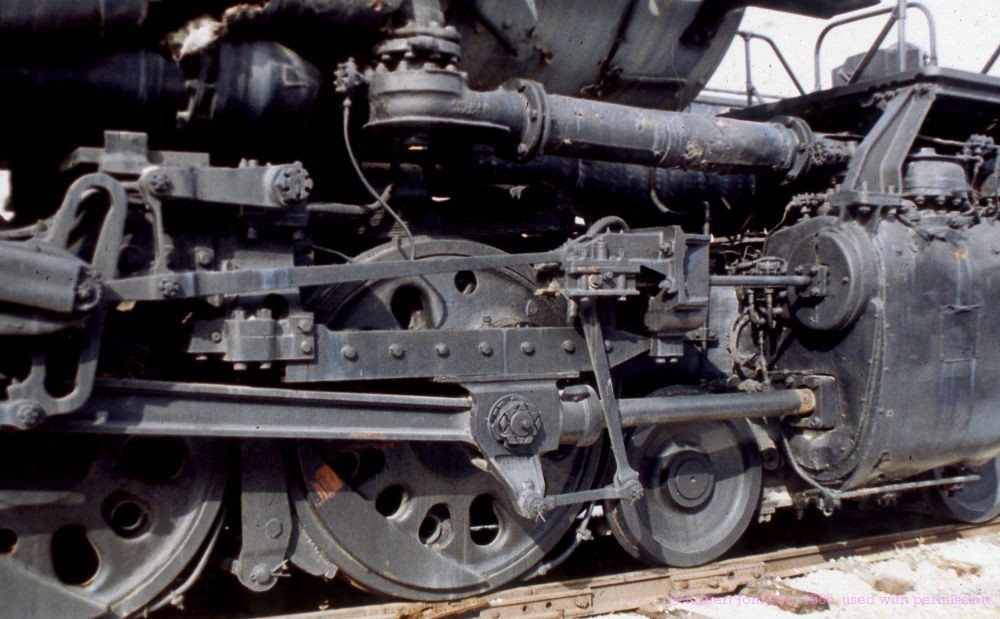 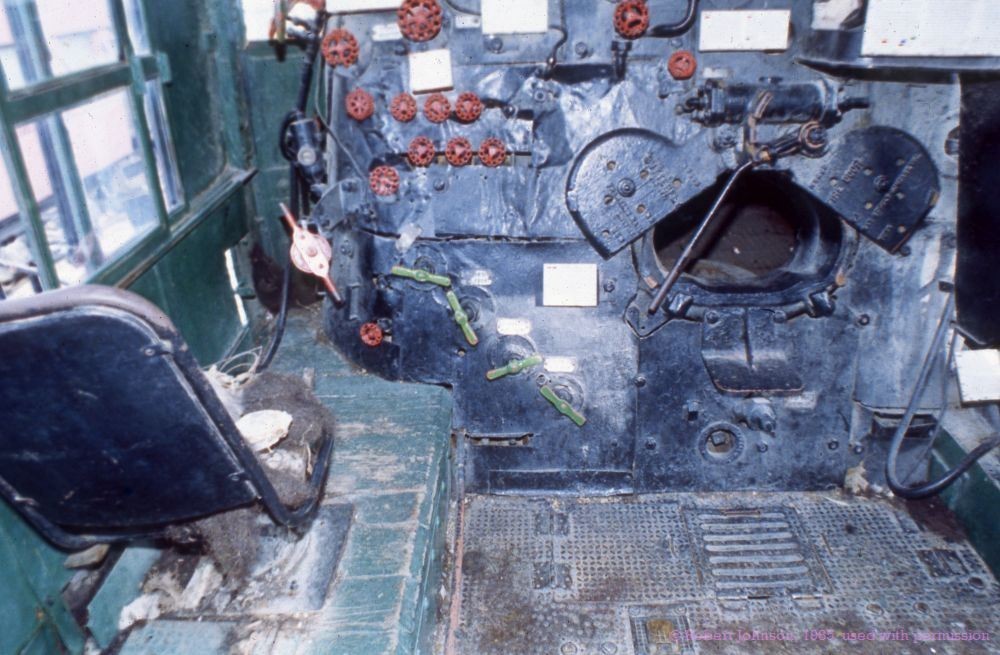 Clark Macomber working on part drawings.  My memory is that most of the main parts were drawn "3X," or 3 times larger than the final molded part.

The photo boards contain four photos per panel.  We used white box board that was the same as the printed box stock.  A set could be used by design and pattern staff at the same time.   Pattern sizes were selected based on the size of the molded part.  Usually, a project would use 2X patterns with 4X for detail parts.  3X was the maximum size that could be indexed on our Deckel pantographs - it was "tight"!! 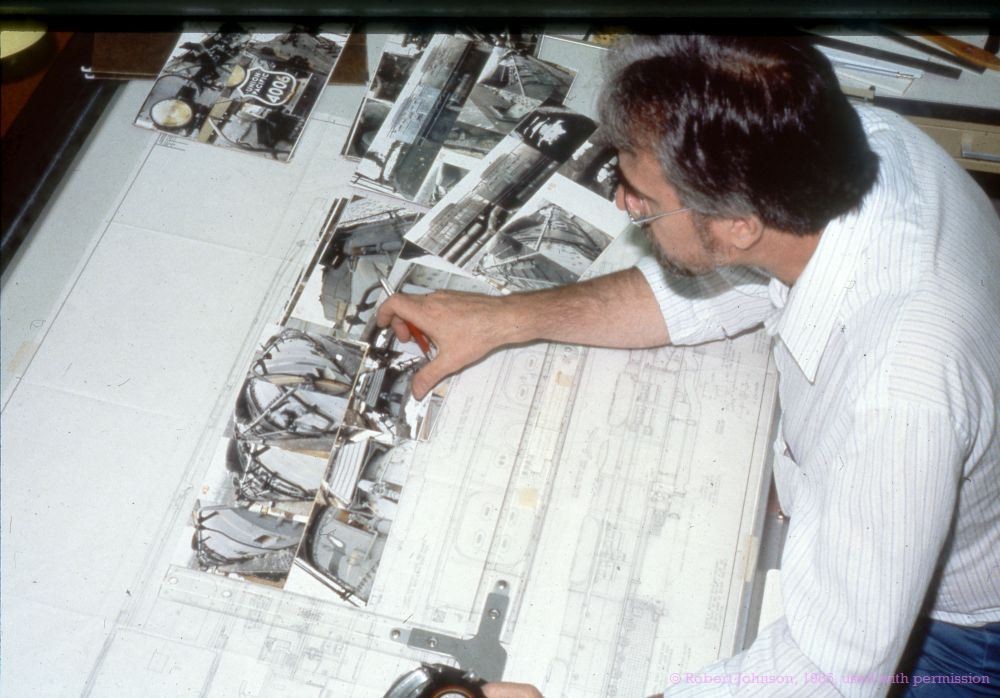 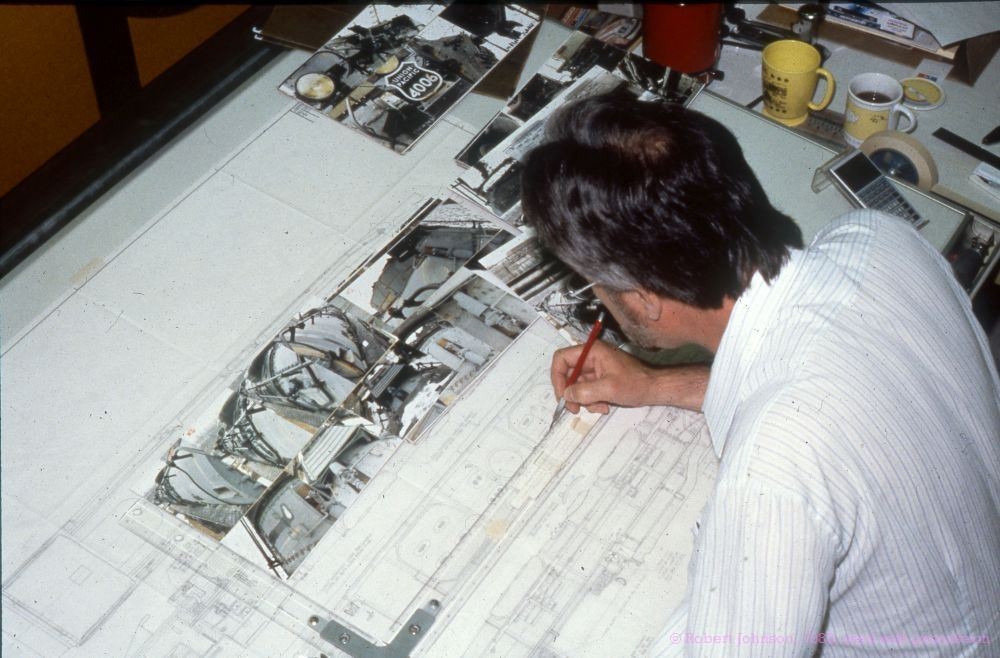 This is a 3X drawing for Part No. 1, Boiler.  It is the main body part and used a Cavity, Core, Left Side Action, Right Side Action, and Front Action.  It was a complex part and the major part in the Gray Parts Mold. 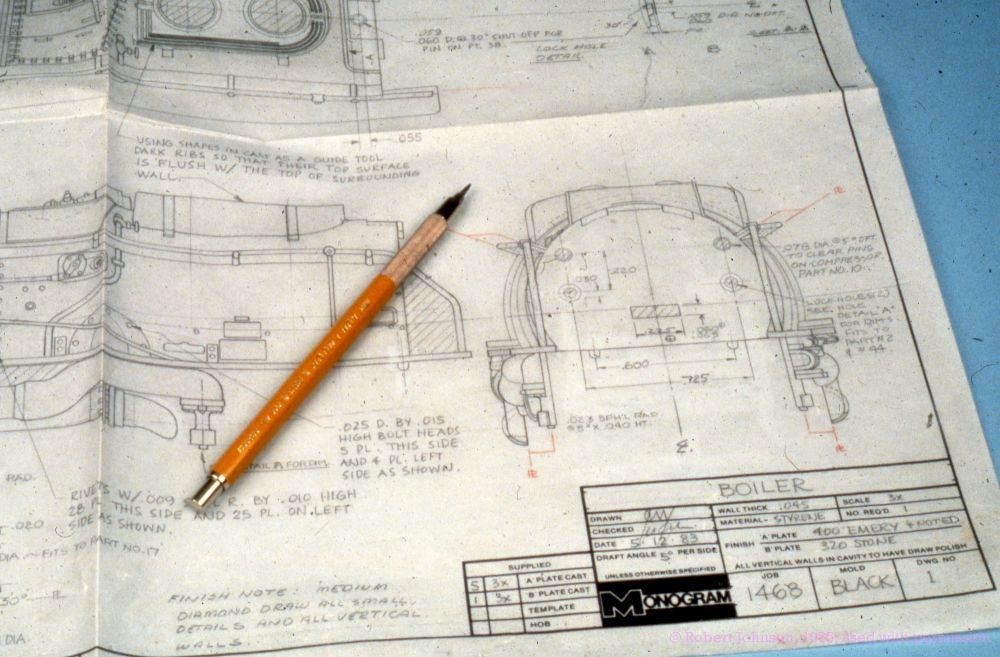 This shows the Parts List, many of the Scale Part Drawings, and the 3X model for the Tender.   I have the Tender pattern as Clark saved it.   Usually, these patterns were destroyed in the process of making the laminate polyester resin tooling casts. 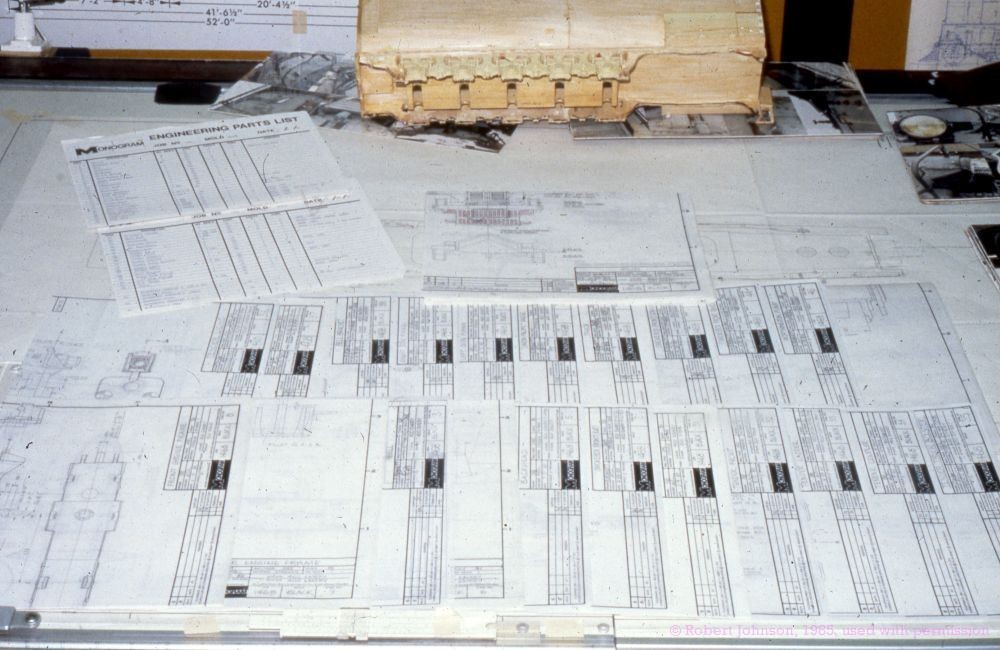 The hands of Ted Dobson seen applying polystyrene sheet details.  Plastic sheet worked well for this due to uniform wall thickness.  The Main Boiler and most other parts were crafted in BASSWOOD.  This was a well-known softwood for carving and shaping.  The surfaces were sealed with lacquer.  "Draft" was an important part of component design that few modelers know about.  In order to remove the molded parts from the injection mold, draft angles on all surfaces 90 degrees to the direction of mold travel are angled from 1 degree to 3 degrees.  This enables the parts to be ejected from the mold.  It was necessary to ensure that all parts remain on the CORE side (where you see those "pesky" round knockout marks).

This was done by using less draft on the CORE side to help retain the molded parts. 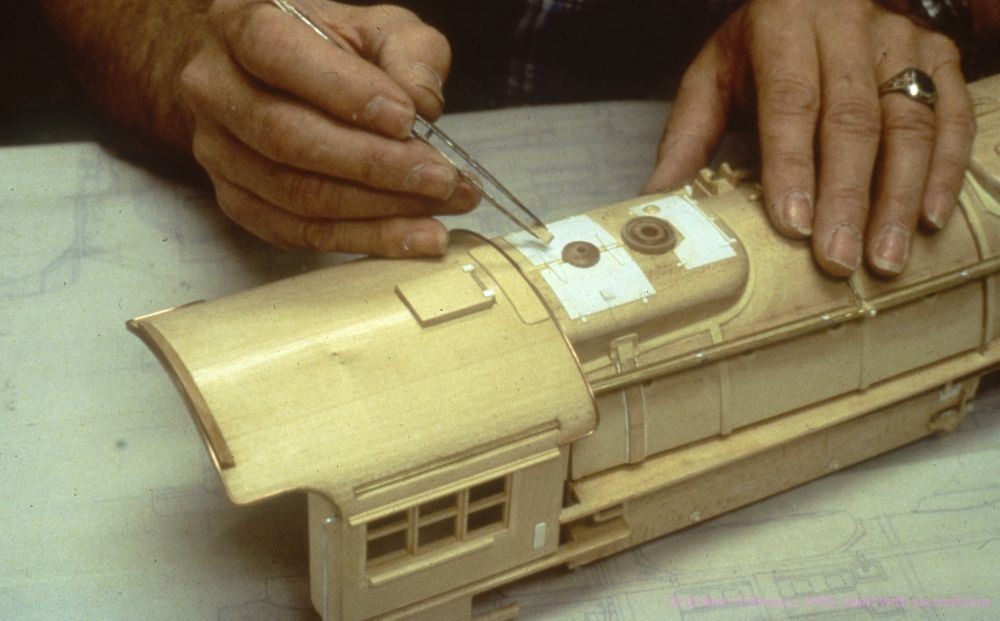 Ted Dobson "sights" the Boiler.  The entire process of creating patterns requires close attention to part drawings and reference photos.  The third dynamic is "eye," the pattern has to look "good to the eye".  That is a skill developed over years of pattern making and most often "lost" in 3D CAD projects that can have a very "mechanical look".   3D CAD removes the "artistic value" that a designer can add as CAD is math driven on X, Y, and Z axes. 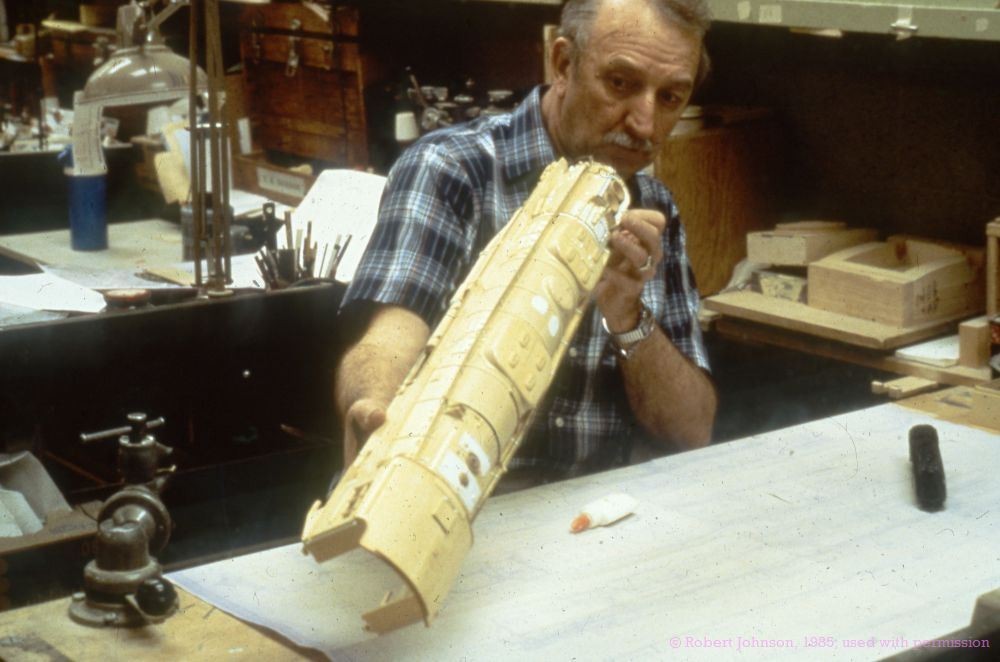 The process of making tooling casts involves enclosing the wood pattern in a "box" formed from BASSWOOD.  The pattern that has many hours of creative skill invested is NOT the end product; that is the Tooling Cast.  This is the assembly of the tooling cast layup in 3X for the Boiler. The model at lower left is the HUDSON locomotive and displayed for relative size between a 1X /87th scale assembly and a 3X Pattern. 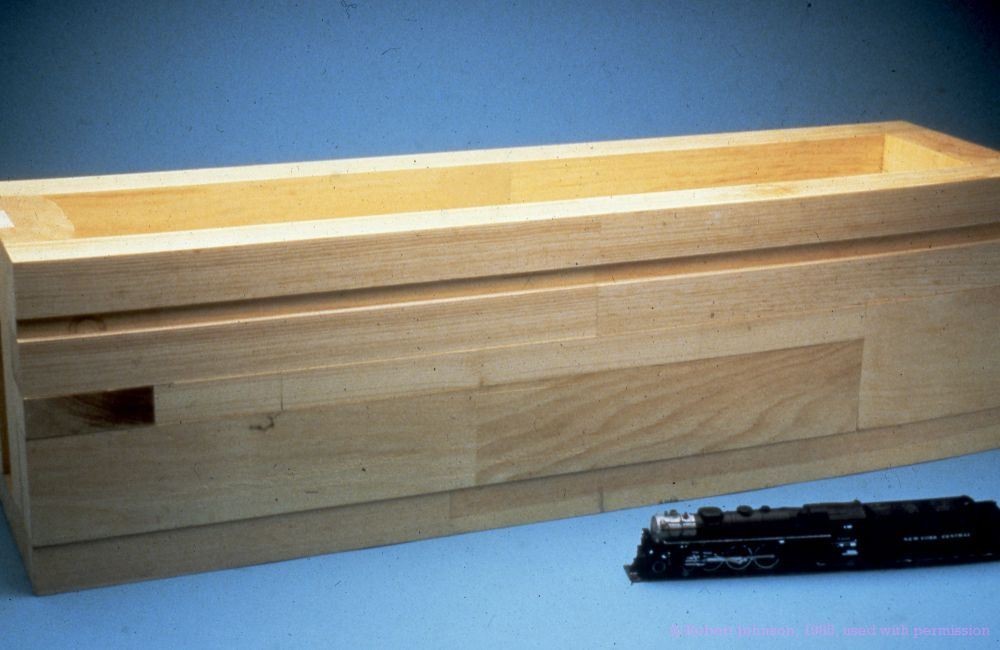 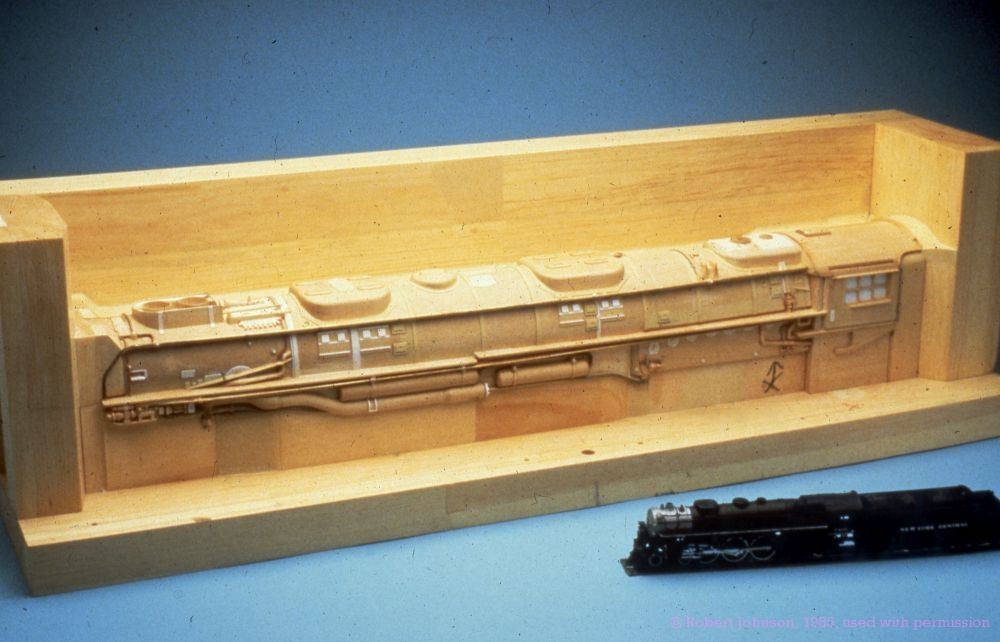 The Boiler part mounted on the CORE Block.   It is a rare opportunity to see the designer and patternmaker's art at it's very best!! 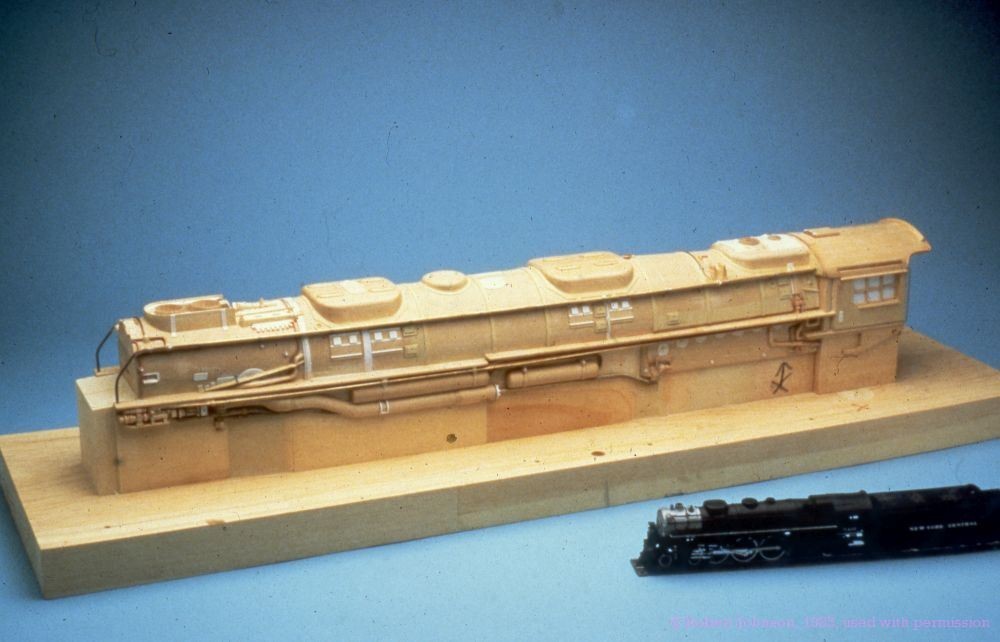 Over the next few weeks I will be posting his great stories and the rest of Monogram Builds the Big Boy.  We are incredibly fortunate to have Mr. Johnson to share these insights and stories.