JPTRR
Editor
posted on 5 months ago — updated on 4 months ago
1,747
views
Hot off the press and on the heals of the previous history of Monogram and Aurora model companies is this correcting the record of the latter's molds disposition. 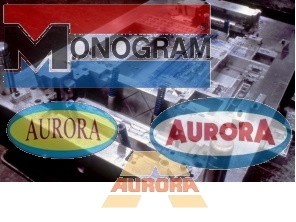 Even notice how learning something only creates more questions?   Since publishing Model Industry History: Monogram Acquisition of Aurora Mold Sets, some questions and speculations arose about the rest of Aurora's molds.  Former Monogram executive Bob Johnson consulted his industry friends and continues the story.

Ever since the mold inventory from Aurora Plastics Corporation was acquired by Monogram Models in the late 1970, there have been no end of rumors and speculation from the "infamous winter train wreck" (fact) to the disposition of various tool set over the following years. Even reading the description of the trials and tribulations of Aurora on Wikipedia carry no mention whatsoever of the purchase of some tool sets by Monogram during 1977.   By early 1978, internal records of Monogram Models, Inc. indicate that approximately 740 molds +/- were shipped to Morton Grove, Illinois.  The quantity damaged beyond repair was less than 30 molds (assessing a "mold" as the cavity and core halves even if separated in the train wreck) and that by 1979, as many as 500 molds had been scrapped.  In addition, 51 molds sets composed primarily of character figures and 12 various cars; likely in 1/32nd scale were not part of the sale to Monogram. Without question, any modeler who built Aurora kits in the 1950/s and 1960/s has a "favorite" from turquoise P-38 "Lightning" to the Douglas MB-2 mailplane, "Mod Squad" Ford Wagon, and the North American B-70. Those who built these kits as youngsters surely had different interests than senior management at Monogram whose primary goal was to acquire the Aurora molds and restrict further production primarily to ensure that existing retail shelf space was not given to large numbers of reissued Aurora subjects from a potential new firm. The potential for reissue of vintage items that were looked upon as less detailed and less accurate than new kit creations in the 1970's. It was a reality of what was already a shrinking market.After 1990 or 'thereabouts' there were beliefs among the modeling community that Aurora molds stored initially at the Monogram facility in Morton Grove and relocated when Revell-Monogram changed ownership and moved to Northbrook, Illinois, and then moved a third time under Hobbico ownership when offices were moved to Elk Grove Village, Illinois. Between that time and the Chapter 7 bankruptcy of Hobbico in 2018 and the sale of Revell assets to Quantum Capital Partners in Germany, only one Aurora mold set was sold; a duplicate 1/32nd scale Batmobile that was sold to Polar Lights. Other firms may have marketed kits based on Aurora molds, but, that process utilized bagged assemblies produced in the Morton Grove facility. The sale and purchase of bagged assemblies is a common practice in the hobby kit industry, and has been for decades.Throughout the period from 1991 through the closure of Revell in 2018, ownership and management changed... but, one constant was the Product Manager who worked with several firms that purchased bagged assembly items from the overall Revell mold inventory.  Following the purchase of Revell assets in the USA and Germany, "interests" for the German buyers specified molds held in China and the USA that they wished to retain for future production. There were a number that were not selected and those were set aside to be scrapped. Knowing that this would see a number of vintage mold sets from Monogram, Revell, Aurora, and Renwal disposed of for material value only, Ed Sexton saw the value in selling a quantity of the remaining molds to a viable buyer; Atlantis Model in New York.   Fortunately, these principals saw potential in future production from most of the molds scheduled for destruction and a business deal was negotiated. Those that remained were transferred to Atlantis; a major undertaking all its own.

The past year has seen the limited production of vintage kits that had not been produced in years.  If you appreciate what Atlantis is creating, support them with purchases!  We need to thank Ed Sexton along with the cooperation of Lou Aguilera, President of Revell USA, that a "quick sale" to a junk dealer did not happen.  While Ed worked with principals at Atlantis Models, Lou negotiated with the new German owners to achieve an acceptable solution. Their foresight to find a small firm that was (and is) committed to work hard to survive in a very different hobby market is not only laudable, but, provides future kits from vintage molds that otherwise would have been lost.   That is happening all too often these days.   Peter Vetri and his partner are taking on a massive challenge that goes way beyond what you see when a new Atlantis kit makes its way to a retail shelf.

Hopefully, this provides facts that refute the "what ifs"..... and before anyone asks, there is a list of what was purchased and that remains the confidential property of the new owners.  Support them all that you can!!  Better to buy vintage kits!!