JPTRR
Editor
posted on 6 months ago — updated on 2 months ago
1,872
views
Remember models by Aurora Plastics Corporation? Recall they went away in the mid-1970s, and Monogram bought them? Ever wonder why many kits were not reissued, and if the legendary train wreck that destroyed tooling actually happened? This will set the record straight. 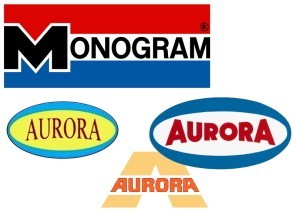 Recently, I was lucky to make the acquaintance of Mr. Robert Johnson III, who was with Monogram Models from 1973 into the 1990s.  He started as a junior draftsman and worked his way into the planning and decision-making realm.  You can read a fuller bio of him in the feature :

"Bob" has shared some fascinating stories of the hobby history, including what happened to Aurora molds and tooling, industry finances, and other "peaks behind the curtain."   But those are stories for later, and they will be posted.

Brighten up your screen and enjoy his recounting of Monogram and Aurora.

The purchase and disposition of Aurora mold sets by Monogram Models, by R. A. Johnson III

For decades, "urban myths" have grown up around the acquisition of mold sets and reference material from Aurora Plastics Corporation by Monogram Models Incorporated in 1977.   With each passing year, more of the people involved with this transaction, Ken Merker, Roger Harney, Bob Reder, and Tom Gannon Jr. leave this world and their insights are lost.  It is quite easy to look upon that transaction in the light of adult modelers and collectors as opposed to the period from 1973 through 1980 that was very challenging economically and culturally in the U.S.   These "times" had a direct and lasting impact on Aurora and Monogram Models.   Decisions that affected the future of the toy and hobby industry in 1977 may seem to be quite difficult to understand in 2020.

1973 marked the beginning of the OPEC Oil Embargo that led to long lines at gasoline stations from coast to coast.  It also caused shortages and significantly higher prices for Polystyrene plastic pellets that was the main production plastic in the hobby kit industry.  A common problem confronting kit manufacturers was finding supplies of virgin material as unscrupulous distributors adulterated plastic stock with ground calcium carbonate; often to the degree that common plastic solvents used for part assembly had no effect on the molded parts. This was a challenge at Monogram that had fairly reliable suppliers and I have no doubt that this situation affected Aurora as well.

Monogram acquired a new President in 1975. His previous experience in the hobby kit business came from his years at AMT and he was the main impetus behind more modern manufacturing processes at AMT as well as starting the development of  1/25th scale heavy-duty truck models.  Thomas Gannon Jr. looked at the hobby kit business quite differently than Jack Besser, his predecessor who was a Monogram Models founder.   Tom became aware that the mold inventory of Aurora Plastics Corporation was offered for sale sometime in 1976.  He and Bob Reder traveled to Long Island late in 1976 to inspect the items offered for sale. Tom worked with the owner of Monogram Models, Mattel Incorporated to negotiate the offer. My belief is that this was presented to Ray Wagner who was President of Mattel from 1973 until his resignation in 1983 and the person directly responsible for hiring Tom.  Subsequently, the offer was accepted, and it is my understanding that the purchase price was between two and two point five million. This cannot be confirmed these days to the best of my knowledge.  The funds from Mattel were in the form of a short-term loan and repayment was expected using the newly-purchased mold sets to generate revenue.

The primary impetus that drove this purchase was quite interesting and very different from anything I have read or heard from various pundits. By 1976, Monogram Models' two largest customers were K-Mart and Toys-R-Us.  These two firms accounted for more than 50% of the annual kit business for a number of years. The annual volume derived from these two customers was driven by allotted shelf space for each hobby kit supplier and the rate of sale  ( or "turns") on a monthly basis. Holding or slightly increasing shelf space by inserting new product while closing out dated product and increasing the rate of sale per SKU (stock keeping unit) were the metrics that were crucial to these two customers.  The main buyers expected the very "best product" on their shelves. "Best" was defined as what sold the most in volume.

Tom Gannon believed that the availability of a large inventory of injection molds provided an opportunity for a toy company (such as Ertl) or a hobby company looking to expand their product base (such as Testor) to purchase the Aurora mold inventory and develop a comprehensive product line that could be offered to these mass merchant customers at a significantly lower price than what K-Mart and Toys-R-Us were buying from their major suppliers.  That potential change in business would have proved detrimental to the established suppliers and their employees.  In fact, Tom's plan was literally a "blocking move" to prevent a new supplier from coming into the market with inferior product at  lower prices.  It is vital to understand that these two mass merchants were far more interested in "their item cost" and applicable manufacturer discounts than specific subject matter.

The funds used to finance the Aurora purchase by Monogram Models was achieved through an intercompany loan from Mattel to Monogram.  It is possible that Mattel was the actual buyer, but this is lost to history.  It would be repaid by scrapping mold sets determined to be of no market value and identifying a range of Aurora molds that could be added to the Monogram product range.  We had two internal teams; one in Engineering that reviewed the inventory list and highlighted items that had potential for use in the Monogram product line and a second that was items that could be scrapped.   The second team was in Tool Engineering and they assessed tool quality once the molds were received.  The "initial pass" to identify molds to be scrapped included non-scale 1950's/1960's aircraft, early cars, and "sensitive" character molds like the Guillotine. The second list included  molds to be opened and inspected for quality such as the 1/48th WW I aircraft, 1/48th A-7 and F-111A, Dinosaurs, movie characters, 1/48th scale armor, selected 1/24th scale cars, and marine / naval subjects.

One of the "limiting factors" that people do not consider is the amount of storage space required for a massive number of injection molds and the business consideration that if they are not "productive", why retain them?

Yes, there actually was a train derailment during the Winter.  We received halves of molds that had hit the ground with a velocity enough to shear 2" diameter "pecker pins".... cavities and cores were damaged... and some of these molds were frozen in ice and solid mud to the extent that it took as along as two days for these damaged blocks of steel to "thaw out" and return to room temperature in the Monogram warehouse in Morton Grove.

At this point, the Tool Engineering team focused on what molds had been damaged or destroyed in the impact following the derailment.  What became obvious was that the inventory of damaged and undamaged molds had obvious shortages.  100% of the Aurora tooling purchased was not received in Morton Grove and the actual locations of the missing tools were never resolved.  I have read a comment that Bob Reder acknowledged that not all of the Aurora molds were received.   In my years working with him, I never heard him make that statement, but there were items on the inventory list that simply did not arrive in Morton Grove, Illinois.

As damaged molds arrived and "thawed out", an interesting aspect began to take hold.   Aurora molds used a large number of beryllium copper inserts.  These were mostly figure or character molds where 1X patterns or sculptures were created. This material had a much higher value than the usual P20 tool steel used in model kit mold cavities and cores, a fact further complicated by the reality that many Aurora mold inserts had been "hardened" to a Rockwell value of 50 or greater.  Our Tooling Director, Ken Merker, referred to them as "kryptonite".  This asset grew into what I referred to as a "feeding frenzy" whereby the search for BeCu inserts surpassed taking time to assess the value that the mold set possessed for future production.

In the end, a sizeable insurance settlement was received for the damaged molds that were involved in the derailment. There were several "losses" that were regrettable, but, the cost to build new mold bases and "fix" the damaged inserts was beyond economical repair.  The process of scrapping the damaged molds, molds determined to be of no further use, and the funds received from insurance coverage yielded more than 50% of the loan value from Mattel.

The initial sets of molds that were identified for use included several WW I aircraft and various scale airliners that included the Boeing 727-100, 737-100, 747-100, and DC-10.  None of the external surfaces included line detail of any kind and an obvious upgrade would include the addition of raised panel lines.  That simple task became a major challenge after discovering that the cavity inserts were hardened to a degree that made adding panel lines by engraving virtually impossible.  An effort was made to carborize one of the fuselage inserts from the DC-9-100, but, it warped during the process... The only way to add detail was by acid-etching.

The end result was that a number of Aurora molds were placed back into production and the entire process of purchasing, moving, and inspecting the sets designated for production was worthwhile.   A small number of molds sets: four airliners, several WWI designs, and the Vought A-7 and General Dynamics F-111A were placed into production.

Those who decry the loss of vintage Aurora molds actually did not know of or understand the "bigger picture" that motivated the purchase of the Aurora molds so many years ago.